Mini has revealed an advanced new concept car to celebrate the 100th anniversary of its parent company, BMW.

Named the Vision Next 100, the compact four-seater showcases a new design lineage that shuns the retro look of today’s Mini models for a cleaner appearance. It has been developed in response to what the company describes as "an ever more digitalised and interconnected world".

The Mini concept - which has been unveiled alongside a Vision Next 100 concept from BMW stablemate Rolls-Royce - also highlights Mini’s ambition for future models to offer personal mobility, using the latest in autonomous driving and digital intelligence technology.

The Vision Next 100 can collect its driver from a desired location in fully automated fashion and adapt itself to pre-programmed personalised preferences before it arrives. 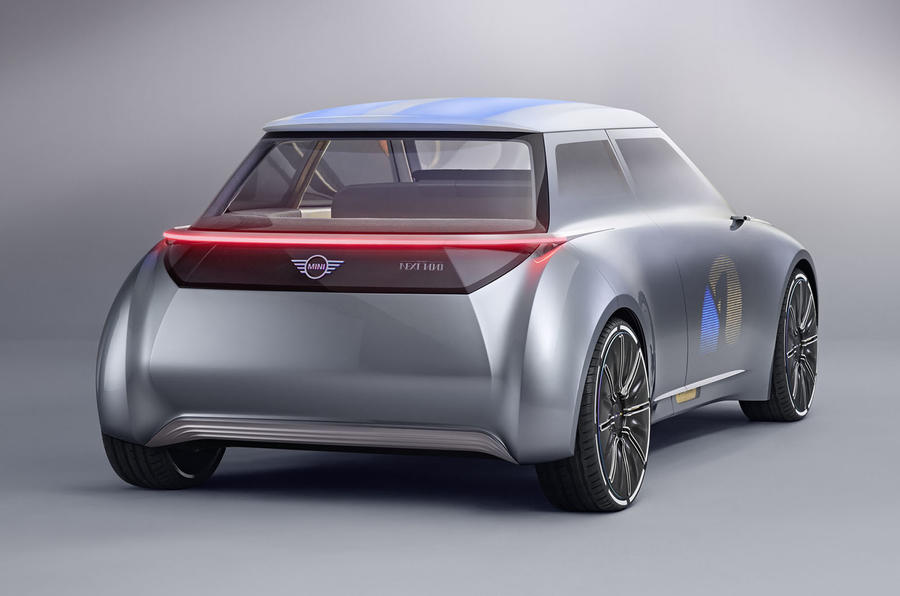 Hinting at a broadening of its short term rental activities through the Drive Now program, Mini design boss Anders Warming said, “Our latest concept looks to offer bespoke personal mobility. In the future you might not actually have to own a vehicle to enjoy the benefits.”

Mini also says autonomous driving technology will allow future models previewed by the Vision Next 100 to travel occupant free to a charging station, car wash, garage or the next user.

The new Mini concept adopts a one box silhouette without a defined bonnet but an elongated windscreen. The stubby front end is distinguished by graphic that reinterprets Mini’s classic hexagonal grille and round headlamp treatment. Further elements include thin led lamps out on the leading edge of the front fenders, prominent wheel houses, high belt line floating roof and a full width LED tail lamp incorporated into a subtle rear spoiler. Wide tracks and minimal overhangs help provide an aggressive wheel at each corner stance.

Despite a heavy focus on digital virtues Warming says analogue qualities will become increasingly important in providing cars with a premium air in the future.

To this end, it receives two piece wheels, in which the outer surface remains static and a disc behind it rotates with the tyre. “The idea,” says Warming is make each wheel look like a piece of mechanical jewellery. 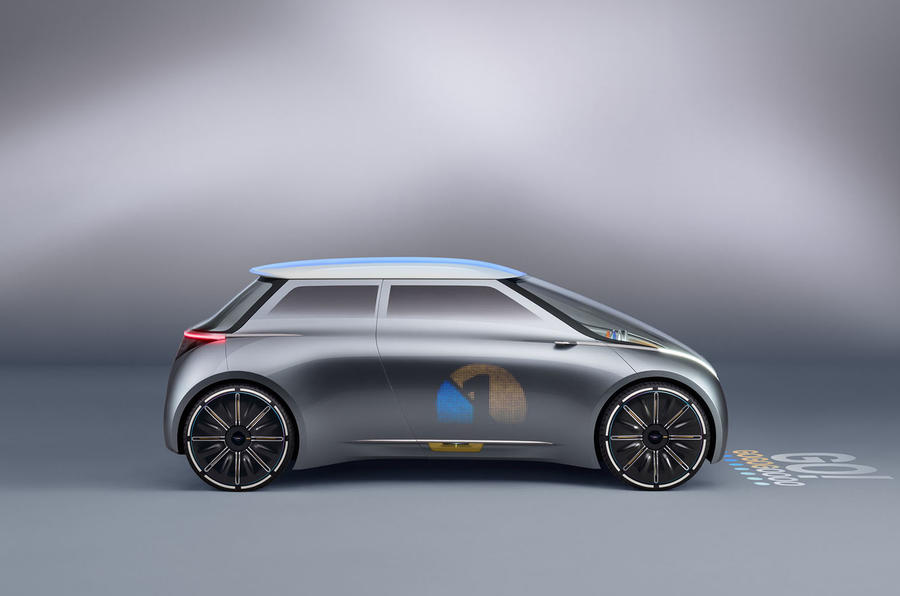 Holding true to the time-honoured Mini maxim of providing the most space possible with the smallest possible footprint, Mini’s design team has succeeded in providing the Vision Next 100 with a body described as being “not so far removed from the first Mini back in 1959” in terms of overall size.

At 3620mm, the Vision Next 100 is 560mm longer than the original Mini but 270mm shorter than the current Mini hatchback.

The length is significant, as it once again previews plans for a smaller Mini model positioned beneath the existing hatchback, following on from the earlier Rocketman concept.

The compact dimensions are a result of a reduced need for crash zone deformation in future models owing to the adoption of a zero emission drive system mounted at the rear without the bulky mechanical components of a conventional combustion engine sitting up front. 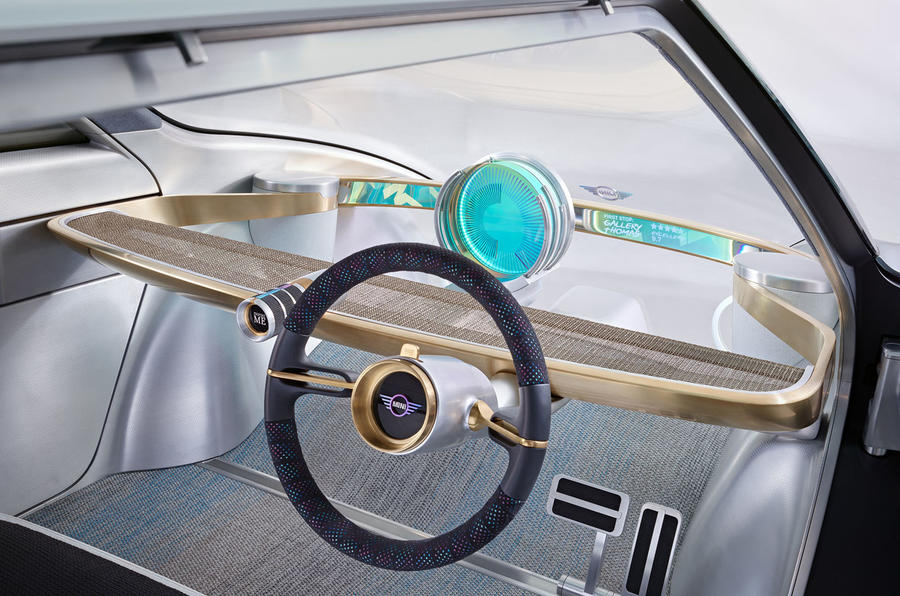 Mini has not made any firm assertions on the drivetrain used by the Vision Next 100, although officials at its unveiling in London acknowledged the company is working on various electric solutions using the technical know-how of its parent company, BMW.

No stranger to the electric car ranks, Mini launched its first zero-emission model, the 200bhp Mini-E, back in 2009 as a part of a development program that preceded the establishment of BMW’s i brand and the launch of the i3.

Fitted with a 35kWh lithium ion battery, the Mini-E provided a claimed zero emission range of up to 100 miles. 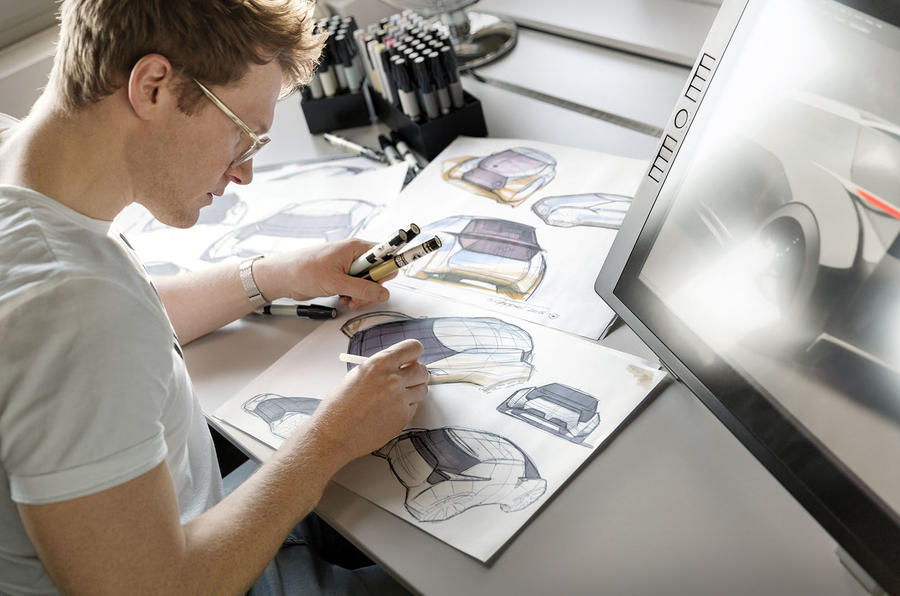 Despite the emphasis on autonomous driving technology and personalisation, Mini says future models will continue to offer the characteristic driving experience offered by today’s models, describing the Vision Next 100 as “small and nimble”.

“A Mini must still be fun, to the extent that drivers will prefer to drive themselves – as often as possible,” says Warming.

As part of the emphasis on manual driving, Mini has provided its new concept car with a so-called John Cooper Works performance mode, which it says will take the handling characteristics of future models to a new level.

Inside, the Vision Next 100 previews much cleaner and far more simple interior to future Mini models than the over adorned interior used in various models today. There’s an uncluttered look to the dashboard, which relies on augmented reality to display a range of different functions on a series of high definition monitors set well back underneath the windscreen, including the information about the route and, when requested, the ideal driving line.

To enhance the feeling of width within the interior, the new concept car adopts a front bench seat and a full width footwell. According to Mini, this allows ease of access from both sides of the car and makes getting in and out in busy urban environments easier than experienced today. 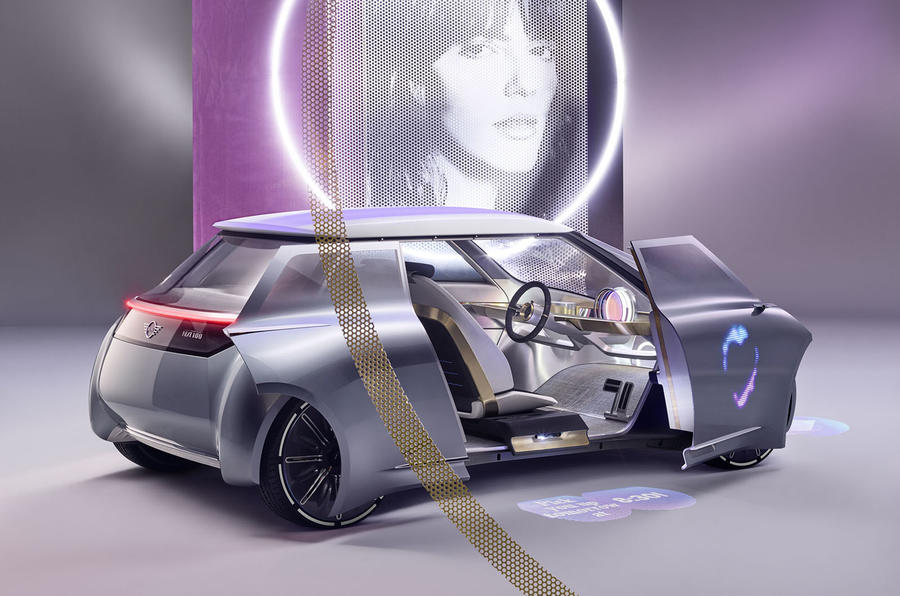 To switch from autonomous driving to manual driving mode, the driver moves the steering wheel from the central position to either the left- or right-hand side, depending on where he/she has chosen to sit.

The centerpiece of the interior is the so-called Cooperizer. Incorporated in large centrally positioned circular instrument styled to resemble the central round dial of original Mini models, it allows the driver to choose differing set-ups for a range of functions, including the autonomous driving, entertainment and communication systems, as part of efforts to provide greater personalisation. Depending on the set-up that is chosen, the Cooperizer then lights up in a range of different colours.

By pushing an “Inspire Me” button, the driver can also access digital data relating to his/her location or route. When the Vision Next 100 detects a suitable driving road, it allows the driver to switch into John Cooper Works performance model for ultimate performance potential.

With car sharing set to increase, Mini also says interiors will need to be more hard wearing in the future. Its latest concept uses a combination of recycled plastic and aluminium in the floor, roof and side panels. Steering clear of traditional materials such as wood, leather and chrome, the interior of the Vision Next 100 also includes brass, basalt and cellulose.

I am relieved to see the move

I am relieved to see the move away from cluttered styling, but can you imagine the cost if this fails MOT because of a chipped windscreen? Also it needs a glovebox and if it was any longer it would look like a lamprey.
jagdavey 16 June 2016

Not looking forward to the future.

Not looking forward to the future.
In a 100 years time cars will just be a relic of the past.
(like steam engines)
Movement of people won't be necessary.
The only cars on the road will be recreation vehicles styled to
look like classic cars of the 2010's.