BACK TO ALL NEWS
Currently reading: Opel rebuffs latest dieselgate accusation
UP NEXT
UK car finance tightened to become 'fairer' for customers

Opel has branded allegations aired by a German environmental organisation that the Zafira 1.6 CDTi emits levels of nitrogen oxides (NOx) up to 17 times higher than that prescribed under EU6 emission laws during rolling road testing as “false and unfounded”.

The allegations, made public in a press release issued on Friday morning, are based on a series tests carried out by the Bern Technical College in Switzerland under commission from the German Environmental Aid Association.

In its findings, the German Environmental Aid Association claims to have identified significant discrepancies in the emissions of the 118bhp 1.6-litre four-cylinder diesel-powered Zafira 1.6 CDTi (badged Zafira Tourer as a Vauxhall in the UK) during rolling road tests in which only the front wheels are turning and those in which all four wheels are turning.

Quoting results gathered by the Bern Technical College, the German Environment Aid Association said: “The measurements show that the vehicle behaves differently when the dynamometer is operated in four or two-wheel mode."

Furthermore, the German Environmental Aid Association says the amount of NOx generated by the front-wheel-drive Zafira 1.6 CDTi increases rapidly when accelerated to 150km/h (93mph) on the dynamometer in two-wheel mode.

The allegations aired by the German Environmental Aid Association has led to insinuations that Opel may have equipped certain models with emission manipulation software similar to that used by Volkswagen, or employed a defeat device that shuts off the injection of urea into the exhaust system at higher speeds.

Rebuffing the allegations in a letter issued to the media, Opel claims its own tests reveal the emission values of the Zafira 1.6 CDTi to be “absolutely correct and in accordance with the law”. 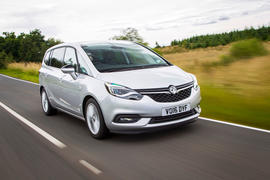 I'll continue to say it, I

I'll continue to say it, I dont see what the fuss is about, cars go into test mode during a test. What's the beef?
RPrior 24 October 2015

NOx is only an issue in Urban environments

The diesel engine is much more efficient than a petrol engine. Less Carbon emissions by a large factor. The more efficient the engine - the higher the NOx levels. As long as regulated NOx emissions are maintained in slow moving Urban environments there is zero issue.
superstevie 24 October 2015

If they've done the official

If they've done the official test legally, the fact that it pollutes more if driven in other manors isn't something GME need to answer to. They've donee hat has been legally asked of them. If you don't like that, tell your MP, MSP, or EMP so, and ask them to lol into it.
View all comments (10)