BACK TO ALL NEWS
Currently reading: Inside the industry: what future can we expect for the city car?
UP NEXT
All-new entry-level McLaren to be 600bhp-plus V6 PHEV

Inside the industry: what future can we expect for the city car?

Slight and quirky runarounds aren't dead yet, but innovation is required to secure their future
Share
Close
Share story

Death is always a shock, even when you know it’s coming, and last week’s revelation that the Skoda Citigo – and with it presumably the Volkswagen Up and Seat Mii – would not be replaced was very sad indeed. Such are the tight margins, city cars tend to be clever, quirky and compromised – and therefore easy to love. If the VW Group can’t make a single-platform multi-brand car like this work financially, then you have to worry for everyone else, too.

Last year, one senior industry boss told me that a manufacturer and retailer would celebrate taking £100 of profit each from the sale of such a car, and then live in hope of making a similar amount of money over the next three years on servicing.

The effort was justified by the ability of these cars to draw new buyers into the brand, the theory being that winning over younger buyers on three-year PCP deals would mean a proportion of them were subsequently hooked into buying more profitable cars. There’s a logic to that, although it doesn’t always work: the Fiat 500 has long been Europe’s best-selling city car, with the Panda not far behind, but alas you don’t see a lot of other, larger Fiats on the roads.

The bell has tolled for such enterprises as a result of the increasing encroachment of legislation. Rising emission, crash and tech requirements are making the cost of engineering and producing such cars too great. From an emissions point of view, the irony is clear: these lightweight, compact vehicles could and should be part of the pollution solution, but they are instead being forced out of production by the stringency of the law makers.

However, the city car’s not finished yet, of course. Hyundai/Kia have recently refreshed their i10/Picanto offerings, for instance. Others, such as Fiat, plan to extend the life of their current platforms for as long as possible, eking out profitability. Many more, such as Suzuki and Mitsubishi, will keep making the cars for less regulated markets. Others, led most overtly by the French, are letting more radical solutions permeate, most notably by breaking free of the auto regulators altogether.

Here, quadricycle regulations are sparking innovation. Far less stringent crash regulations, justified by the lower speeds of city driving, allow for a far lower cost of development, and the subsequent lightweight structures are also ideal for electrification. You could argue the Renault Twizy, launched in 2012, was ahead of its time. The near-identical Seat Minimo, revealed in 2019 and tipped for 2021 production, certainly suggests so. Meanwhile, the Citroën Ami has already been launched in some markets, at a rough cost of a £3000 down payment and £17 per month subscription thereafter. As ever, necessity is the mother of invention – if not always to everyone’s tastes. 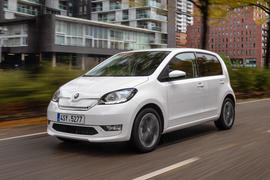 There needs to be a middle ground between current nanny state legislation and the continental quadricycle rules. Problem is manufacturers have been forced to try and design modern cars that are great in town yet can  cruise all day at 80mph.

To have the same regs for a large autobahn barge and a city commuter both in terms of safety and power train is ludicrous, Yet the cardboard box powered by a lawnmower regulations of the quadricycle law is equally mad.

We already have a quadicycle

14 September 2020
We already have a quadicycle class in the regulations.

The issue is that you need the same level of training and licencing to drive a quadricycle as a car and once you have a licence a cheap used car is always more desirable than a short range oddball machine.

The better longevity of modern cars also makes a used larger car more desirable than a new entry level one.

Regarding EVs economics to date have favoured larger more expensive cars as EVs are expensive to make long ranged and cheap to make fast.

We do however have a light weight EV that is likely to be one of the most used transport classes in the 21st century. Micromobility AKA eScooters and eBikes.

I would have thought Renault would have updated the Twizy by now, but seems to have lost interest.  If it upgraded the battery substantially as it did with the Zoe it would make the thing more useable, as would a softer ride and proper sealing doors to give some sensible weather protection.  None of this would be impossible or would spoil the fun of this machine.

What about rural customers?

What is this obsession with cities? Those of us who live in more rural locations find small cars make sense partly because the roads are too narrow to support larger vehicles adequately and safely. Similarly why are SUV ads often set in city scenes at night - are advertising agencies too urban focused?

Small cars - don't forget the MG3, Smart and Dacias. Even so it's disappointing that we don't get to see Honda Brios, etc, in the UK.

Why would anyone buy an UP anyway?

Perhaps car makers need to drum up more innovative, interesting and quirky designs for city cars and dare to think outside the box.

And you have car clubs for both classic and modern Minis and 500s and all sorts of enthusiasm and meet ups etc (perhaps less due to COVID).

I’d imagine you probably have something similar for the Smart Car.

I highly doubt there’s going to be quite as much enthusiasm or a fan club dedicated to the VW Up, and why would there be?

Lets be honest, the Up might be an ok little run around but it’s a pretty drab forgettable car when all is said and done and not many people will lovingly restore a VW UP in years to come.