BACK TO ALL NEWS
Currently reading: New Bentley Continental GT V8 is most agile yet
UP NEXT
New Lamborghini Countach: epic UK road trip in reborn icon

New Bentley Continental GT V8 is most agile yet

The new Bentley Continental GT V8 has been revealed in both its coupé and convertible forms, with the firm claiming it will be the “most agile” example of the grand tourer produced to date.

The powertrain makes 568lb ft of torque, giving the coupé a 0-62mph time of 4.0sec and a top speed of 198mph. The convertible has a 0-62mph time of 4.1sec and an identical top speed. Both versions feature an eight-speed automatic gearbox, with quad sports exhausts that Bentley says produce a “characterful V8 burble”.

Bentley claims the new model, which is lighter than the W12 version launched last year, will be “lively and engaging” to drive and have a touring range of more than 500 miles. The ride and handling has been tweaked for the V8, with lightweight anti-roll bars at the front and rear. Bentley’s Dynamic Ride System adaptive chassis control is available as an option. 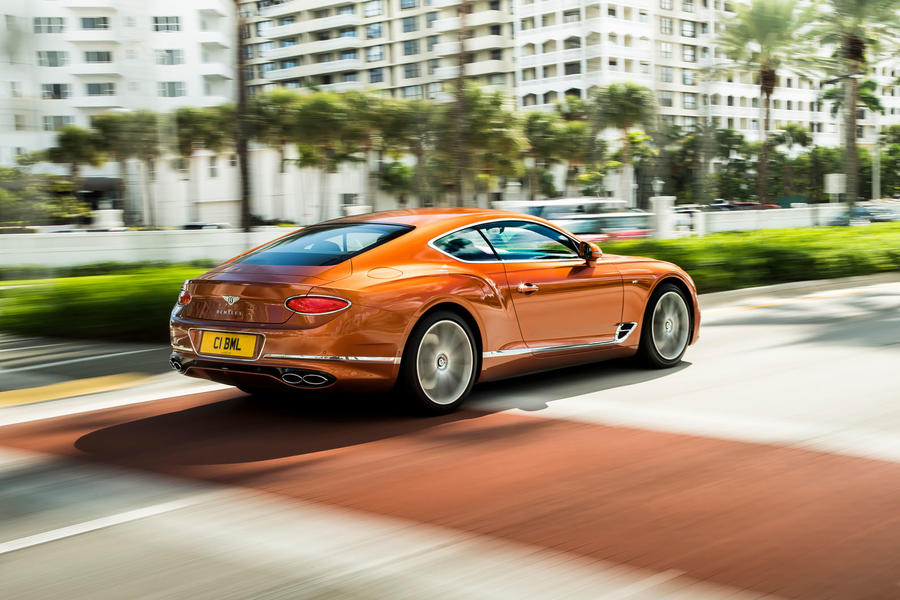 The model remains four-wheel-drive, with the system sending power to the rear wheels as standard for maximum efficiency.

The Continental GT V8 models are identifiable by quad exhausts and V8 badges on the front wings. The car sits on 20in wheels as standard, with optional items ranging up to 22in.

The interior features leather seats offered in a monotone colour split, a new walnut fascia – with other woods available as options – and a 10-speaker Bentley Audio system.

The Continental GT V8 will go on sale in the US later this year, with deliveries in the rest of the world, including the UK, starting in early 2020. Bentley has yet to confirm pricing for the new model, but it's likely to be cheaper than the £159,100 starting price of the W12 model.

15 countries in 24 hours with a Bentley Continental GT

The V8 here is new, appearing first in the current gen Panamera and primarily Porsche engineered. The W12 is all new as opposed to the previous unit and is unique to Bentley.

From what I've read, the W12 is not really "all-new," but it's a significant development of the previous VW W12. Regardless, the platform is the VAG-shared MSB -- same thing as under the skin of the Panamera. No doubt these are very good items but, to me, and at this price level, a Bentley shouldn't also be an Audi and shouldn't also be a Porsche. This new Conti is not nearly as compromised as the previous Phaeton-based version was, but it's still compromised, as is the Panamera. Bentley has emphasized how they "worked with" Porsche on the platform, and "insisted" on various things that Porsche didn't want, or wanted to do differently -- which means that neither the new Conti nor the new Panamera is quite what either manafacturer would've built if they didn't have to share the platform. Also, would Bentley have designed a W12 on its own, rather than a V12? Not a chance. Don't get me wrong, it's a beautiful car. But it's not what it really should be.

what I meant is with a more exclusive engine

Oh, you prefer the VW engined W12 then ?

The majority of testers  seem to prefer   the v8 and consider it is the better car.