Audi CEO Bram Schot has revealed that the company delivered 3.5% fewer vehicles to customers in 2018 than in 2017.

Speaking at the company’s annual press conference, Schot stated that the 1.812m Audi models sold in 2018 represented a drop of 65,000 compared with the previous 12 months.

In financial terms, this drop in sales translates to a €1.2 billion decrease in profit margins, down to €3.5 billion from €4.7 billion.

The reason for the shortfall, Schot claimed, is a lack of preparation for the implementation of WLTP European emissions regulation.

Audi was forced to create gaps in its product portfolio as certain powertrains fell foul of increasingly stringent pollution-targeting legislation, which in turn led to shift cancellations at the company’s Ingolstadt production facility.

Chief financial officer Alexander Seitz said the profits achieved are "a clear reflection of [Audi's] failure to prepare for WLTP", and "do not reflect Audi's expectations".

Schot said the company is better prepared for WLTP in 2019, having reduced its range of possible engine/transmission combinations by 30% and implementing a new “consistently Audi” operating ethos.

Working on the principles of transparency and integrity, Schot said, will help Audi to “find its way back” to the strength it enjoyed at the beginning of the millennium.

As part of the company’s ultimate aim to introduce 30 electrified models by the end of 2025, the brand’s stand at the Geneva motor show displayed only EVs, including the all-new Q4 E-tron.

Schot is confident that the growing electrified range will appeal to a wide audience, stating that “every customer will find the right ‘E’ model”.

Updated Audi TT RS could be the last of its breed 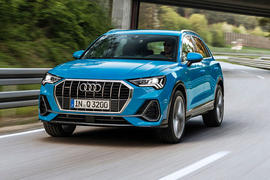 Hard to feel sorry for a company at the heart of emissions cheating that new rules 'caught them out' ...

I'd call that Karma, only I don't think VW group have suffered nearly enough for what they did.

15 March 2019
The thing VW should suffer most for is making the most boring cars in history, with black coalmine interiors, monotone grey outsides, the same brand of shitty tedious engines, and cynical badge engineering policies that differentiate a Skoda from a Bentley mainly via mouse clicks. Schadenfreude is a German word, and if anyone ever deserved karma for dieselgate it is this mob. But like I said, their biggest crime is their catatonically tedious and predictable cars.

Too busy with the interior lights options, making a big deal out of virtual cockpit, daytime running lights, close panel gaps fit and how many screws and fixings were deployed in the interior constuction...said that here from many years ago, and it seems I was right.

WLTP was not to blame

The car companies knew about WLTP emissions levels 2 years in advance they had plenty of time to ensure their products were compliant.

What caught them out was that, thanks to dieselgate, the new tests were much harder to fudge.

In the words of