BACK TO ALL NEWS
Currently reading: The new torque tech making Audi E-Trons EVs drift
UP NEXT
Exclusive: Bugatti to launch hybrid Chiron successor in 2027

Can new technology unlock the dynamic potential of electric cars? We take to the ice to find out
Open gallery
Close

It’s a simplistic notion, but when any manufacturer bringing a new EV to market in these past five or 10 years has mentioned fully asymmetrical torque vectoring, only one thought has entered this road tester’s mind: tank tracks.

Why shouldn’t a car with no joined driveshafts or differentials, which can drive opposing wheels in opposite directions, be able to spin 360deg on the spot? And why shouldn’t it handle in a totally transformative way? Surely a car that can deliver any torque load to any wheel in either direction ought to rip up the rule book on vehicle dynamics?

It turns out there are many reasons. Good, understandable reasons – some of which apply to the current generation of EVs but might not to the next one or the one after that. Reasons I wasn’t aware of when testing the likes of the Honda NSX, Polestar 1 and Ferrari SF90 Stradale, all of which feature electric motors that can supposedly vector torque fully asymmetrically across either the front or the rear axle, and none of which struck me as quite the dynamic landmark that my simplistic notions had led me to expect them to be. 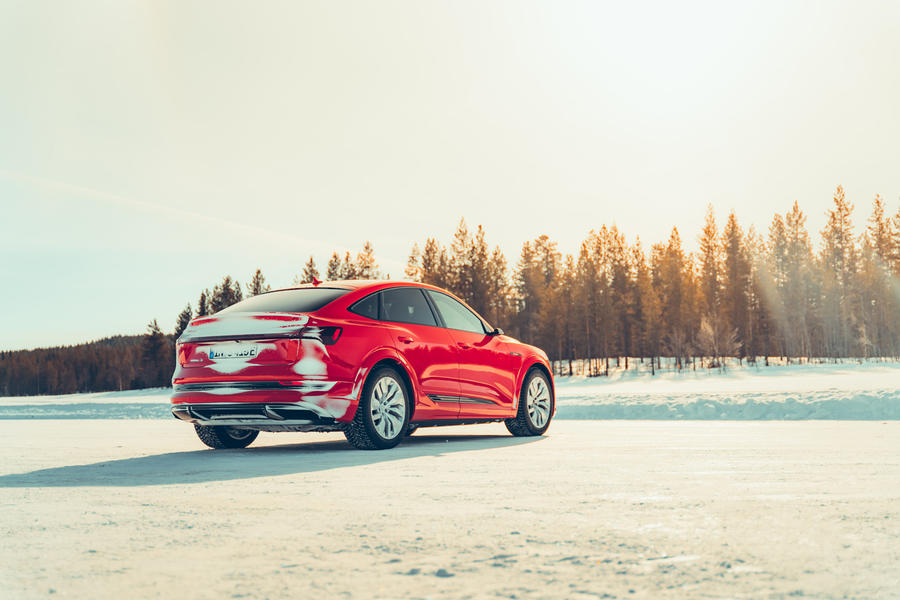 They’re reasons that I’m now having explained, slowly and clearly enough for my puny road tester’s brain to comprehend, by a very nice man in an Audi-branded padded jacket while standing on metre-thick ice in Arvidsjaur, northern Sweden.

This is Kilver lake, one of several that are turned into ice driving tracks and proving grounds in this area over the winter. And while it’s not the very one that Audi uses for vehicle development, it’s very like it (how different can one test track carved into a frozen lake be from another?).

The man is Niklas Finke, a vehicle dynamics engineer of some 11 years’ experience, taking a break from developing and tuning the next-model-year Audi E-tron S Sportback to answer some questions on the outright dynamic potential of the car for which he is partly responsible.

Audi’s electric crossover is out to make waves with asymmetrical, three-motor drive 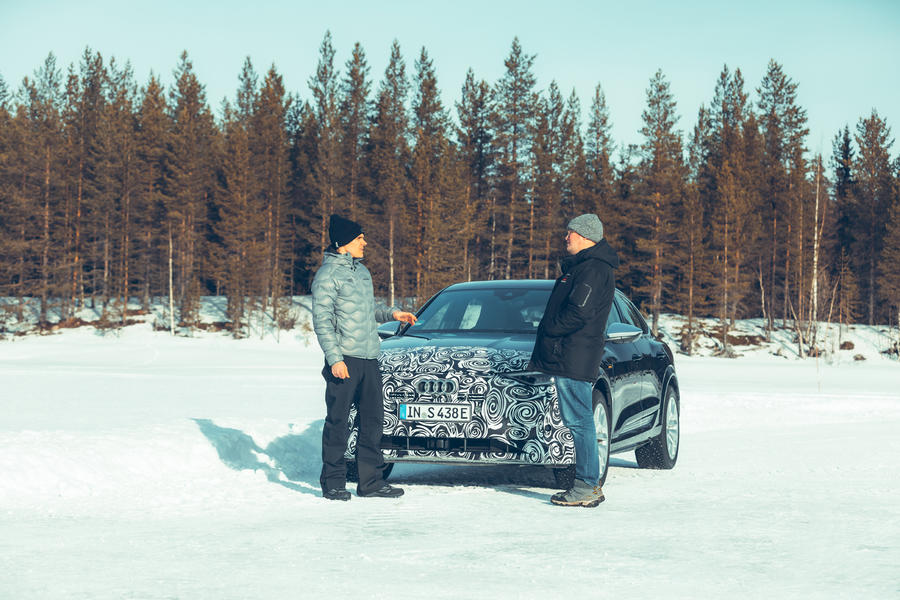 Does Finke understand, to begin with, why early efforts at asymmetrical EV drivelines have left some of us a little unexcited at the potential of the tech? “I think so,” he says with a wry smile. “With the technology as it is, you really need to test it in very low-grip conditions like we have here to fully appreciate what it can do. On dry asphalt, the gains are a little harder to perceive, especially in an SUV like the E-tron. But they are there.”

It’s time to press the reset button on my impressions, then. As a canvas on which to find out what the E-tron S Sportback’s tri-motor set-up can do on snow and ice, it’s a handling course carved out mostly in the image of the Nürburgring Grand Prix circuit that we have the run of. Other parts offer drift circles, slalom sections and longer, arcing, consistent-radius switchback bends that are ideal for testing lateral weight transfer. The track is wide enough to allow you to experiment with a smooth corner entry under a balanced throttle, or a trail-braked late one, or wilder cornering attitudes with lots of corrective lock. Reassuringly soft-looking snow banks seemingly made to be leant on guard the track limits.

The E-tron S Sportback’s handling does beat back my cynicism a little here. Early laps with the car set in its milder everyday driving modes and the electronic stability control (ESC) fully active prove how benign and easy to drive it can be, even in tough conditions. It’s running on winter tyres with spikes, but it doesn’t struggle to maintain fairly committed speeds or to follow almost any cornering line you adopt on a surface on which you struggle to even walk without slipping over. 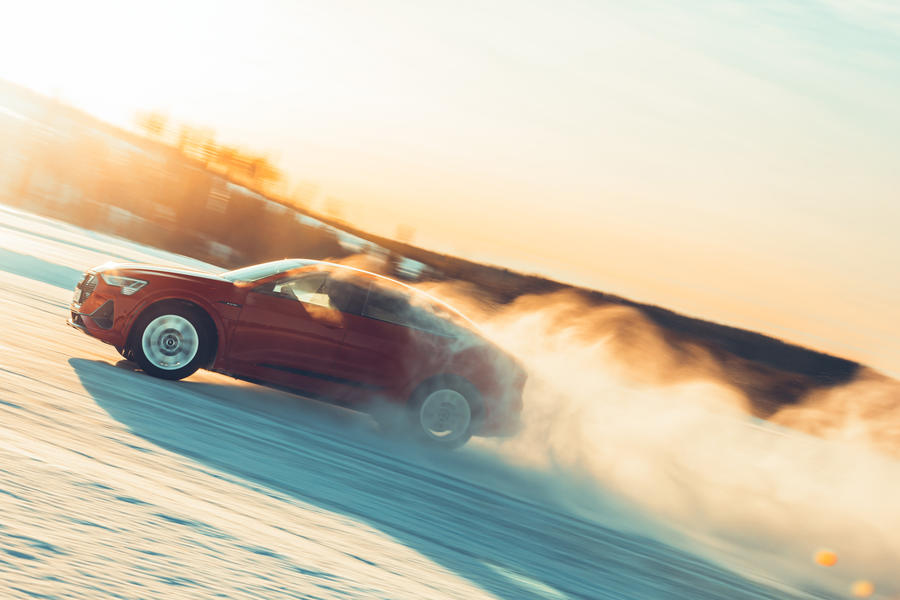 When the torque-vectoring tech is simply working to make the E-tron S Sportback as stable and obedient as you would want it to be in normal winter driving on the road, then, it works very well. And then, with the car set to Dynamic mode and its ESC dialled back into Sport, a more playful, adjustable handling character bubbles up.

Here, says Finke, the car is biasing much more torque to the rear axle by default – but it’s also reading steering angle, yaw rate and lateral load all the time and working the outside rear wheel much harder than the inside one when it thinks you want the chassis to rotate. And when it does that, it’s manipulating the cornering attitude of a big, tall and heavy car really smartly and effectively (although actually changing the path and line of the car on a slippery surface takes longer)

“If you turn in and accelerate at the same time, the software model sends all of the torque to the outside rear wheel, and it can do that instantly – much more quickly than any clever mechanical differential could,” says Finke. “Twin independent rear motors are a really elegant solution for this. We would have liked to use them in the E-tron GT [Audi’s electric sports saloon], but they couldn’t be packaged along with the four-wheel steering.” 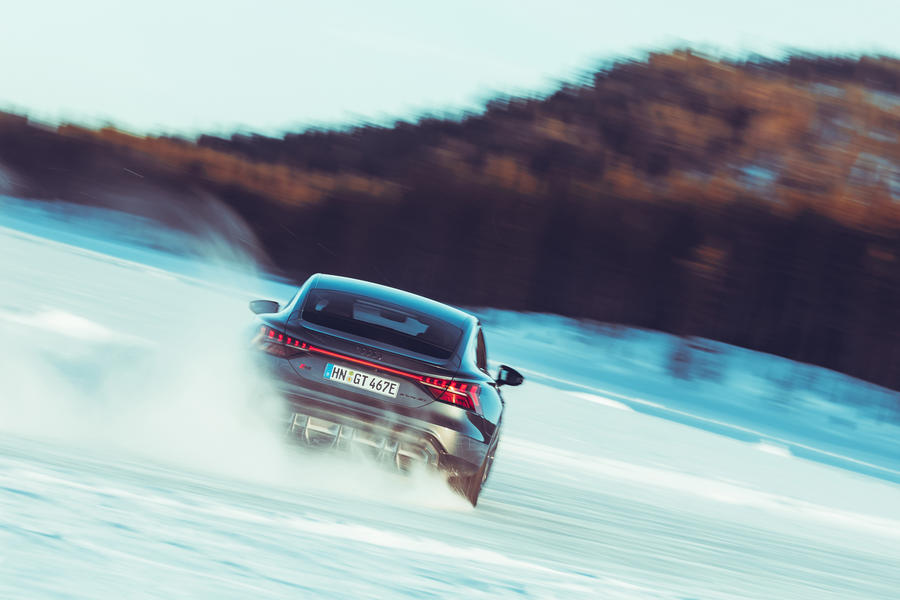 Handily, we’ve got an Audi RS E-tron GT on hand for some back-to-back comparisons of how a dual-motor EV handles on snow compared with a tri-motor EV. If anything, the RS E-tron GT feels like a more natural-handling car. It doesn’t seem to rely on driveline tricks to manage its mass and inertia and isn’t getting quite as wide in the corners when it does get sideways (and it will).

But with a mechanical torque-vectoring diff at the rear, rather than a pair of motors, somehow the RS E-tron GT isn’t turning in or changing its posture quite as keenly as the taller, heavier E-tron S Sportback, and its attitude isn’t as responsive to steering inputs or as adjustable mid-corner.

Neither car wants to do high-speed drifts with lots of corrective lock applied, like something rear driven and purer of dynamic focus might. Audi’s focus on go-where-you-point-it stability and Quattro traction sees to that. But physics is being defied here, at least a little bit. In a very particular set of circumstances, that asymmetrical driveline is proving its worth, making the taller, heavier car feel at times as if it were the smaller, lighter one. 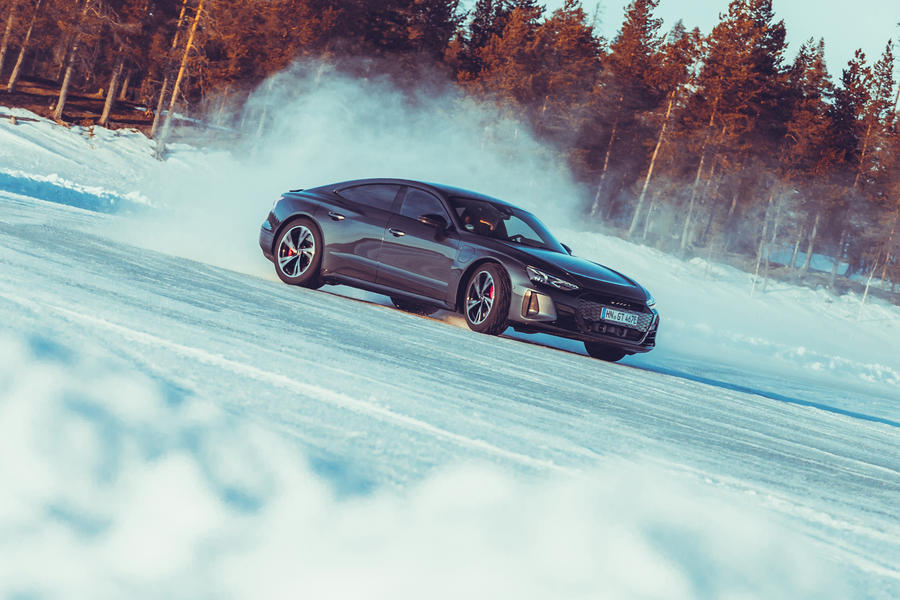 So what chance of an asymmetrical driveline that could feel like this in a car like the E-tron S Sportback on a dry UK track day, or one that could produce even more vivid dynamic gains?

“For now, we have to operate at the limit of what the car itself is capable of,” explains Finke. “The E-tron was built on our MLB Evo model architecture, the same one that the Audi Q7, Audi Q5 and Audi A6 all use, so the chassis and axles simply aren’t designed for greater cross-axle loadings than the ones that we’re already working with.”

As it is, says Finke, the E-tron S Sportback’s rear axle will never actually put negative torque into the inside rear wheel while driving the outside one: “We would have liked that capability, but since we can simply use the ESC to brake the inside wheel, we aren’t entirely without it. Yes, we could probably produce some handling gains if we had it. But to deliver really big gains, you would need a car with a purer sporting brief than an SUV – something lower, lighter and stronger-bodied, designed from first principles for dynamic handling.” 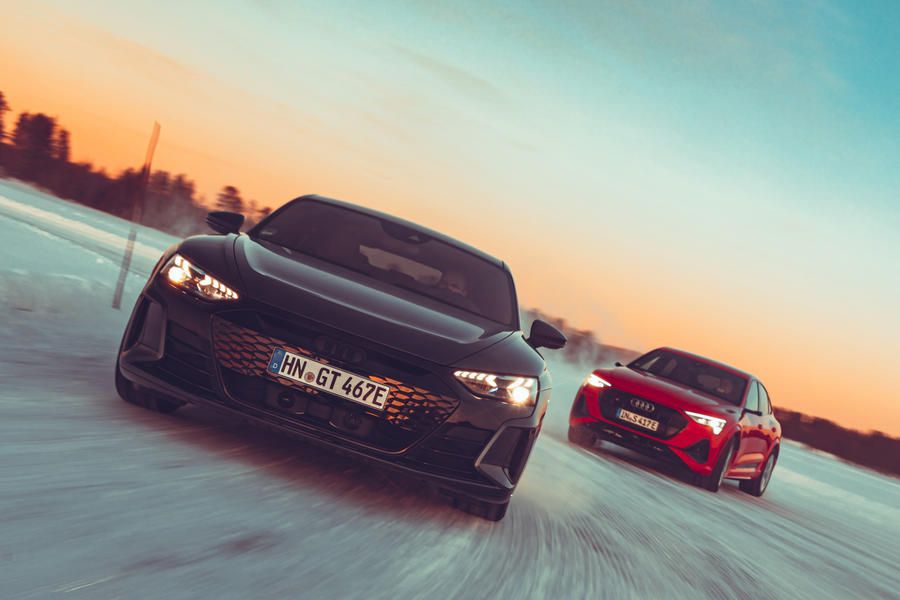 Inherited ICE car platforms are clearly one of the technical reasons why EVs aren’t yet showing the greatest torque-vectoring gains, then, and at least we know that won’t be a problem forever.

“You would also need a battery capable of really fast regen and much finer control of that regen if you wanted to do more with electric torque vectoring,” says Finke. “When you have that, maybe you won’t even need friction brakes any longer.”

“I would like to think that an electric R8 might be able to do these things if we developed a new one today, but first we need Lamborghini to decide that it wants an electric sports car too!” laughs Finke. 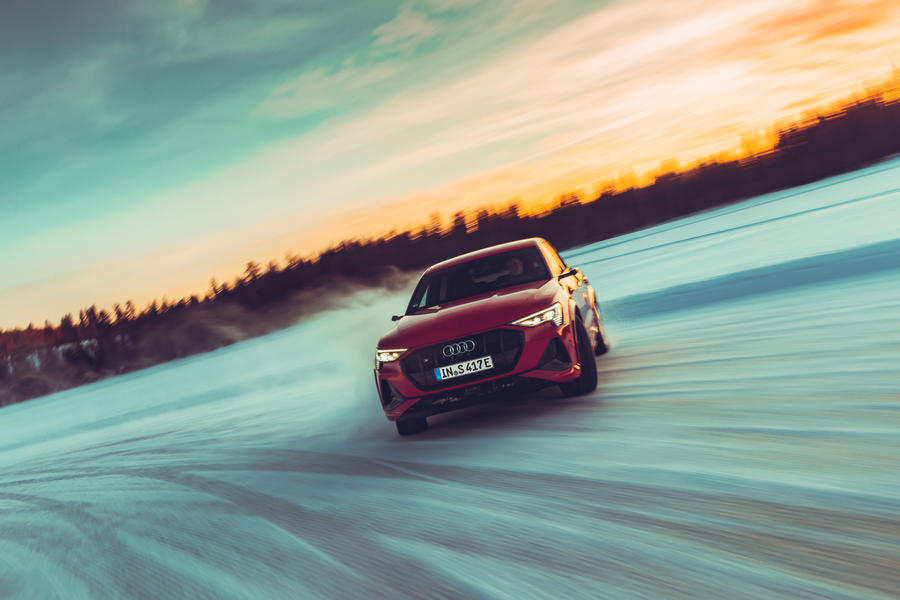 If it does, he reflects, it won’t be his job to develop it but one for his opposites at Audi Sport. Sounds to me like a good reason to put in for a secondment.

Either way, it’s clearly going to be a few years yet before the full potential of asymmetrical drivelines is tapped and longer still – unless Elon Musk is reading this while mulling over the novelty features of the new Tesla Roadster, perhaps – before we can buy one with a ‘tank track’ mode. 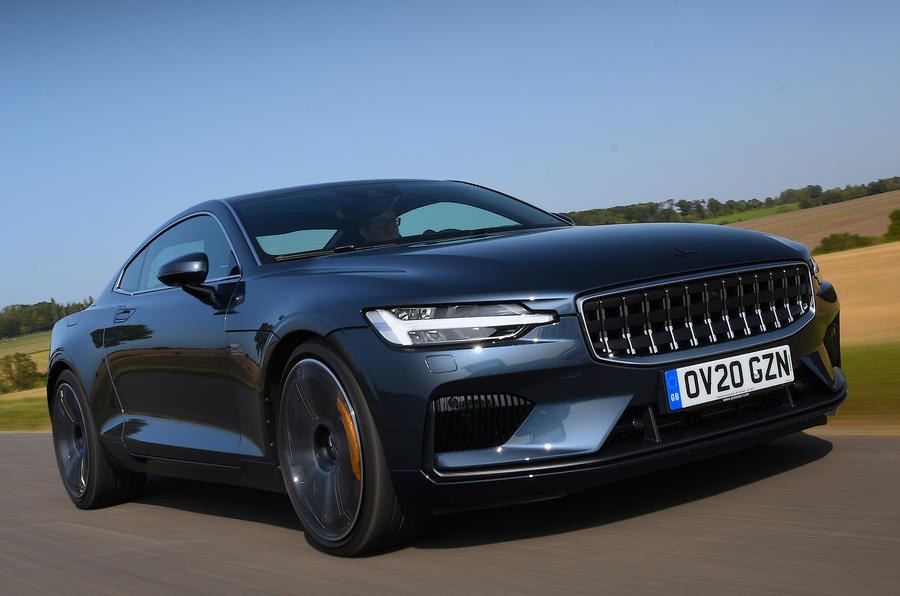 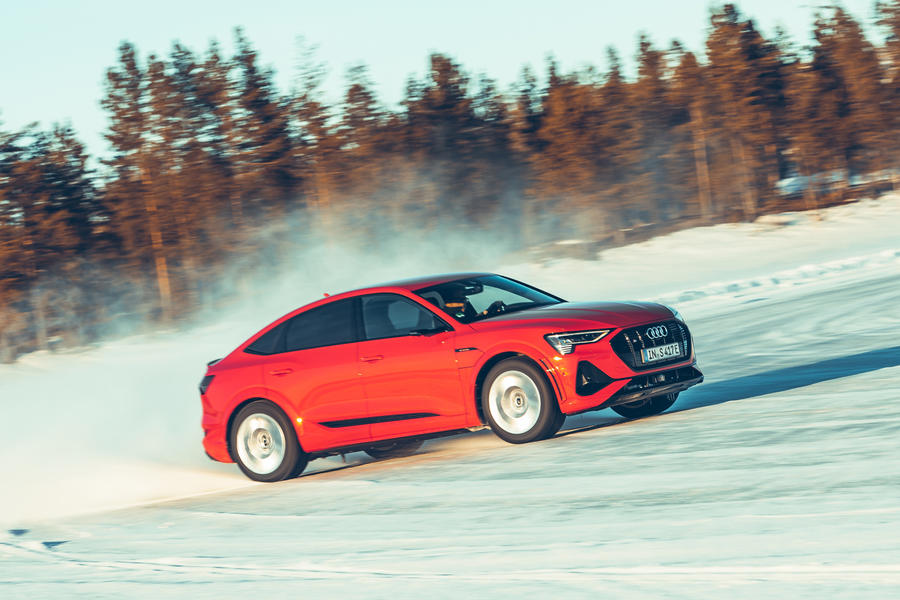 Audi’s tri-motor electric SUV is a real heavyweight, but it has rear motors potent enough to manipulate its mass keenly – on low-grip surfaces, at least. On dry asphalt, the effect is less pronounced. 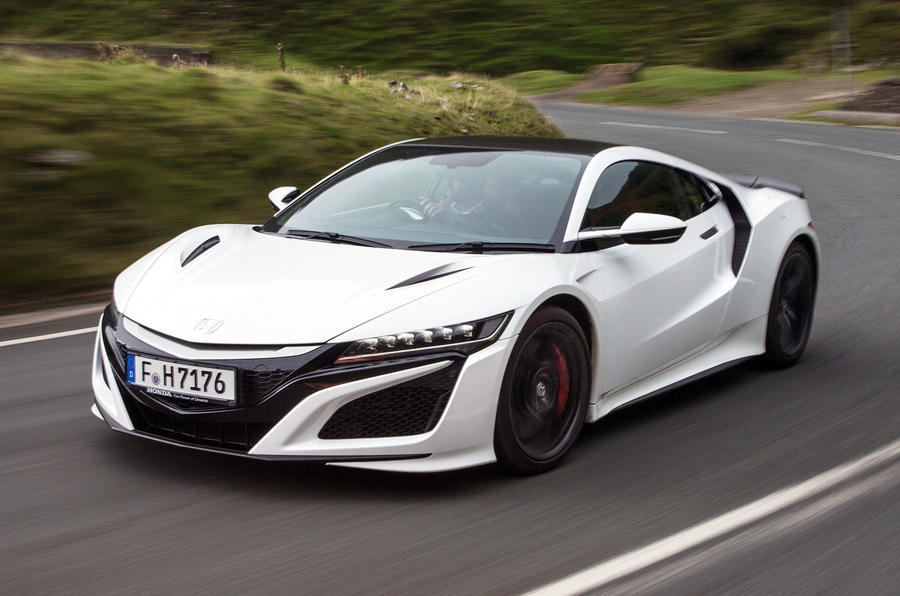 The second-generation NSX used its hybrid technology only lightly, with a small, light battery and no plug-in functionality. The vectoring effect across the front axle was understated. 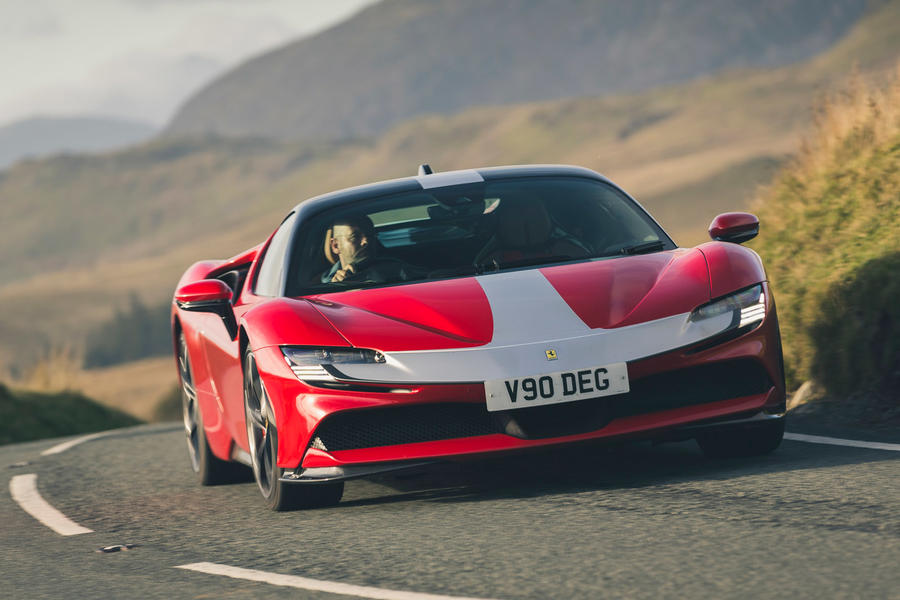 This torque-vectoring plug-in hybrid supercar has two motors for its front axle. Weight is kept creditably low here, but the front wheels mostly correct the car’s attitude when needed, with some steering corruption apparent. 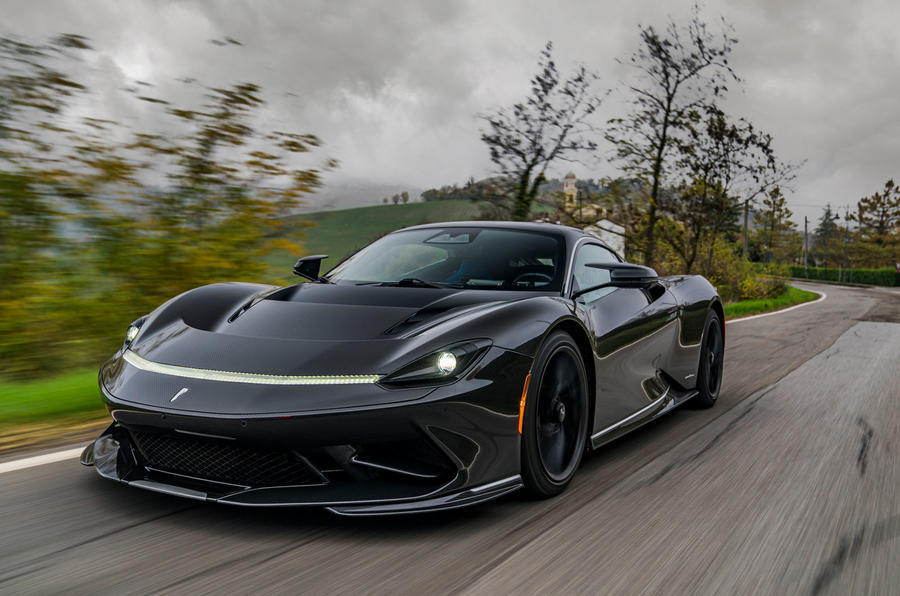 This car, alongside its Rimac Nevera relation, probably demonstrates the furthest anyone has pushed electric torque vectoring to date, with spectacular results. We’ve reported its handling feels at times “as if the car is on castor wheels”. 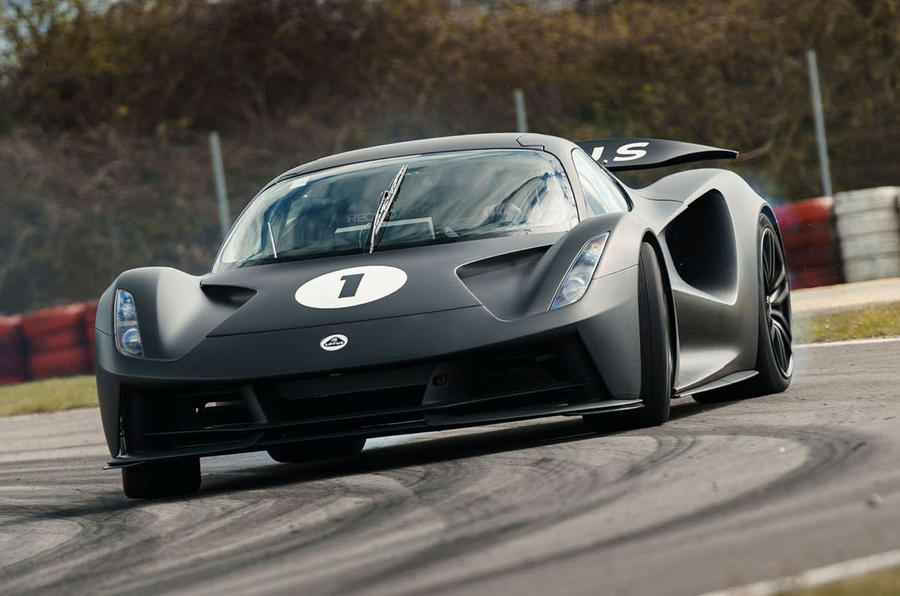 Lotus claims its electric supercar will have a rear-biased torque distribution, despite it using matching 503bhp electric motors at each corner. So far we have only driven a prototype whose vectoring software wasn’t finished.