BACK TO ALL NEWS
Currently reading: Giving the lion back its roar: Gilles Vidal on his time at Peugeot
UP NEXT
New 2023 Audi A4 Avant undergoes tests in the Alps

Giving the lion back its roar: Gilles Vidal on his time at Peugeot

As his successor is announced, the former design director tells us how he returned the French brand to aesthetic excellence
Open gallery
Close

Following a storied career at PSA, it was announced this week that Gilles Vidal would be stepping down as Peugeot's design director after 10 years.

Having helped transform the styling direction of the French brand, and overseeing some of its most eye-catching new models, including the 508 saloon and 208 hatchback, he now hands the reigns to successor Matthias Hossann and moves to Groupe Renault, where he will report to Laurens van den Acker. But what legacy does he leave for the new generation?

Autocar spoke to Vidal before his departure was announced, to find out what his thoughts were on future trends, the influence of autonomy on design, and what to expect from Peugeot next.

On the very day we spoke to Gilles Vidal, it became clear that the Geneva motor show, the best-loved and most open-minded of the European salons, wouldn’t be able to recover in 2021 from its shock cancellation in March, as many had hoped.

Manufacturers, shaken by the pandemic upheaval and scared by the impending cost of another Geneva, had just told the organisers they would be unlikely to support next year’s event, which came as quite a shock. Wouldn’t the lack of Europe’s most-loved motor show, we media types wondered, curb the very design progress that people like Vidal have always championed? Surely car creators need motor shows to display their wares and justify their existence? The Frenchman’s reply came as another surprise…

“Missing out on an event like Geneva – or Paris, with its one million visitors – is definitely a shame,” he says, “but I have to say it doesn’t matter all that much. Even if we never showed our concepts to anyone, they would still be amazing tools for investigating materials, colours and the sheer freedom of design.

“In any case, we now have digital communication working at a far higher level than ever before. And we can always hold Peugeot-specific events. So even without motor shows, we still have ways of showing our work to the public. Perhaps some of us will miss the physical encounter with outside people, but it’s far from being a disaster.”

Vidal should know. His impressive reputation at Peugeot is founded on a bold new design philosophy he brought to the marque soon after taking on its top design job in 2010 at the comparatively young age of 38, having worked for the 12 previous years on Citroëns. His first big design statement was a seminal Peugeot concept, a never-to-be-built roadster called the SR1, which ditched the previous ‘wide-mouthed frog’ look and gave perfect visibility to an under-the-skin move by Peugeot’s engineers towards high technology and lighter weight. But in our discussion, he surprised us again by firmly consigning the SR1 to history.

“Concepts grow old very quickly,” he asserts. “A proposition like that feeds the next few years’ designs, but consumers don’t want clones that last a full design generation. Not from Peugeot, anyway. They enjoy progress. It’s true that some concepts, perhaps like the SR1, start something new. But you have to move on, and we have.” 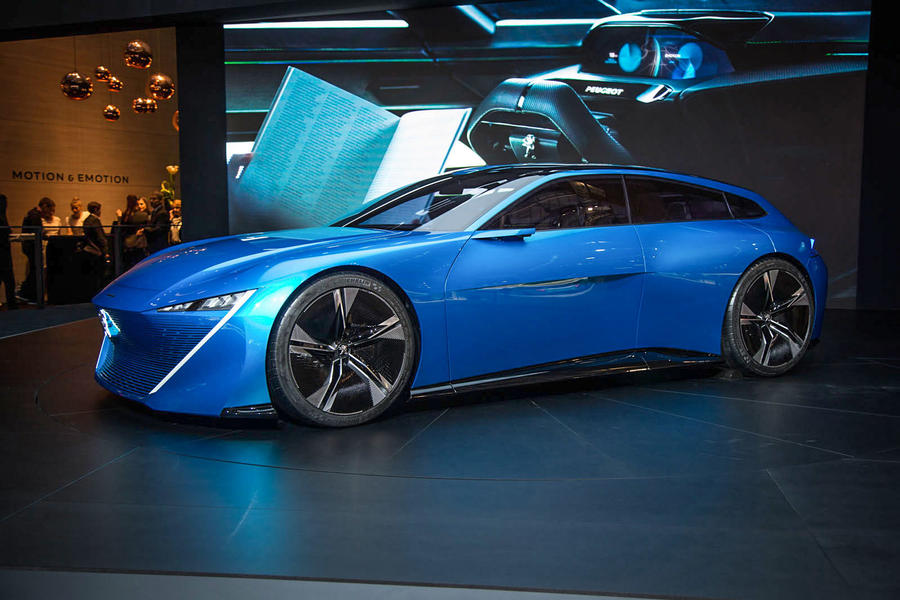 It’s clear from our first few minutes of talking that Vidal has well and truly grown into the role of a trendsetter. His first important concept may have been good, but there’s a confidence in his manner that says what comes next will be better.

The past dozen or so production cars designed and released since Vidal was appointed have dealt easily with issues previously seen as tough hurdles for Peugeot – finding a beautiful new ‘selling’ shape for the problematic Peugeot 508 saloon, making his unique i-Cockpit design work (six million built and counting) and turning the Peugeot 3008 and Peugeot 5008 SUVs into products that rival even Audi for desirability. His confidence in the role is especially evident as he briskly bats away my next fuzzy question about identifying the latest trends in car design.

“There are as many trends as there are car brands,” he says shortly. “Our job is to embody the technology and efficiency of our particular cars and to fit them to the moral values of modern society. You’ve got to be clever at this to succeed. Design isn’t just a shallow form of communication; it has to have substance. We’re working to make Peugeot design reach into our factories, even to affect the way we build our cars.”

How does this thirst for modernity square with the e-Legend, I ask, the tech-packed, “100% autonomous” concept that speaks 17 languages but recalls the lovely lines of the 504 Coupé, whose heyday was 50 years ago? Vidal and his team called it “retro-futuristic” when they launched it at the 2018 Paris motor show. “People want enjoyment from their cars,” he explains, “and as long as we respect that, we can take our design in any direction we want. Not every car has to be a whiteboard, driving about…” 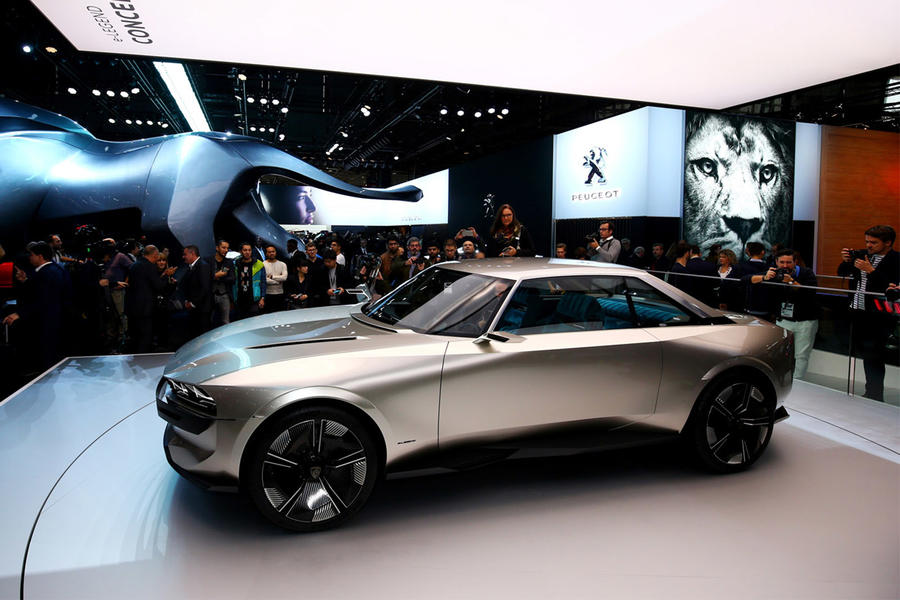 Does that mean Peugeot might contemplate a heritage model for serious production? Something along the lines of the latest Mini hatchback or Fiat 500? “It’s feasible,” Vidal allows. “The idea appeals to many customers who like old British values or dream of la dolce vita in Italy. Ideas that recognise this are clever and valid, but we’re not going to produce something like the e-Legend as you saw it. I’m not sure we would do something like the Mini or the 500, either, although we’re certainly thinking about what we could do.”

Vidal approves of the retro cast to designs like the Mini and 500 for the way it reassures car buyers to take the step of moving into a new era, such as the electrification age. “We must find ways to associate positivity with the future,” he says. “Look at science-fiction movies today: they tend to be dark and threatening, entertaining but terrible. Never warm and human and positive. We need to find clever ways to make positive associations with new cars, but we’re still working.”

Following Peugeot’s success with the i-Cockpit (it gets half the negative feedback of other aspects of modern cars, according to Vidal), he says he’s actively looking at getting rid of dashboards altogether – an idea made possible by the changes electrification will bring. “We can put airbags in the roof,” says Vidal, “and can make the structural changes in our new electrified platforms, so it’s feasible. We have all the bits and pieces, the components. Making the change in our factories is where the challenge really lies.” 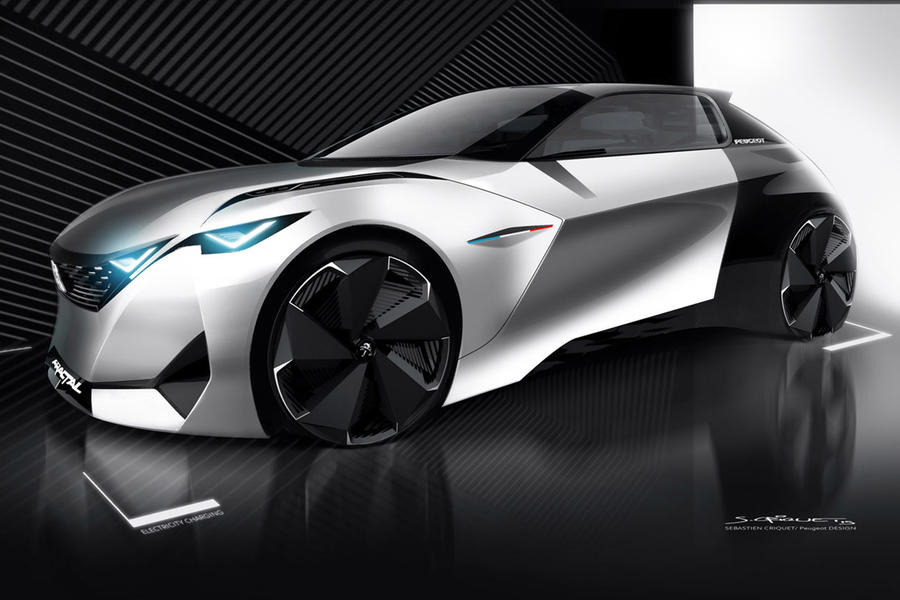 But what about daring designs, I ask? Haven’t we learned from some recent products that differentness sells? Vidal agrees, but he’s keen to make clear that it isn’t so easy to make a Nissan Juke, say, that looks different but also appeals to a wide market, including the all-important older customers who can actually afford to buy the cars.

“You can’t just do crazy cars,” he explains. “You have to be aware of the risks. People see their car as a reflection of their personality and don’t want to look foolish. And they worry about being able to resell what they buy.

“Still, cars like the Juke clearly show there’s more than just an appetite for special cars: people are demanding them. We must make cars that are a lot more expressive. But we must be right. We must feel where the limit is and be consistent with our brand values. It’s not a simple task.”

Will the e-Legend make production?

Peugeot must be getting very close to deciding whether to build a production version of its e-Legend concept, which was very much admired when it was unveiled at the Paris motor show two years ago. 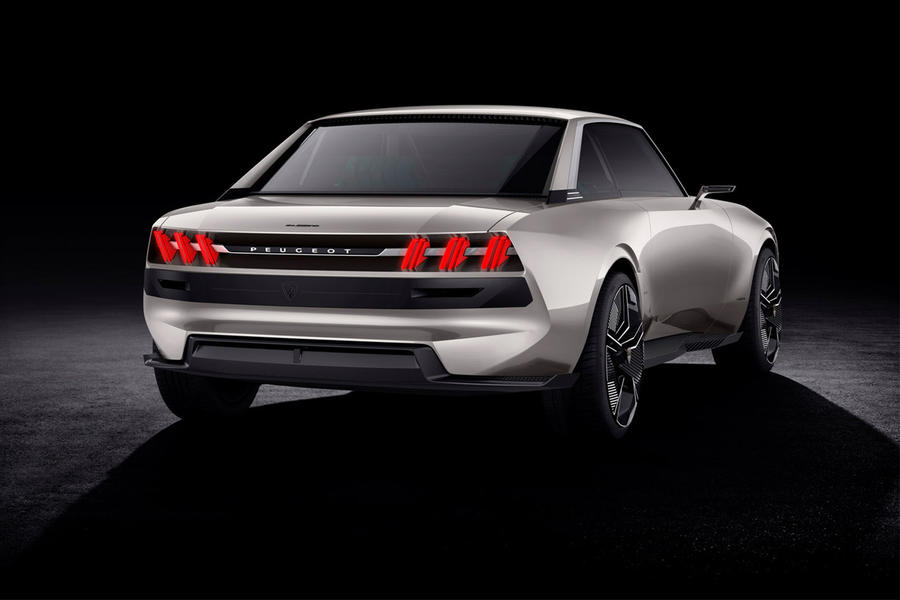 At the time, Peugeot’s big boss, Jean-Philippe Imparato, told Autocar that a decision wouldn’t be made about the electric “retro-futuristic” sports coupé (which recalls the company’s revered 504 Coupé, launched in 1969) until the PSA Group’s current electrification phase concluded in 2020. This must surely mean the car’s future has risen to the top of the agenda of either Imparato or someone else very important.

For this story, Gilles Vidal spoke warmly about the idea of producing heritage-inspired models and told Autocar – rather carefully, we thought – that “we’re not going to build the e-Legend as you saw it”. To us, that meant we definitely won’t see the car as an autonomous vehicle that doesn’t even need to steer and speaks 17 languages.

But it might leave room for the car, or something very like it, with an advanced hybrid powertrain or even all-electric power. After all, Vidal does think that such cars create a positive view of the future. And with Covid-19, perhaps that’s more necessary now than ever before.

Peugeot e-Legend: how the popular concept will influence the maker's future

It will be interesting to see

It will be interesting to see what he brings to Renault. The transformation of Peugeot (not simply a matter of design) makes we wonder what proper management could have done with Rover or Saab. Both Peugeot and Toyota are examples of what can be achieved when someone says 'enough, start doing this properly'. Although I can't live with the icockpit design so that puts them out of my shopping list.

Although I can't live with the icockpit design so that puts them out of my shopping list.

I've never sat in or driven a current Peugeot but when driving any car, I've always tended to adjust the steering wheel to its lowest position so it sits in my lap.  Perhaps the icockpit would suit me - I certainly like the look of it as I do the exteriors of all current Peugeots.