BACK TO ALL NEWS
Currently reading: Bigger cars, bigger factory: How Lamborghini is changing
UP NEXT
Mourning the car bodystyles that have died out

As the Urus begins to reshape the way Lamborghini builds cars, we head behind the scenes at its vibrant Sant'Agata HQ
Share
Open gallery
Close
Share story

The factory in Sant’Agata resembles the inside of Andy Warhol’s head. On the major production lines, of which there are now three since the arrival of the Urus SUV, and in the trim departments and in the solar-panel-shaded bays where completed Lamborghinis await a 30-mile shakedown, colour is everywhere.

Rose, lime, fuchsia, turquoise, blazing orange, bronze, all in matt and gloss finishes: the place has never been so riotously, wondrously vivid. Turns out Lamborghini’s numerous new customers in China and Japan don’t really do subtlety, and why should they?

Neither has the place ever been so busy. Lamborghini will build 8000 cars this year, of which the Urus should account for more than half. It gets its own paint shop on-site and a new contemporary-feeling assembly hall the far side of the hot and oily Squadra Corse motorsport workshops. In here, the process is more robotised than it is for the hand-assembled supercars. The SUV’s Porsche-sourced, visually monstrous twin-turbo V8 powertrain glides from station to station (takt time 35 minutes, compared with 75 minutes for the Aventador) on autonomous rigs that rise up hydraulically when the moment comes to unite body and chassis. 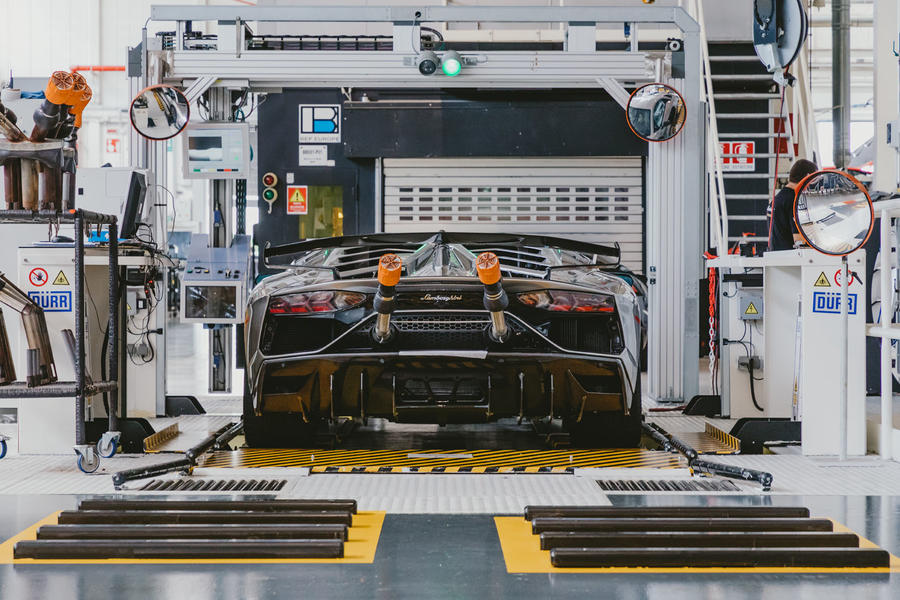 To meet demand, production is running 12 unbroken hours each day, though the quiet, focused ambience in the building tells you more than the numbers: they’re still a little bit up against it in here. Another detail that stands out is the workforce demographic, which in the case of the Urus is youthful. I’m told Lamborghini recruits interns from colleges in the region, with almost all going on to earn a full-time job that presumably commands considerable kudos down the trattoria.

Of course, it’s not hard to imagine these young people might want to one day work on the historic lines that gave us the Miura. These fascinating, 200-metre catwalks are annexed to the main building. Here they slow-cook around 13 Huracáns and only four or five Aventadors daily, along with the occasional Huracán GT3 and Super Trofeo racer. Like the Urus hall, there’s plenty of natural light in here, but the ceilings are lower, the pace slower and the atmosphere quite a bit more intimate. After all, they’re creating among the most flamboyant toys imaginable, for some of the most demanding people imaginable.

Co-developed with Audi, the Huracán’s V10 arrives in Italy having been born in Györ, Hungary, but the Aventador’s 430kg 6.5-litre V12 comes from Sant’Agata. Huge blocks sit on stands and polished, club-like pistons glisten in the gloved hands of tattooed employees. Now imagine being the person who gets to drop 659bhp into the sternum of an Aventador SVJ, whose carbonfibre shell has previously been sent 20 minutes down the road to be painted by a company called Imperiale. 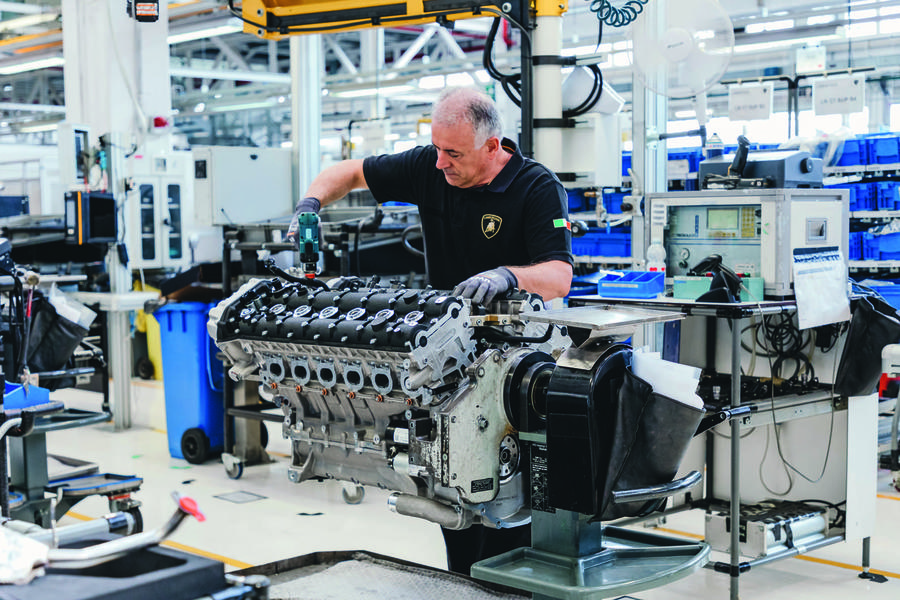 Almost all the cars currently on the Aventador line are SVJ-flavoured, though the next flagship Lamborghini will use a V12 hybrid, as demonstrated by the recent 808bhp Sián FKP 37, whose low-voltage electric motor sits inside the transmission. How much will these lines need to adapt to give us electrified supercars? It’s a pertinent question, as every Lamborghini will have some form of hybridisation by 2025. One hopes not too much. It still feels very special here; the whole operation borderline illicit.

Which brings us to Mario Fasanetto. We bump into Lamborghini’s chief test driver, successor to one Valentino Balboni, on the way out of the canteen after lunch. Pure happenstance, but revealing. Not only because having a man like Fasanetto milling around in the canteen is evidence of a company culture keeping it real, but because of what he represents, which is continuity, and like CEO and ex-Ferrari man Stefano Domenicali, also a deep understanding of what sort of company Lamborghini needs to be. 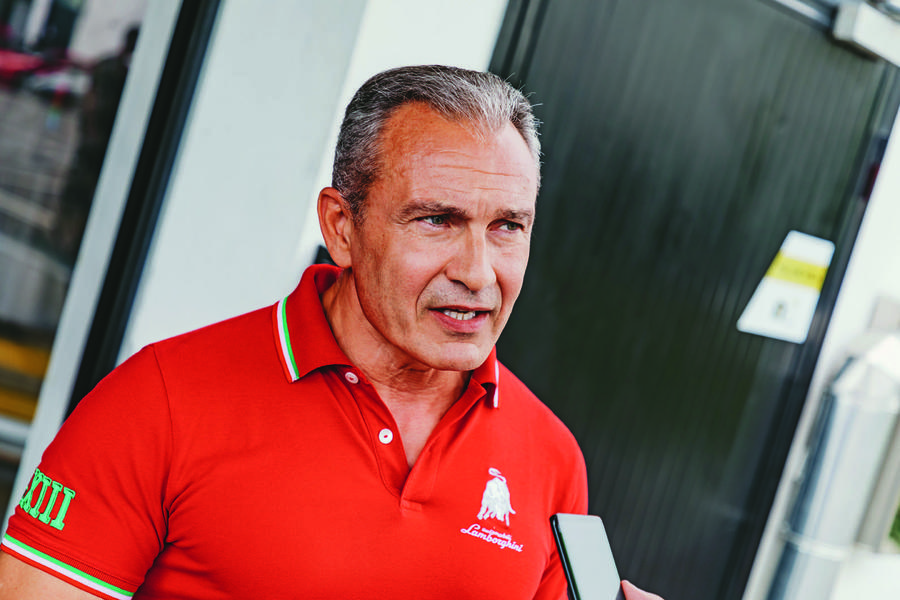 Fasanetto joined Lamborghini in 1985, during the time of the Countach Quattrovalvole and 3.5-litre Jalpa. He says the company had just 250 people on the payroll when he started in engine production. That was before moving to test-bench and then to aftersales – all stepping stones towards the dream job. He recalls the “properly crazy” testing of new models on public roads with Balboni, before circuits were the norm, and of the emotional experience of learning the Nürburgring for the first time. He adored the Diablo GT – “Our first big step, and something that was really different compared to everything so far” – and admits, with a smirk, that the Murciélago SV was maybe too much of an animal because the central viscous coupling couldn’t keep up when the rear axle took off. He asks how fast our Performante went, then staggers back theatrically, pretending to grasp for a door frame. Which is just fine by me.

He’s a man who really gets it, and that’s more important now than ever. The Urus has ballooned profitability and taken the company’s valuation to $11 billion, but the glorious naturally aspirated engines are fighting for their legislative lives. And while the Performante demonstrates the gifts the company can give to those who really care about driving, the refreshed Huracán Evo gorges, somewhat experimentally, on complex chassis electronics to the detriment of dynamic transparency. Building fast, emotional and truly engaging cars is going to get much harder, because choosing to leave on the shelf technologies that can make your product even quicker and more marketable but ultimately less involving at the wheel takes courage. Lamborghini is in rude health, and on the ground in Sant’Agata its loveable soul seems very much in tact. I only hope the core products – for the avoidance of doubt, the supercars – can maintain enough grit to match the glamour.

Lamborghini first took to the Nürburgring during the development of the 1999 Diablo GT, but has recently stepped up its presence, ambushing Porsche with record-breaking sub-seven-minute laps first for the Huracán Performante and subsequently the Aventador SVJ. One aim is to convince sceptical 911 GT3 owners that cars like the new Huracán Evo can exhibit the same dynamic finesse Porsche trades on. 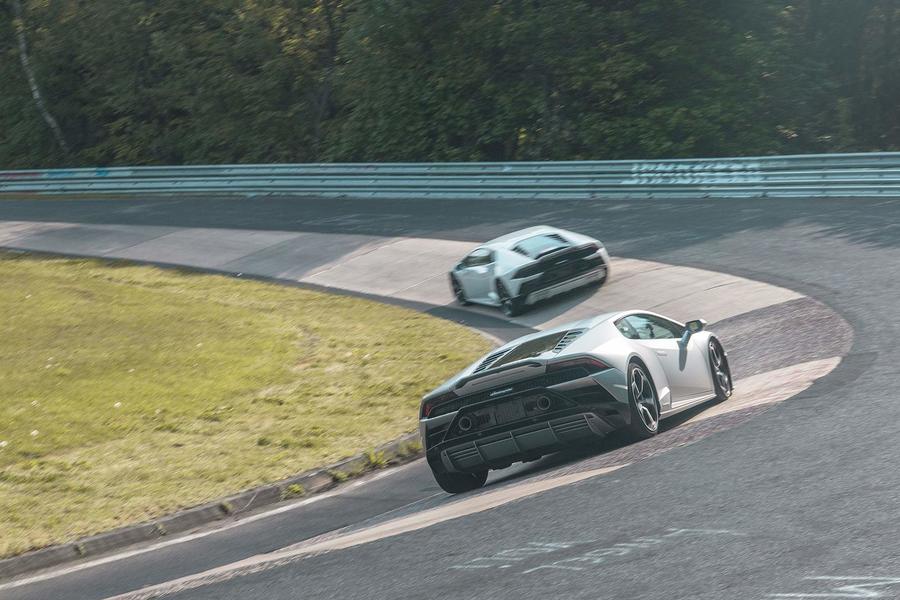 To make the point, Autocar was given the keys to an Evo in which to chase senior development driver Nicolò Piancastelli (in another Evo) around the ’Ring. First thing to note is the facelifted car is still a phenomenally trustworthy device, and to the extent that even our initial lap dips below eight minutes. But there’s now also four-wheel steering that is integrated with the ESC, torque-vectoring and damper characteristics. The result is greater agility than even the Performante, and turn-in so sharp it’s freakish. For accessible thrills, there’s little else like it, but still this has been achieved largely by electronics: the suspension geo is from the old Huracán, and GT3 owners will feel that.

The Urus seems to have given Lamborghini the sales that it always looked for, but could rarely achieve. What will be interesting to see, will be whether Lamborghini wants to, or VAG will allow it to, increase sales further by expanding its SUV range. The question of course is, how big will be too big for Lamborghini?