Lamborghini needed a 631bhp Huracán Performante to be returned home from Goodwood. We handled with care...
Open gallery
Close

We’ve all read about downforce, but photographer Max Edleston and I are now experiencing the phenomenon.

It becomes noticeable at 180mph, when our Lamborghini’s gobsmacking Rosso Bia body begins to squeeze high-frequency suspension vibrations into submission, smoothing the flow. At 195mph, the force exerted on the front apron means effort is required to make tentative steering corrections. At 210mph, 10 screeching cylinders are all but drowned out by torrential oncoming air, which isn’t surprising because the Huracán Performante is now making almost eight times the downforce of a basic Huracán.

Less than 1400kg of aluminium, plastic, ‘forged’ carbon-composite, Alcantara and ego has bolted itself to the road with a resolve that messes with your head. Only a moment ago, this thing seemed one of the most agile, flickable supercars out there. Now it’s an anvil on wheels. Far from feeling loose or frightening, by the time we nudge the wall (not for want of power but of a taller seventh gear), our Performante is travelling with trance-like calm amid a maelstrom of physics. According to the dials, the wall sits at a faintly absurd and totally exhilarating 216mph. 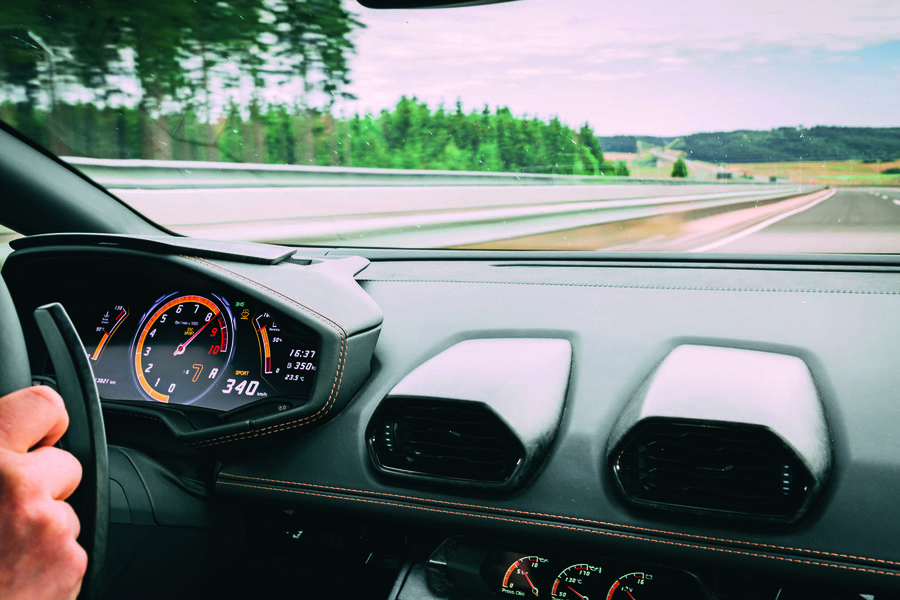 Lift off, coast for a moment, tickle the other pedal… and breathe. Much as the sustained discharge of 631bhp leaves you speechless, it’s not the only reason we’re on an autobahn. Lamborghini needed this car chaperoned back home to Sant’Agata Bolognese from the Goodwood Festival of Speed and, when asked to go long and hard in arguably the greatest driver’s Lambo to date, the only answer is ‘sì’. On arrival, we’ll visit the factory to assess how much of an upheaval the company’s entry into the world of SUVs has created, but for now it’s all about having one last blast with what, in the future, we’ll undoubtedly refer to as a proper Lamborghini.

It’s an enviable trip, but also one that raises some interesting questions. For one, how polished is too polished? Modern engineering means even trackday specials like the £215,000 Performante could, by the coating of their titanium con-rods, now have the breadth for grand touring. The ridiculous (deliberate?) absence of a solitary cupholder, doorbin or even a glovebox suggests otherwise, but so far the car’s ride quality has been exemplary given its role as a Nürburgring blade. To our surprise, the leather buckets – stitched with proud, vivid tricolore stripes to match the ones exploding along the outer sills – are also decently comfy. Close the exhaust valves that transformed our Eurotunnel carriage into the longest, wildest didgeridoo in existence and the car has manners, too. 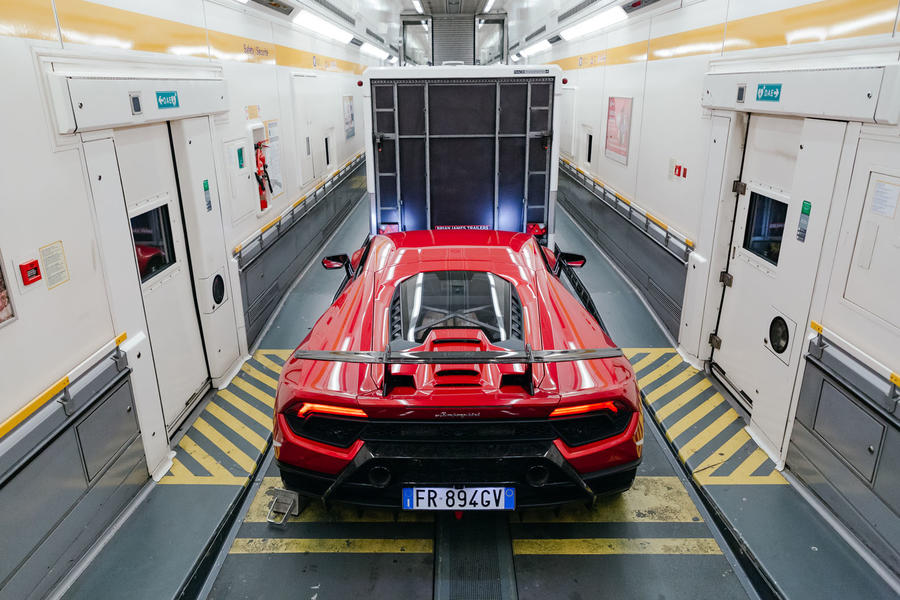 The violence can be suppressed and then electronically drip-fed in via three driving modes – Strada, Sport and histrionic Corsa – along with your right ankle’s angle of attack, but you do have a choice. Question is, should there ever be a choice with cars as beautifully unhinged as the Huracán Performante? Everywhere we go, the reaction to its sinful LED headlights, prehistoric silhouette and rear plumage is the same. People turn, their mouths fall open and the hand then points. In Italy, that’s your cue to pull both paddles, dropping the transmission in neutral, and depress the accelerator. The visible enjoyment of everyone else tells you two things. First, unlike aristocratic Ferrari and po-faced Porsche, the cars that mad Lamborghini builds are strangely classless, like Hawaiian shirts. They’re the good guys: everybody loves them. Second, supercars will always capture the imagination and reveal something about the person who sees one go by.

Returning to the question, I think most people would rather cars like this left us tired and aching but wired and desperate for another hit, rather than frustrated by a perceived lack of grit. But if a sweet spot between does exist, our route to Italy gives ample opportunity to see whether the Performante nails it.

There is the autobahn, which we pick up at Kradenbach in the Rhineland. It’s a theatre in which the Performante actually does pretty well, with its speed, soft mid-engined-style spring rates and reasonable 25mpg cruising economy; this from a 5.2-litre naturally aspirated V10 that will go down as one of the greatest-ever road-car engines. Later on we’ll reach Baden-Baden, from where the evocatively named Black Forest High Road flows southeast, wide and smooth over low, densely wooded mountains. Day two sees us over the much more technical Silvretta Pass in Austria before heading to Innsbruck, then down into the wealthy, industrialist plains of northern Italy and Lamborghini’s hometown. It’s about 1200 miles all-in, further than many owners will drive these cars annually. More fool them. 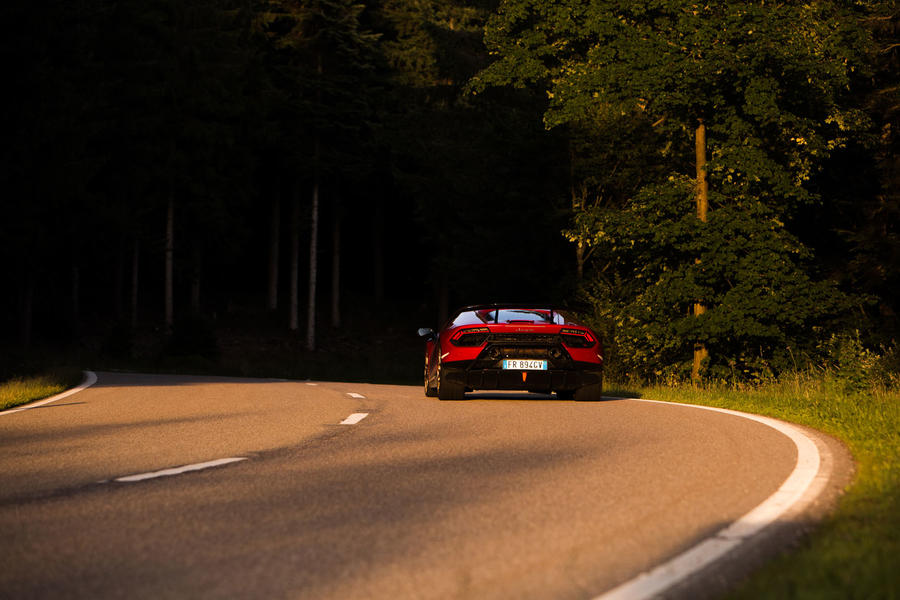 Two-hundred miles evaporate and we reach the Black Forest at sunset, where the Performante performs its party piece, which is to rip into the road surface with Pirelli tyres that feel more like crampons and allow you to get the digital tacho whirring like a Catherine wheel. The chassis won’t freely adopt little slip angles like a Ferrari 488 Pista and doesn’t do the same gratifying rear-flavoured poise as a Porsche GT2 RS, but the grip and millimetric accuracy with which you can aim the cartoonishly fanged nose is astounding.

It feels intuitive, too; not like an Aventador, which adds to the general air of excitement by making you guess just how much grip is left. The younger brother is a more condensed machine that will let you coax it close to the white lines – closer than perhaps any other supercar. And when you also have an 8750rpm engine of this calibre at your disposal, having confidence in your ability to place the car so precisely makes it easy not only to like, but to love, almost unconditionally. These are the first genuinely good roads on this trip and it takes the Lamborghini all of three third-gear corners to remind us that it is the definitive get-in-and-go-wild supercar. 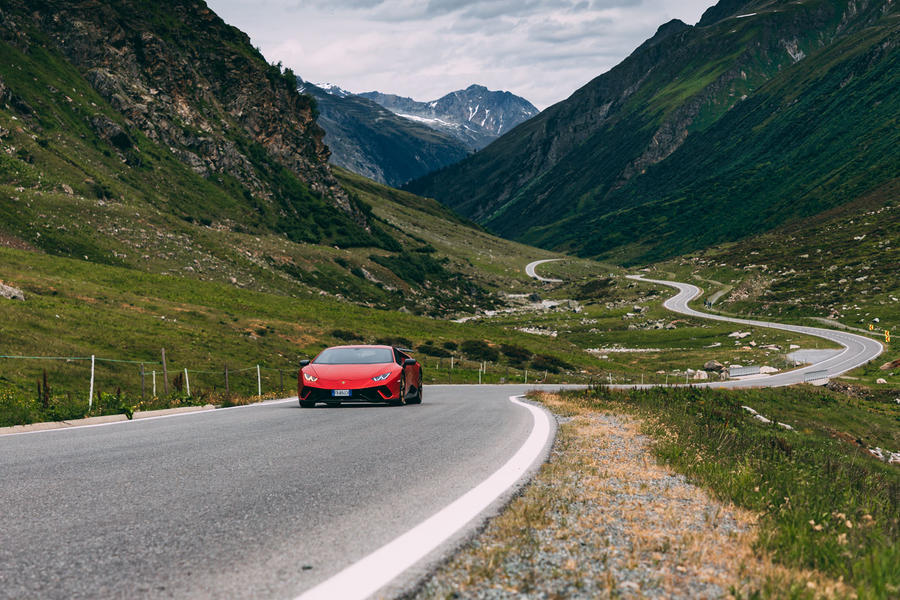 The Silvretta proves a tougher challenge, its corners tighter and slower. Though four-wheel drive and the V10’s lake of torque make short work of the switchbacks, what you really want here is an M2 Competition or Alpine A110. More slithery, even if a rain shower does lower the limits of adhesion enough for the Performante to show that its margin of initial understeer is impressively narrow before the tail starts to arc. Most Lamborghinis don’t handle like this, instead doggedly washing wide, but if the firm is to challenge Ferrari and Porsche on a level beyond superficial personality, future models will need to be more like the Performante.

After two days, we arrive at Via Modena, 12, 40019 Sant’Agata Bolognese with fly-pocked front radiators and having funnelled 300 litres of superunleaded into the Huracán’s 83-litre tank. I’m tired but not aching. In fact, I’d turn the car around and do it all again, because I’m desperate for another hit.

This article was originally published on 6 October 2019. We're revisiting some of Autocar's most popular features to provide engaging content in these challenging times.

15 countries in 24 hours with a Bentley Continental GT​

The ultimate motoring bucket list, according to Autocar writers​

Why Owners Don't Drive Them

Here in SW Florida I can answer this question, and it's not the answer some will enjoy. My son works at a high end  specialist dealership and weekly picks up this sort of car from an owners home to drive it for its annual service and then returns it a day or so later. The 'owner' is usually only a resident in their 'home' for a few weeks or months at most each year. This 'home' is actually a tax loophole. The owner has 'toys' at each of their homes. Sure, there are some owners that keep mileage low in order to retain value, but the majority of owners cannot give a s**t about retaining value like the average guy. In some ways it's sad that the cars don't get driven, but if these people did not buy them, Lambourghini would be forced to stop making them.

What a chore, you'd have

What a chore, you'd have thought lambo would have had their own lackeys to take the car home, bit cheeky asking you to do it.

You lucky sods, what an experience. As you wrote more mileage than most will do in a year, that is a shame, what you did all owners should experience, and then ask for a tour of the factory.