BACK TO ALL NEWS
Currently reading: Behind the scenes: Design secrets of the new Range Rover Evoque
UP NEXT
Bespoke ‘Silent Shadow’ to start EV era at Rolls-Royce

Behind the scenes: Design secrets of the new Range Rover Evoque

This is the challenge: redesign the Evoque to accommodate the electric motor, battery pack and control systems of a plugin hybrid drivetrain, meet stiffer crash regulations, carry more equipment and offer more rear-seat room and a bigger boot. And all this within the same footprint.

True, the first Range Rover Evoque is hardly the world’s smallest car, but that’s an awful lot of extra kit to find room for, never mind teasing out some extra space for back-benchers and luggage. So why stick to exactly the same dimensions and make the task harder? 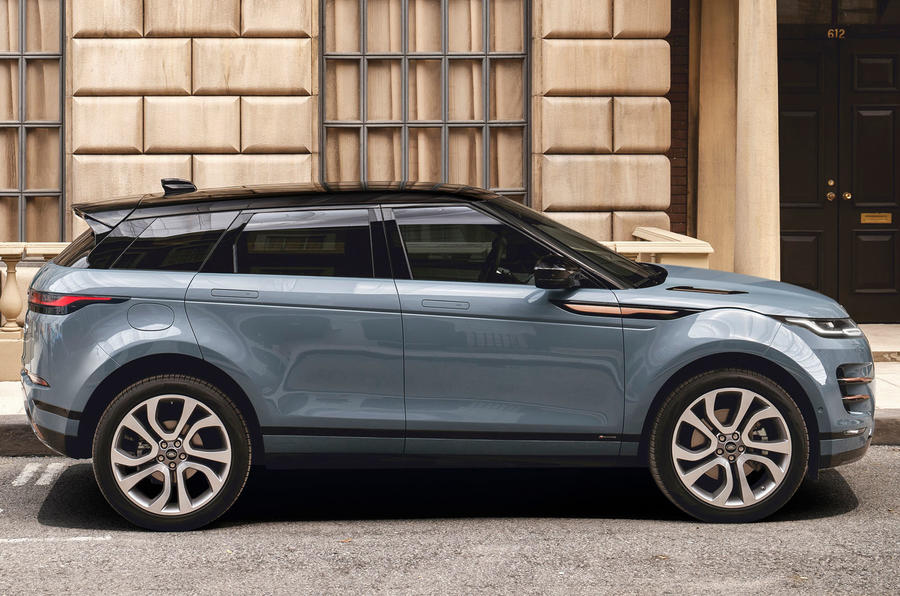 Because Land Rover’s market research established that owners of the original Evoque were adamant that it should not get any bigger. In fact, the new Evoque doesn’t occupy exactly the same volume of space as the old (it’s 1mm longer at 4371mm, 10mm wider at 2100mm, 14mm taller at 1649mm and its wheelbase, which has no effect on the footprint, of course, is 21mm longer at 2681mm). But it’s very close.

How, then, did Land Rover set about finding the extra cubic centimetres to accommodate these requirements? The process starts, explains vehicle package manager Christophe Sacré, with ‘a statement of intent’. Which is effectively a list of packaging wants majoring on visibility and internal space. They include preserving the driving position but lowering the steering column so that you’re arranged much as you would be in a Range Rover Sport, improving the visibility of the bonnet’s corners, parking the wipers out of sight, improving visibility around the door and interior mirrors, and maintaining or bettering visibility to the rear. In accommodation terms, the objectives were to preserve the original’s front seat space, increase rear room and enlarge the boot, which also had to look visibly bigger.

To understand how all this was achieved, we’re in Jaguar Land Rover’s cave. It’s disappointing as rocky undercrofts go – just an ordinary room in the Gaydon G-Dec technical centre with a large screen at one end, smaller screens to the side and an ageing Evoque seat mounted on a metal podium. 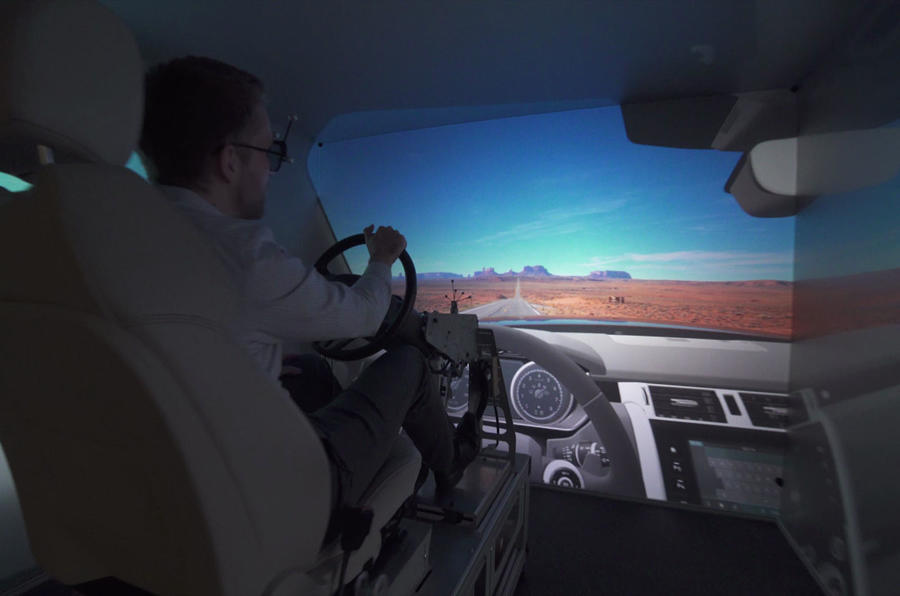 The magic has yet to come: it’s 3D and requires the wearing of special glasses or goggles. And goggle you will when you travel through the guts of an Evoque. You can see a sectional slice of its Ingenium engine as if a guillotine had opened it up, you can strip the car to a bare floorpan and swivel it every which way, you can inspect the lie of every hose, wiring conduit and fixing, and superimpose the new Evoque onto the old, in any area you like, to see how they compare spatially. Individual components are coloured, and with the expert pointing and shooting of an electronic gun, you can assemble or disassemble an Evoque piece by piece.

Smaller screens and pairs of goggles, meanwhile, provide a 3D view of the interior as if you were sitting in it, its realism complete enough that it’s easy to find yourself placing something on a virtual seat, letting go and hearing it drop to the floor. 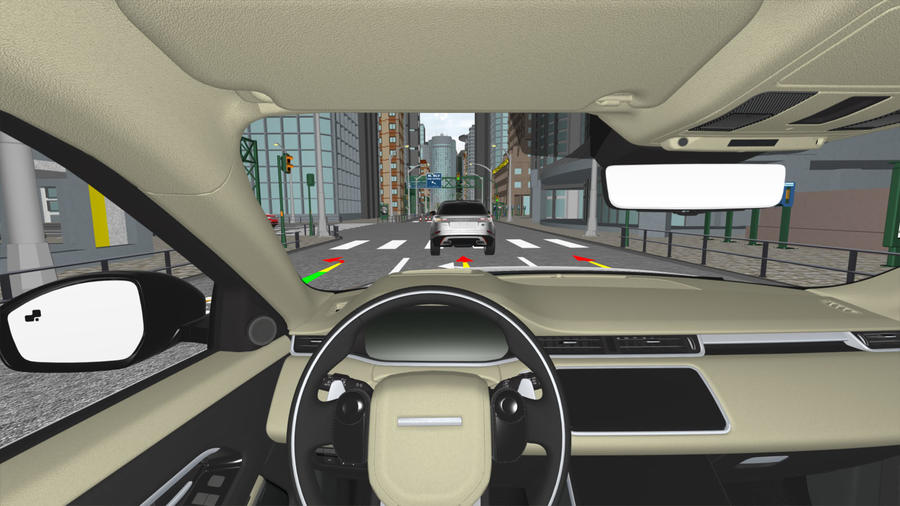 So how do they accommodate the demands of that statement of intent? Engineers and designers still use computer-aided design to shape components within a given envelope of space, but when there’s a conflict over real estate, the cave is the place for solutions. “It’s more democratic,” says Sacré. “We use it early on in the process, and we can see many things very quickly.”

These range from the big, such as the locations for battery packs, to the detail of switch placement. Battery pack location, a revised crash structure, improved rear room, the bigger boot and a new system of engine mountings were among the more challenging packaging tasks facing the new Evoque’s creators, as these illustrations demonstrate.

The original 2010 Evoque was based on Ford’s EUCD platform, shared with the Mondeo and Volvo XC60 in the days of the Premier Automotive Group. This forced some compromises that are absent from JLR’s new Premium Transverse Architecture (PTA), explains underfloor package manager Matt Eastough, allowing the release of much of the necessary extra space. “We’re using a new primary structure with a cast alloy front subframe that’s designed to crush,” he says. “Early on, we know we’ve got to fit a plug-in battery, and that influences the body design. Once we’ve found homes for these bigger bits, we can concentrate on different zones.”

This Evoque is divided into three zones – “it can be more,” says Eastough – while the original was split into two. The housing of smaller novelties follows, such as the ventilation chimney for the battery pack, all the while accounting for the need to waterproof the car. Despite its greater electrical complexity, this Evoque will wade 100mm deeper, to 600mm.

Seeing out of thick-pillared, big-mirrored modern cars is a problem that’s been chipped away at here. Sitting in highly accurate, virtual-reality cockpits for Evoques old and new confirms that wipers really do park out of sight, that you can see more of the roadside through the bottom corners of the windscreen and that you can see (marginally) more of the outside world past the interior and exterior mirrors. 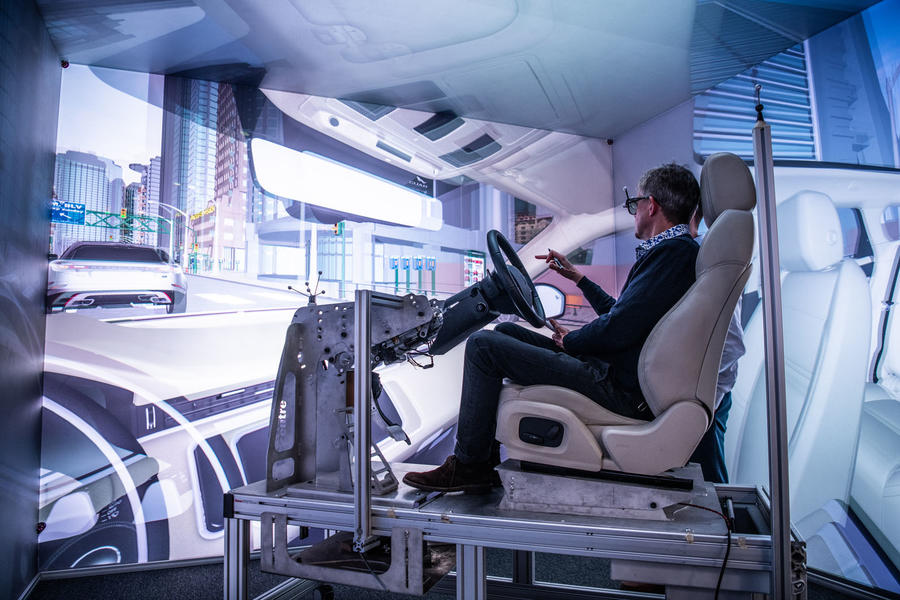 You can also turn around and see the rear of the cabin, the rather intrusive ‘D’ pillar confirming the usefulness of the optional video screen rear-view mirror, which ‘sees’ through pillars, headrests and heads to fill in the gaps. Sitting in this virtual cockpit “is very useful for the positioning of switches”, adds Sacré.

The rear footwell of a car might not seem a challenging area but, in the original Evoque, says Sacré, “it was small, bucket-shaped and not flat”. The new car’s lengthened wheelbase has produced a larger, leveller footwell, less intrusive seat runners and “the rear seat cushion sits at more of an angle to increase knee room. We’re optimising empty space.” 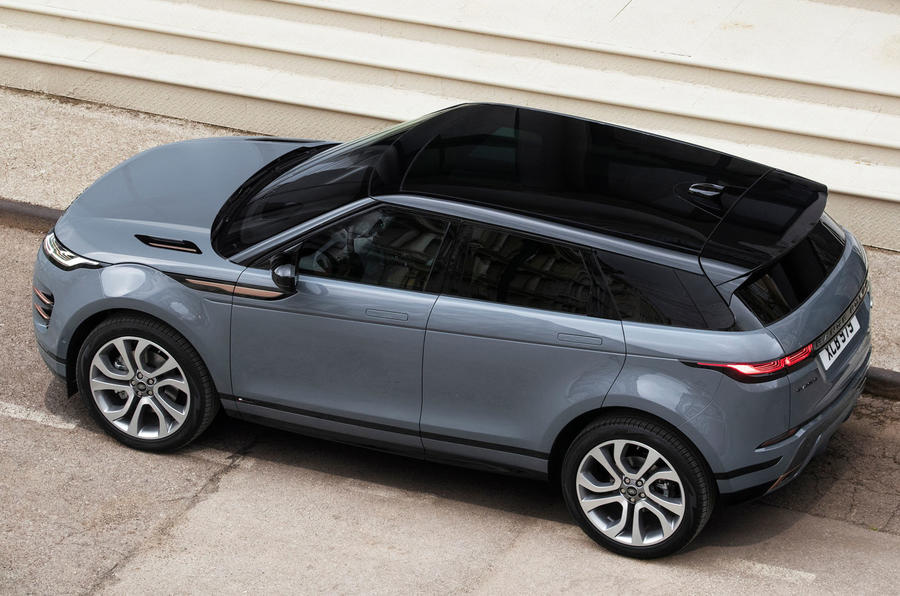 A rather busier-looking area lies beneath the front seat, which contains the so-called chimney – this being an outlet duct for the fan-driven cooling of the plug-in hybrid’s battery pack. Sitting beside it is the subwoofer, which is now half the size of the previous bass-box.

Widening the boot, explains Sacré, was achieved “by removing or optimising the size of brackets behind the side panels, fitting a smaller wiring harness and optimising the shape of the body-in-white structure”. The original Evoque carried Ford components that have also been redesigned. The result is a boot of 591 rather than 575 litres, and a between-the-arches width of 1301mm – a useful gain on 1000mm before. 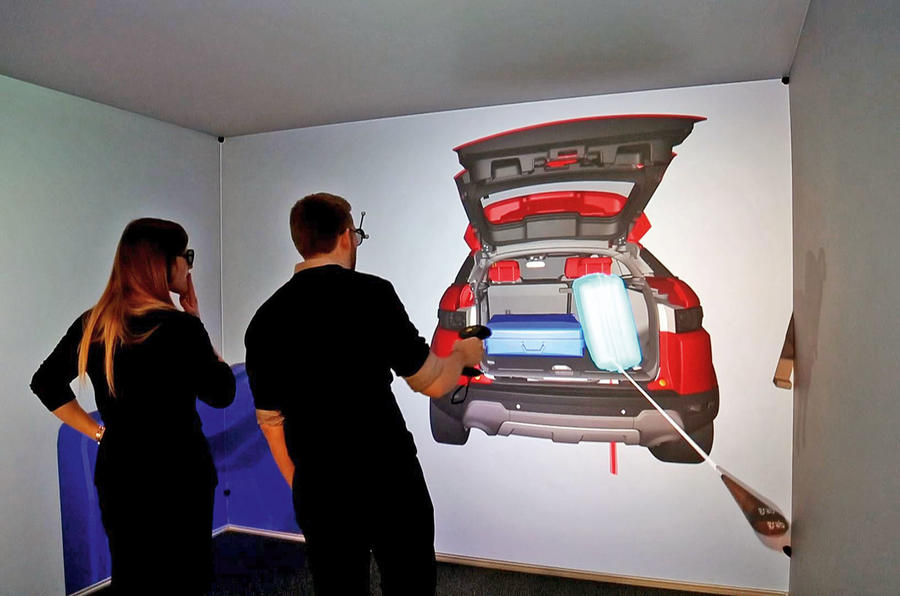 There’s a bigger side pocket too.

A new platform that doesn’t have to be shared with outside brands offers the chance to optimise other areas, such as the engine mounts. “The offside engine mount bolts to a longitudinal – a very solid part of the car – but it’s also a lump of mass in the crumple zone,” says Eastough, and has to be designed for crash compatibility. The new engine mounts noticeably improve ride and refinement. “Another struggle is the additional hardware for emissions – a bigger catalyst and sensors,” adds Eastough. “You’ve got to plan.” 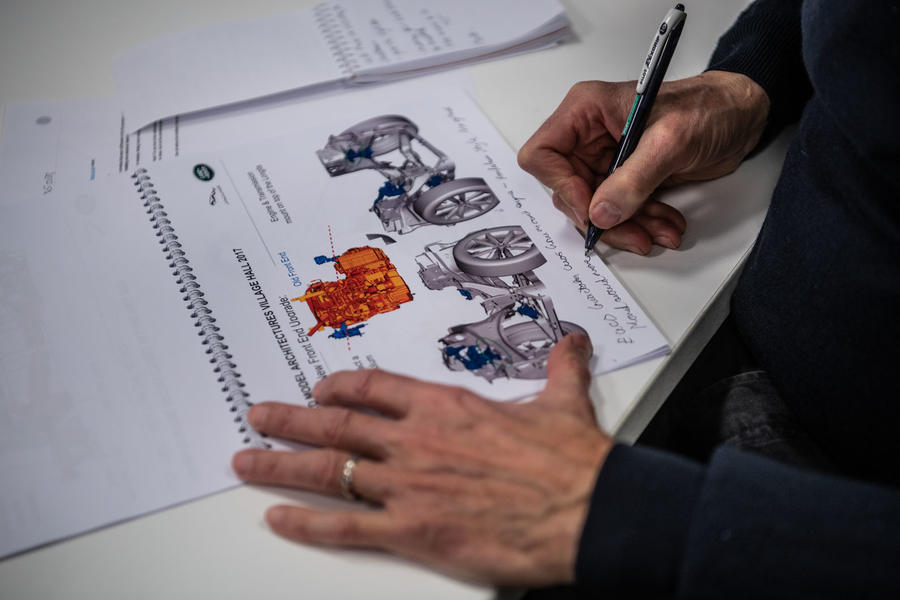 Chief interior designer Paul Ray must furnish the bare interior of this reimagined Evoque and admits that, occasionally, his team fill in some of the nooks and crannies eked out by their engineer colleagues in order to produce more flowing lines. “We take space away to create the illusion of more space,” he says. “If you squeeze the carpet, it can look untidy if it literally follows the contours.” So every last cubic millimetre of space won in the rear footwell may not see daylight, but it’ll certainly look neat down there.

Like his engineer colleagues, Ray has to find space for more kit, such as massage and cooling seats. “It still has to feel roomy, and that’s difficult with a smaller car,” he says. Again, the cave helps. “It makes decisions quicker, and you feel more confident about those decisions,” concludes Ray.

Trendiness is the real reason for nearly all of western culture purchases. You can apply that to nearly everything on sale. I feel that the days of choosing a product on its capabilities is gone replaced by a need to follow a trend. Clever manufacturers know and control this and increase their profits by selling an acceptable product for a premium price. In the automotive world it’s the Germans that have mastered this. Other manufacturers are forced to emulate this and subsequently make the customer pay higher prices.

I wil believe a 591 litre boot the day I count that many 1 litre bags coming out of one!

There is no disputing its not capable and no doubt is a bit better than the 'old' one in near  all respects. But I tried pricing one up on our lease site. A basic 180bhp 4wd model didn't come in too bad initially, high residuals help. But by the time I added a lot of stuff I would get as standard on a mid range CR-V hybrid (also with 180bhp, 4wd and a lot less tax!) it had hit a ludicrous £45K and the lease was eyewatering. Yes I would be more 'trendy' but I would be no more comfortable, no faster, no more space, no less not stuck in a bit of UK snow.. for £10K+extra tax more.

As we all know, it's the same footprint because it's the same tank-heavy platform. That was the first mistake. The second is launching a vehicle that interior tat aside looks rather too similar to a design already found on social housing estates throughout the land. An old idea built on old technology will enjoy the sales it deserves.

As we all know, it's the same footprint because it's the same tank-heavy platform. That was the first mistake. The second is launching a vehicle that interior tat aside looks rather too similar to a design already found on social housing estates throughout the land. An old idea built on old technology will enjoy the sales it deserves.