BACK TO ALL NEWS
Currently reading: 2019 set to be Volkswagen's "most important year"
UP NEXT
New Lamborghini Countach: epic UK road trip in reborn icon

This year will be one of most significant in Volkswagen's history, according to company bosses.

Not only will the production version of the new ID electric hatchback be launched at the Frankfurt show in September, but also the Mk8 Golf will be unveiled just a few weeks later. Volkswagen will also be launching the T-Cross in May this year and a five-seat compact SUV for the US market.

The company also predicts that 80% of all its vehicles globally will be based on the MQB platform, which was first used in 2012.

Volkswagen says it wants to be the world’s "number one brand in e-mobility" and expects to be building 1 million battery electric vehicles (BEVs) by 2025. The company claims that its new BEV production plant in Zwickau, Germany will ensure that the entire ID production process is CO2-neutral.

It says the battery cells will be manufactured with "green electricity" and that Zwickau will also use this to manufacture the ID itself, while all ID models will be recycled at the end of their working lives.

Zwickau, which has received a €1.2 billion (£1.0bn) investment, will have a capacity of 350,000 cars a year by 2021 and eventually produce six different models for the Volkswagen, Skoda and Audi brands. 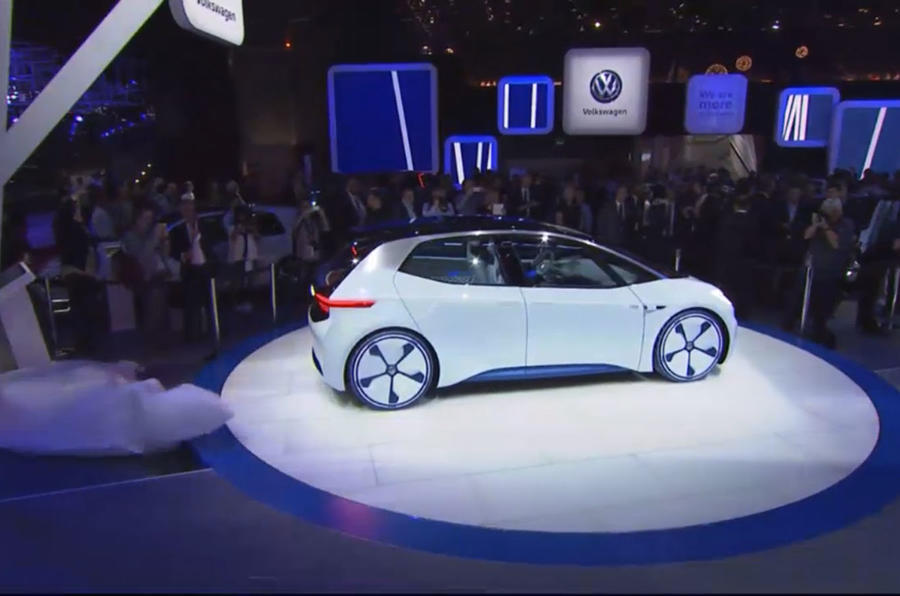 Pre-orders for the ID will begin on 8 May and shipments will start at the end of the year. It and the new Golf will be connected to Volkswagen's new We network ecosystem, wherein all vehicles will be given a registered identity, allowing Volkswagen to have direct contact with individual drivers.

These drivers will also have increasing access to live information such as traffic, weather and parking availability, as wireless software updates and contact with service departments.

Company bosses say that over the next few years, the connected cars will have around a billion lines of software code – around 100 times more than a smartphone.

Volkswagen also revealed that it expects to dramatically bring down its fleet CO2 emissions by the beginning of 2020, from around 125g/km to around 95g/km. It says it suffered from a shortage of petrol engines in 2018 as the shift away from diesel in Europe was more marked than expected.

That Passat is looking a bit

That Passat is looking a bit long in the tooth, VW are focusing on their SUVs while wondering why old saloons don't sell. (They withdrew the Jetta a few years ago, a car based on the Golf previous to the outgoing model)

That being said, WAG has more brand names - thus perhaps a cheaper version of the same car shall be available under a different brand name, however unlikely as cheap as 18K.

Volkswagen's most important year will always be 1938 when the first 'People's Cars' rolled off the production line.