From £20,0908
VW’s new smallest SUV has refinement, versatility, maturity and polish – all the brand’s familiar qualities. Short on fun factor, perhaps, but not on substance
Open gallery
Close

It’s a strange truth at the moment that making a success of producing small cars actually seems to mean turning them into slightly bigger, taller ones. If a car maker wants profitability out of his global supermini line today, in other words, he’d better have a downsized crossover somewhere within it.

The European market for these high-rise five-doors has doubled in size over the past five years, and is set to double again in the same time frame; and even if you're the biggest car maker in the world, you simply can’t afford to continue to pass on a share of a growing segment like that. And so, having watched as its rivals made all the money, Volkswagen has, in its usual style, carefully considered what its product positioning should be; laser-targeted the juicy middle of the market on price, size and specific role; and then taken its shot.

So enters the new Volkswagen T-Cross. A couple of inches longer and just under six inches taller than a Volkswagen Polo, the T-Cross is still smaller at the kerb than its main crossover-class rivals. VW dubs it ‘an urban SUV’ rather than an off-roader; there’s certainly no four-wheel-drive version.

At launch, you can choose between a pair of 1.0-litre three-cylinder turbo petrol engines, which drive the front wheels through either manual or seven-speed twin-clutch gearboxes. Neither develops more than 113bhp. Our first taste of the car came in the more powerful 1.0 TSI 115 - in SEL trim. 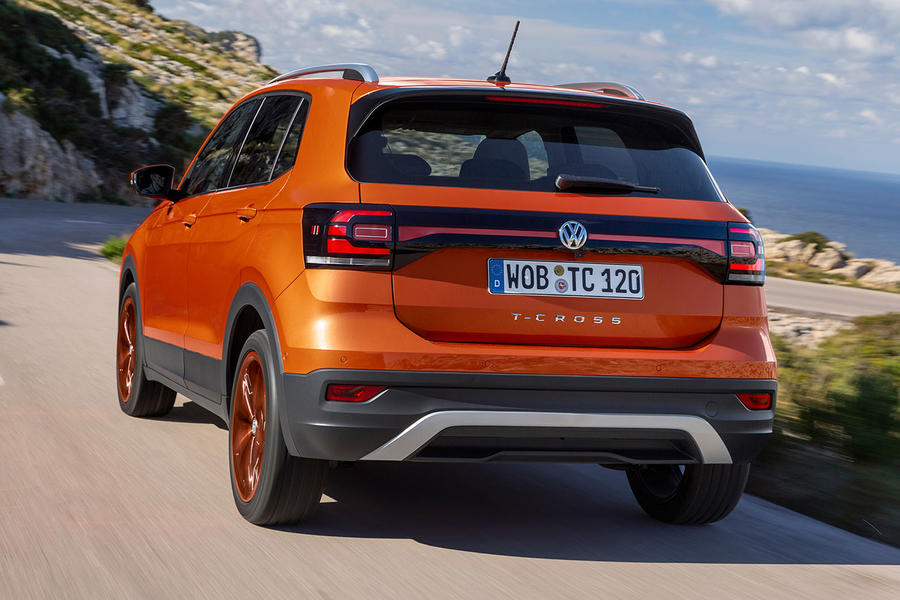 A compact crossover doesn’t get out of the starting blocks, for this tester, if it doesn’t offer discernibly better space and convenience than a regular supermini – and plenty don’t. The T-Cross does.

Its cabin feels wider than many in the class, with good knee and elbow room up front and enough second-row space for six-foot adults to sit comfortably line astern. Boot space isn’t massive: 385 litres is only 10% bigger than in a Volkswagen Polo, but that’s with the standard-fit sliding back seats set aft (it rises to 455 litres otherwise).

The T-Cross’s cabin struggles just a little bit to exude the superior aura of perceived quality you expect from a Volkswagen. It’s one plainly built to a price, and made predominantly of mouldings that are hard to the touch - though they’re generally robust, securely fixed and pleasant enough.

So instead of with material plushness, it’s with the technological ritz of VW’s digital ‘Active Info’ instruments and some impressive infotainment features that the T-Cross seeks to raise itself up on ambient allure. In our SEL-spec test car, the effort was just about successful.

There’s an even more distinguishing, highly polished sheen about the car’s driving experience, though. Our 113bhp 1.0 TSI test car rode with an abiding sense of settled comfort and isolation that you don’t typically find in cars its size, and handled with the predictability and measure so typical of Wolfsburg.

This isn’t a car preoccupied with a contrived sense of thrusting, youthful energy. It’ll be driven by a great deal more retired couples en route to the garden centre than twenty-somethings on their way to the surf shop – and it behaves like a car well-reconciled to that reality. It’s absorbent and quiet in town; is wieldy and agile enough around bends and car parks, while still feeling natural; but, above all else, is entirely intuitive and easy to drive.

VW’s 1.0-litre engine develops a useful hit of torque and makes performance feel strong enough and fairly flexible. It doesn’t like to rev like the best turbo triples, though; it can feel slightly unresponsive at times; and it’s a little bit prone to a stall when manoeuvring. Refinement is very good, though, and economy seems more than respectable as it approaches 50mpg at a moderate cruise. 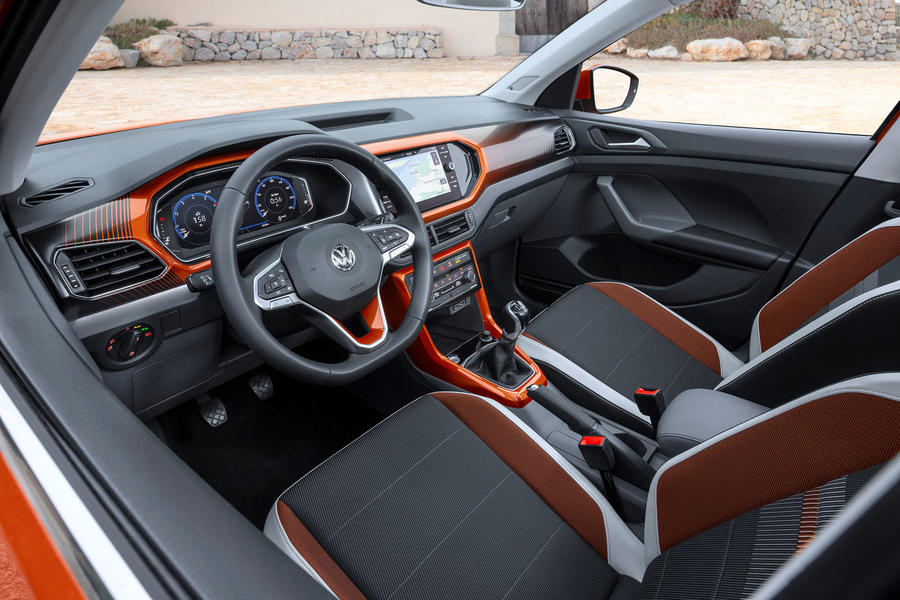 A competitive showing on value for money will be key to the T-Cross’s UK market success, so we’ll wait to confirm the car’s ultimate status among its peers until we’ve driven a mid-spec car on British roads, and had a closer look at the car's ownership credentials.

It’s a shame VW hasn’t quite reproduced Golf-level quality on Polo underpinnings here, but in most other ways you could give up a Golf for this car without regretting it. Suffice it to say for now, if this isn’t a class-leading car, it won’t miss the mark by much.

The T-Cross may not be as funky, flashy or sporty as some in the crossover niche, but neither is it flaky, flimsy or frivolous. It’s a mature, considered and very complete product: a properly executed VW of substance, and a car to be taken seriously. Which, it seems to me, is exactly what the segment has been missing. 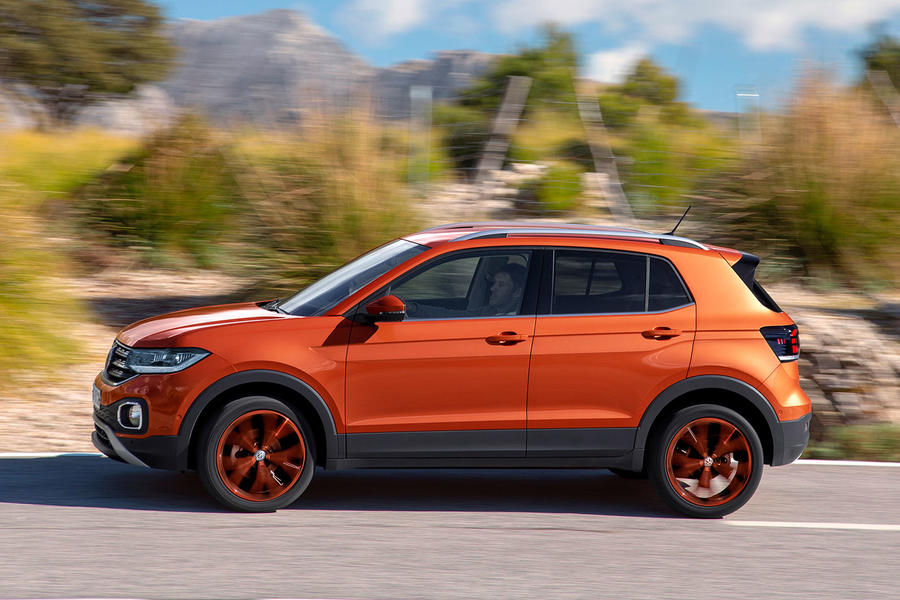 ... a Sport Utility Vehicle. Not even close.

Calling it an Urban SUV brngs to mind Ford's European Fusion which they designated an "Urban Activity Vehicle", aimed at young urban families. While constant demand had it in production for no less than 12 years the irony is that it was bought by "third agers" who appreciated it's raised height providing excellent ingress and egress, if not it's s-l-o- w, elk averse, steering. It however illustrates everything that's gone wrong at Ford that it was replaced by a cheapstake "One Ford" with a Brazilian designed, India (now Romania) built "EcoSport"(?) which is only marginally less dire following what must be fortune costing re-designs spent trying to lift it out of it's crude origins. To add insult to UK customers the antiquated, spare wheel carrying, side hinged, rear door opens the wrong way for RHD UK (and India) markets. Bit fresh that Ford in the US chastises the UK market, when selling such a vehicle - he'd be counting the profits if they built a decent car.

Until they compensate U.K. buyers for the dieselgate scandal vw products need to be boycotted.