Hyundai will seek to "popularise hydrogen" by 2040 with a raft of initiatives aimed at positing the fuel as an alternative to all-out battery electrification, and not just in the private vehicle sector.

Following on from yesterday's wide-reaching commitment to making its vehicle fleet all-electric in Europe by 2035 and globally by 2040, Hyundai has voiced a commitment to mass producing hydrogen fuel cell electric vehicles (FCEVs).

Further to that, the company estimates that FCEVs will be similarly priced to equivalent battery electric vehicles (BEVs) by 2030.

Leading the hydrogen charge in the passenger sector will be a new hybrid sports car referred to at concept stage as the Vision FK. Previewed as part of Hyundai's hydrogen strategy presentation, it's claimed to pack more than 671bhp, accelerate from 0-62mph in less than 4.0sec and achieve a range of more than 373 miles. 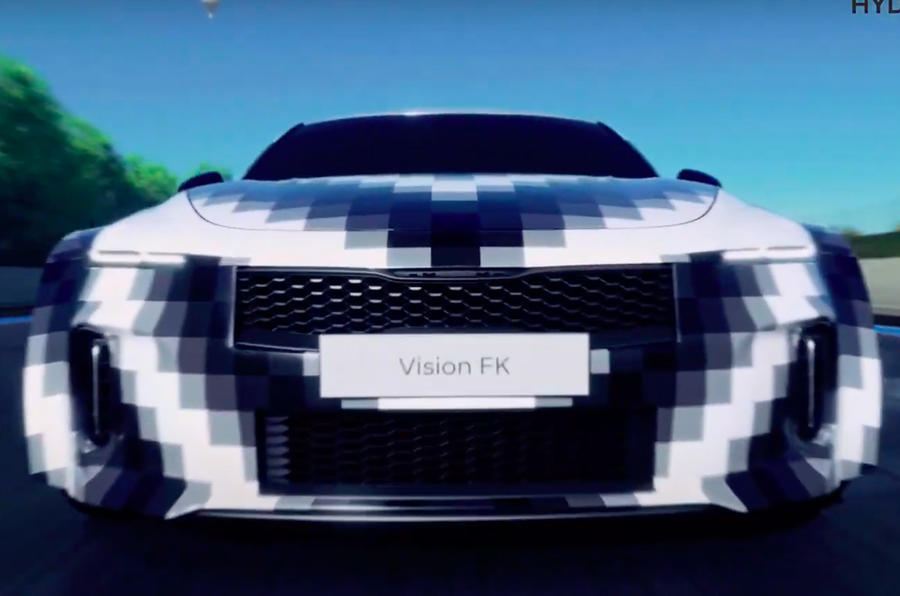 Unusually, the Vision FK pairs its hydrogen fuel-cell stack with a Rimac-developed battery-electric powertrain driving the rear wheels, which would make it the first car to use both systems, assuming it makes production unchanged.

Hyundai has previously suggested that future models from its N performance division would adopt hydrogen powertrain solutions, and the Vision FK concept is the first physical sign that they will indeed "use a combination of both" battery and hydrogen power sources, as suggested by chief marketing officer Thomas Schemera earlier this year.

Hyundai is developing the Vision FK as a "rolling lab" – similar to the previous RM19 mid-engined concept - and Rimac, in which Hyundai holds a substantial stake, was chosen as an EV technology supplier as Hyundai's own E-GMP architecture couldn't facilitate the "very challenging" packaging.

Rimac, the brand explained, has "specialised batteries" available for such an application, likely related to those used by the Rimac Nevera hypercar.

Hyundai also confirmed plans to use hydrogen powertrain technology in a motorsport application in the coming years. Speaking exclusively to Autocar at the Munich motor show, Schemera said: "How many hydrogen race series are there in the world? Zero. But maybe in four years things could be different.

"Motorsport is a very good method to prove your technology under extreme conditions. Motorsport can be the way to prove new technology and how reliable it is – and in terms of hydrogen that makes things interesting because not that many companies have it – and we believe our fuel cell technology is at the forefront."

No date for the Vision FK's production has yet been given, nor has Hyundai given an indication of such a system's potential for a roll-out to other models. However, given that a prototype of an Ioniq 5 N was recently sighted, it's clear that both battery and hydrogen power will be crucial to the brand's electrification plans.

Indeed, a brand spokesperson at the Munich motor show yesterday said: "We're committed to both battery and fuel cell technologies. BEVs like Ioniq 5 can take long journeys with short recharge times," and so can FCEVs, which means "they don't need big heavy batteries".

Hyundai had earlier confirmed plans to heavily update the existing Hyundai Nexo SUV – one of just two mainstream passenger FCEVs on the market – in 2023, before launching a pair of new standalone FCEVs by 2025, but now it has detailed the upgraded hydrogen powertrain that will underpin this shift in focus to hydrogen.

Its third-generation fuel-cell stack – following on from the first in 2013's low-volume ix35 Fuel Cell and the second in today's Nexo - will be available in two power outputs: 100kW and 200kW, the former of which is claimed to be 30% smaller than the system currently in use. It will therefore, Hyundai said, be readily usable in a wide variety of vehicle types, while the 200kW version is geared towards exclusively commercial applications.

More significantly, the third-generation stack promises a significantly longer usable life than today's system. Hyundai estimates the Nexo's current powertrain is capable of 5000 hours or 100,000 miles of usage, but the new system is projected to boost those figures by between 50% and 100%, with the "high-durability" versions capable of some 310,000 miles of use - nearly double the warranty mileage of an ICE-powered Hyundai model.

The 134bhp unit is also usable as part of a much larger power system, with a modular arrangement capable of providing up to 1MW of power in large ships or even for IT companies. In smaller commercial applications, such as MPVs, buses and trams, its height can be reduced by 25cm to enable more flexible fitment solutions and thereby maximise usable interior space.

With this new stack in operation, Hyundai has confirmed each of its commercial vehicles will be offered with an FCEV powertrain by 2028.

This ambition, it says, will make Hyundai the "first global auto maker to realise such ambitions for commercial vehicle transportation and will further help facilitate the transition to sustainable mobility".

It's already set to be first to market with a hydrogen-powered HGV - the Xcient - in 2023 and is expanding on its first-mover position by unveiling new concepts that could cement hydrogen as the primary fuel used by the commercial vehicle sector.

The Trailer Drone concept, for example, is a hydrogen-powered container transportation system that can operate fully autonomously for distances of more than 620 miles. It's not a mere evolution of the hydrogen technology used in Hyundai's passenger cars but rather the result of extensive engineering work to "redefine how a container manoeuvres". 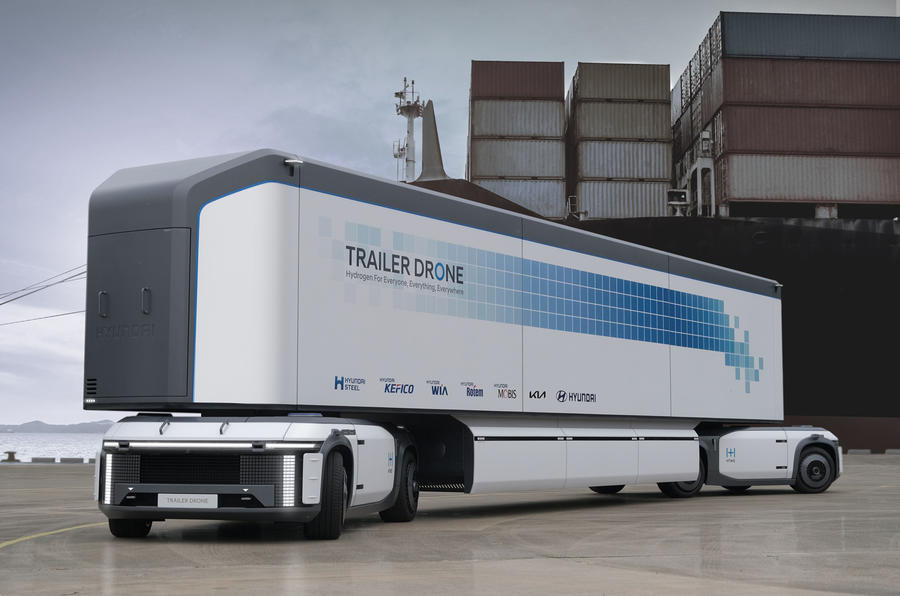 In essence, the system centres around a hydrogen-fuelled bogie that sits underneath the container - much like a rail freight carrier - and moves the container autonomously through shipyards and "tight urban environments". It's capable of four-wheel steering, can move side-to-side and can be mated with other units to form a sort of train.

By 2040, Hyundai predicts, hydrogen will be used not just in mobility solutions but also as a power source in various other industries and sectors.

@Electrohead Very true, and that hydrogen production is responsible for 2% of global GHG emissions.

Vertigo 7 September 2021
The Apprentice:
I am glad its still being developed. Whilst it could be argued its inefficient to say, use electricity to produce Hydrogen only to turn it back into electricity which is true. EV's are not faultless either. from the moment you unplug it, you are carrying a heavy 'fuel tank' that despite emptying gets no lighter so a large part of your energy use is dragging it around at all times. Less of an issue with a hydrogen tank vehicle.
Room for both to explore.

Well, that's the falsest equivalency I've heard today. An empty fuel cell car is only 5-6 kg lighter than a full one - and either way, roughly on par with a pure-electric of similar size. (Hyundai Nexo = 1874kg, Ioniq 5 RWD = 1830-1990kg.) The fuel cell stack, energy buffer, armoured storage vessel and filler system are what constitute the vast majority of FCV-specific weight, not the hydrogen itself.

The fuel cell vehicle's still using three times as much electricity as the electric vehicle, regardless of how full the tank is.

Google pays for every Person every hour online working from home job. I have received $23K in this month easily and I earn every week $5K to 8$K on the internet. Every Person join this working easily by just open this website and follow instructions,