BACK TO ALL NEWS
Currently reading: Under the skin: How hydrogen could fuel the future of plant machinery
UP NEXT
First drive: 2022 BMW XM prototype

The writing is on the wall for diesel cars, and the same might be true for diesel machinery too. So how will we replace it?
Open gallery
Close

With a ban on new petrol and diesel cars and heavy vehicles looming, construction machinery manufacturer and consummate innovator JCB thinks the writing is on the wall for diesel in plant machinery too.

There’s a popular misconception that the impending sales bans apply to the internal combustion engine overall, but they don’t, which is why JCB is convinced a switch to hydrogen-fuelled engines is the way forward for its machines over five tonnes.

The British company’s philosophy is straightforward: the easiest way to achieve zero carbon is to have no carbon in the fuel. Engineers have reached a stage where they are confident that zero tailpipe emissions are achievable, so no CO2, no HC and no NOx, just power, water and heat. One of the biggest challenges they face, in fact, is what to do with the water emissions.

Why hydrogen? JCB makes award-winning smaller electric machinery, but for larger machines it has established unequivocally that batteries won’t work because of cost, weight and time to charge, when construction machinery must often run continually to earn its keep. It has also developed a fully operational fuel cell-powered 20-tonne excavator, and with it demonstrated that, as well as being expensive, fuel cell powertrains aren’t yet robust enough for the rigours of a construction environment.

The latest turbocharging, direct injection and spark ignition technologies mean that hydrogen is so effective in combustion engines today that the spectre of NOx can become insignificant. The prototype hydrogen engines are based on the JCB 448, a 4.8-litre four-cylinder unit that’s new from the cylinder head upwards. Hydrogen direct injectors are centrally mounted and there’s a new fuel rail carrying compressed hydrogen to them and a larger, variable-geometry turbocharger. Hydrogen can be run far leaner than either petrol or diesel and it burns reliably at an air/fuel ratio of 100:1. By way of contrast, petrol engines struggle as the mixture leans out, to the point of misfire. 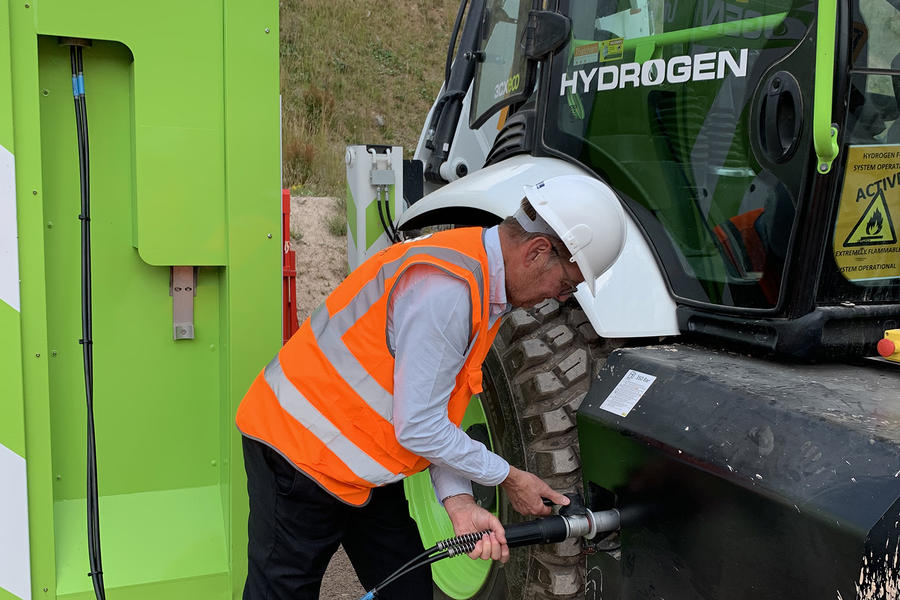 Why does this matter? NOx is produced at high temperatures, so the leaner hydrogen is burned, the cooler the combustion and the lower the NOx. Hot spots in the combustion chamber are NOx generators with any fuel, and JCB is working with experts at the Technical University of Aachen to perfect the mixing of hydrogen and air, drawing on their skills in computational fluid dynamics (CFD).

Airflow through the cylinder head is crucial. With diesel engines the aim is to generate a ‘swirl’ in the incoming air-fuel mixture, while with petrol it is ‘tumble’. JCB is experimenting with both as well as a combination of the two, which engineers call ‘swumble.’ Unlike petrol, hydrogen is easily ignited by unintended sparks sometimes generated by standard ignition systems, so the 448 hydrogen engine has individual ignition coils on each sparkplug, derived from high-end motorsport.

Pre-production engines are expected late next year and will be a straight swap for the diesel engine in its world-renowned 3CX Backhoe Loader (a digger to you and me), along with the diesel tank that’s substituted for a couple of hydrogen tanks. Installation is so straightforward that the engine can be easily retro-fitted to diesel machines. Hydrogen engines will cost more or less the same as the diesel version, with hydrogen supplied on building sites from mobile tankers, as diesel is today.

The other often mentioned disadvantage with batteries is the production process; how environmently friendly are they in the extraction of lithium and the other rare metals they require and is continued and increased supply of these guaranteed?  It also looks like current BEVs will be the plasma televisions of tomorrow: expensive and then superceded by a cheaper, better solid state technology.  However, Lord Bamford has claimed that batteries (and hydrogen fuel cells) will always be inflationery because of the demand for these rare materials if no other sources are discovered. As for hydrogen, it seems unbelievable to me that so much effort has gone into expensive, fragile fuel cells when Lord Bamford has shown us that it can simply be burnt in a near-conventional ICE.  BMW tried this idea some years ago in a prototype 7 Series but gave up on it - it would be interesting to know why. It is also certainly interesting to try and guess where all this is going;  will governments back a sustainably sourced hydrogen infrastructure as they seem to be claiming?  Perhaps we can then save the ICE, certainly for sports cars, bigger SUVs, trucks, buses and trains.

The problem with batteries is energy density and recharge time, especially in a commercial environment such as haulage, construction and agriculture. Personally I would favour good old biodiesel produced responsibly (absorbing more carbon from the atmosphere than what is subsequently released and using existing proven emissions technology). If hydrogen is the solution then it will apply equally to haulage which means roadside supply and keeps the door open for hydrogen cars - I still think that current lithium battery technology is an intermediate and potentially in the future obsolete step.