BACK TO ALL TOP 10s
Currently reading: Top 10 Best convertibles and cabriolets 2021
UP NEXT
Crossover hatchbacks

An 'al fresco' driving experience is a great way to refresh the senses. So if a convertible or cabriolet is on your shopping list, let Autocar help you to determine which one might be best for you
Share
Open gallery
Close
Share story

Imagine the scene: the sun is out, the weather is warm and a twisty road opens up in front of you. This is the opportunity to enjoy your drive in a way in which you seldom get the chance. What could make it better? Of course, the ability to remove the roof and let a cool summer breeze in.

Convertibles come in all shapes and sizes, and you can choose a long-legged cruiser, a high-performer or a fashion trinket. The common theme will be the ability of retracting back the roof and letting in the glorious weather.

To make our list of the best, though, a convertible needs to offer security and comfort when the weather turns sour, as well as proper usability. We don't, by and large, classify affordable sports cars here; to us a cabriolet or convertible is a different beast, more usable and rounded than a true sports car and suited to more broad use. So which are the best of them?

Our cabrio class champ is a car that perfectly typifies why convertibles and sports cars are quite different things. The Audi TT has, since birth, played the classy, stylish, usable, extra-special everyday driver better than the out-and-out driver's car; and it continues to now even in convertible form. Keen drivers might find the Roadster a little too easy and unchallenging to drive, but it's that undemanding ease of use that makes the car appeal to those who only want a dash of seasoning with their choice of wheels.

The Audi’s fluid handling and zesty petrol TFSI motor make it fast enough and reasonable fun when you want it to be, even in entry-level form. The engine range kicks off with a 194bhp 2.0-litre option but ranges upwards to include 242-, 302- and 394bhp choices, with a choice of either front-wheel drive or four-wheel drive. And that mechanical flexiblity is also a key part of the car's strength every bit as important as its solidly built and appealing interior or its catwalk-model looks.

No need to make a head versus heart decision then. Put simply, this is a 'want-one' kind of car. You want it? You’ll love it. 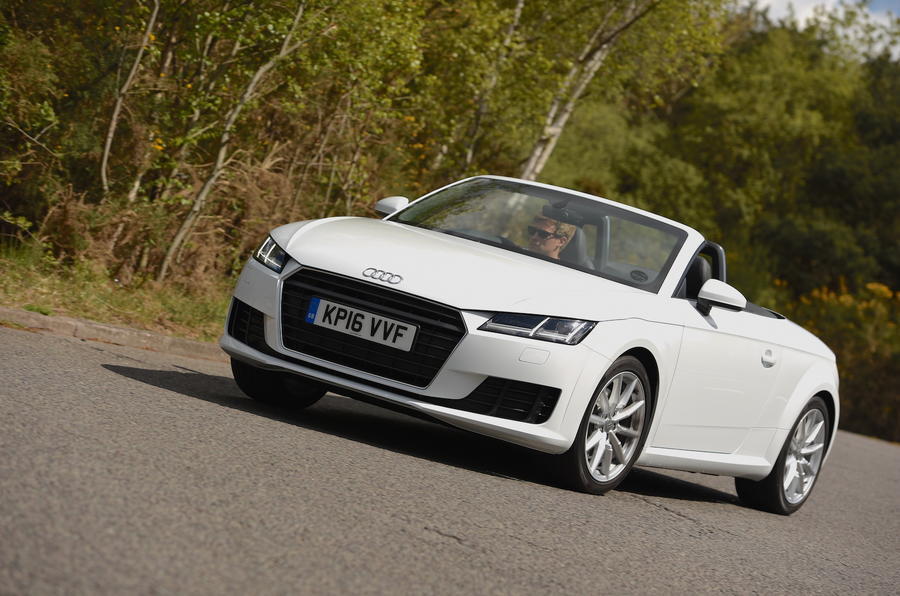 Mercedes' cars are seldom at their best when targetting driver appeal; that's why it took an out-of-house performance department like AMG (now brought in-house, of course) so really inject some dynamism into its offerings. That fact also makes Mercedes' cruiser cabriolets well-equipped to do well in this chart, and they are, by and large, machines of a mature, secure and self-possessed charm which are great at enriching a roof-down journey without necessarily enticing you to breakneck speeds.

Summer's coming and so is Audi's TT Roadster. It shares the coupé's chiselled good looks, but is it as sharp to drive?

The best of them is the middle-sized one, the E-Class Cabriolet, which offers proper four-seater space and usability, and somehow confers greater stature than the smaller C-, without trespassing to the price levels of the open S-Class and SL-. The car's got all the technological refinements and luxury cabin lures of other E-Class bodystyles, and feels genuinely rich and enveloping to travel in. Its ride is comfortable and quiet, its character genteel and long-striding; but it needn't be slow or exciting.

The engine range takes in a surprisingly broad selection of diesel options (of both four- and six cylinders) and also includes four- and six-cylinder petrols, although we'd recommend the six-pot options for refinement and smoothness better-suited to the role of a cruiser. Then there's the range-topping -AMG E53 4Matic+ with its 429bhp hybrid powertrain, which mixes speed and involvment with efficiency and good-manners very effectively indeed. 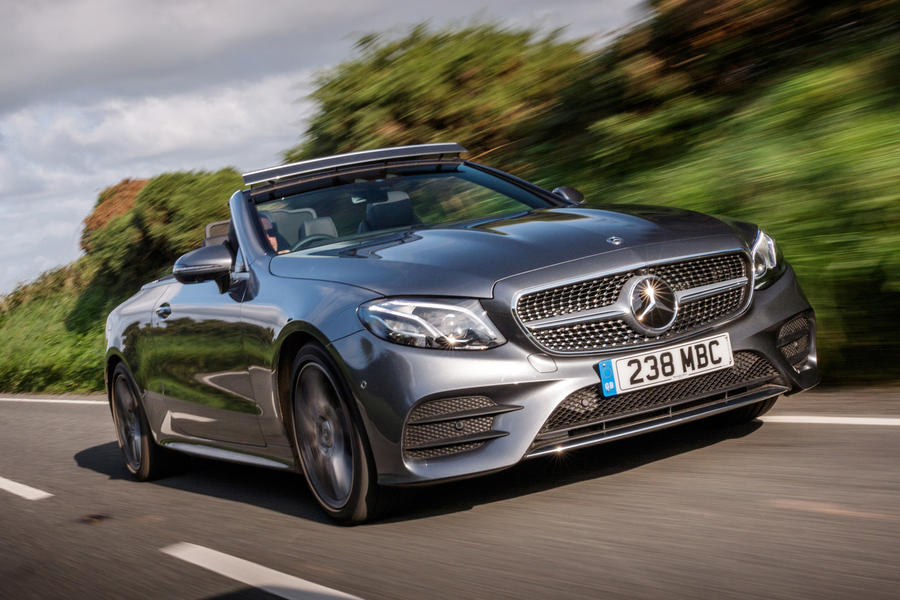 There is evidence that people will pay close to £20,000 in this class for cars that are slow, unresponsive and impractical and feel flimsy and imprecise on the road – provided they come with a roof that lets the sunshine in. Against that background, BMW could have got away with ‘phoning one in’ with this car, but to its credit, it hasn’t.

The Mini Convertible feels like a much better-engineered car than it needs to be, one of integrity and attention to detail, improved significantly over the car it replaces. It comes in Cooper, Cooper S and Cooper Works forms, the last of those topping 200-horsepower for those who want open-top motoring speed and fun.

Most importanly, the car opens up the vivacious Mini driving experience to the elements without compromising it. And given that open really does mean open with this car and doesn’t with most of its rivals, that’s no mean feat. 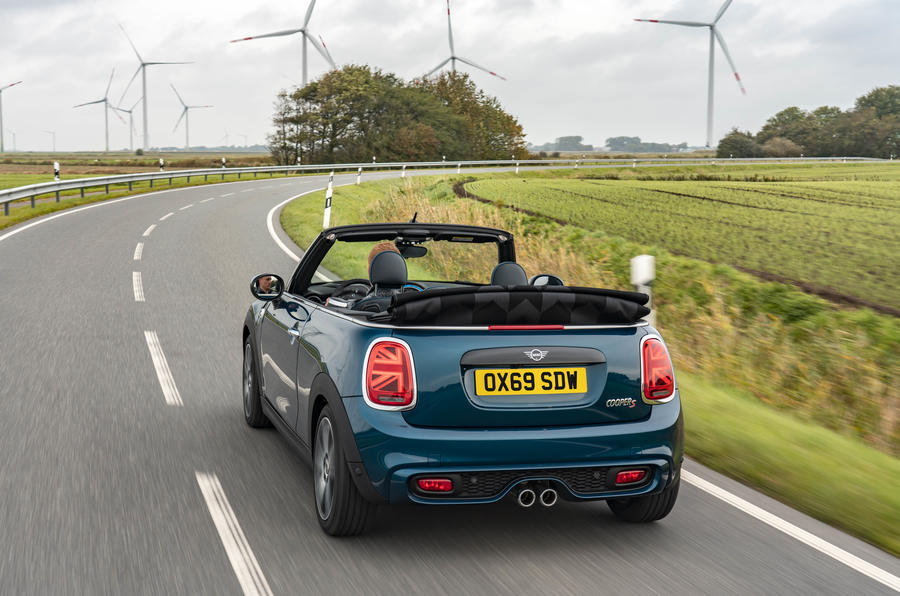 Little on four wheels is better at slowly sucking out the marrow from a long summer day than a Morgan. These singular, traditional, aristocratic English roadsters are a breed apart both from converted cabriolets and more modern, conventional sports cars. They look like nothing else and, despite having BMW engines and a new all-aluminium chassis, they still drive in exactly the same way.

Surprisingly rich and laid back in some ways, a bit rough and physical in others, and yet with plenty of turbocharged pace when you need it, the Plus Four can be a busy, testing car to drive quickly. It's anything but refined, and both body control and outright grip have appreciably modest limits. But deploy the car at just the right pace, on narrowish country roads where its narrowness is a virtue and its medium-paced steering suits the radius of the corners ahead, and it's a rare pleasure to take in.

The car's six-cylinder sibling the Plus Six is quicker and grippier still, of course. But it's the Plus Four which is more ideally suited to pootling down a sunny British lane with the roof down, and that is able to enrich your journey and add sense of occasion like few others. Giant-killing feats of performance and handling are really neither promised nor expected of this car - and there's something both liberating and wonderful about that. 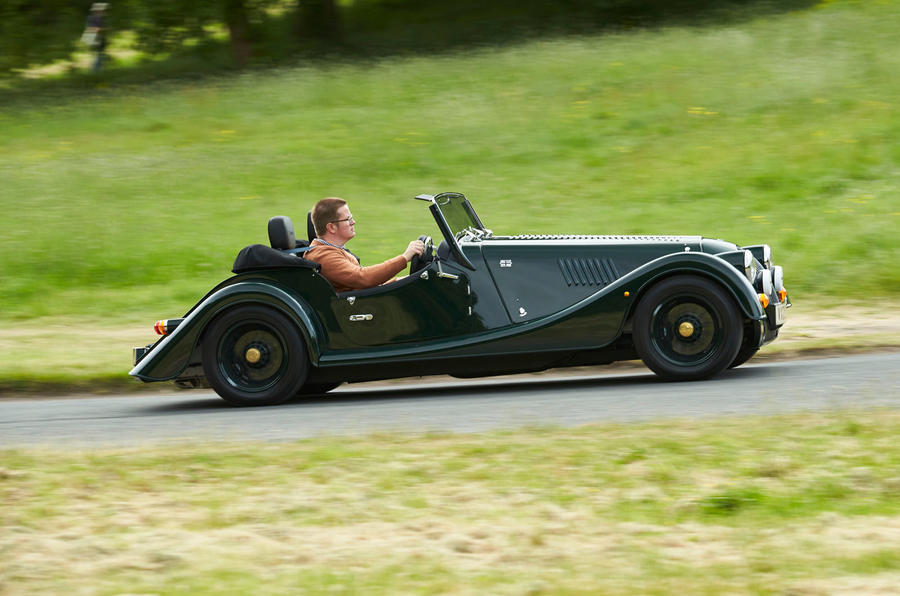 BMW wanted to give the 4 Series Convertible just as much dynamic polish as the coupé. It hasn’t. Steering and roof-down body shimmy flaws on their own might not be big problems, but together they add up to turn this into a slightly disappointing sports convertible in some ways, despite its stylish advantages.

Yet that style is why many will choose it, that and the fact it’s one of the few remaining convertibles with a folding metal roof. It nails the convertible part of its brief, then, offering a comfortable, restful roof-down experience. With wind-blocker in place and side windows up, few rivals can offer such a feel-good factor. 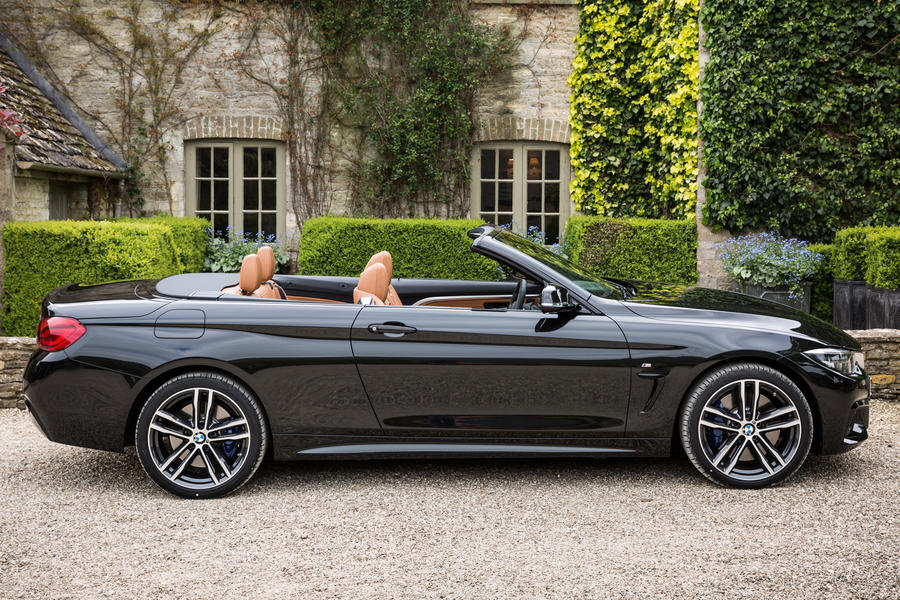 The Audi A5 Cabriolet is a car that’s never going to sizzle your senses, though it can still be enjoyable. It is the archetypal 'better to own than to drive' car. At speed, its acoustically lined hood is smashing at insulating you from the outside world, and with it down – a process that requires just one touch of a button and is achieved in merely 15.0sec – it’s bluster-free with the windows up, too.

Fun? Not much. Charming? Little more. Desirable? Absolutely. There isn’t much better for relaxing, care-free, open-top motoring without breaking the bank for it. 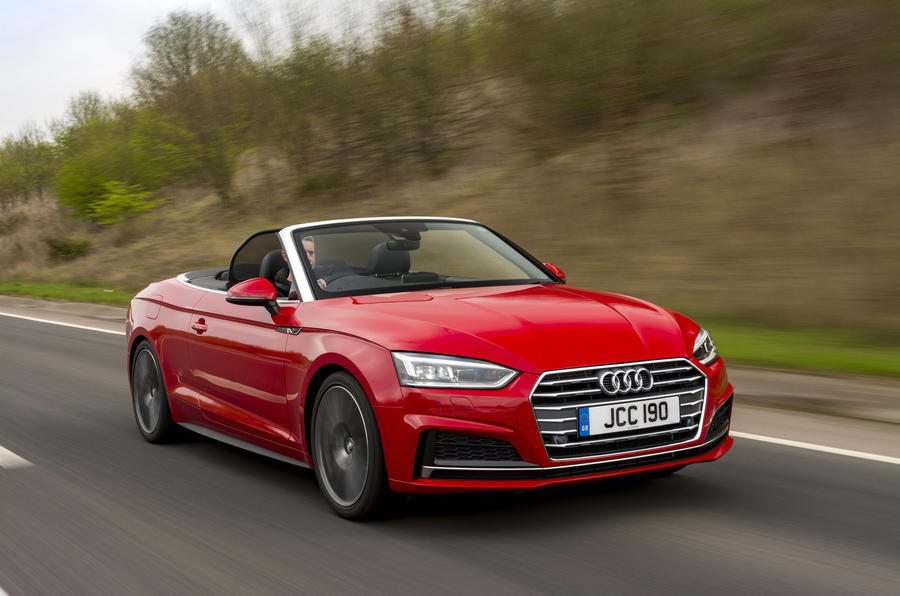 BMW's smallest cabriolet sits at a sweet nexus of price, usability, desirability and performance. It's an ageing car now, and you can tell as much from some the interior fittings. Nonetheless, it's still a compact car with reasonably usable back seats; with quietly creditable rear-wheel drive handling; and with an engine range mostly constituted of four-cylinder options but notably including the 335bhp turbo straight six of the M240i.

Although the car's not as tempting as it once was, you could still have fun in an open-top 2-Series and you could still get plenty of use out of one come rain or shine. The cheapest versions start at under £35,000 - and right now, as interesting in the car dwindles, could probably be had for a healthy discount if you could find an unwanted car somewhere in stock. 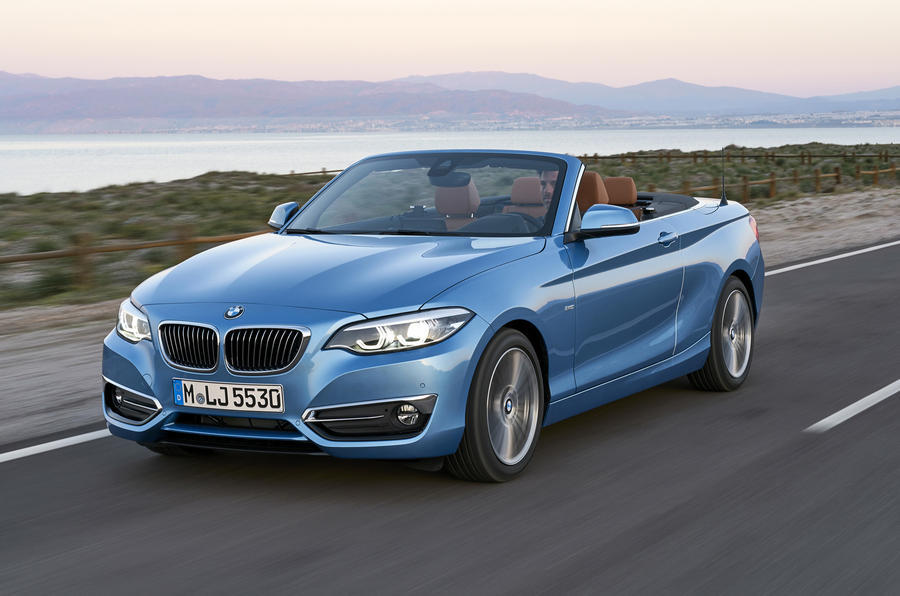 Mercedes' drop-top C-Class doesn't do as well as its bigger sibling the 'E' in this chart for a number of reasons. It's less usable, a little bit less cosseting, and doesn't come with as fullsome a range of engines. If you want to avoid either three- or four-cylinder power here, you have to go all the way to an AMG model to do it; and if your reasons for doing so are more about refinement than performance, you may be reluctant to spend the money. More to the point, Merc's four-pot petrol and diesels don't have the richness or character you might want in a desirable drop-top cruiser.

You can still accommodate adult passengers or taller kids in the back seats here, though, when you need to, although with the roof down available boot space drops to less than 300 litres - which, while it isn't untypical of cars of this kind, isn't great either. 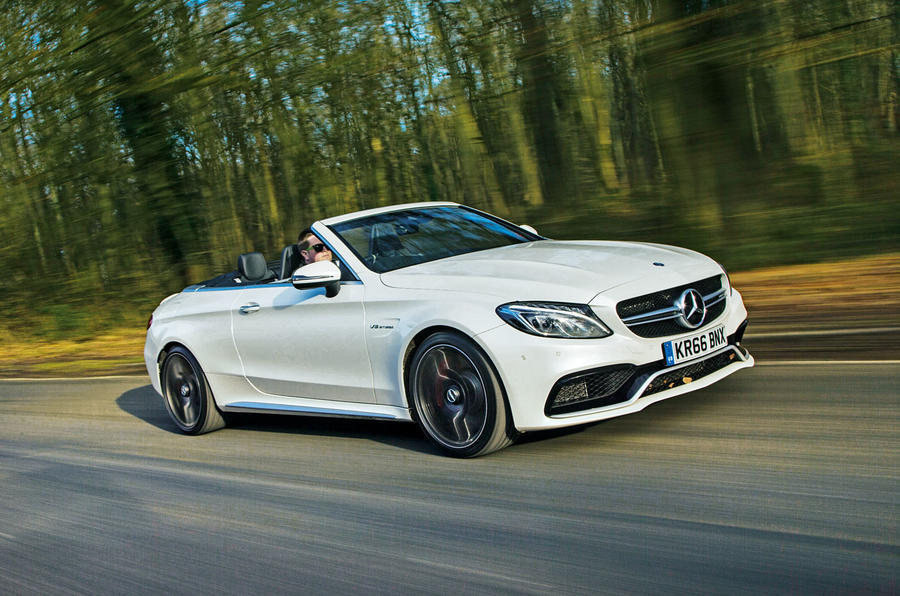 The A3 Cabriolet fills its brief pretty well. It's a stylish product, which is exceptionally well executed both inside and out.

The inevitable dynamic compromises made in the name of roofless motoring, allied to artificial steering free of much in the way of meaningful feedback, blunt the model's appeal to the enthusiast driver, but otherwise this compact convertible is a measured success.

If you aspire to a premium open-top driving experience, then Audi's latest drop-top should be on your shortlist. Just be aware that others do the same with added fun. 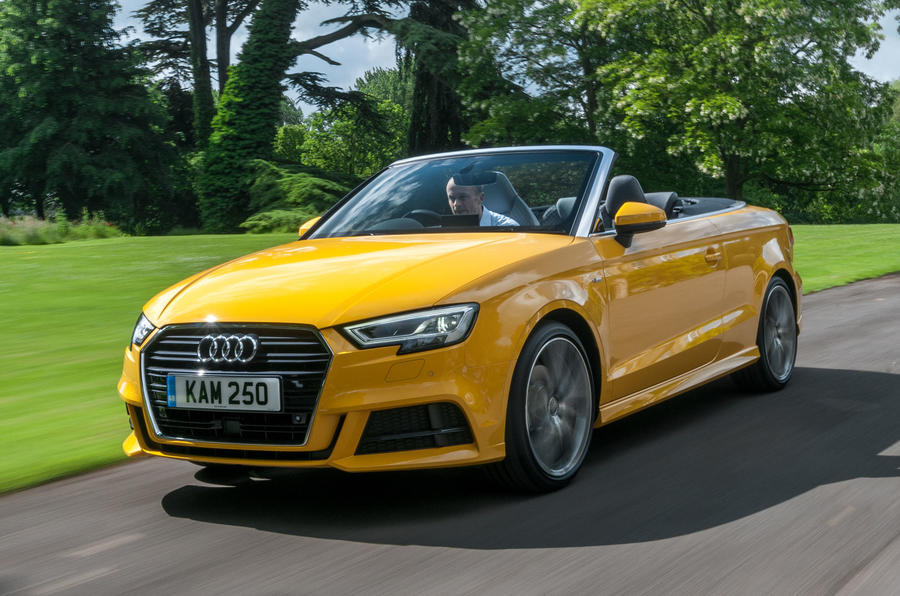 New name, same car. Pretty much, anyway. The SLK has morphed into the SLC, yet Mercedes has stopped short of transforming it into the kind of driver’s car you really think it should be on first acquaintance.

Among the positives is its overall refinement, which is excellent by roadster standards. Yet it comes across as being disappointingly aloof and lacking in critical dynamic ability. It’s fine when you’re cruising along but doesn’t respond well to being encouraged to higher speeds.

We can forgive others on this list as much, yet when versions of the SLC are priced beyond the Porsche 718 Boxster, it’s harder to this Benz. 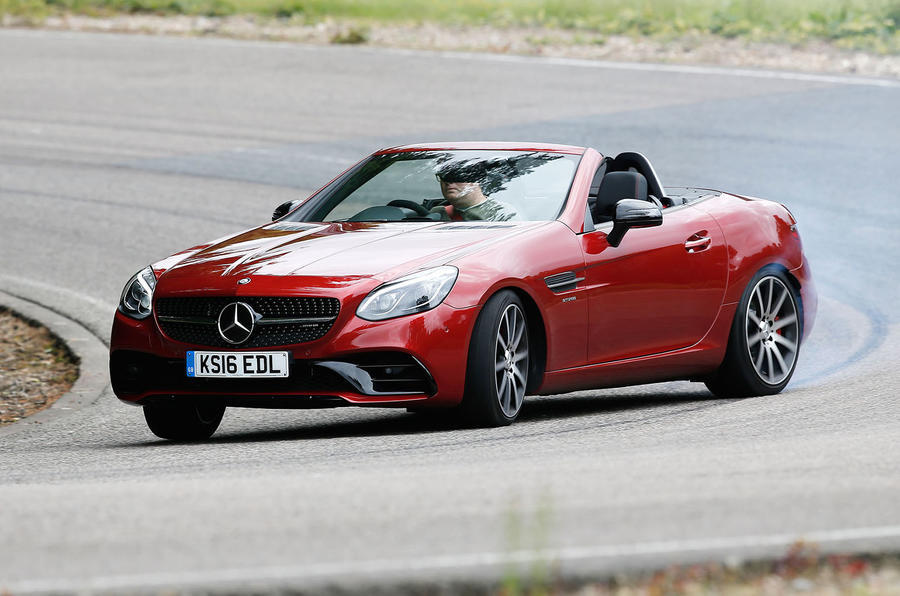