It has been a rough few years for McLaren Automotive. Some luxury and sports car brands have weathered the challenges of the past 24 months surprisingly matter of factly, relying on the desirability of their cars, the good faith of customers and no doubt having a few quid in the bank to get them through. But McLaren hasn’t had it so easy.

The McLaren Group sold a division of its business, not to mention its Woking headquarters (only to lease it back) in 2021. The automotive division parted company with a CEO last year. The Formula 1 team itself was even linked with a sale at one stage.

It’s great to see McLaren using electrification to address one of the longer-standing vulnerabilities of its car so effectively: lower-range turbo lag. Picking up in higher gears just isn’t a problem for the Artura.
Matt Saunders | Road test editor

And through it all, the company was having a particularly tough time getting its latest crucial new model, the Artura plug-in hybrid supercar, out of development and into showrooms. Even now, the struggle doesn’t seem to be entirely over. Technologically ambitious and almost entirely new from bumper to bumper, the Artura (whose model name is a portmanteau of ‘art’ and ‘future’) is a car of quite inspired design and packaging, and really expert tuning and execution.

It gives you faith not only in the capabilities of McLaren’s key designers and product planners, but also in the strategic wisdom of a company that knows its business, values its reputation and back catalogue, and wants to bring its existing customers with it into a world of electrified supercars, rather than simply replace them with a new band of clientele of new tastes and priorities.

Our render shows how the McLaren SUV might look

The Artura will be a fine car, I expect, once its maker has finally and fully answered the challenges associated with its armoury of new technology, among which number a completely new carbonfibre chassis tub; a new electrical architecture; an all-new V6 combustion engine and eight-speed transmission; a new generation of infotainment system; and all of its plug-in hybrid componentry. 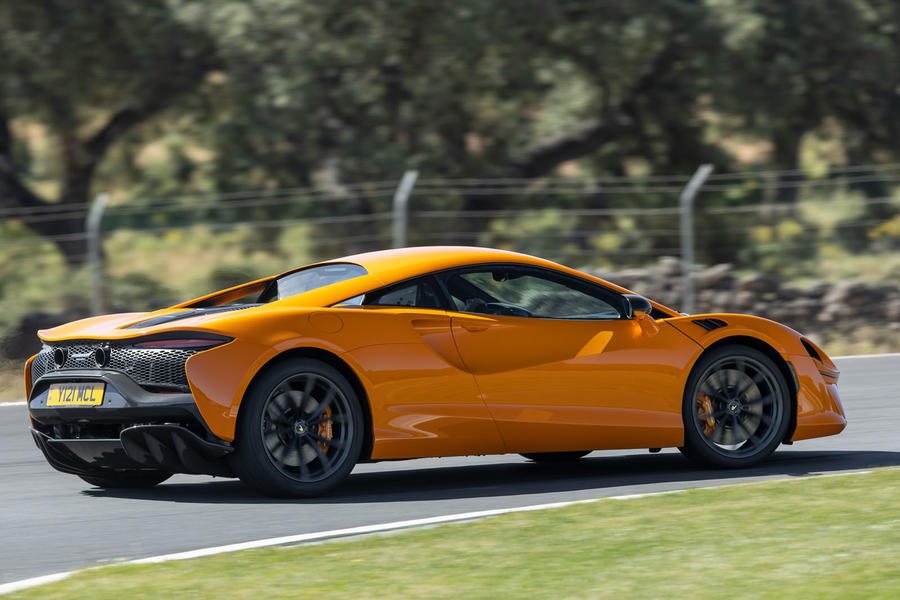 But the Artura’s time of readiness, I fear, may not be quite here yet. Because, despite having been bold enough to launch the car to the motoring press anyway in an event already postponed from last autumn, McLaren is evidently still wrestling with the technical complexity of this car, as events at the press launch only served to confirm. Those events, and why they happened, we'll come on to.

McLaren insiders describe this car as not so much a new chapter for their employer but a whole new book.

This is its first car to use a new carbonfibre chassis tub not only designed in-house but assembled that way too, at the new McLaren Composites Technology Centre in Sheffield. That tub adds stiffness to the Artura’s structure and saves weight, and it’s attached to aluminium suspension and powertrain subframes, and then circuitously to new axles (specifically a new multi-link rear axle coming in, where the old McLaren 570S used double wishbones at both ends).

Suspension is via coil springs and adaptive dampers, although not the interlinked kind that McLaren deploys elsewhere. Braking comes courtesy of carbon-ceramic discs and aluminium hubs as standard, and steering remains electrohydraulic, yet even that is a new, more efficient system.

The packaging of the Artura’s engine bay was laid bare in a full-scale technical cutaway drawing for guests to see at the car’s Spanish press launch. Immediately behind the rear bulkhead and mounted flat against the car’s floor is a 7.4kWh lithium ion battery about the thickness of a briefcase but made up of five battery modules that run the full width of the car. Above that sits a 66-litre fuel tank and then, immediately behind both, a brand-new 3.0-litre wide-angle V6 engine, whose design delivers almost perfectly against McLaren’s targets of light weight, efficient packaging and low centre of gravity (C of G).

“A flat six would have actually raised the car’s C of G,” explains head of powertrain Richard Jackson, “and, as a result of needing seven main bearings rather than four, would likely have been heavier.” As it is, the dry-sumped six-pot allows advantageous turbo placement and direct induction and exhaust routings, and it outputs through a driveline that actually runs backwards through the car at a lower level than the rear axle line at which it’s aimed. Looking at that as if through X-ray glasses, it’s amazing to see.

Power gets to that axle via an innovative axial-flux electric drive motor worth up to 95bhp and 166lb ft all on its own; then, an all-new eight-speed dual-clutch gearbox (another lighter, shorter component than what appeared on the 570S); and then, for the first time in any McLaren supercar, a mechanical active torque-vectoring differential.

Elsewhere on the Artura, a new ethernet-based electrical architecture saves more weight. Superformed aluminium body panels achieve the same end. The car hasn’t been permitted to grow significantly in any dimension compared with a 570S: it’s only a few millimetres longer than its predecessor and actually narrower across the body.

And so while that hybrid system adds some 130kg to the Artura’s all-up weight, more than half of that penalty has been offset. In running order, the Artura weighs 1498kg – only 46kg more than the non-hybridised car that it is replacing and around 100kg lighter like for like, by McLaren’s own estimations, than a Ferrari 296 GTB, which is about the only other brand-new plug-in hybrid supercar with which you can currently compare it.

The interior has a familiar feel, but brings plenty of ergonomic overhaul. You sit low and straight in the car, well supported in either the standard Comfort seat or the even cleverer and lighter optional Clubsport bucket, with plenty of head, elbow and knee room. Forward visibility is excellent, as it always is in a McLaren. There’s a lovely simple round steering wheel wholly unadulterated by switchgear, and a one-piece aluminium shift paddle that you can rock forwards or backwards with either hand. 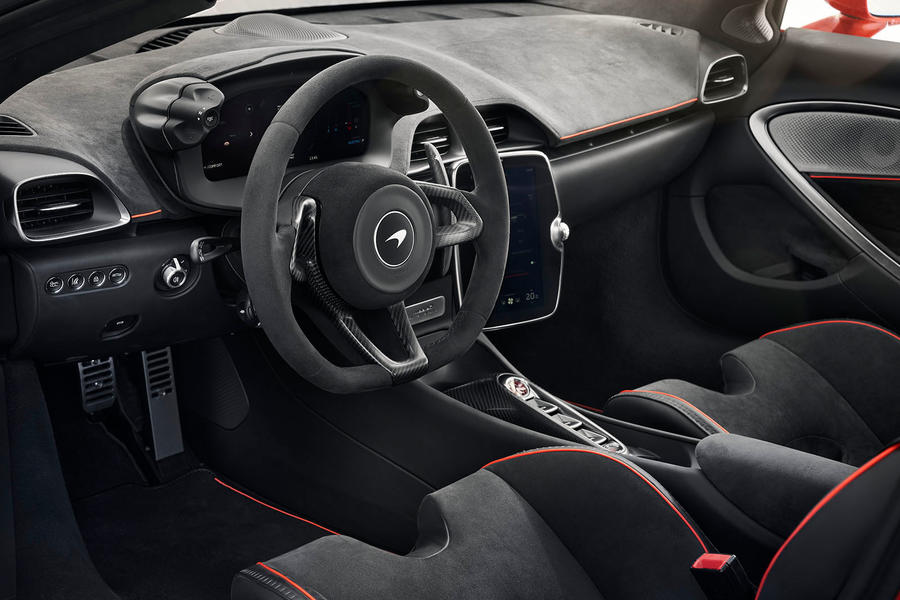 The instrument binnacle is mounted on the steering column rather than the fascia, so it moves with the wheel as you adjust it - and you always have a clear view of the digital dials and displays within it. Mounted on either side of that binnacle, meanwhile, are new powertrain and suspension rocker controls. Slide your right hand up to ‘10 to two’ on the steering rim, reach out a finger, and you can flick your way up from Electric powertrain mode, through Comfort and then beyond into Sport or Track. Your left hand controls the corresponding damping modes. All are now accessible without taking your hands off the wheel, or looking very far from the road.

The Artura is a very creditably refined tourer in Comfort mode, and even quieter in its Electric setting, when it’ll manage a claimed 19 miles before the battery runs out of charge. Performance is a bit limited when the combustion engine is shut down and the wider driving experience predictably dulled. But if you’re looking for a way to avoid waking your neighbours first thing in the morning, or for a relaxing last few miles of a really great cross-country drive, or just an emissions-free way to negotiate an urban area, it’ll work. Frankly, it doesn’t need to do much more.

Hit Sport powertrain mode and suddenly the Artura turns up the volume. That V6 engine starts and runs continuously, keeping the drive battery at a useful mid-level charge, topping it up by ‘dragging’ the engine (channelling extra combustive power into the battery via the electric motor acting as a generator) but never with regenerative braking (so the car’s pedal feel, like its steering, is always totally uncorrupted).

Working in tandem, the V6 and drive motor conjure perfect ‘torque-filled’ throttle response the likes of which very few previous McLaren models – and few other supercars like it, for that matter – have known. Honestly, it’s like atmospheric power delivery, only better. Outright accelerative pace wants for nothing because, well, 671bhp moving a tonne-and-a-half is plenty. At high range, the V6 keeps pulling up beyond 8000rpm when you need it to.

And it sounds… quite good, actually. Markedly less like the industrial threshing machine that McLaren’s V8s once brought to mind, and with about as much tunefulness as we can reasonably expect of a modern, particulate-filtered, turbocharged engine (although not the bombastic audible aura of some supercar alternatives).

The Artura is clearly a little more stiffly sprung than 570S owners may be expecting, but it still has a suppleness and fluency about it on the road. It doesn’t quite glide over most surfaces in Comfort mode but seldom fusses or fidgets.

The car’s dynamic high points, for this tester, are its relatively modest footprint, its superbly accurate and enticing steering, its super-flat, effortless body control, and its readiness to carry speed along a fairly narrow lane while so clearly telegraphing its size and grip level. The car feels light on its feet, agile and threadable, but ever intuitive to place.

Dynamically, it feels like an established supercar recipe refined and perfected, but not reinvented or revolutionised in any way, by electrification. At times, you can forget that the Artura is a hybrid entirely; it doesn’t feel heavy, muted or complicated to drive.

The e-diff adds some on-track, on-limit handling adjustability, but it doesn’t turn the Artura into some yaw-addled drift junkie. The car is much more interested in being driven quickly and engaging you as a driver at a simpler and more accessible level – and there’s nothing wrong with that.

So all that’s left to deliver is the ringing recommendation, surely? That'll have to wait. For now, we’re duty bound to report that, having impressed on the road, our Artura test car encountered some thermal powertrain management issues that brought a concerning end to our first track test session, and were the cause of plenty of smoke, and track marshalls hurriedly emptying their fire extinguishers into the car’s engine bay. McLaren explained that the car’s cooling system had been mistakenly fitted with the wrong oil cooler – an honest mistake, perhaps. But one other car on the launch suffered from its own thermal incident unrelated to ours, and others had ultimately less serious but still concerning software problems.

The experience left this tester convinced that the Artura will be a superb addition for McLaren, capable of converting people into electrified supercar ownership with a really light touch, and with a reassuring purity and familiarity about it – once it is finished. Once McLaren has completed its technical troubleshooting, made every system in the car work fully in tune with every other, proven every last corner of that powertrain, and ironed out every last software hiccup.

The company claims it has already done all of this, of course. That the cars we drove at and around the Ascari circuit were effectively late-model prototypes that hadn’t been subject to quite the same technical scrutiny as customer cars, didn’t have its very latest software releases and weren’t quite representative of the Artura as the people who really matter - its buyers - will receive it.

But for now, we can only report as we find. When we drive this car in final production form, and put it through a full UK road test, a proper verdict and star rating will follow. This tester would expect it to be a very positive one indeed, if all goes well. But until then, the Artura’s creators and its deposit holders alike clearly have a little more unexpected and unwelcome pause for thought. 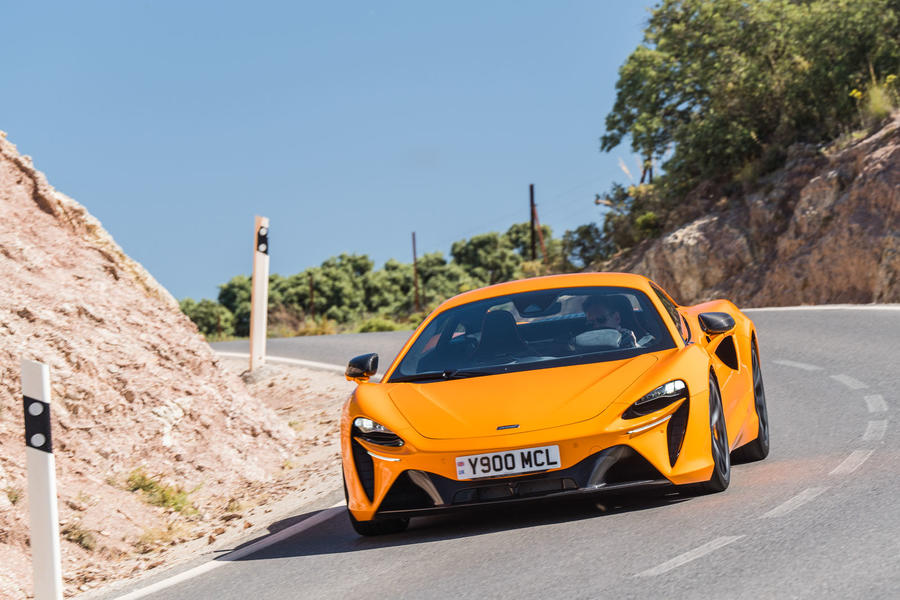