Can a motorbike putting its power through one tyre outsprint a sports car with four driven wheels? We describe the contest from the Audi’s driving seat
Close

Car versus bike. You’ll have read it before and you’ll read it again, but it’s worth reading this one too.

Think of it as a state of the nation address. An opinion poll. An update from an ongoing fixture. The latest score from a match that has been taking place for about 100 years and will carry on for another century or more.

Today’s premise is a pretty straightforward one. They’re two fast vehicles in a straight-line drag test. Supercar versus superbike, but the quickest ‘everyday’ vehicles from, if you squint a bit, the same manufacturer, Audi, which has a controlling stake in Ducati.

Audi, then, provides the ordinary supercar, the R8. It has four-wheel drive, a naturally aspirated V10 engine in its middle, a dual-clutch automatic gearbox and launch control, and it’s the normal R8, not the Plus version. Thus, it has 533bhp and 397lb ft and costs £126,200.

Ducati provides its ordinary superbike, which is not so ordinary any more, because in place of the famous V-twin engine, Ducati now gives its performance motorbike a V4. This is the 1103cc Panigale V4 but, as with the R8, it’s not quite the top-spec model, the S, but the ordinary, everyday, usable one. Well, as ordinary as 211bhp at the crank and 92lb ft are on a motorcycle that weighs just 175kg, anyway. It, too, has launch control, although it’s not as straightforward as the Audi’s. For all that, you’ll pay only £19,250.

We’ve come to Bruntingthorpe Proving Ground because it’s wide, but the brittle concrete surface is less than perfect in places and the start of the run is ever so slightly uphill, although it’s fairly sheltered from the wind. We’ve recorded some pretty quick times here over the years in cars and on bikes that have taken some deft foot and handwork to get off the line well. 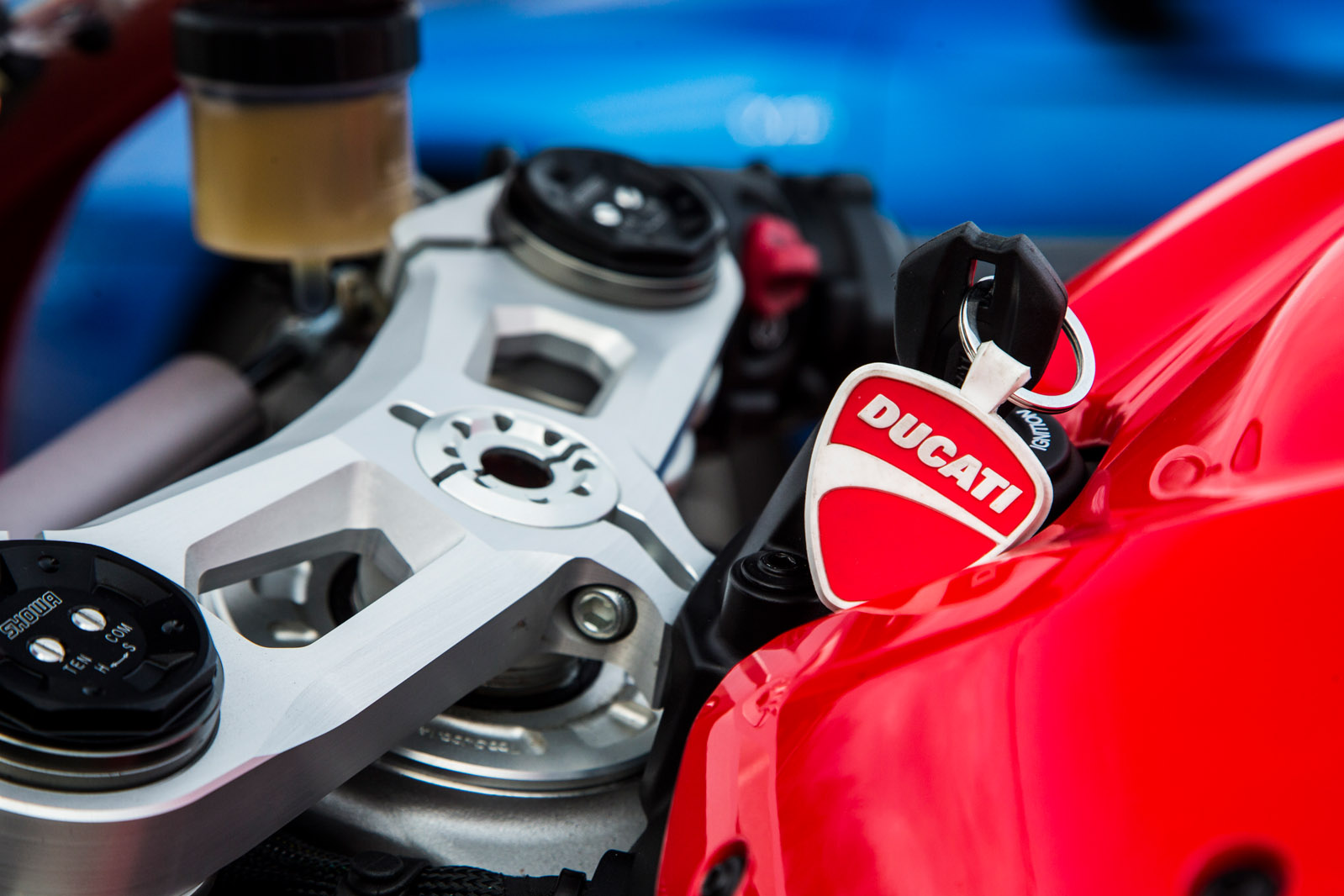 Today, only one of us has that issue, and it won’t be me. I’ll be driving the car, which has a launch control system that requires absolutely no skill whatsoever. You engage forwards, put the traction control into the right mode, tread firmly on the brake and then push quickly on the throttle. If the launch control system is on board with you, it’ll automatically hold the revs at 3500rpm, until all you have to do is sidestep the brake pedal.

Our rider doesn’t have it quite so easy. He’s Neil Winn, from our sister magazine What Car?, but when he’s not measuring boot capacities he’s riding a bike or racing a car, so he knows what he’s about.

His job is much harder, because although the Ducati he’s riding does have launch control, it’s not quite as easy to engage and a damned sight harder to use. The Panigale V4 has a conventional clutch, and if Neil flicks his fingers off of that lever like he would to shoo a fly, the bike will rotate around its back wheel and dump him firmly on his arse. 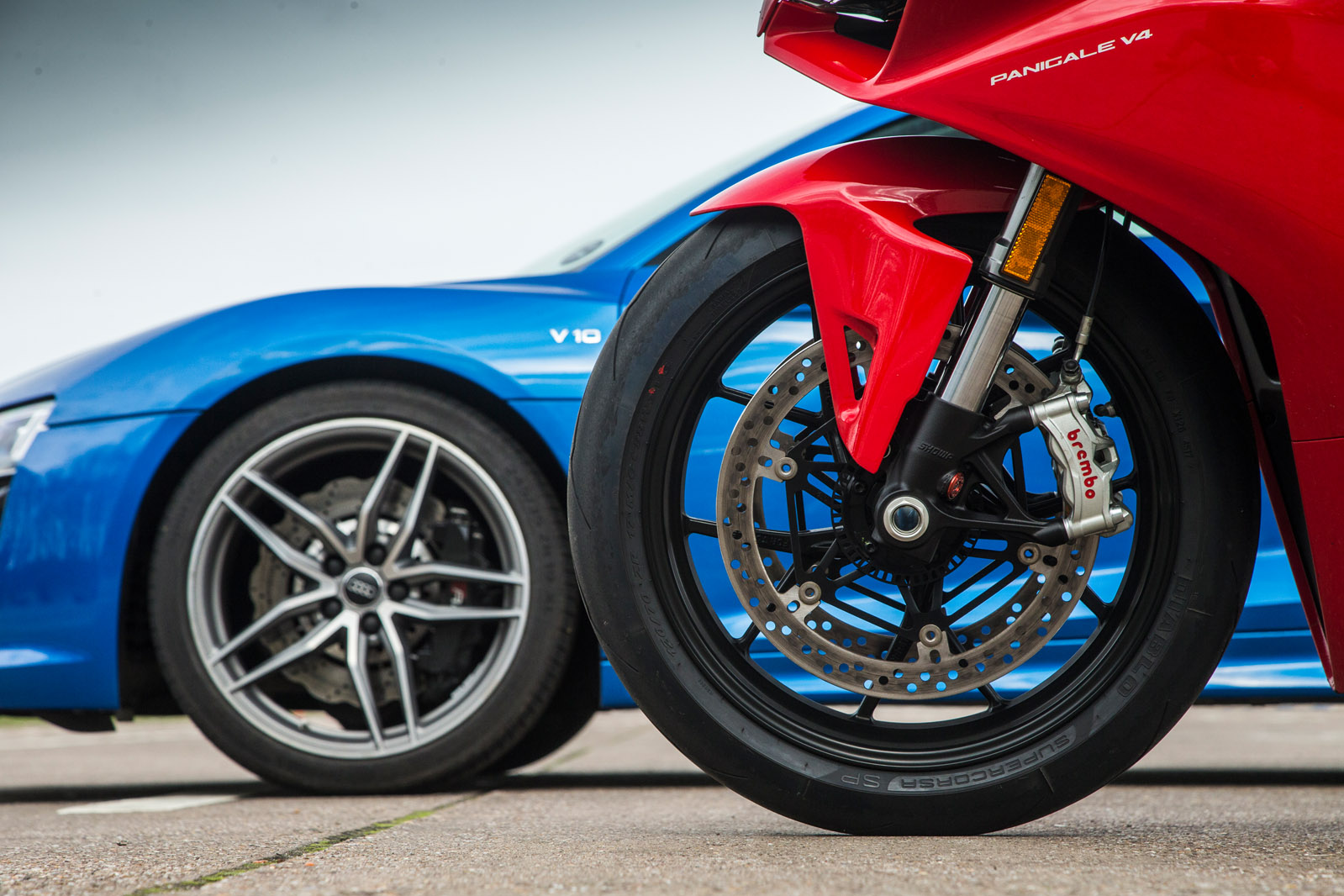 There’s wheelie control and three different stages of launch control, depending on whether you’re an amateur, semi-pro or expert (Neil goes for the latter), plus there’s a flat-shift feature that means he doesn’t have to roll off the throttle or pull the clutch in as he works through the gears. Either way, until the Panigale is hooked up properly, deftness of hand stands between him and a demolition of the R8.

And let’s be clear: ultimately, that’s what this is. We put our VBox data-logging system to use on both vehicles, and I’ll give you the numbers in a minute, but visually, from on board the car, there are a few distinct phases after our flag marshal drops his hand.

Firstly, Neil’s fingers work more quickly than the R8’s launch control, so for a split second the bike starts to edge as the Ducati’s clutch is feathered and the R8 figures out you want to leave the line. 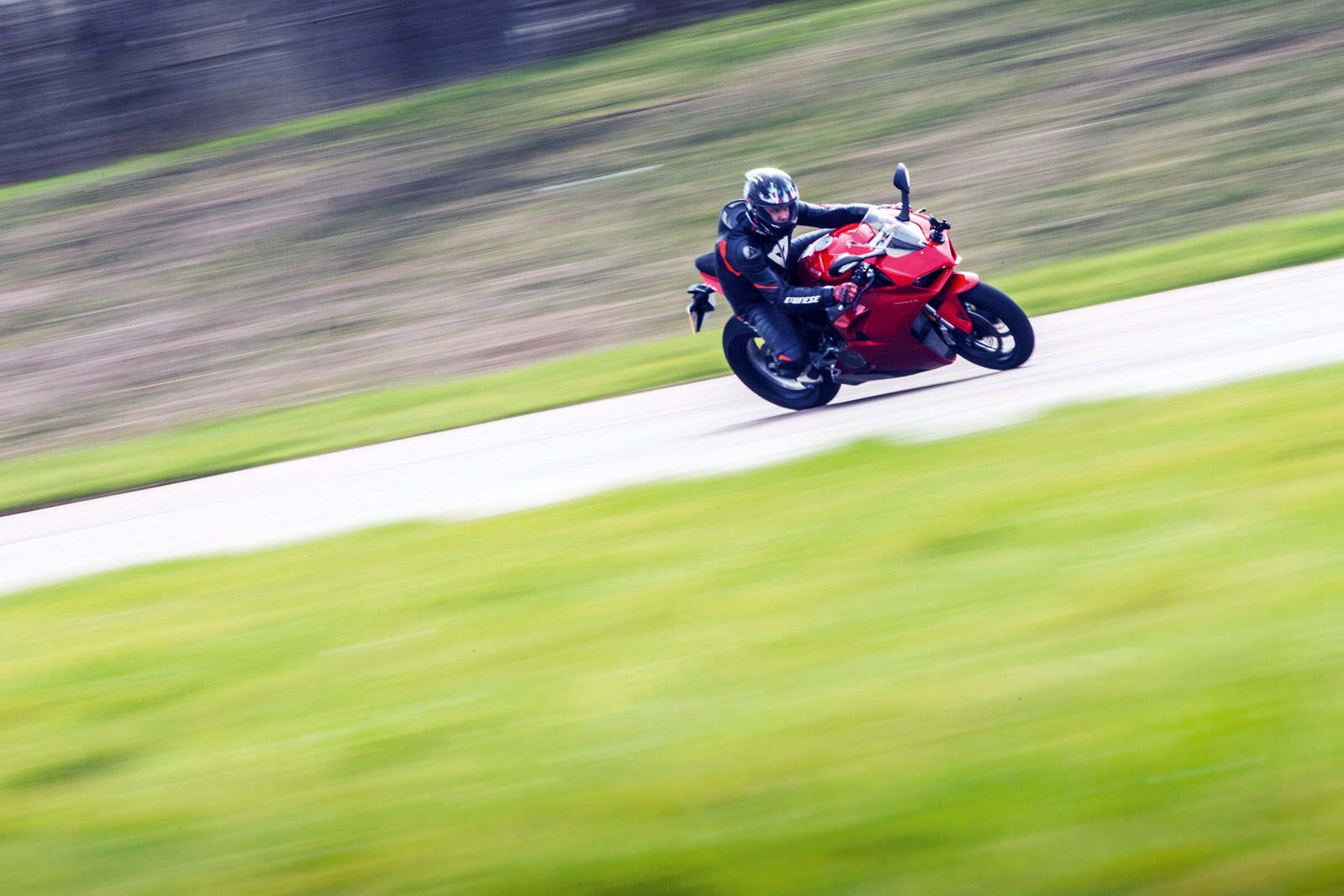 Then the R8 claws a bit of time back, as the four-wheel drive system puts the power to the road. Perhaps it edges ahead, if it doesn’t have to feather its own throttle output, which it sometimes does if it gets on a patch of iffy concrete.

Out of the corner of your eye, you can sense the bike having its own issues deploying all of its power, but mostly that seems to involve not lifting its front wheel too far off the ground. Neil’s body position is important. He’s lying as flat as he can on the tank, right foot still trailing, left foot on its peg ready to kick an upshift. In the car, you could be listening to Radio 4.

But after the initial getaway, it’s all motorbike. It’s ahead at 60mph (3.28sec versus 3.43sec), stays ahead at 100mph (6.30sec versus 7.72sec), and then, just for a moment, at around that speed, the Audi is clearly in a good gear and the bike is still having issues keeping its front wheel down. For a moment or two, you think you might – perhaps in the middle of The World At One – very, very gradually reel the bike back in, or at least keep pace with it. 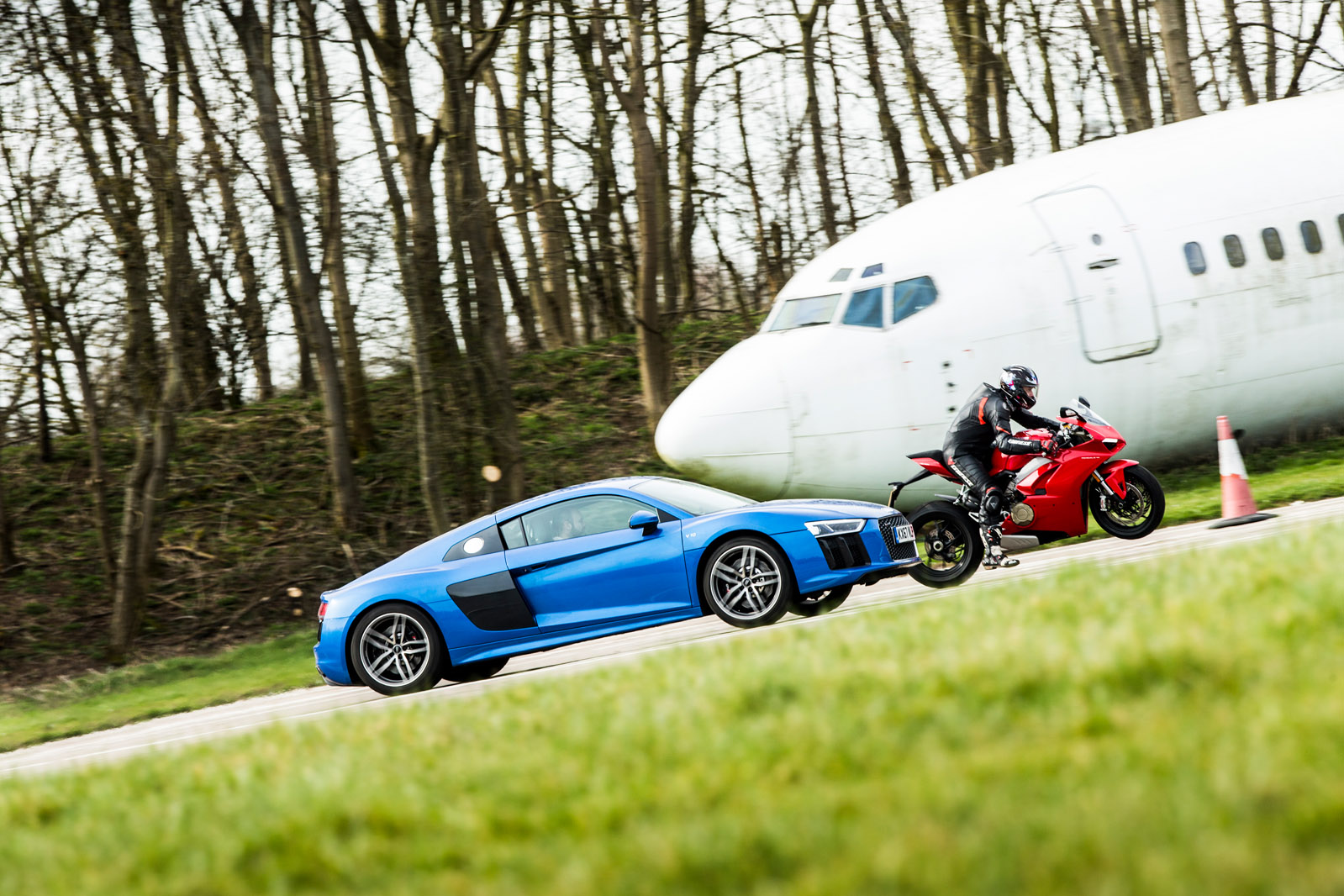 You’re not. Eventually, although he needs more than 100mph on the clock, Winn knows the bike’s front wheel is going to stay level and can kick through all the gears with abandon. Through a quarter mile (10.84sec at 142.05mph versus the R8’s 11.55sec at 126.6mph), through a half mile (16.46sec at 164.2mph versus 18.30sec at 150.42mph), and through the 186mph (300km/h) barrier, which bike manufacturers have a gentlemen’s agreement not to exceed. At least, they don’t advertise it if they do. At 186mph, some bikes’ speedos remain static. The Panigale V4’s just goes blank. And the bike keeps on accelerating.

Current score, then: it’s early in the second half, Chappers, and two wheels are still comfortably in control of this game.

How to get the bike off the line:

The Ducati Panigale’s launch control is complicated to engage. At traffic lights, by the time you’ve engaged it, you’ve probably watched someone else ride off.

First you press and hold a button that activates the Ducati Power Launch (DPL) mode. Then you set the DPL level: 1 is for experts, so the bike will wheelie a lot; 2 is for semi-experts but reduces the wheelies a bit and 3 will barely let the front wheel rise at all, so you won’t crash but you’ll be going more slowly. 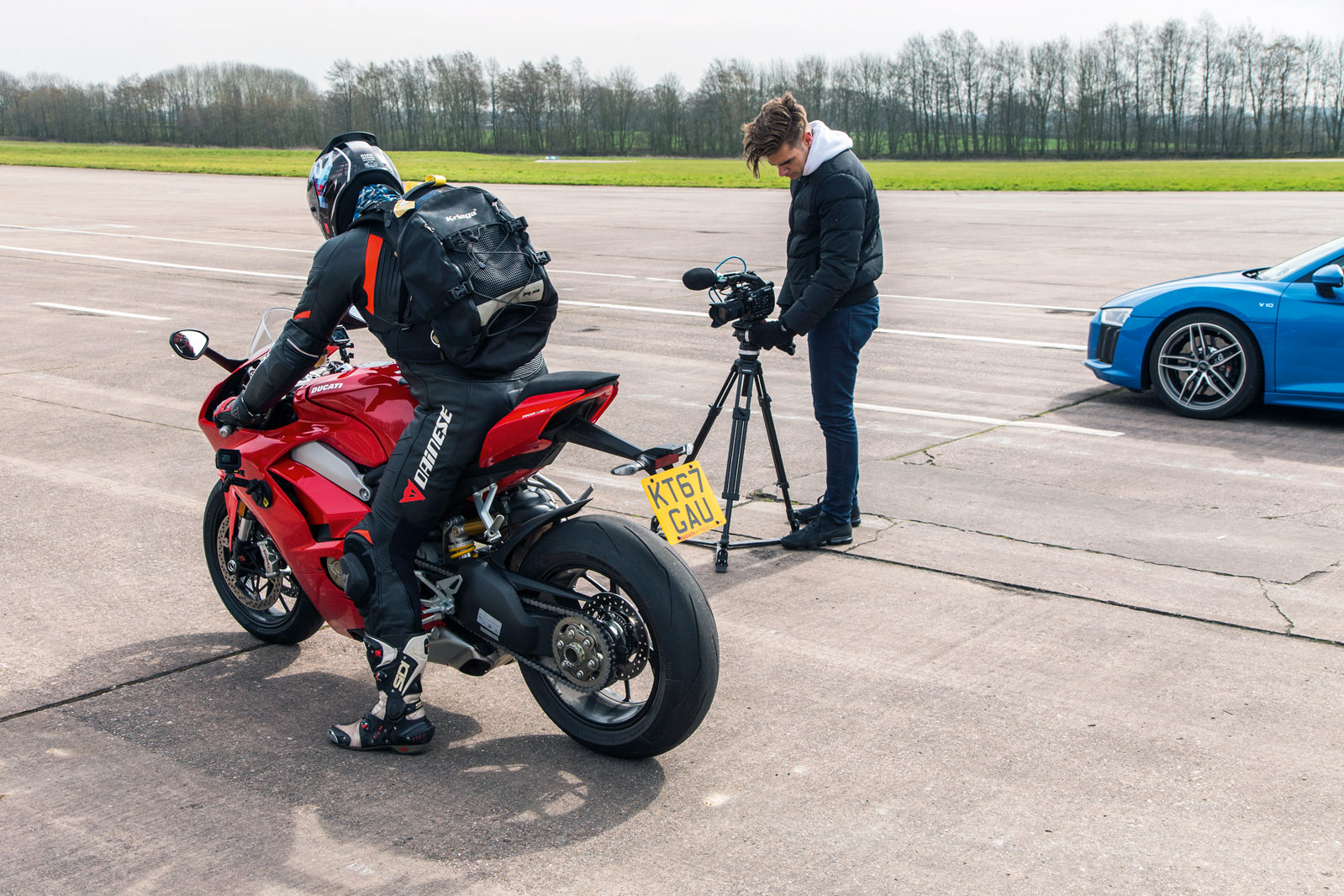 Once in a mode, the bike tells you to select first gear. Do that and then ping the throttle open and it’ll hold at either 6000, 8000 or 10,000rpm, depending on which model you’re riding.

You have to let the clutch out gently, which isn’t easy, but once it’s out you can, pretty much, almost hold the throttle wide open and let the bike do its thing.

This article was first published on 24 May 2018. We're revisiting some of Autocar's most popular features to provide entertaining content during these difficult times.

Not comparing like with like - a bike at 100mph (or whatever speed) feels very different from 100mph in a car.

16 June 2018
I love fast estate cars. But a 2 seater sports car full of safety features is pointless on the road and boring on a track! I'll stick to my bike. I've yet to get in a car that leans.....

Peter Hickman just recoreded a 134.45 mph lap of the Isle of Man on a BMW S1000RR superstock, a bike straight out of the dealers showroom. About 16 Grands worth. People have spent 600 Grand on cars that cannot lap within 20mph of that. I love my cars but nothing beats the thrill of a superbike and ever will.

Bikes, only true heros can race them quick

I've been riding and off roading bikess for 30+ years, I couldn't get within 20 % of the top TT riders times but I reckon I could get within 10% of top sports car drivers (F1 a different league) times.

who takes this seriosly, this is just for lols.

.. the numbers don't lie and the bike will always win .. IF you can keep it pointing in the right direction - and that's where the skill lies. Possiby one of these new-fangled electric hypercars may wrest the acceleration crown from the quickest bikes, but in a way, that will almost feel like cheating.