BACK TO ALL NEWS
Currently reading: How to wrap a car: the art of transforming cars with wrapping
UP NEXT
Gordon Murray T50 is V12-powered McLaren F1 successor

How to wrap a car: the art of transforming cars with wrapping

If you can’t wrap gifts without leaving gaps or uneven corners, spare a thought for the team charged with applying the perfect finish to top-end cars
Share
Open gallery
Close
Share story

Thirty years ago, if you wanted your Ford Sierra or Vauxhall Cavalier to stand out, you reached for a roll of pinstripe.

Body panels weren’t that curvy, so it was easy to apply. I remember, as a car salesman in 1988, applying parallel lines of gold tape to a brand-new Fiat Tipo 1.4 in Kermit green. It looked a proper eyeful.

Around the same time, 100 miles away in south London, a chap called Sean Davis was touring car dealers and pinstriping cars from the back of his van. One Ford dealer wanted him to stripe 100 Fiestas he’d called ‘Hip, Hop, Pop’ specials.

Davis must have been pretty good because, three decades later, he’s still sticking stuff to cars – only the rolls of pinstripe have given way to huge sheets of coloured vinyl and the motors are a tad more expensive. When I visit him at his business, Creative FX, based in the old Lola works in Bromley, his team is putting the finishing touches to a new Audi S5 they’ve wrapped in Nardo Grey. To my eyes, it’s a fairly dreary shade; but, to the car’s owner, it’s worth every penny of the £2600 it has cost him. 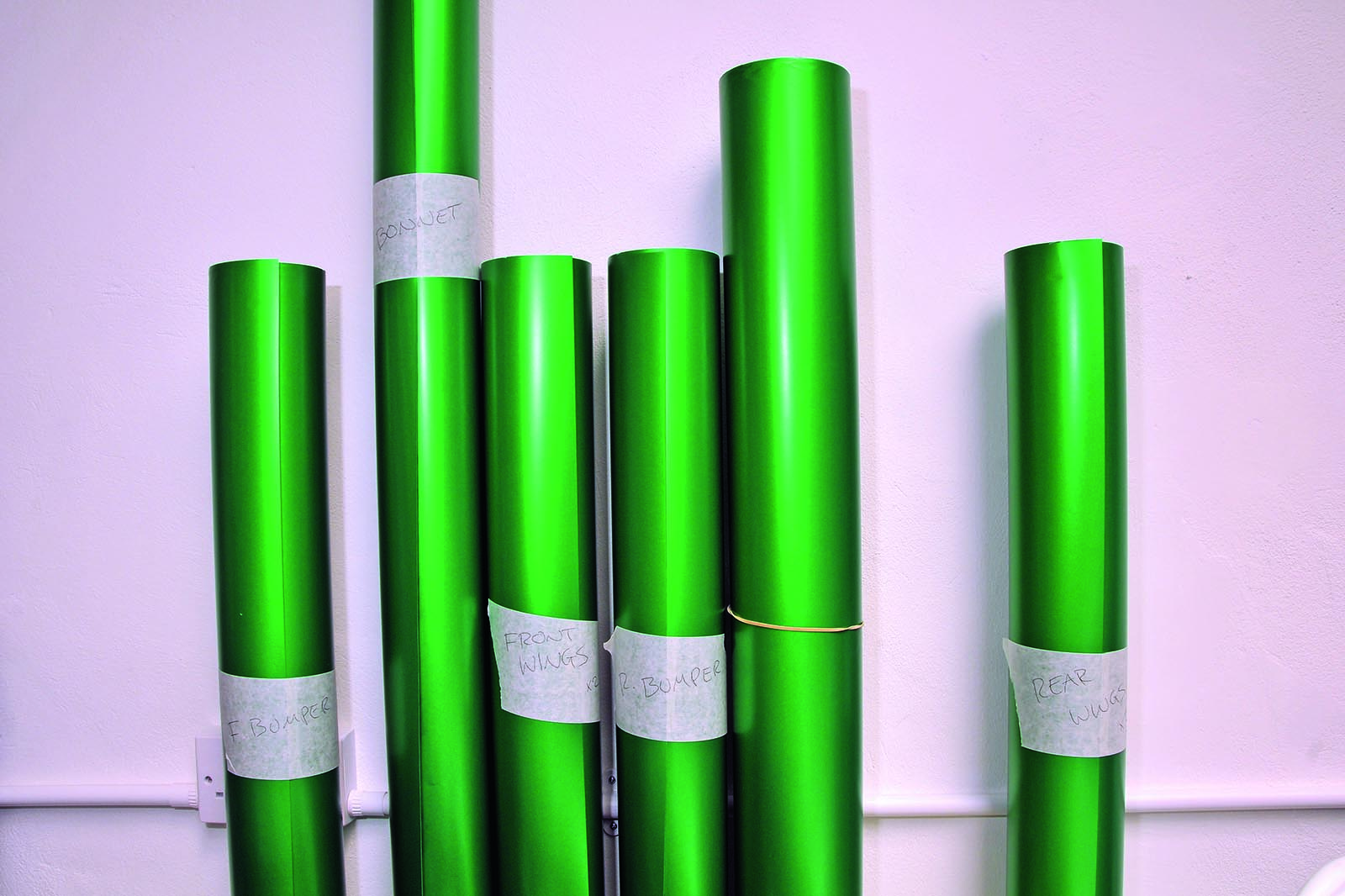 “He loves Nardo Grey but it’s only available on the RS 5, so he had to have it as a wrap,” explains Davis.

Audi’s official optional colours and finishes for the S5 cost £645, so you could argue the wrap has cost £2000. The work is guaranteed for five years.

Personally, I’d have spent the money on the S5’s optional Light and Vision pack (£750), and Comfort and Sound pack (£1295). But that’s to miss the point of wrapping, which is to get noticed.

It’s so popular in the UK that, a couple of years ago, the DVLA ruled that owners must notify it when wrapping the entire vehicle. 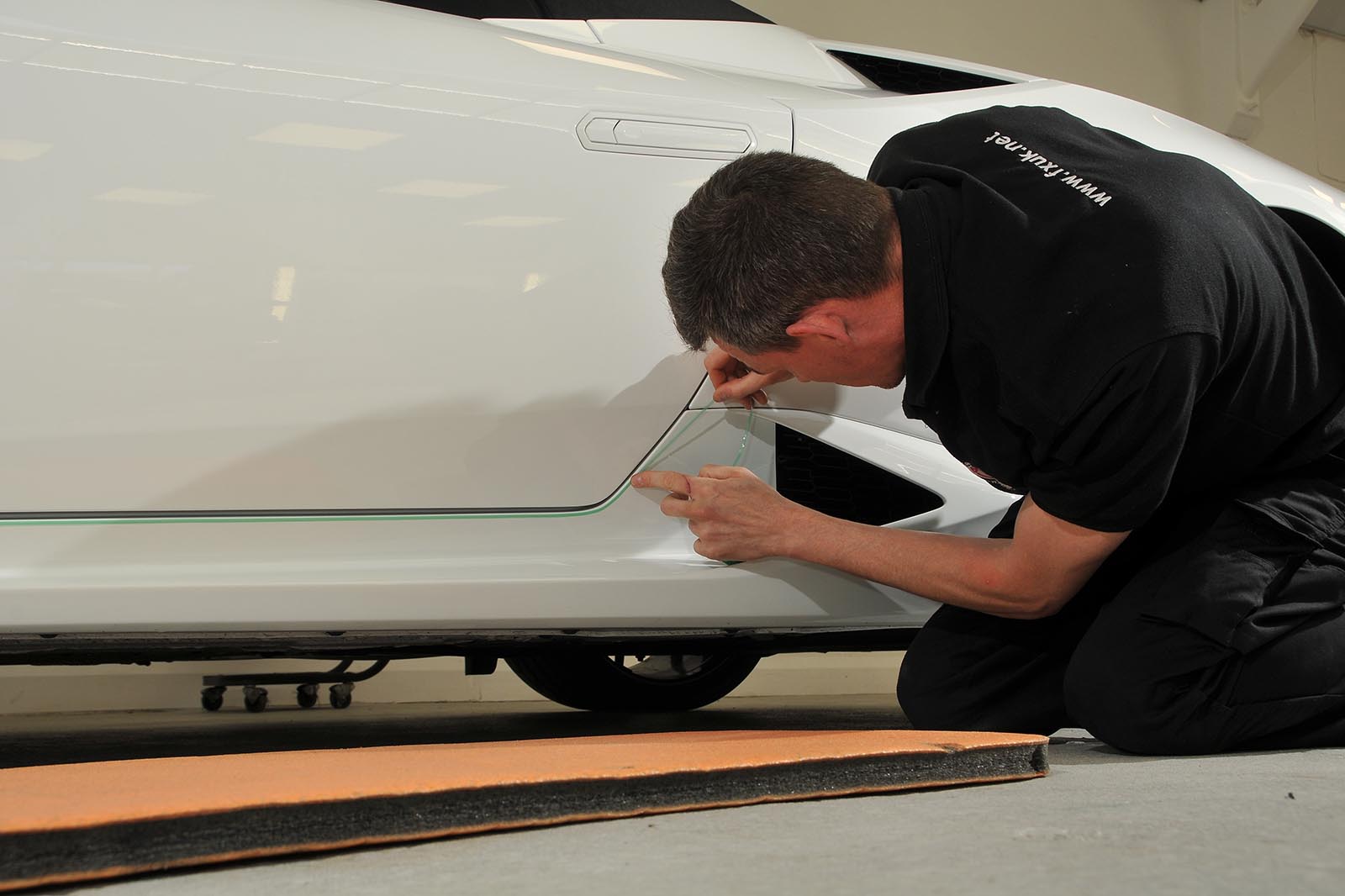 Each year, the world’s best wrappers compete in the Fespa World Wrap Masters Series. Jonas Sjöström scooped this year’s title and a cheque for £2500. Part of his challenge was to wrap both a Formula 4 racing car and one side of a speedboat in 60 minutes.

Davis’s installers take a bit longer: depending on the job, about three days to do one car. Working alone or together, they will wrap six this week. Last week, they worked Monday to Sunday, 8am till 8pm. Alongside the S5 is a Mazda MX-5 RF undergoing a vivid green, satin wrap. It is called Sheer Luck Green and, like Nardo Grey, is very popular. It’s being applied by installations assistant Stuart Roberts, under the watchful gaze of his manager, Tony Cook.

I’m amazed that to wrap the MX-5, Roberts has removed the door handles, wing mirrors and front and rear bumpers – but, says Tony, it’s the only way to guarantee proper coverage and a perfect fit. It also means the wrap can be cut discreetly between the panel gaps and on the soft panel seams hidden from view, rather than on the bodywork. 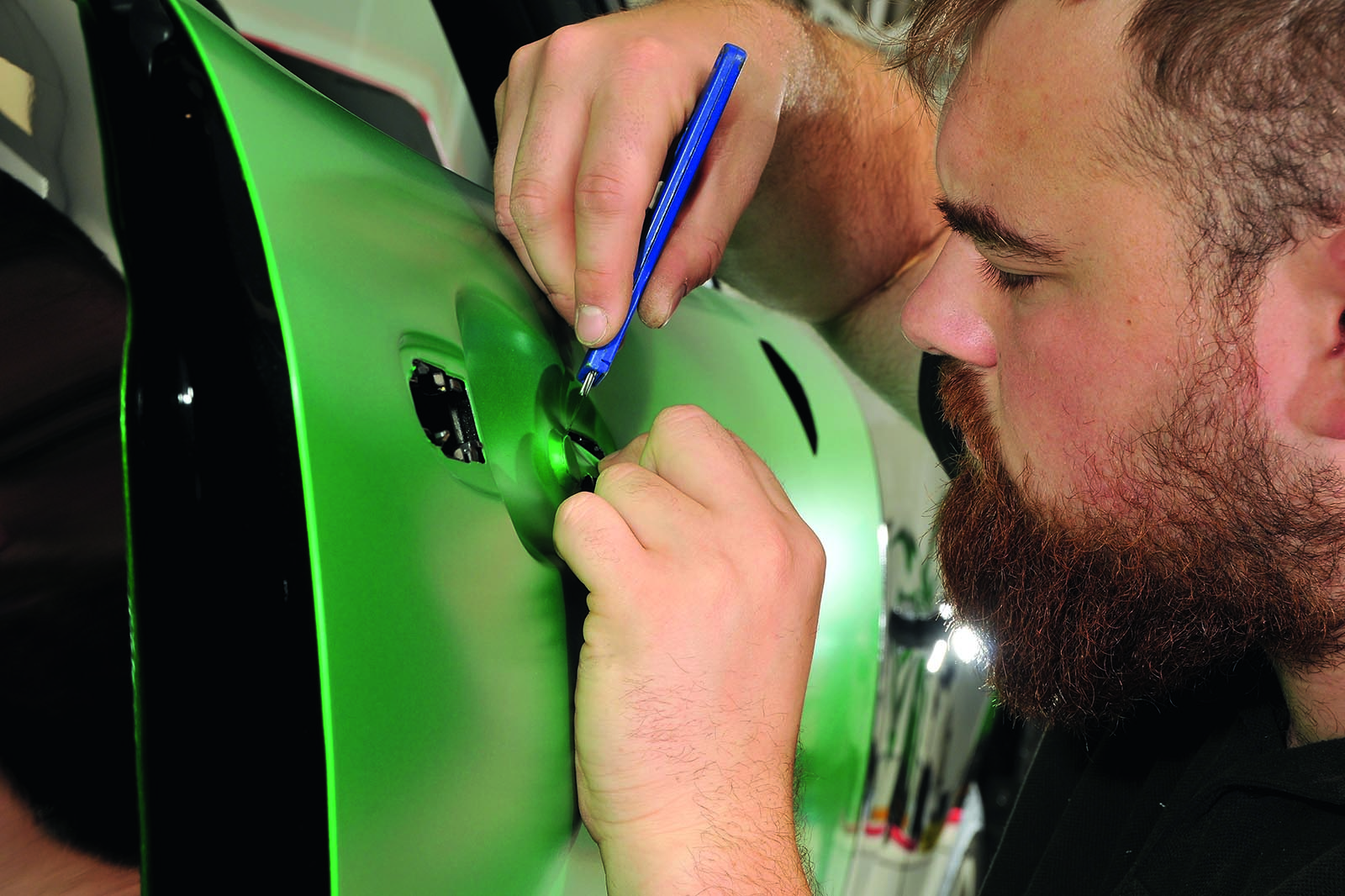 Where cutting like this is not possible, they use knifeless cutting tape, as Cook demonstrates on a Huracán he has been partially wrapping. He has wrapped part way up the door to where the angle changes. Cutting here will mark the paint but there’s a thread extending from the wrap. Cook pulls it and, like a cheese cutter, it slices cleanly through the vinyl for a perfect finish.

MX-5, S5, Huracán – you’d be forgiven for thinking vinyl wrapping was invented for the amusement of attention seekers. In fact, it started in Germany in the early 1990s as a way of satisfying an old law that demanded all taxis be beige coloured. Before vinyl came along, the taxis were sprayed beige, only to be resprayed a more attractive colour when it was time to sell them on.

The arrival of wrapping avoided all that hassle because now you could order the taxi in an appealing colour from the factory and then give it a beige wrap. At the end of the car’s working life, you simply peeled it off. 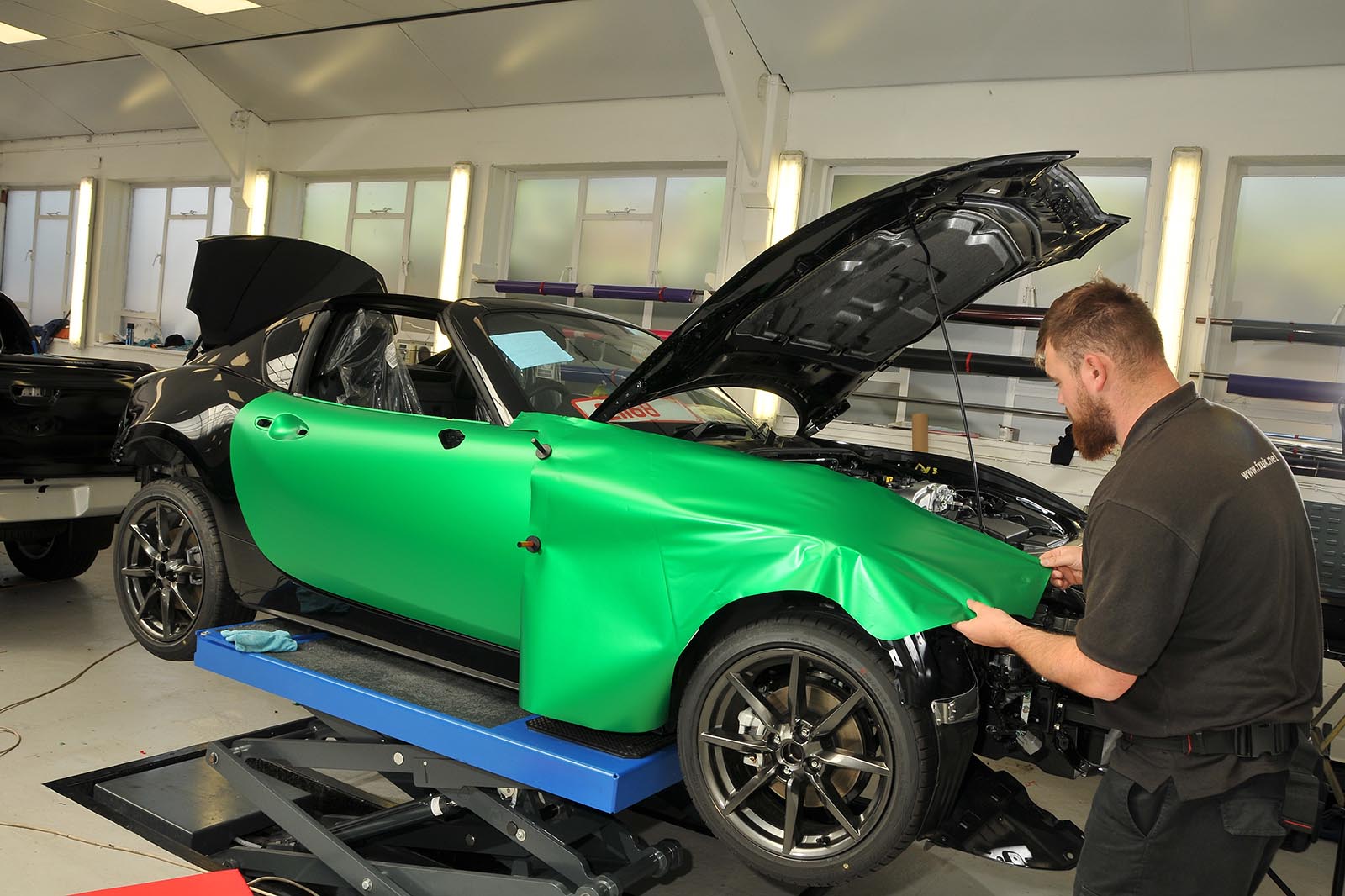 If a Stuttgart taxi driver can do it... I interrupt Roberts to ask him if I can wrap the MX-5’s rear wing. He hands me a roll of vinyl, a squeegee and a bottle of surface cleaner. Summoning up my best pinstriping skills, I deftly work the vinyl onto the car’s surface, stroking away air bubbles with the squeegee. Things are going well until I notice a crease developing that, if corrected, will leave me short at the wheel arch. Is that my phone ringing?

Roberts says he enjoys the sense of satisfaction when a difficult wrap comes good. You’ve got to be supple, though. Over by the Huracán, Cook has been lying flat on the floor for 15 minutes, patiently wrapping the inside of one of its rear air ducts.

Its owner will never know how skilfully his Lambo has been wrapped. On the other hand, unless Roberts can cover my tracks, the owner of the MX-5 will be coming after me with something considerably harder than a roll of vinyl.

Wrapping a car is a job best left to professionals who have had years of training. Lots can go wrong. If the car has been resprayed or has rust patches, there’s a danger that, when the vinyl is removed, it may take the lacquer and paint with it. If you overheat the vinyl when laying it, you could burn the paintwork, causing it to lift. Clumsy with a knife? You might slash your fingers to ribbons with the cutting blade. Still, if you have an old banger to practise on...

Make sure the room is between 18-24deg C, well lit and clean. Wipe down the panel with an alcohol-based cleaner that will ensure the vinyl sticks. Take your pre-cut wrap – ideally a top-quality, non-porous cast vinyl – and lay it on the panel.

Bit by bit, smooth down the vinyl using a squeegee. To encourage the vinyl to stretch and sit tight on any contours, warm it briefly with a heat gun. Remove any excess with a blade. You’re looking to score, not cut, using the weight of the blade. Cut inside panel gaps and on seams rather than on the edge of gaps or on the surface of the panel itself.

Do you have to inform the

Do you have to inform the DVLA that the 'colour' of the car has changed ???

Yes, since 2014 apparently. Prior to that, a wrap was considered a temporary change and not notifiable but it is now. Obviously the bizzies complained they were having trouble identifying cars on false plates and a different colour to the wrap!