From £20,2608
The distinctive 'retractable fastback' roadster promises typical MX-5 dynamics coupled with better refinement. It achieves the former, but the latter isn't quite there yet
Open gallery
Close

If we were to play a little word association and say 'Mazda Mazda MX-5', what would be your response? Perhaps words like 'sunshine', 'sports car' and 'soft-top'? Yet did you know that last one is a misnomer? You see, of the previous-generation MX-5, only 20% were soft-tops, while the other 80% were bought as the folding hard-top.

Still, they did look all but indistinguishable with their roofs down, so as oversights go, it's a forgiveable one. But not any more. The new MX-5 RF (for Retractable Fastback) looks completely different from the standard car, not least with its flying buttresses reminiscent of a Ferrari 599. Does it look good? Hmm, opinion seems fairly evenly split, but it is certainly distinctive.

It's a mite pricey, too. Mazda will charge you a hefty £2000 premium for the RF, so what is it you are getting, exactly?

A three-part roof, with sections consisting of steel, aluminium and plastic, folds away at the touch of a button in a mere 13 seconds, taking the glass rear window with it but leaving the fastback-style rear section in place for a Porsche 911 Targa-like look. But it adds more weight, higher up in the body. A 2.0-litre RF weighs 45kg more than the soft-top, so Mazda’s engineers have beefed up the front anti-roll bar and tweaked the damper settings. The idea wasn’t to alter the dynamics over the regular roadster, but simply to counter the extra mass and make the RF drive as similarly to its sibling as possible.

The suspension tweaks weren't only because of the extra weight, either; Mazda also noticed that chassis stiffness had increased after adding the roof. Normally that would be welcome, but it changed the handling balance dramatically, so they ended up doing the incongruous: weakening an underbody cross member to reduce its stiffness, thus restoring the balance. 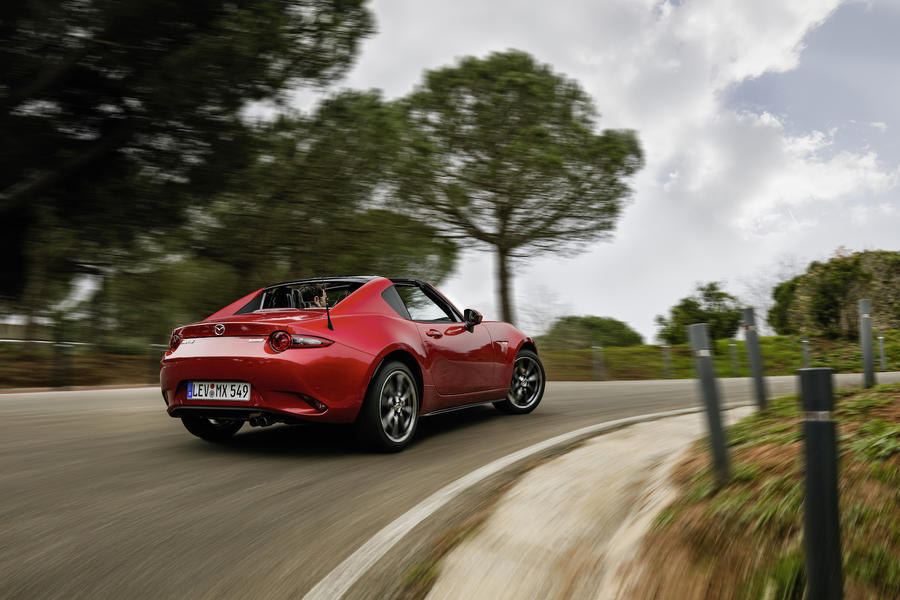 One design directive for the RF was greater refinement, without sacrificing practicality. To achieve this, there's a three-layer headlining, thicker floor mats and extra sound deadening stuffed anywhere that was found to be leeching noise, vibration and harshness into the cabin: notably the gearlever surround, rear wheel arches, doors and engine compartment.

Yet with its fancy roof installation up or down, it'll swallow two travel suitcases just like the soft-top.

The RF feels like an Mazda MX-5: small, nimble and nippy. The acceleration is slowed, but only by a tenth of a second, so you’d be hard pressed to tell that the plucky, naturally aspirated 2.0-litre engine is finding things more of a struggle. It still pulls well once you get it stoked and sounds just as tangy when you explore its upper reaches.

You can order the RF – but not the soft-top – with a six-speed automatic gearbox, yet to stick a self-shifter in a small sports car would seem a grotesque act. Far better to stick with the six-speed manual and its bolt-action shift, which delivers joy with every gearchange. 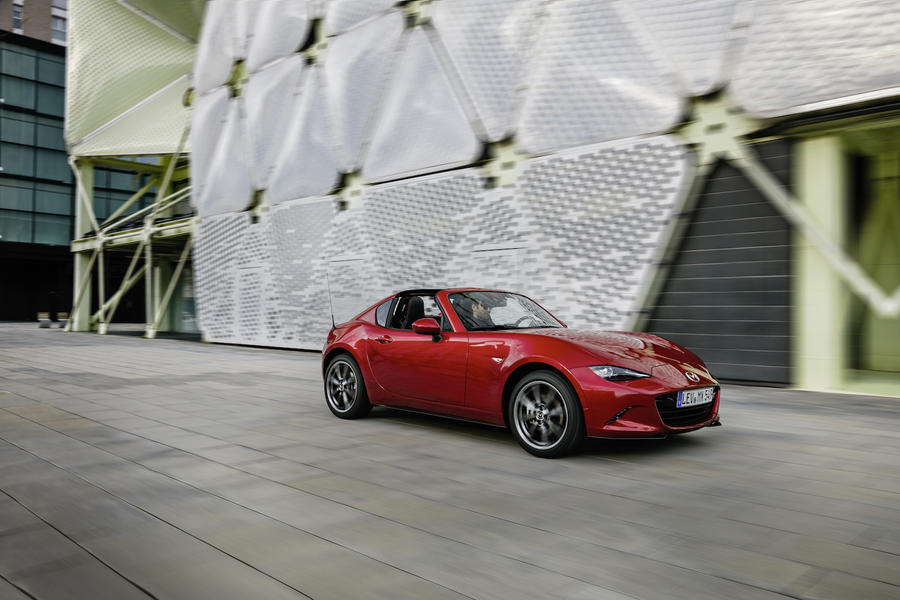 The gearshift isn’t the only thing that will delight. Despite the extra weight, the handling still feels like it does in the soft-top. The steering is keen for every input and points the nose into a corner with a deft flick of the driver's wrist. And the suspension remains soft but not sloppy, helping it to ride out mid-corner intrusions without suddenly upsetting the Mazda’s inherent balance.

But is it as refined as they'd hoped? Well, yes and no. The ride is superb for a car like this, but then it always was. Still, there does seem to have been an extra element of compliance levered in, although without a soft-top to compare it with, that could merely be the mind playing tricks - tricks created by the generally hushed cabin, road noise having been significantly reduced. Up to 50mph or so, you can see why you’d choose this RF over the regular roadster. Then you get to 70mph and it falls apart. Wind noise where the roof meets the side windows is pronounced and detracts from the sterling efforts elsewhere.

Drop the roof and things are no better. The extra protection afforded by that rear roof section means buffeting has been largely banished. But that leaves you zeroing in on the drone behind your ear, caused by the wind being scooped up and then circulated loudly around those flying buttresses. 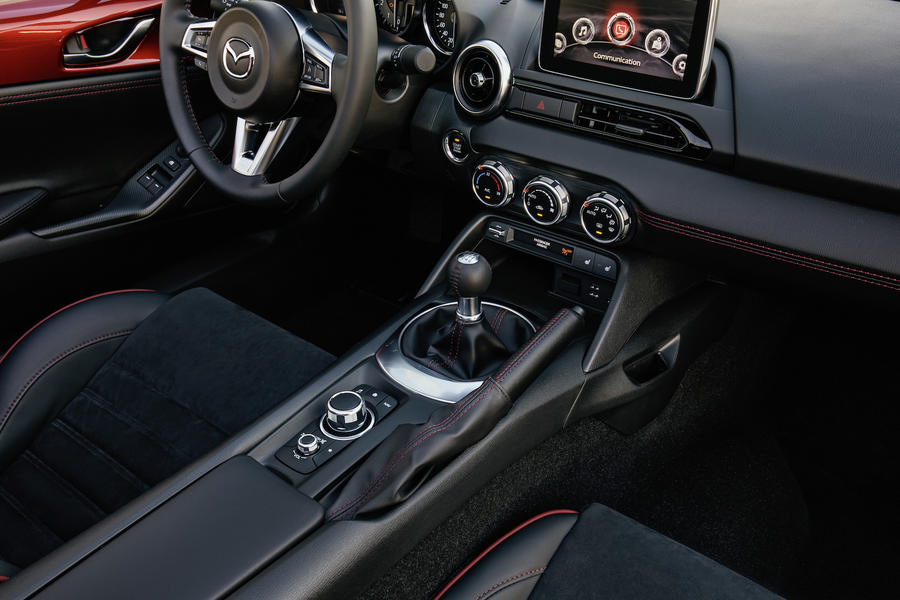 Mazda says there are those who crave a small sports car but simply won’t buy a soft-top. The RF is born to alleviate their fears by offering greater perceived security and better refinement. Yet on that last score, it needs a bit more work.

It’s still a proper MX-5 to drive, but to truly justify that £2000 premium over the soft-top, it needs to do more to smooth off a couple of rough edges. Then, looks aside, it would be a really compelling choice.

I think one of the big

I think one of the big reasons Mazda sold so many of the previous 'hard top' version was that it looked exactly like the soft top when the roof was down. I'm not convinced by this one, especially the naff faux side windows.
yvesferrer 19 January 2017

looks aside, it would be a really compelling choice...

Quite! "looks aside, it would be a really compelling choice..."
Looks ARE important for fun-cars! Buy a Peugeot or Seat if you are happy with a EuroBox!
To my mind, the main reason for the failure of the old Triumph TR7 sports car was precisely that: its looks! it looked bloody awful! A wedge on a short wheel-base! It flopped!
Mazda have the courage to offer something a bit different to tin-boxes, let's embrace it! It is a fun-car, not a racer; drop the top and enjoy a cruise!
MaxTorque 19 January 2017

Whatever its dynamic strengths, the mx 5 is hobbled by some tragically frumpy looks. That front end on its own would be enough to completely put off the majority of potential buyers.
What on earth was Mazda thinking?
A88A 29 January 2017

Whatever its dynamic strengths, the mx 5 is hobbled by some tragically frumpy looks. That front end on its own would be enough to completely put off the majority of potential buyers.
What on earth was Mazda thinking?

Your having a laugh aren't you, I own a recaro sport ND, I've never had anyone say they don't like the looks of the ND, I've even had people come up to me to compliment it, thinking it was another make, not an MX5. Sure there are those who don't like it, life would be very boring if we all liked the same things, but the one thing you can say about the new MX5, most people are genuinely surprised at how good it looks compared to the previous one.

Soo many people diss the MX5 for being a joke, everyone of these people hasn't driven one and those that have and still criticise it for not having enough horse power and being too soft, hey, guess what, that's why it's so much fun, it's got just enough power and is a great to drive on crappy British roads, because the suspension is softish, unlike most other sports cars. If you want a sports car with more power and flatter cornering, you need to spend substantially more money. Considering Mazda had virtually no competition, until they started building the 124 for fiat, they are making a great car.

The RF, will sell, but I can't see it having the same success as the previous powered hard top version, I think they made a mistake not doing a pht ND, people want the security of a hard top with the looks of a roadster with the roof down.