The Aston Martin DB5 is a car that once defined a brand. It was the chariot of choice for Mr Bond himself, and the resulting exposure meant this single model helped to shoot Aston Martin into the global limelight.

It was also remarkably good at being a luxury grand tourer, if Autocar's road test from 1964 is anything to go by.

“More and more cars today can reach the magical ‘ton’, but those that can do it with the ease and rapidity of the Aston can be counted on the fingers of one hand,” is the explanation in the near 52-year-old issue.

“It is a car that defies definition, for it can put on so many widely differing characters that it always seems tailored to one’s mood of the moment,” the article continues. “Pottering home through a city’s evening exodus, whittling through strings of weekend tourists, or gobbling up great strings of concrete motorway like an Italian with a plate of spaghetti, the Aston makes all of these light work and comes to the end asking for more.”

Priced at £4248, including tax, the DB5 wasn’t far off the value of a semi-detached house. Yet the Autocar road test team remained convinced that the price was justified, especially after subjecting the DB5 to some high-speed testing on track. 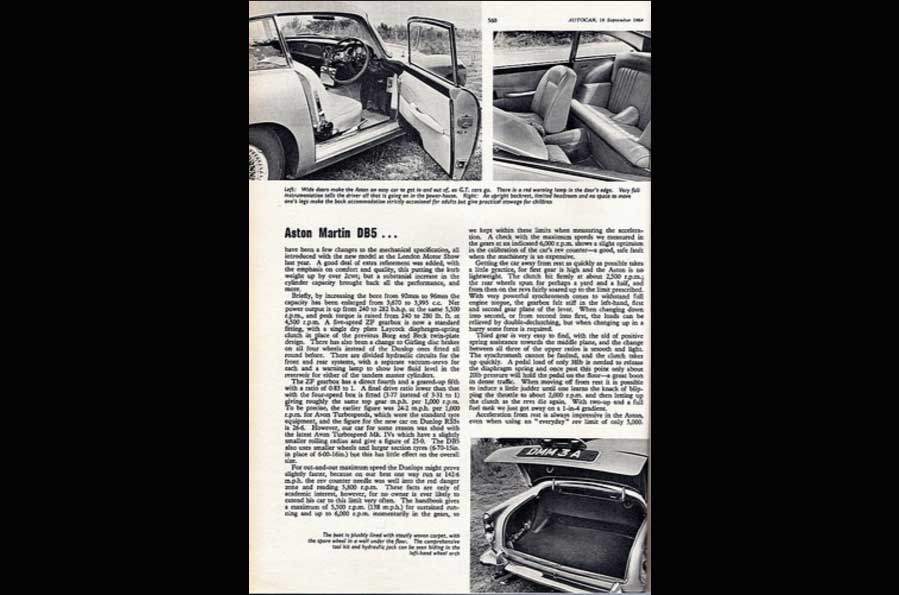 “During several fast laps of a closed test circuit, we tried to find the limit of adhesion. Initially, the car under-steered, but as we got faster and put the power on earlier there was a progressive change to oversteer. We were then able to slide the bends more smoothly with opposite lock, with no qualms whatsoever, and well within the width of the road.”

The DB5, with its 4.0-litre six-cylinder engine, produced a healthy 282bhp and 280lb ft of torque. It weighed a little over 1.5 tons and could accelerate from 0-60mph in 8.1sec. Top speed was more than 140mph, making it faster than the Maserati 3500 GTI but nearly 10mph slower than the Jaguar E-Type.

Our road testers commended the car’s five-speed ZF gearbox for its “powerful synchromesh cones” that could “withstand full engine torque,” but admitted that their strength meant the ‘box “felt stiff in the left hand”. They recommended using force “when changing up in a hurry”.

While the DB5’s controls may have required its driver to be of a burly stature, a breadth of talent that enabled it to be a fine grand tourer and talented performance car means that it has much in common with its great, great, great, great, great grandchild, the all-new DB11.

Over the years I have read many comments about the ZF gearbox being heavy and difficult. I thought the same when I owned a DB5 until a friend of mine taught me to let the very effective spring loading do all the work. Then the change became light and positive no matter how fast the change. I still use the same technique to this day

It was great choice as the

It was great choice as the first Bondmobile. The Aston Martin classic DB5 has appeared other shows & movies. The sales must hit at that time during Goldfinger very excellent. As the most loved & classic Bond car forever. Remembering the return Thunderball last time it appeared in TV series till 1995 Goldeneye as Bond off Duty Car. Again appear in Casino Royale as Bond winning car before his new Aston Martin DBS V12. Skyfall again come back with shock destroyed back to life SPECTRE thanks to Daniel Craig. Wheeler Dealers other cars show as I told by Bond fans & Aston Martin fans saying they never afford a second Aston Martin DB5 or any classic because the cost of classic Aston Martin today. Wheelers Dealers only had the Jag Based DB7. If I bough a DB5 with a lot do repair I get done but never sell it but I have auctioned in good price.
Sporky McGuffin 11 August 2016

It seems a shame that the

It seems a shame that the scans of the articles in these posts aren't high enough resolution to read the original reviews. Any chance of an improvement on that?
View all comments (4)