BACK TO ALL OPINION BLOGS
Currently reading: Matt Prior: we need to save the Audi TT
UP NEXT
Remembering Clive Sinclair and the launch of the C5

Matt Prior: we need to save the Audi TT

Ingolstadt has cast doubt over the future of its two-door sports coupé, but now looks like the perfect time for its reinvention
Share
Open gallery
Close
Share story

I still remember the first time I drove an Audi TT. Not because it was a particularly exciting drive or because I went somewhere extraordinary. In fact, beyond knowing it wasn’t to the north of Scotland or across Route 66, I don’t recall exactly where I got in it, when it was, where I went or how long it took.

But what I do distinctly remember is being wowed by its fantastic, immersive interior design: the letterbox view outwards; the cocooning high window line; the industrial/nautical inspiration for it all that meant it had air vents that looked like portholes and slabs of aluminium (real or, more likely, not) doing a decent job of looking like structural components.

Because, remember, Audi’s range at the time comprised the A3, A4, A6 and A8. It wasn’t a bad-looking lineup; the first-generation A4 (1994) had started something interesting, and the ’98 A6 was quite elegant – the first car I remember, too, having little red ambient lights in the roof,  to cast a warm glow over the interior. Sounds like a right nightmare. But none of them was the TT.

Nothing was quite like the TT, even though there were other good-looking, even outlandish, cars at the time. There was the Ford Puma, the Alfa Romeo 156, and the ’90s was a decade that brought with it the Fiat Coupé and Alfa Romeo GTV. 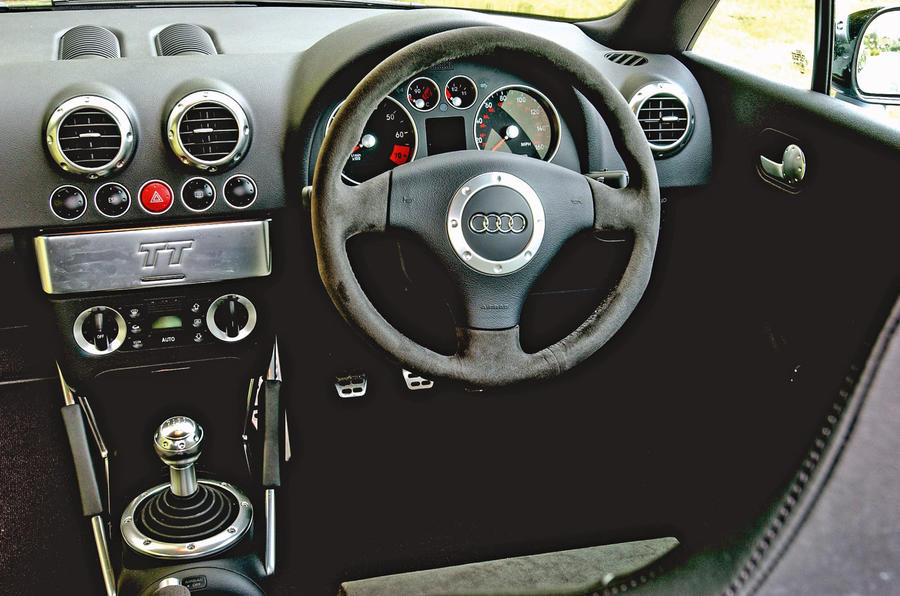 Nonetheless, the TT came as a bit of a shocker. There was the mid-decade TT concept, photographed apparently inside a massive turbine hall or something. And then pop: there it was on sale, looking, if anything, better than the concept.

So we bought them. We bought loads of them. Loads to the extent that I wonder whether the TT was the car that taught Audi it could do well filling what had previously been thought of as niches. By the end of the first-generation TT’s production run, in 2006, Audi had added its first Q model, the R8 and Allroad models to its range. And the A2, of course, which had been and gone. Shame.

But now, three generations down, apparently it’s the TT that’s under threat, seemingly because we’ve stopped buying it in big enough quantities. It’ll go on until 2022 but, in the same two-door form, possibly no longer than that.

Which would be a pity because, what with the Porsche Cayman, Toyota GT86/Subaru BRZ, Toyota Supra and Alpine A110, the small coupé market has seldom looked quite so compelling.

Perhaps that’s part of the problem: we’re buying those, or hot hatchbacks, and not TTs. And, while I couldn’t honestly implore you to buy a TT over a great-driving coupé, if the choice is the Audi or a hatchback, do buy the TT. If nothing else, it’ll be lower, lighter, more compact and a lot more interesting.

And this, I think, is important. The Toyota GT86/Subaru BRZ look like they’ll be replaced like-for-like, even though – how to put this? – I don’t think it’s Toyota’s most profitable vehicle. But I think Toyota’s bosses know, at the moment, anyway, that making interesting cars is good for the wider business.

There are “emotional discussions” in Audi’s boardroom about the TT’s future. I hope they go its way because an Audi range without the TT would only be a little per cent smaller, but a big per cent duller.

Age catches up with the pool of buyers.

I am about to forward this article to a friend. Her husband just parted with his first love his 2013 Audi TT that was murdered by hurricane Florence in September of 2018.  It was his first new car and he bought it while they were dating. Was the car they took on their honeymoon and brought their son home from the hospital. It was big enough to fit their daughter in as well when she arrived. But my friend out her foot down when they moved from New York to the Carolinas that she was not going to be trapped at home so the minivan was bought. Surprisingly the TT was killed by less than two feet of flood water none of it entering the cabin but totaling enough of the electronic components to write it off. A direct replacement was briefly considered but now sore back, knees and practical needs said Honda CRV.

We need to save the British car industry

Not have yet another Audi on the roads zzzzzzz

Then buy a Lotus and stop bitchin'.

always had issues with the tt

before the mk1 was launched i was hoping it would be somehow reminiscent of the old quattro, the proper one, but it wasn't. i'm not saying it was a bad car or that i didn't like it though. when i look at the current one i keep wishing it was an R4; mid-engined, with a lower bonnet line. Audi's boxter/elise. Also, the cabriolet with the roof up looks better than the coupe. It either needs re-inventing, or going back to the concept; as with the beetle, the plot's been lost a bit and the sales went with it.