BACK TO ALL OPINION BLOGS
Currently reading: Why the perfect fleet needs two Vauxhall Insignias
UP NEXT
Opinion: Why the A6 E-tron is an Audi that really matters

To stop his Mercedes E350 V6 chewing a hole in his wallet, this writer has gone mainstream
Share
Open gallery
Close
Share story

In the last eight months I have bought not one but two decade-old Vauxhall Insignias.

The first one - a 2009 2.0 turbo petrol hatch in range-topping Elite trim - was so impressive I have just bought another. My latest acquisition - a 2010 estate - was an attempt to perfect the formula.

The 2009 car is a hatchback with every extra aside from DAB radio - the latter something I have missed having over the last few years. It was a one-owner car that had washed up in a tiny dealership in a small Yorkshire town.

It rolled on 60-quid-per-corner Chinese tyres and the brake discs were thinner than a dinner plate, but it was an honest low-mileage car with a main dealer service print-out and an interior that looked showroom-fresh.

The 2.0 turbo petrol Insignia is a rare machine, but one I’ve had an eye on since driving one back in 2009. It was a loaner while my long-term Insignia diesel was in for a software update. This petrol Insignia is powered by a 220bhp 2.0T engine equipped with twin balancer shafts. If it sounds familiar, that’s because it’s the same engine used in the Saab Aero models of fond memory.

Coupled with GM’s long-serving and ultra-reliable six-speed slush-box, the car is a quiet, smooth and very nippy way to travel. Smart inside too, with big electric front seats (leather and heated, of course). The heater and ventilation is a strong point as well, and the crash-test rating top-notch.

Of course, there’s plenty in the Insignia’s make-up that was executed by Saab engineers. Indeed, they told me so themselves (though the super-hot heated seats are a give-away). This is, after all, the sister car to the very short-lived Saab 9-5.

The 2009 Insignia was not faultless, but I had bought the 32,000 mile machine for a reasonable £4995. The comedy tyres were junked for Goodyear Vector all-season tyres and the brakes renewed. There was one mechanical fault. One of the VVT solenoids was playing up. A replacement was a reasonable £150.

And therein lies one of the big reasons I’ve gone for a double-hit on Vauxhall: The price of parts was an eye-opener compared to my experience with my other car.

I also have a rare 2010 Mercedes E350 V6 petrol estate. There’s no question it is a fabulous car. But last summer it was clearly not running right, despite being serviced by a Mercedes specialist and getting a clean bill of health. It started emitting a lot of smoke and the exhaust tips looked like they belonged to an old diesel van. 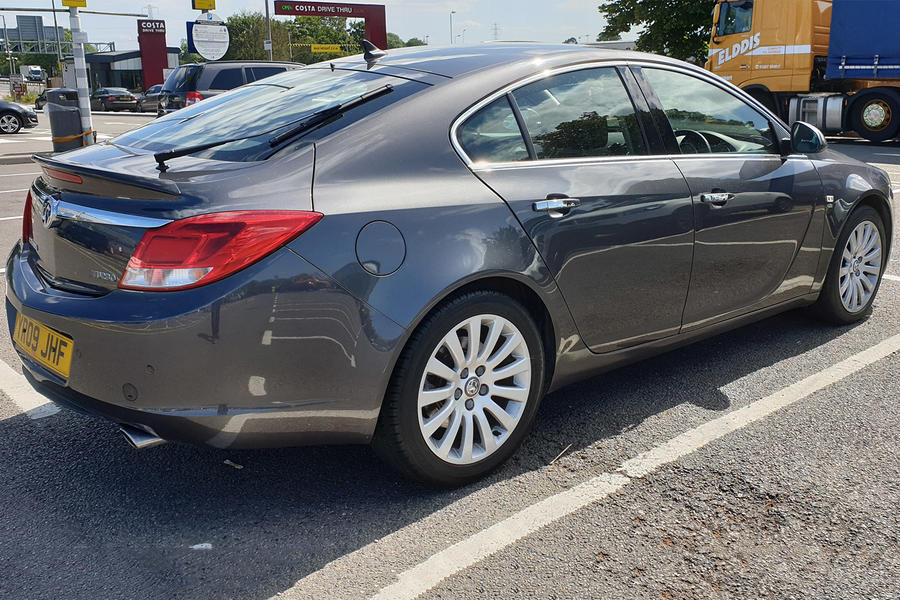 Its rarity confounded a few garages until another specialist eventually got to the bottom of the issue. ‘No1 injector has failed. They are £950’. For all six? ‘No sir, just for one’. The fix worked and, after a few months of using engine cleaner additive, the Merc is now running extremely well.

But the cost of premium brand replacement parts is not something I can make peace with.

Even back-to-back with the Mercedes, the Vauxhall made a good case for itself. In one area - the auto highbeam headlights - the Vauxhall was way ahead of the Merc. Out in the Surrey Hills the Insignia’s flawless auto high beam and impressive low beam performance is a big, big plus. As is the engine’s mid-range pull.

Trouble was, the Insignia is a hatch and I, with only one car, needed the big flat load bay of an estate. What chance of finding an identical Insignia 2.0T Elite but in estate form (and with a DAB radio)?

Not as long as you’d think. One flashed up at the Vauxhall main dealer in Bedford this month. A 2010 with 38,000 miles, one owner, full history. The same colour but with a beige interior. I bought it on the spot for £4995. I added a two-year main dealer warranty for £495.

The interior is even more showroom than the hatchback and it feels a tad smoother and nippier. The boot isn’t as good as the E-Class (what is?) but with a decent set of all-weather tyres, this car should provide reliable, useful and decently rapid transport with sensible running costs. Indeed, on the first motorway run, the trip computer assured me I had averaged 40mpg.

Nothing’s perfect though. Seems the extra weight and massive 245-width tyres of the Tourer pushed it into the top tax bracket. Still, the extra £200 a year is a premium cost that I can live with.

Vauxhall boss: “We need to make vehicles with greater appeal”

Never saw many estate Insignia, if I did see one, they were usually rammed with the reps stuff, or full of tools for whoever they worked for, shame really, they were good looking cars.

A bag of sand for one injector, why do mercedes insist on pulling peoples pants down not once when they buy the car but twice when it needs fixing.

I find that most M-B parts from a servicing point of view are pretty reasonable, and even cheaper in many cases than Japanese vehicles for example.

However every now and then you get a seemingly ludicrous parts cost as illustrated by the injector cost mentioned. There is no way this can be justified.

Power steering pipes are also notoriously highly priced by M-B for example, and yet Brake discs/pads very reasonable. No rhyme or reason I guess.

The brakes are made by 3rd parties in common sizes and will fit a range of cars from various manufacturers.

M-B Price gouge where they have a monopoly - although part of the problem is that they don't have any sub brands like Seat or Skoda which give parts a lifespan beyond a given generation.