BACK TO ALL OPINION BLOGS
Currently reading: Understanding why the 2021 C-Class has ditched the six
UP NEXT
Opinion: Mercedes EVs will get you home on the range

Understanding why the 2021 C-Class has ditched the six

Four-cylinder power across the board for Mercedes' latest saloon will disappoint some, but makes a lot of sense
Open gallery
Close

It’s only natural to mourn the death of six-cylinder engines in the C-Class line-up, but the truth is that Mercedes’ best-selling car has one overriding objective in 2021, and charismatic engines aren’t necessary to achieve it.

You might have read that the 3.0-litre straight sixes would have demanded an unworkable extension to the engine bay and front overhang, but I’m not sure that I buy that. The W206’s front overhang is already 10mm longer than that of its predecessor, and if Mercedes wanted those big mild-hybrid engines to fit, it could have done it. Instead, this is a ruthless business decision.

The objective, then, is to offer buyers a slice of the S-Class, only for much less outlay than the brand’s flagship demands and without the driver needing the spatial awareness of a harbour pilot. Mercedes-AMG is different, but Mercedes-Benz is happy to leave the thrills to BMW and the excellent 3 Series.

This latest iteration of C-Class may have quicker steering, rear wheels that can pivot and improved torsional rigidity, and that all bodes well for driver rewards, but that certainly isn’t the priority here. Mercedes knows that C-Class owners instead want space, rolling refinement, cutting-edge technology and, of course, a sophisticated exterior design. 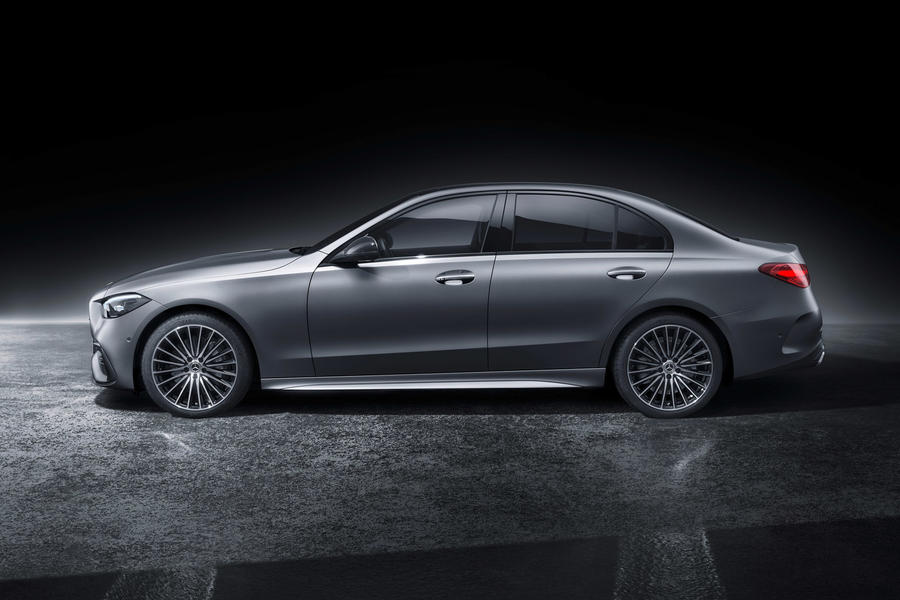 This new car seems to be in a position to deliver these elements. The W206 will have the longest wheelbase of its premium rivals and, make no mistake, in this class, the 35mm increase in rear leg room is massive. It’s equivalent to an AMG model gaining 100bhp between generations.

Air suspension, revised kinematics and slicker aerodynamics also look likely to build on the outgoing car’s fine road manners. And as for the tech, it remains to be seen just how well the new MBUX infotainment works (I suspect we’ll miss the click-wheel), but the mammoth screen and switchgear-free environment are clearly inspired by the S-Class and possess a minimalistic visual slickness that won’t go unappreciated among customers.

It follows that BMW probably doesn’t have too much to worry about with the new C-Class. But Audi? We’ll have to wait and see.

Next Mercedes-AMG C63 to swap V8 for hybrid four-pot

The six cylinder C-Class has never been a big seller anyway, so I am not surprised it has been dropped altogether.

All about refinement, I think not. There's nothing more undermining of a refined driving experience than a 4 cylinder motor, especially if it's a diesel.

This move is all about on paper CO2 emissions and the ever increasing fines they bring for manufacturers who don't hit their fleet emissions targets.

On the bright side as far as refinement is concerned, the next generation in 8 years or so will be super refined, as it will be fully electric. This generation is merely a stop gap.

Especially with the ability to drive electric only.  Having had a C350e of the currentl range, the difference is jarring.