BACK TO ALL OPINION BLOGS
Currently reading: Lexus may be reaching a turning point in Europe
UP NEXT
Opinion: historic racer David Tomlin like a phoenix from the flames

Lexus may be reaching a turning point in Europe

With dramatically styled new models, and a range of hybrids, Lexus could be about to take off in Europe
Share
Close
Share story

It’s almost 25 years to the day that Lexus first came to the UK, with a LS400 being shown at the 1989 London Motor Show in Earls Court. And that very same model went on sale here a few weeks later at the start of 1990.

It’s hard to quite recall the impact that car made. In 1983 the then boss of Toyota decided to make the world’s finest luxury car. Some 1400 engineers and millions of dollars later the LS was launched and made existing rivals from Mercedes, BMW, Jaguar, and the like, seem like crude anachronisms.

It quickly became the best selling luxury saloon in the US. Which was job done as far as Toyota was concerned as that was the market it had intended to conquer, this being years before China emerged as a major consumer of luxury cars.

More major success followed in the States, not least with the RX that invented a format US buyers went for in a big way: the luxury crossover. It remains the company’s global best seller too.

After a quarter of a century though it’s worth reflecting that Lexus has proved far more problematic in Western Europe for Toyota’s top brass. Maybe it’s the fact that we aren’t as swayed by ‘new’ brands as the Americans, and latterly the Chinese. Nor its attention on dealer service and reliability.

It’s also been true that Lexus hasn’t historically made cars primarily for Europe. For years there was only that V8-engined large saloon, when European luxury buyers favoured smaller, diesel-engined cars. Then again, even when the company turned its attention to those they were unsuccessful to the extent that the trick wasn’t repeated.

Even now Lexus doesn’t do diesel. In fact 97 per cent of its European sales are petrol-electric hybrids. But there are signs that as the company is celebrating its silver jubilee it’s finally starting to get a foothold in Europe. The new NX crossover has had record advanced sales, whilst the big cheeses are promising that its ‘emotional and polarising’ styling will be repeated for all future models.

They’re also banking on a decline in the appeal of diesel as prices rise, the tax regime gets tougher and more focus is placed on tailpipe emissions, which is where petrol hybrids have a clear advantage.

So maybe, just maybe, Toyota’s massive investment on making Lexus a European success is finally paying off. It’s going to be interesting to watch. 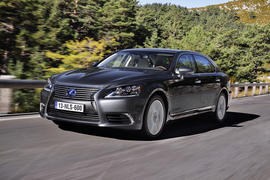 Petrol hybrids are the key

Incredible reliability (if done the Toyota way) and no issues with diesel fumes. It's starting to look more and more like Toyota knew exactly what they were doing and everybody else has gone down a dead end with powerful, yes, but dirty and complicated diesel powertrains. See VW for a prime example of this folly. Even their petrol units can be troublesome.

I get to drive my 2.0 diesel Mondeo and my wife's Prius. I love the Mondeo, it's a great drive and has plenty of power. But the Prius will never go wrong and is much cheaper to run all round, including fuel costs. There's a place for both, but it's the Prius that has my utter confidence and respect and is the car we intend to keep for the long run.

If only Toyota could manage to make their petrol hybrids a bit more powerful without killing fuel economy or making them too complex and fragile. Then they'd clean up.

Design elegance is what Lexus is lacking

What Lexus is lacking now is the elegance in their design. The styling elements on most of the current Lexus cars are overdone & a bit of hit/miss affair, (only the Lexus ES model has the best execution of the spindle grille design language). Lexus needs to refine & play a balancing act on their design language.
winniethewoo 14 November 2014

That ES is totally bland. Its the automotive design equivalent of beige gap chinos and white m&s shirt. This is exactly what people dont want from a prestige car. Name one prestige car that is successful in Europe that is that bland, polite, inoffensive? Audi, BMW, Mercedes their design languages all make statements. That is what people want over here. You must be an American, where any design at all is better than the garbage churned out by GM et al.
Andrew 61 13 November 2014

It seems to be a Make in no

It seems to be a Make in no man's land ? Not a must have or stylish or class leading with ordinary handling/ engines. Depending on your particular fetish Audi, BMW,Merc, Volvo all do it better.
View all comments (9)