BACK TO ALL OPINION BLOGS
Currently reading: Could EVs bring coachbuilding back to the mainstream?
UP NEXT
Steve Cropley: Why I'm worried about Jaguar

Could EVs bring coachbuilding back to the mainstream?

Once a frequent sight on our roads, today coachbuilt cars are a luxury domain. That could be set to change
Open gallery
Close

There’s a heap of reasons for this. First, there are almost no modern cars made with a separate chassis capped with non-structural body panels. A separate, load-bearing chassis construction makes it much easier and cheaper to reshape cladding panels because they do not significantly contribute to a car’s stiffness. Which is why coachbuilding was the norm in the early part of the 20th century and was commonplace up to the 1960s.

Modifying a monocoque, stressed bodyshell is much harder but was still relatively feasible until crash regulations made such re-engineering a lot more expensive. As crash requirements and other regulations have become ever more stringent, the viability of one-off or very low-volume models with extensively modified body panels has become prohibitive.

Prohibitive certainly describes the rumoured £20 million cost of Rolls-Royce’s rather beautiful new Boat Tail, of which just three are being built. They are the creation not only of the Rolls-Royce design and engineering departments but also the three owners, who were inspired by the Rolls-Royce Sweptail and the elegant beauty of J-Class yachts. The trio, who did not know each other, met Rolls-Royce people in various parts of the world and were closely involved with the Boat Tail’s creation from start to finish.

The process was aided considerably, explains a Rolls spokesman, by the fact that “they were all people we knew, all very experienced in appointing a Rolls-Royce, and they understood the bandwidth in which we can operate. When ambitions are allowed to run free, this is what motor industry can do.”

While it would be a thrill to see one of this trio if they ever turn up at a concours – and the spokesman assures me that they will be used rather than stored in dehumidified garages, although he does not reveal the countries in which they will reside – the re-emergence of coachbuilt Rolls-Royces is of little relevance to most of us beyond the pleasure of knowing that such things exist. 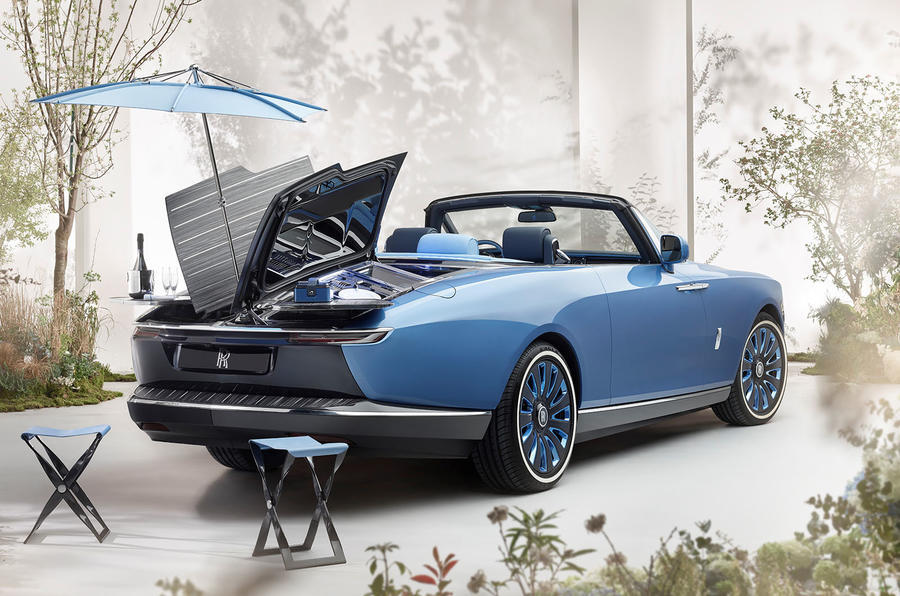 However, the vehicle architecture Rolls-Royce is using to make such cars possible might just be more exciting to those of us with less voluminous bank accounts. The new Ghost, the Phantom and the Cullinan all share an aluminium spaceframe sub-structure, its design allowing considerable dimensional and design freedom, both for series-produced Rolls-Royces like this trio and for special-build models like the Boat Tail.

Just as vital is the fact that using this architecture does not require a model like the Boat Tail to be subjected to anything like the full gamut of crash tests and approvals that an entirely new car would. It’s what makes this project viable, rather than the high price of the car, that rumoured £20 million buying you very little in the face of the half a billion it can cost to develop an all-new model on an all-new platform.

It would be wonderful to see a similar approach become more affordable, not so much from Rolls-Royce, but from other manufacturers. As the industry invests massively in the switch to EVs, perhaps some of the luxury and premium brands could consider architectures that will allow them to build special, very low-volume runs of models, a flexibility that might offer useful profit opportunities.

Ferrari, Aston Martin, Lamborghini, Porsche, McLaren and now Lotus all appear to have developed business models allowing them to build such cars viably. It would be great, and perhaps not so fanciful, if the less pricey brands such as Alfa Romeo, Jaguar, Maserati, Rolls-Royce owner BMW, Mercedes-Benz and others could do the same.

These cars would be produced in runs far greater than three, as in the heyday of the Italian coachbuilders.

There might be little or no buyer input to reduce costs, their appeal based on beauty, exclusivity and the car’s character. Maybe the new architectures required for EVs might allow such things. Or maybe the car makers have enough on their plates already. But one can wistfully dream, at least.

Mulling things over: what next for Bentley coachbuilding division?

Matt Prior: are we returning to the glory days of coachbuilding?

It would hardly bring it to the mainstream. New car buying is already moving towards being a rich man's pastime, coach built versions are not going to be any more affordable.

A concours event is perfect for the boat tail. They could set it up amidst a little tableau, to give the impression that it's being used for a picnic and the owners have just gone for a swim in the lake or something. No one is actually going to go for a picnic in one. It's a pastiche, an imagined fantasy made real. Much more interesting would be 3D printed reimaginations of much more affordable cars. MX5 shooting brake anyone? Or is that just me?