BACK TO ALL OPINION BLOGS
Currently reading: What it's like to drive an Alfa Romeo GTAm at Goodwood
UP NEXT
Opinion: Why the Festival of the Unexceptional is an annual highlight

What it's like to drive an Alfa Romeo GTAm at Goodwood

It has taken a day for our man’s hearing to return, but the buzz will stick around for a lot longer
Open gallery
Close

The vinyl-wrapped bucket seat hugs your hips but stops at your shoulders. The veneer dashboard ahead has retained its original chrome buttons, but the rev counter has been rotated 90deg clockwise. There’s a roll cage that encircles the interior, but there’s also an ashtray to your right with evidence of recent use on the central tunnel. Yes, this is a proper vintage Italian racer.

Actually, it’s the jaw-droppingly gorgeous Alfa Romeo GTAm that graced the Goodwood Festival of Speed last week. A car with motorsport history that dates back to its birth in 1970 but a power-to-weight ratio (234bhp per tonne) that shames many new sports cars of today. And now it’s yours truly sat behind this svelte coupé’s steering wheel as the 1750cc four-cylinder engine up front fires into life with a hellish growl.

The gearlever pokes out of the dash at about the same height as the EP3 Honda Civic Type R’s, but the gate action is vertical, so to engage first you push the lever left and up towards the sky. The clutch is light, but I’m told the spark plugs will be flooded if the engine’s left to tick over, so your right foot is under constant demand of heavy prods of the throttle. 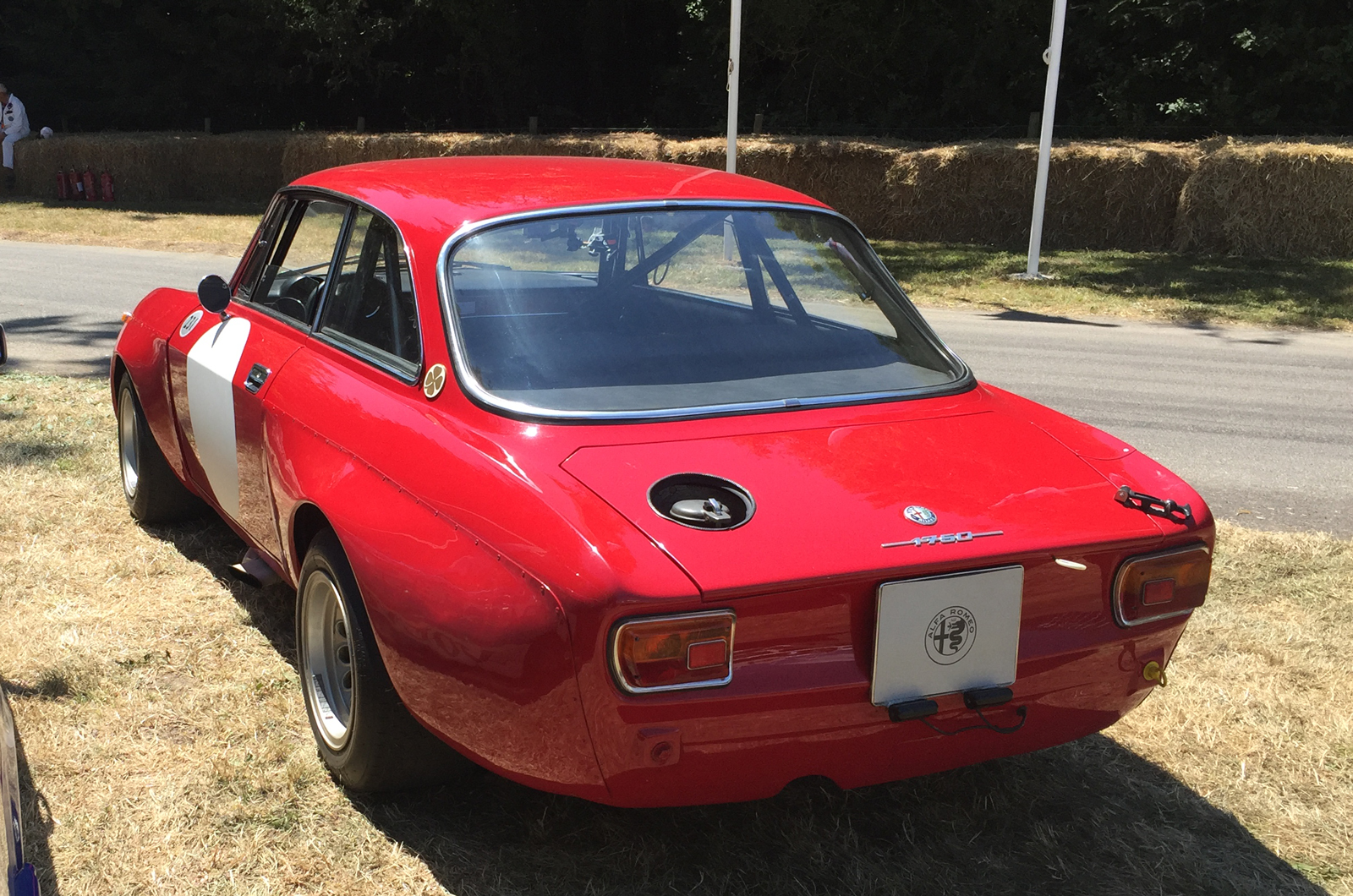 This, of course, makes it incredibly hard to navigate through the Goodwood paddock, especially on downhill sections where you have to heel-and-toe to keep the revs up while squeezing the brakes to prevent running over the hundreds of spectators, each apparently more eager than the last to soak up the raucous tone of this red two-door. It’s a workout turning those thick wheels too, due to the lack of power steering... I’m not even at the start line and I’m already exhausted. No wonder the regular driver of this car needs a smoke now and then.

But, as one of the car’s mechanics told me earlier, the paddock is no place for a GTAm. “You really have to go for it, this is what the car is built for," he said in a strong Italian accent. These words ring through my head as I roll up the start marshal and he signals me with five seconds. This is just for fun, I remind myself, but I don’t want to disappoint the wide-eyed onlookers. I ready the car for a racing start, clutch depressed, first engaged and revs rising. Clutch dropped, the wide rear wheels do an impressive job of digging into the Duke of Richmond’s driveway and hurtling this 940kg Italian machine towards Goodwood House. But the revs rise fast – unexpectedly fast. I change into second, expecting them to lull, but they rise again as if the wheels are spinning up, even though they’re not. I try third; the engine bogs and then the revs rapidly rise again. Fourth? Same again.

By now, I’m coasting through turn one, unsure which gear I’m in, revving the engine in the hope that drive will bite. But it feels like the clutch is slipping, which is odd, because the car is running with a new one. Perhaps there’s an oil leak onto it? Perhaps the clutch pedal isn’t returning fully? I have no idea, so I spend the rest of the hillclimb at half throttle, where it seems bite is maintained. I’m probably doing more than is legal on the public road, but it feels tame in a car as focused as this, with the chassis only mildly amused by my attempt to lob the car around the flint wall bend in hope of feeling what dynamism it has to offer.

Still, what a way to experience the famous hillclimb. No doubt this is the loudest car in the class, which also includes rally legends such as the Lancia Delta Integrale and Ford RS200. Plus, it's a real crowd-pleaser, garnering the attention of eyes and smartphones alike. When I coast over the finish line, I’m almost relieved. With a hampered run, there was no pressure for me to push, so I could simply absorb it all. And concerns that I had broken the car faded when it fired up and ran perfectly on the return trip back towards the paddock.

I don’t bother to ask why. This is a proper old Alfa, after all.