BACK TO ALL OPINION BLOGS
Currently reading: Supercars shoot it out for hill supremacy at Goodwood
UP NEXT
Opinion: The Monza Rally is Rossi's to win if he can find a team

Supercars shoot it out for hill supremacy at Goodwood

Which is the fastest supercar? Wet conditions preceded the start of Goodwood's Supercar Shootout, in which the braver car makers pit their models against the stopwatch
Share
Open gallery
Close
Share story

Several heavy downpours preceded Goodwood’s ‘Supercar Shootout’, which took place up the hill a short while ago, taking an already slippery track and making it even greasier.

The Supercar Runs are usually demonstration drives, but the Saturday afternoon Shootout is for those manufacturers who feel brave enough to put their cars against the stopwatch. And yours truly is fortunate enough to commentate on it.

Some 24 car makers were up for it, which is admirable given the conditions and that an ‘off’ here can be quite inconvenient (and expensive), and normally it’s lightweight track cars who’d fancy their chances the most. The conditions, though, favoured cars with four-wheel drive, and therefore the traction to exploit their power.

Step forward sometime Porsche Carrera Cup racer Paul Rees a the wheel of a Porsche 911 Turbo S, then, who set the fastest time at just 57.63sec.

That was more than two seconds faster than Nissan GT Academy winner, GT race driver and GP3 race winner Jann Mardenborough, who was at the wheel of the 2017 Nissan GT-R, which he pedalled home in 59.76sec.

The Caterham 620R driven by Jon Barnes completed the podium with an impressive time of 61.76 seconds.

Barnes’s tail-out run was arguably the most spectacular, but two other drives warrant particular mentions: Jaguar Land Rover engineer David Pook, who, on his fourth time up the hill – and his first in the wet – pushed a Jaguar F-Type SVR up in 65.41 seconds and to ninth place overall.

And to Justin Law, who for a long time held the lead after convincing a Rolls-Royce Wraith Black Label to head from bottom to top in just 65.05sec. He finished eighth overall, faster than, among others, the tenth-placed McLaren 675 LT coupé.

In finest chart-show countdown style, here’s the top 10 in full: 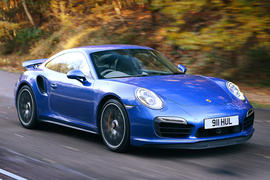 The supercar paddock and run

25 June 2016
The supercar paddock and run I think are my favourite bit of FOS. Great to watch them taking off from the start, especially if it is something as unlikely as a Rolls!

On a side note, watching the stream today it was struck how dreadful modern F1 cars look compared to classics like the McLaren MP4/6.

27 June 2016
The 911 Turbo S run was mighty, especially considering how poor the weather was at the time.