From £120,5989
The 911 Turbo's force-fed powertrain may no longer be unique among 911s, but this latest S version is still the range's most devastating in terms of performance
Open gallery
Close

The new Porsche 911 Turbo S does so many things so well that you can’t help but be overwhelmed when you first you drive it, which is exactly what I’ve just done at the Kyalami circuit in South Africa.

Perhaps the most remarkable thing about the new range-topping 911 is that, to all intents and purposes, it is a facelift of a car that has already been on sale for just over two years. The 991-series 911 Turbo S was launched during the second half of 2013, and it blew me away with its huge speed and utter competency.

This new 911 Turbo S is something else again. With an official 0-62mph time of just 2.9sec in coupé guise, the powered-up 2016 betters its predecessor over the benchmark discipline by 0.2sec. It is also among a select group of road-going 911s to boast a top speed in excess of 200mph, with an official claimed maximum of 205mph.

More than outright pace, though, it represents a significant step in terms of dynamic prowess and ability to entertain, and having driven it on both the Kyalami circuit and roads around Johannesburg, my mind is blown again. While a lot about the facelifted 911 Turbo S remains the same, its intrinsic character has evolved, making it more memorable to drive than ever.

Changes include a redesigned fuel injection system, revised inlet ports for improved combustion efficiency and the adoption of 58mm variable-vane turbochargers as opposed to the 56mm units used by the standard 911 Turbo.

Together, the modifications bring an added 20bhp, providing a rather serious 572bhp at 6750rpm. That’s 49bhp more than the regular 911 Turbo and, in combination with a 1600kg kerb weight, provides the coupé with a power-to-weight ratio of 358bhp per tonne.

Accompanying the moderate lift in power is a 37lb ft increase in torque, which now peaks at 553lb ft between 2100 and 4250rpm.

To reduce lag and provide sharper throttle response, the new 911 Turbo S also receives a so-called dynamic boost function. It maintains turbocharger boost pressure, with the throttle valves remaining open, for a brief period after you step away from the throttle. Porsche claims improved reactions when the driver reapplies the throttle, with the effect described as being more pronounced in Sport and Sport Plus modes than in Normal mode.

Drive is channelled to all four wheels through an updated seven-speed PDK dual-clutch automatic gearbox and a faster-reacting multi-plate clutch four-wheel drive system.

Along with the performance gains, Porsche claims an impressive 2.0mpg improvement in combined economy, with the Turbo returning 31.0mpg and the cabriolet 30.4mpg.

Subtle exterior styling upgrades include an altered front bumper, a revised splitter and twinned LED indicator units. There are also new 20in centre-lock wheels and the door handles have been modified to give a more integrated appearance.

At the rear, there are new tail-lights with added structure to the lenses and altered LED graphics, a redesigned engine cover with improved cooling properties and a reprofiled bumper with trapezoidal tailpipes.

Inside, a new 360mm-diameter steering wheel features a rotary driving mode controller. There’s also a new Sport Response button allowing you to call up maximum acceleration for up to 20sec in any of the four driving modes.

Further changes are focused on the Porsche Communication Management infotainment system, which receives a new, fourth-generation touchscreen and improved connectivity functions. Other options include a radar lane change system and a lift function that increases the ground clearance at the front spoiler lip by up to 40mm at low speeds at the press of a button. 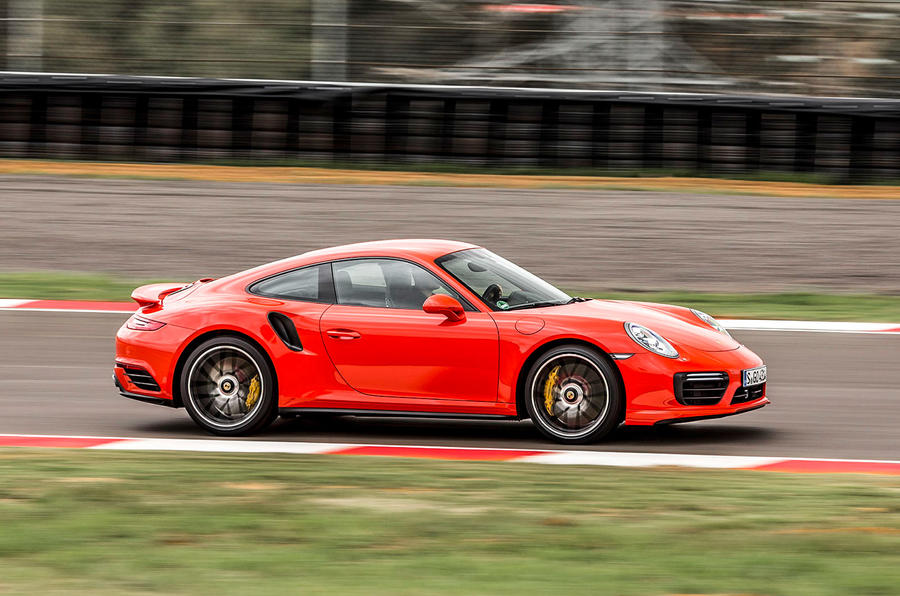 Over the years we’ve become accustomed to the 911 Turbo making incremental steps in performance midway through its model cycle. What we have here, though, is a much larger increase than is traditionally the case. The new 911 Turbo S is ferociously quick.

The headlining 0-62mph time is the figure 911 product director August Achleitner prefers to drop into any discussion as a means of outlining the performance gains made, even revealing that the 2.9sec figure it is on the conservative side. “We’ve actually measured it at 2.6sec in individual runs,” he says.

But it is the 0-100mph time of 6.8sec, including a phenomenal 50 to 75mph split of 1.8sec, that better highlights the explosiveness of the acceleration, making the Turbo quicker to 100mph than all but a handful of road-legal supercars. Not even the 918 Spyder can claim to offer the same sort of performance out of the blocks, says Achleitner.

The subtle changes to the engine and four-wheel drive system ratchet up the overall ability of the 911 Turbo S considerably, not only making it faster in a straight line but also even more proficient on challenging roads or race tracks. The most impressive factor about the handling is the sheer willingness to turn into corners and the huge momentum it manages to carry through to the exit while maintaining stunning levels of grip and body control.

Porsche says it has refined the chassis without going into too much detail about where the changes are concentrated. Whatever Achleitner and his crew have done, it works wonders. There’s greater immediacy to its actions and an altogether more entertaining feel than ever before, with the front and rear steering systems seemingly more in tune with one another, especially when you’re committed to a corner.

It is apparent the reworked underpinnings have been honed on a race track, because the instant you think about lining up towards the apex, the Porsche slices into the corner with wonderful precision. With the revised four-wheel drive system doling out power with faster reflexes than ever before, the 911 Turbo S is terrifically neutral at anything but truly insane cornering speeds. Even then, it can make you look like a hero when you overcook it on entry.

Arrive at a corner too quickly and you sometimes get a trace of nerve-settling understeer during the first degrees of lock. However, it is only a fleeting interlude before the Pirelli P-Zeros begin to bite. When they do, you’re able to exploit the added power without great fear of retribution; the rear end obeys throttle inputs with such immediacy and authority that it actually feels like a rear-drive car when you’re determined with your right foot out of tighter corners.

You need a track to get confidently anywhere near the limit of its handling prowess. Porsche has shaved a significant 9.0sec off the time set by the old 911 Turbo S during testing at the Nürburgring, establishing a new benchmark of 7min 18sec on standard tyres.

Around Kyalami, the new Turbo S felt magnificent, to be honest, with greater ability in each and every facet of its dynamic character – greater straight-line speed, greater precision, greater braking prowess and greater grip.

You get out of it after a series of hot laps full of appreciation for its ability and a yearning for more time behind the wheel. It is not a particularly taxing car to drive fast on a track, not on a physical level at least. But because it is so quick it still requires your undivided attention.

The crowning achievement is that the 911 Turbo S feels every bit at home on the road as it does at the track. Yes, there is some surface sensitivity on the low-profile rubber, but it rides exceptionally well in all but the firmest of its damper settings. And the added torque loading sometimes causes the gearbox to jolt in constant stop-start traffic. Otherwise, there’s little else to fault. The overall ease of operation and accessibility of its performance is astonishing. 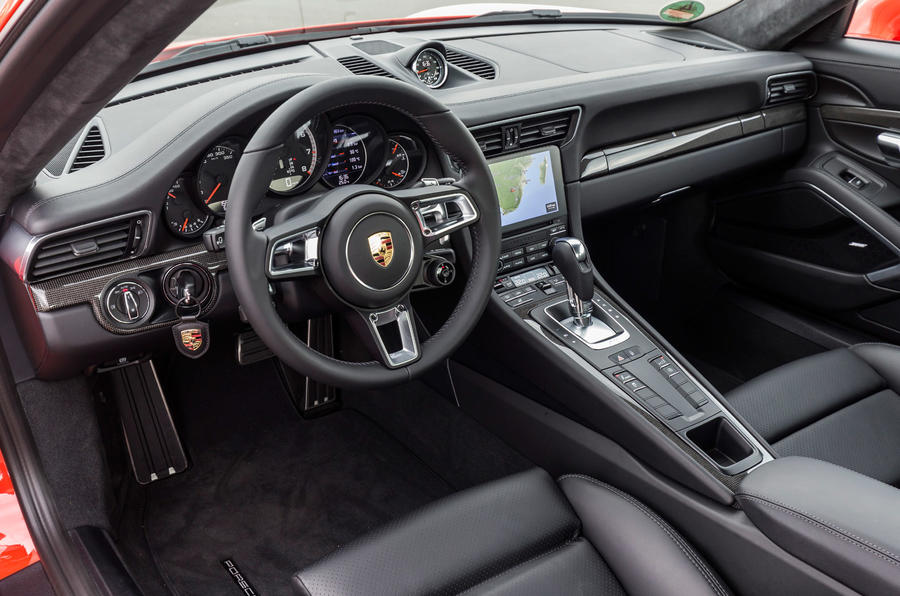 To be honest, the standard 911 Turbo offers pretty much everything the 911 Turbo S does, but for £18,848 less. Consequently, it is hard to justify the premium in pure subjective terms.

But for a lucky group of wealthy Porsche customers, none of this will matter. They won’t care about the added cost. It will be the badge that counts. This and the bragging rights delivered by its 918 Spyder-beating 0-62mph time. 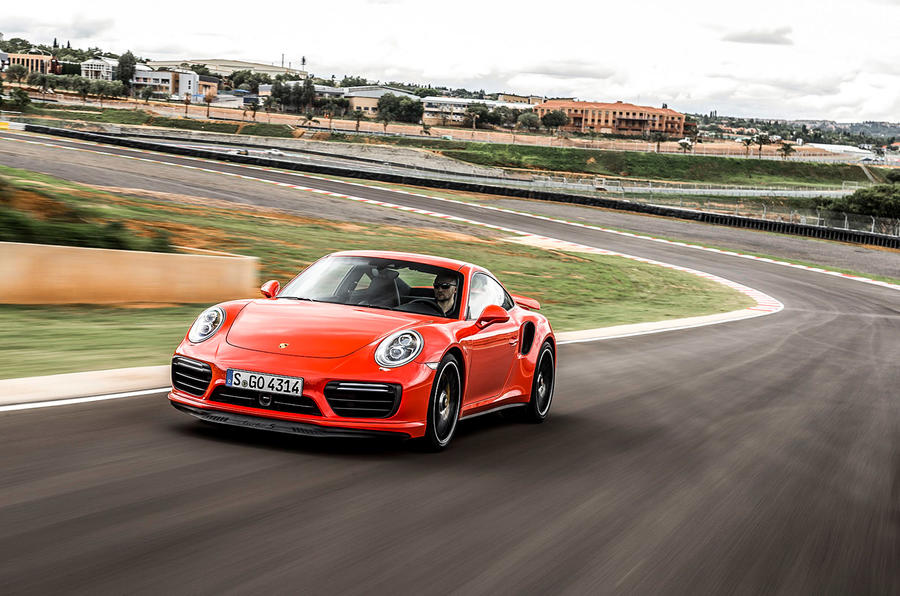 Aye Sable those hedges won't fund themselves... Lucky you...
View all comments (13)