BACK TO ALL OPINION BLOGS
Currently reading: Radical Rapture: first ride in road-legal track weapon
UP NEXT
Opinion: Mercedes EVs will get you home on the range

This 765kg two-seater's twin-turbo four-pot packs 350bhp and exploits every bit of its potential. We go for a ride up the hill
Open gallery
Close

The Rapture is Radical’s most accessible model yet, or so says company director Andreas Zielke. It’s small, relatively cheap and, most importantly, road-legal, making it much more approachable than the company’s biblical RXC track weapon.

Nonetheless, it cuts quite an imposing figure as it awaits a green flag at the Goodwood Festival of Speed's hillclimb start line, and ‘accessible’ is the very last word that springs to mind when threading yourself and your tight jeans into its cosy cabin.

But the attention to detail on the Rapture is sublime. Everything is on show, and everything looks brilliant. It’s easy to apply the built-at-home stereotype to most track specials, but the team at Radical’s bespoke new Rapture production facility in Peterborough clearly never misplace the 10mm socket drive. 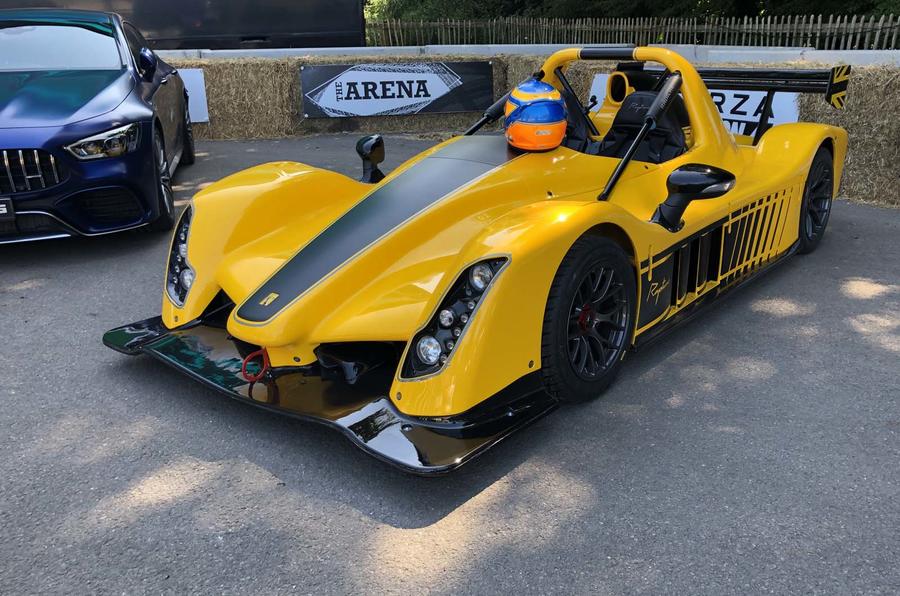 Even standing still, it’s easy to see how air can travel over the Rapture’s LMP1-aping lines almost unimpeded. A prominent nose cone stretches right back to the dashboard, and channels air around the cabin and across the newly designed bi-plane spoiler, helping to enhance downforce and minimise buffeting.

While I stand admiring its impressive construction and presence, works driver Joe Crook approaches and laments that it’s almost time for the last hillclimb run of the day, on which I shall be accompanying him, and the tyres look almost brand new. “We’ll have to do something about that,” he murmurs ominously, before slinging on his helmet. 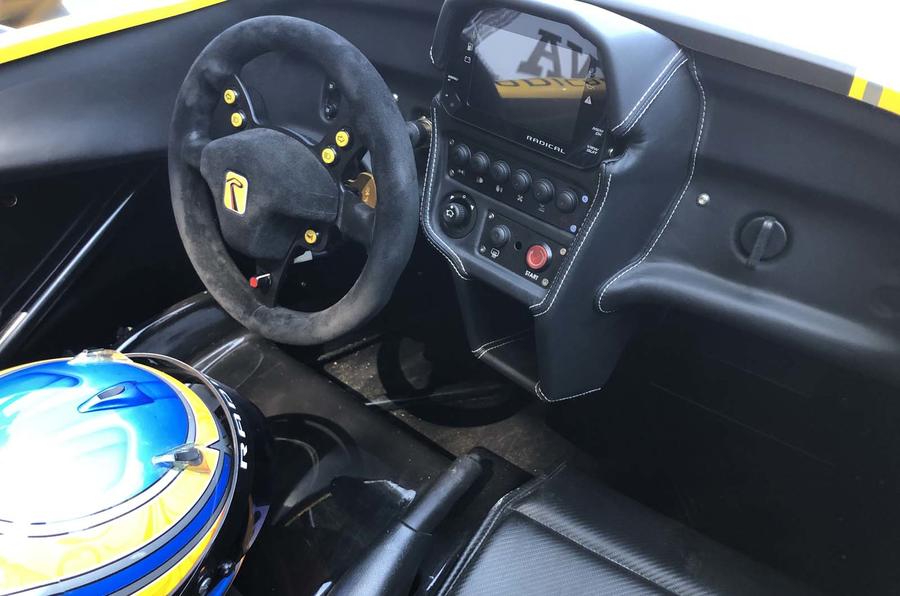 Once aboard, it’s actually a very comfortable place to be. It’s ostensibly a track-day car you can keep at home, without access to an entire Nascar-spec pit crew, but its competition origins are evident throughout. Radical will give you heating and electric mirrors as standard, but that’s mostly it. There’s a screen in the middle with a digital rev counter and all your important temperatures, a fuel cut-off switch where you’d expect a glovebox to be and a small cubby for your sunglasses. Otherwise, it’s just you, your passenger and the road.

It’s when the 2.3-litre Ford Focus ST-derived four-pot fires up, though, that you stop focusing on niceties like ergonomics and start to wonder whether a 765kg two-seater really needs 350bhp. Radical says the Rapture will do 0-60mph in 3.0sec and wring the neck of that Ecoboost unit all the way up to 165mph. Impressive figures, and they only really start to make sense when you’re in the passenger seat. 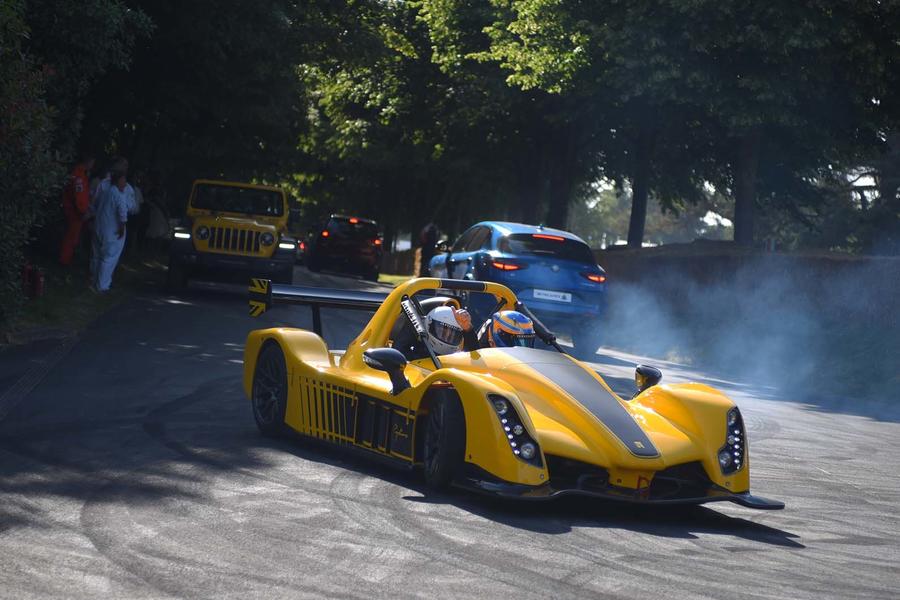 The hearty burble of the custom 3in exhaust does a passable impression of a GT3 racer, and the sound of the Rapture’s twin-scroll Ford Focus RS turbocharger spooling up has passers-by scanning the skies for the Red Arrows. A heavy clunk as we shift into first is a reminder that, despite its diminutive stature, the Rapture is very much a heavy-duty tool.

When the Rapture revs, it sounds nothing like the sporty hot hatch with which it shares a powertrain. It’s ear-splitting, and not just for its occupants but also the people around it. Happily, this meant my lovely driver Joe doesn’t hear me call him every name under the sun when he takes the opportunity to ‘warm the tyres’ with a few donuts as we head to the bottom of the hill. 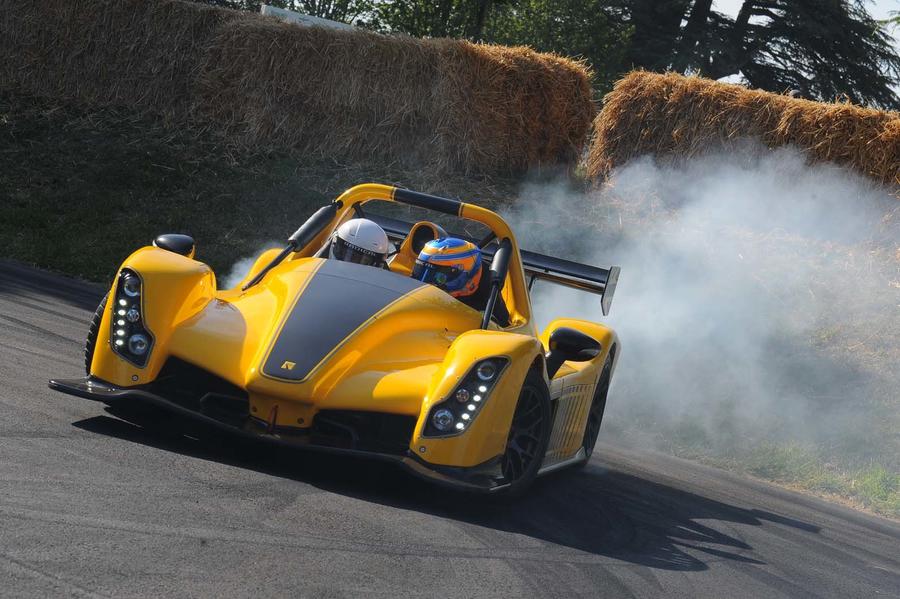 “A nice, sedate parade run, yeah?” I shout over the Rapture’s harsh bark.

“Yeah… that’s not really what I’m here for,” Crook replies.

When the flag goes down, there’s a millisecond to collect your breath, and then the rear tyres dig in and your eyes quickly make their way to the back of your skull. This car is insanely quick; 0-60mph times are just vague figures until you see them for yourself, and the Rapture made good on its three-second promise. You have to remember that this car can be driven to the supermarket every day on a normal road licence, which is mind-blowing. 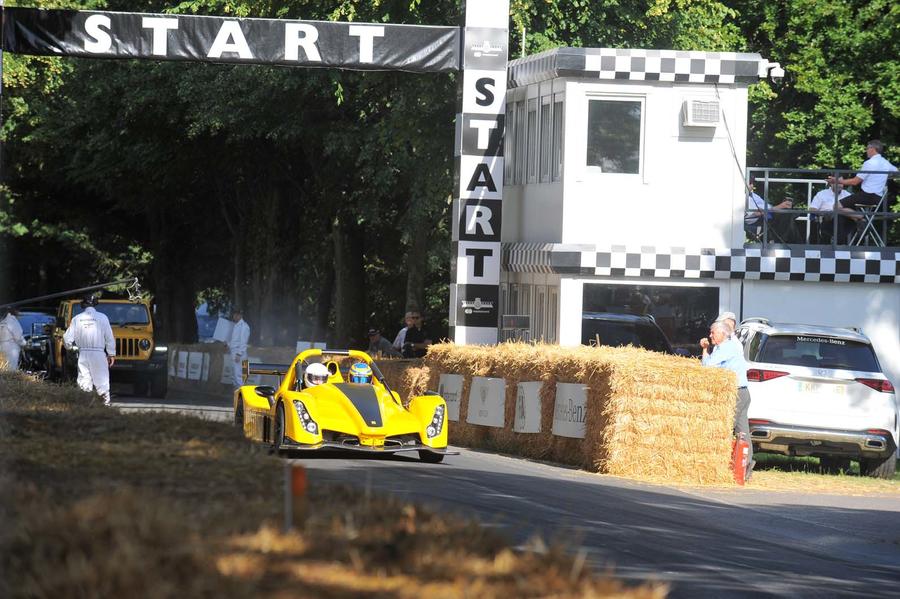 The first corner looms like a golden beacon. Good, I think, we have to slow down.

But we do not. The Rapture’s massive grooved discs and four-pot calipers feel like they could stop the car quicker than an ill-placed brick wall, and Crook seems keen to get as close to the hay bales as he possibly can. We clip the apex and power up and under the bridge, sitting so close to the ground that it begins to feel a lot like sitting atop a rocket-powered sled.

Passengers will find themselves making wildly exaggerated bodily reactions to each of the car’s movements, but it’s difficult to prevent. Coming around Molecomb Corner at speed is enough to make you feel like you're falling out, so gobsmacking is the grip of its tyres and responsiveness of its FIA-approved chassis, and desperately grab at a piece of roll-cage. But the Rapture continues onwards, tackling the chicane and narrow Flint Wall section with almost unbelievable agility, and making absolute mincemeat of the final straight. 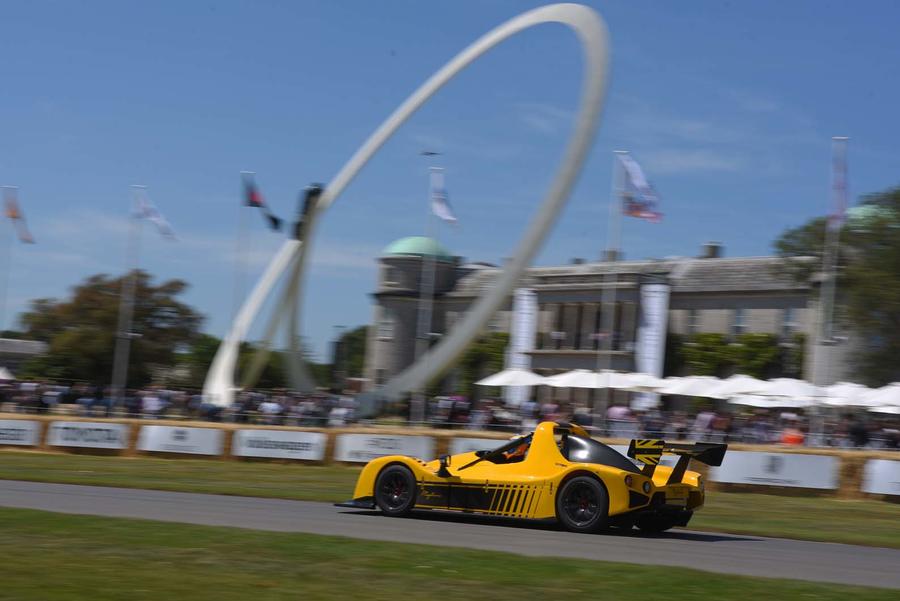 There's no time to collect your thoughts and perceptions – the Rapture doesn't have time for such formalities. However, despite the insane pace of our onward progress, I am impressed by the lack of rattles, the smoothness of any bumps and the cocoon of almost-still air in which we are huddled. Regardless of its intentions, the Rapture is a well-built and overwhelmingly safe weapon of choice.

When we pull up behind the stunning De Tomaso P72 that preceded us, a gaggle of fellow ride-alongs parts respectfully to allow the Radical through. Because, of course, it commands respect. It may be tiny, and lower than most kneecaps, but it's quite clearly a rocket launcher in potato gun clothing, and it's made quite an impression on today's hillclimb spectators.

The blistering sprint up the hill was no trouble for the Rapture. It’s already settled back into a healthy 1200rpm idle and almost feels like it’s willing us to go again - a sentiment the car and I do not share. 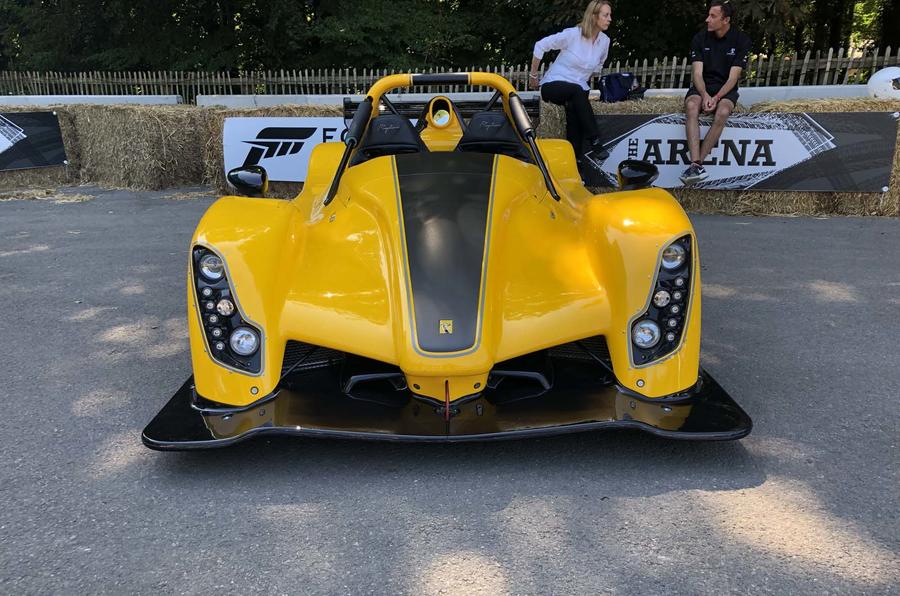 But, newfound appreciation for the sanctity of life aside, my overwhelming feeling is one of awe. This is a genuinely usable car that'll beat most supercars away from the lights, and company bosses claim it gives them a good run for their money at the track, too.

The Rapture's list price is within spitting distance of £90,000, which is a lot if you're just considering, say, the levels of interior kit. But if you want physics-defying performance that you can exploit on public roads, it begins to feel like a bit of a steal. It would be good to see people take Radical up on this opportunity, because a few of these little monsters in station car parks across the land would make the world a much happier place.

Leaving this parked up will invite the jealous to do unspeakable things to it in it etc,so, a cover would be needed,but, I doubt any owner would use there car in this way.