BACK TO ALL OPINION BLOGS
Currently reading: Why Ford is pushing for a new image
UP NEXT
Opinion: Formula E's London return was surreal but successful

Why Ford is pushing for a new image

You thought you knew Ford, but now you don't. Why does the global car maker want to renew its brand image?
Share
Open gallery
Close
Share story

Good old Ford. Good old reliable, steady Ford. Always there, always the same: a global company that feels like it’s ours because it has always invested here, and with a group of cars that you feel like you know because when you were little, Uncle Kevin had a Cortina and now Angela from sales has a Mondeo. Like knowing how to sign your own name and how much milk you take in your tea, you know what a Fiesta is. You know Ford.

Apparently, you shouldn’t. If you’ve seen the billboards and messages, you’ll know that Ford would like you to unlearn all the things you’ve been thinking about it over the years.

The billboards feature three Fords you’ll not be quite so familiar with in daily life: the new GT supercar, the latest Mustang sports car and the Edge SUV. Visit the Unlearn section of Ford’s website and the three feature heavily again, alongside some of those dreadful advertising sentences that contain words but don’t say anything. Unlearn is about “making room for improvement where there is none” and “making something out of nothing”, for example.

Unlearn is about selling more cars and making more money, actually. Which is fine. Ford is a car company and that’s what it does, although recently not in sufficient quantities in Europe where it returned a profit last year for the first time since 2011. 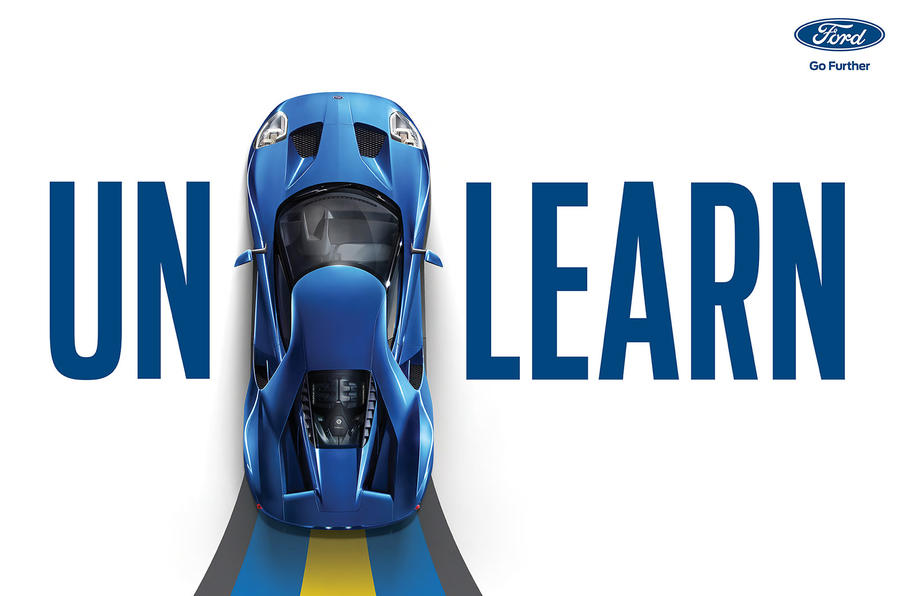 Hence the changes: Fords won’t be designed for Europe only, the line-up isn’t just the family cars you’ve known since childhood (although click on the discover the Ford range link from the Unlearn section and you’ll still find it largely is), and Ford is adding other motoring services to its remit. There’s Vignale, too. Ford wants to get a bit more exciting, a bit more premium and do more for you. All things that involve a transaction.

No problem. But it’s telling, isn’t it, that Ford would like you to change your perception of it? Ford still sells a lot of cars. The Fiesta will almost certainly be the best-selling car in the UK this year, and the Focus third. Unfortunately for Ford, they’re affordable cars, which means each sale isn’t very profitable. They’re also – like most Fords – rather good. Imagine if it churned out dross. It has rivals who do.

BMW, Audi and Mercedes-Benz don’t need you to think again about their brands. You already think they’re expensive, which is why you want one and, thanks to affordable finance deals, you can have one. And there lies not just Ford’s problem, but every other non-premium car maker’s, too. They must all know it, but not all admit it so publicly.

I always bought Fords. My Father always bought Fords. My Grandfather always bought Fords. Then 20 odd years ago, Ford desided to go down market. I have been told the desission to discontinue the new Scorpio was made before the first one came off the production line. That's why it was never finished and the designers name was never published. There was no Sierra to fall back on. The Mondeo failed as a world car and had no developement potensial in it's design for it's future. The Mk2 was biult down to a price and the Ghia model nolonger included a full spec. With the US Fusion being discontinued and the future of the Mondeo in doubt with poor sales and in need of a major rework to keep it in contension, how is Ford going to go upmarket? Even the upmarket Vignali models aren't available through the general Ford Dealers. For me, I am wondering if there might be a new Sierra or better still a Granada!! I won't hold my breath.

I was interested to read the number of complaints about servicing and repairs. I wouldn't let our local Ford agen touch my brand new Granada Scorpio, that tells you how long ago I bought a Ford!!

"Fords won’t be designed for

"Fords won’t be designed for Europe only" been doing that for about 10years Matt...called OneFord, resulted in Focus, Mondeo, Fiesta. Surprised you don't recall the strategy, I believe Jac Nasser rolled it out.
View all comments (19)