BACK TO ALL OPINION BLOGS
Currently reading: Planes, coaches and automobiles in Seoul’s sprawl
UP NEXT
Opinion: If you can't stage the Monte properly, don't stage it at all

The car-buying landscape in South Korea is in direct contrast to what we see in Britain, with Kia and Hyundai models by far the most popular
Share
Open gallery
Close
Share story

Yesterday, I flew into Seoul ahead of a tour of Kia’s various factories, research and development facilities and global headquarters in its homeland.

The impressive rise of Kia and sister brand Hyundai in Europe has made headlines over the past five years, but home customers probably wonder why we’re making such a fuss. After all, over here in South Korea, the local brands are firmly established, with their models topping the domestic sales charts each month.

As a coach driver whisked us to our hotel with a nerve-jangling amount of determination and a loose sense of lane etiquette, I surveyed the passing vehicles, of which there are plenty in downtown Seoul.

Kia and Hyundai models dominated, in the same way that the UK’s traffic is usually heavy on Ford and Vauxhall badges. Some model names were familiar – Sorento, for example – but others less so, such as the Kia Morning, which is the local name for the Picanto, or K5, which is the Kia Optima.

The occasional premium Audi or BMW punctuated the traffic flow, and recent sales figures suggest the big European brands are gaining traction in this Asian market, but, unlike in Europe, the home brands hold their own in the big saloon stakes, too, with cars such as the Hyundai Grandeur and Kia K9.

Indeed, a rare sighting of a Jaguar near our hotel by a British colleague was greeted in the same enthusiastic way that a group of twitchers might congratulate the spotter of a bullfinch.

To shake off the jetlag yesterday afternoon I strolled up Mount Namsan, which sounds more of a challenge than it really is. However, the hill makes up for its lack of stature with some stunning views of the sprawling capital and the grown-up mountains in the distance.

The lower slopes of Mount Namsan are pleasingly tranquil, with sweeping pathways through woodland, and between the trees the occasional glimpse of the city below.

Further up, there’s a road that enables less energetic explorers to reach the top, where the hubbub grows as coach after coach disgorges excited, babbling tourists, each gazing upwards at the observation tower that perches atop the mountain.

The tour coaches tend to be painted in captivating shades of purple and orange, and bear superlative-heavy slogans, such as ‘Super Air Luxury Premium Jet Special’ or ‘Excellent Express’. Some of the vehicles had emblems on their doors proclaiming ‘Star Driver’, an accolade I doubt our airport chauffeur will earn anytime soon.

What really caught my attention were the green and white buses that whizzed up the steep hill behind me, accompanied by the instantly identifiable whine of an electric drivetrain under fairly heavy load.

The electric buses have been running on a fairly short circular route up, down and around Mount Namsan for almost three years. Named e-Primus, and made by a company called Hankuk Fiber, the Namsan shuttle buses also feature carbon-fibre bodies to save weight.

Before their return journey, the buses, which can run for about 75 miles between charges, take advantage of a 20-minute rapid charge to replenish their energy via the power points at the summit.

Although I haven’t been able to discover the cost of the vehicles, it struck me as a neat solution to the challenge of transporting constant streams of people over short distances. Although I’m still proud that I conquered the hill using my own two feet. 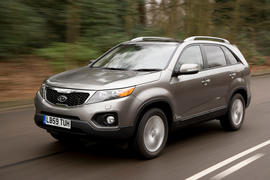 An almost class-leading family 4x4, if a little pricey given its workmanlike flavour

I've been to Seoul and in

I've been to Seoul and in many ways it is far ahead of Europe in terms of technology. more sustainable energy and transport. The underground is fantastic and the internet is 100gb/s in nearly every area.

People are nice, great city, one of my favourite places I've visited in general.

How easy is it for importers

How easy is it for importers to access South Korea? Are they still hampered by stiff import duties?

Electric buses!
We pay a lot of lip-service to environment.
But it is Korea that runs the electric buses.
Wonder, Mayor Johnson reads this.