The 1600 hp Koenigsegg Jesko has been revealed in production guise for the first time, more than two years after it was unveiled at the Geneva motor show in 2019.

Finished in Tang Orange Pearl paint with silver and carbonfibre accents, the colour scheme is a nod to the Koenigsegg CCR of 2004.

“We are very excited to showcase this pre-series Jesko in conjunction with the start of production of the 125 Jesko and Jesko Absolut customer cars,” said CEO and founder Christian von Koenigsegg. “As part of our gradual expansion, the Jesko’s pre-assembly begins at an extended 10,000 square metre facility.”

The first customer deliveries of the Agera successor are set to take place next spring and the hypercar will be sold in two forms: one that maximises performance on track, and an Absolut version tuned to break the 300mph barrier. Prices are believed to start at £2.3 million before local taxes are applied. 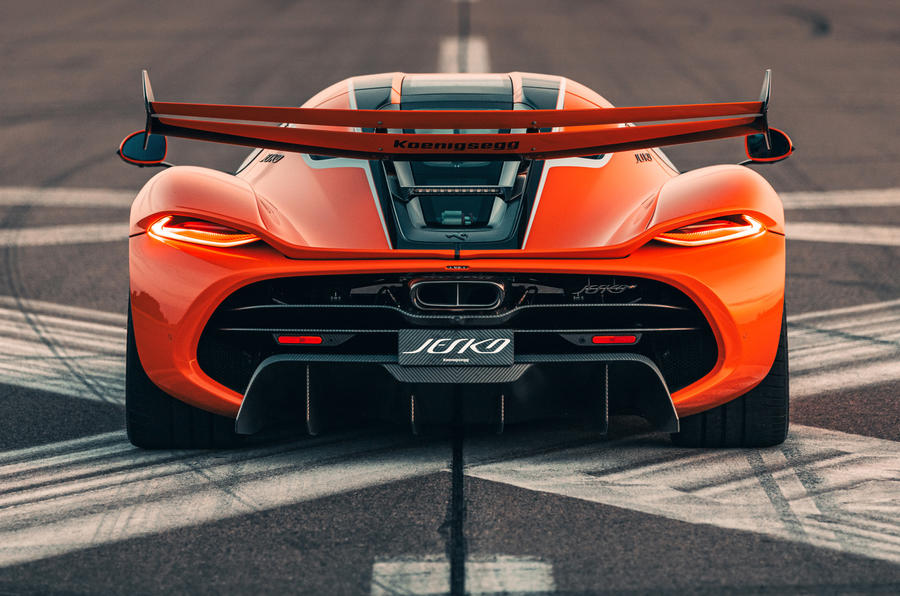 Using a V8 engine in conjunction with twin-turbochargers, a forged crankshaft and air injection, the Jesko produces 1280 hp when using 95-octane gas, but this figure rises to 1600 hp when filled with E85 ethanol. Peak torque is given as 1106 LB-FT and the car weighs just 3080lb (1400kg) in wet, road-going form.

The Jesko runs on an entirely new platform, unrelated to that of the outgoing Agera, with slightly increased dimensions and an aerodynamic package resulting in up to 1000kg of downforce.

Perhaps the most innovative component of all is the nine-speed transmission, which features seven wet, multi-disc clutches in a lightweight package believed to tip the scales at just 90kg. The set-up means the driver can change between any gear in just 20 milliseconds, making it the fastest-shifting transmission in the world, according to Koenigsegg.

“The Jesko feels very natural to drive,” said prototype driver Markus Lundh. “Because of its seamless shifting, whether up or down, everything just happens much faster. There are no delays. It is very responsive and behaves exactly the way you want it to. For a car of its size and power, it is very agile in the way it reacts to steering and does not spin out even with sudden movements at full throttle.”

Inside, the Jesko runs a SmartCentre infotainment touchscreen, with a SmartCluster instrument display integrated into the steering wheel. The display is programmed to correct for steering lock while driving, making it easier to read while cornering.