BACK TO ALL NEWS
Currently reading: Under the skin: Koenigsegg's ingenious transmission solutions
UP NEXT
From the boardroom: Polestar UK boss Jonathan Goodman

Koenigsegg won't say what, but it will hopefully reveal something special on the morning of 3 March at this year’s Geneva motor show. Rumour has it the Swedish supercar maker, known for its highly innovative drivetrains, will reveal a production car concept capable of breaking the 500km/h barrier (a smidge over 310mph).

Koenigsegg currently employs two bespoke transmission technologies in its existing models, neither of which exists in mainstream production cars. The question is which, if either, will be used to help raise the speed record bar yet higher.

The first is the Koenigsegg Direct Drive (KDD) fitted to the Regera, which does away with selectable gear ratios altogether. However, it’s not a continually variable transmission (CVT); instead, it blends three electric drives with power and torque from the engine via a Hydracoup, a special type of torque converter developed in-house.

The axial flux electric motor-generators are supplied by British specialist firm Yasa and integrated into the drivetrain at Koenigsegg. These units are larger in diameter but much shorter than conventional radial flux motors, so they resemble biscuit tins. Two Yasa 750 units fit either side of the rear axle final drive, producing 1180lb ft of torque each. The third, a Yasa 400, is mounted on the engine’s crankshaft. This produces 258lb ft and fills any torque gaps in the operating range.

The fixed final drive ratio is equivalent to the Agera’s seventh gear, at 2.73:1, but the engine produces 1085bhp and 922lb ft in its peak operating range and nothing at 0rpm. Without something to replace conventional gears, then, it would be impossible to even pull away, so the powerful electric motors add another 661bhp and 2618lb ft from standstill.

At around 3500rpm, the engine starts to come into play, feeding in torque via the Hydracoup until it locks up to provide a direct mechanical drive to the wheels.

The KDD was first shown in 2015, while the Light Speed Transmission (LST) was revealed as part of the Jesko in 2019. Koenigsegg says this ninespeed multi-wet-clutch gearbox is capable of shifting much faster than a conventional dual-clutch transmission (DCT), partly because it can make simultaneous changes between any forward speeds, whereas DCTs need to predict and preselect the next gear.

If the driver changes his or her mind, the DCT has to deselect and reselect, causing a slight interruption of torque to the wheels. DCTs are also sequential, so can’t skip gears, whereas the LST’s multi-clutch system can select the right gear instantly, bypassing several ratios if needed to meet the demand.

It’s unlikely that either design will make it into the mainstream, mainly because of cost, but that doesn’t detract from the deliciousness of the engineering. Which one will make it to Koenigsegg’s next step? Maybe neither, but it’s sure to be a treat for tech fans everywhere, whatever it is.

From Oxford to Maranello 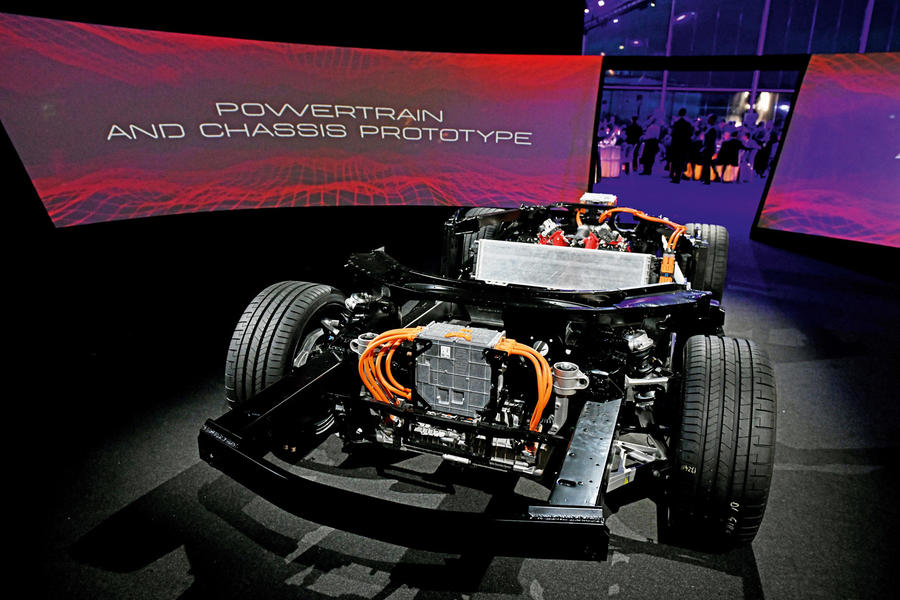 A front-wheel-drive supercar? Ferrari also went for a tri-motor set-up in its most powerful road car yet, the 986bhp SF90 Stradale plug-in hybrid. One motor works in tandem with the engine, while the others power the front axle for driving in electric-only mode, giving a modest zero-emissions range of 16 miles at speeds of up to 84mph. These motors are also supplied by Yasa.

Koenigsegg supercar due in 2020 with electrified 5.0-litre V8

It's an "ingenious" solution to a problem that need not exist: With technology shifting towards electric, transmissions on Supercars will eventually cease to exist. Plus, they're archaic and produce unnecessary heat and friction