The new DS 7 Crossback will kickstart a new model blitz by the upmarket French brand, during which it will launch a new car every 12 months for the next six years, including a family of SUVs.

Speculation suggests that the DS 7 Crossback, which goes into production early in 2018, will be followed by the launch of a DS 3 Crossback, to rival the Audi Q2. A larger Audi Q7 rival is then said to be under consideration if the current trend for booming SUV sales continues and could be badged DS 9 Crossback.

The SUV family will likely be complimented by a replacement for the DS 3 supermini, and more traditional medium and large saloons, potentially named DS 5 and DS 9. However, the latter is highly dependent on how the Chinese market's tastes develop with its traditional hunger for large, chauffeur-driven saloons waning.

While declining to be drawn on specifics, while talking about the potential for a small SUV DS UK boss Arnaud Leclerc said: "What's clear is that we need to find a way to keep DS 3 customers with the brand and offer them something as they move up. It's also true that the segment for small SUVs is growing. But nothing is decided."

DS vice president of marketing Arnaud Ribault added: "It's true that to develop we will need a family of SUVs and a family of saloons. But where that takes us in terms of sizes and the order of our launches is less clear. The DS 7 represents a start; tradition may dictate we follow it with one smaller and one larger SUV - why not? - but we haven't announced this."

The DS 7 SUV will be built and sold in China, alongside the smaller China-only DS6 model which has been sold there since 2014. The latter car is based on older PSA Group technology and as such cannot be sold in other markets as it doesn't meet safety requirements.

Opinion: the DS 7 Crossback should be the car that takes PSA back to America 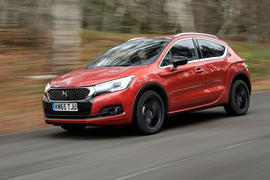 28 February 2017
I shouldn't worry about that pile, I've still yet to see one on the road

So much for premium

1 March 2017
"China-only DS6 model which has been sold there since 2014. The latter car is based on older PSA Group technology and as such cannot be sold in other markets as it doesn't meet safety requirements" So much for the premium brand.