From £8,3408
Cheapest Volkswagen gains spec changes for the new decade. At £12k, is it still one of the best city cars?
Open gallery
Close

Here we have the cheapest Volkswagen you can buy today. That also makes the Up 1.0 the most literal representation of a volkswagen – or people’s car – there is and therefore one of the most important models for the Wolfsburg company to get right.

When the Up first went on sale in the UK eight years ago, you could buy one for £7995. After a facelift in 2016 and now a mild update for the 2020 model year, introducing full WLTP compliance and a modest increase to the amount of standard safety kit, you can’t get one for less than £12,440. Or £12,840 if you want the inherently more practical five-door model, which seems a no-brainer.

You can’t save money by settling for a Skoda or Seat badge on your boxy little Bratislava-built city car any more, either – unless it’s an expensive electric one.

Inflation is partly to blame for that eye-catching price increase, of course, but of more relevance is the fact that today’s entry-level model (one shorn of a trim level name, having previously been known as the Take Up) is better equipped than it was back then.

New additions to the standard spec sheet include lane-keeping assistance, front and rear curtain airbags and a neatly designed smartphone cradle atop the dashboard to deal with your infotainment. After all, why add significantly to the price of a car by adding a touchscreen system when almost everyone will want to use Android Auto or Apple CarPlay anyway?

That’s in addition to the air conditioning, electric front windows (the rear pair still only pop out a few degrees) and alloy wheels – in this case, a particularly attractive 15in set (pricier models get 16in or, on the sporty Up GTI, 17in rims). 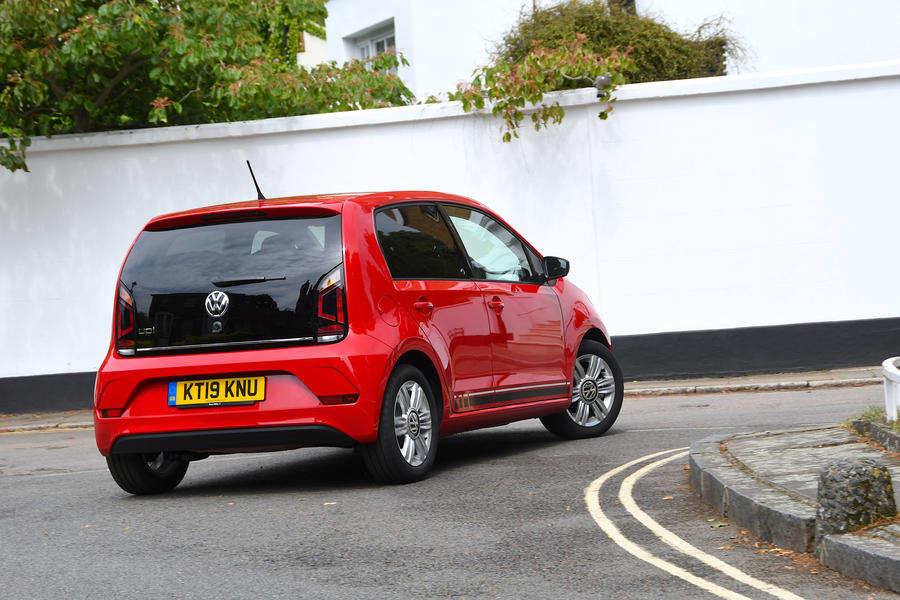 Excluding the electrically driven and tartan-trimmed versions of the Up, the 59bhp naturally aspirated 1.0-litre three-cylinder petrol engine – with the automatic stop-start and unnoticeable regenerative braking functions together known as Bluemotion – is your only option.

There used to be 74bhp and 89bhp versions of this thrummy motor further up the price list, but no more, presumably at least in part due to Volkswagen’s struggles with WLTP testing. It seems a shame that this was chosen to be the sole survivor of the trio, because it can be painfully slow.

Acceleration from 0-62mph takes 14.9sec, and that’s if you’ve got your foot to the floor and redlining it in every gear. So joining faster roads can be something of a struggle; it’s little wonder that the Up driver is particularly susceptible to bullying on the motorway.

Performance is, however, acceptable in town, where surely it matters most for a car of this kind. You could be forgiven for assuming the engine is a TSI turbo at first, because you can zip away from the lights through first, second and third pretty sharpish.

The most impressive thing, though, is the ride. There’s none of the jiggling or jolting over blotchy roads that you often get in city cars, although the relaxed spring rates do sometimes result in bobbing over big obstacles.

Another side-effect is significant roll in corners, but this isn't an issue, because the amount of grip generated at the front end is impressive – all the more so when you spot the 185-section tyres.

Indeed, the Up is still as nimble as you’d expect of a car with a wheelbase of just 2420mm, almost no overhangs and a kerb weight of less than a tonne, appearing almost to fly around corners, even at completely sensible urban speeds.

The steering is pleasant, being very light but accurate, so it's ideal for tight turns and parking manoeuvres, although it does understandably start to feel rather vague at faster speeds.

And the gearbox, while far from replicating the mechanical delights of, say, the Mazda MX-5's, has a less rubbery shift action and is easier to use than those found in some considerably more expensive cars from other mid-market brands.

Somewhat surprisingly, even this most basic Up doesn’t present a pervading sense of cheapness inside. Perhaps that’s because, rather than in spite of the fact that, large sections of brightly coloured bodywork are present on the doors, in combination with light-coloured sections of the cloth upholstery and the ‘Black Cube 2D upper dashpad’, a kind of carbonfibre-looking plastic panel on the dashboard.

In fact, the only real indicator of the low list price is the lack of any controls on the steering wheel, with the blanked-off button indents lending it the slightly disconcerting air of an unfinished portrait painting.

At least the media set-up next to it is respectable: a 5.0in colour screen, controlled by a row of physical buttons below and a dial either side, with slick software and DAB radio, Bluetooth and a USB connection. The latter is tucked away behind the neatly designed smartphone cradle, which adjusts for both width and height to keep your prized possession safe and steady and allow it to serve as your infotainment system.

You can download Volkswagen’s own app, Maps+More, to get a driving-friendly screen layout for the telephone, sat-nav, infotainment and media functions, as well as hints and tips about the car itself.

You can easily get comfortable up front, thanks to a cosy two-piece seat and a height-adjustable steering wheel, but visibility is the highlight, thanks to the combination of an upright driving position and truly enormous windows all round.

There’s just about space for two adults in the back, too, provided all three passengers aren’t of the larger variety, making this a perfect car for new drivers going out for the day with their mates. They’ll just have to make sure they pack light, because the boot is probably best described as piddly. 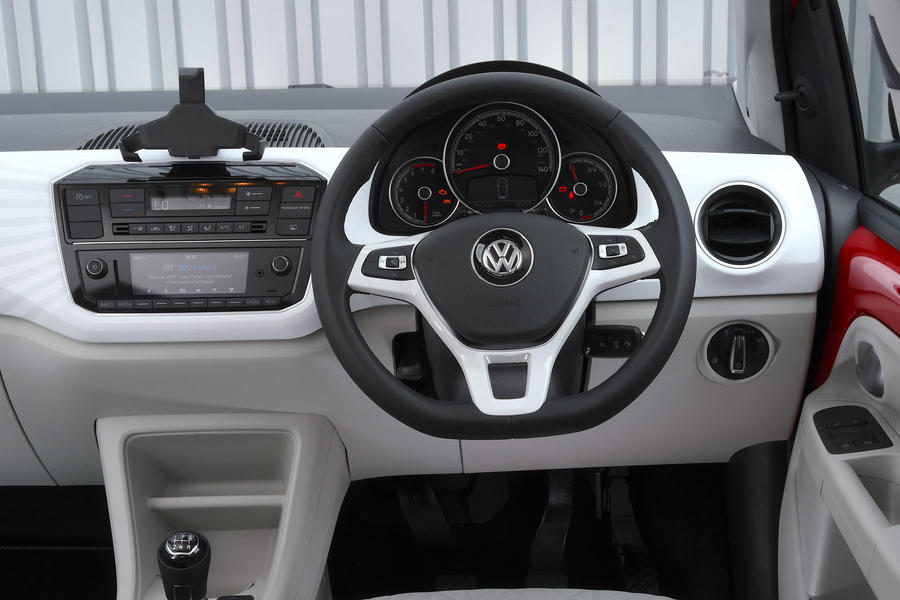 Even almost a decade on from its launch, the Up remains a completely competent city car with a cheery character that would no doubt make almost any new or urban-confined driver very happy indeed.

However, it does look much less like the brilliant bargain it once was, due not only to the price rise but also because of the arrival of objectively better rivals from Korea: the latest Kia Picanto and Hyundai i10.

It's also puzzling that Volkswagen recently decided to remove automatic emergency braking from the options list in favour of standard lane-keeping assistance. By anyone’s reckoning, the former is of far greater value in a car meant for the city. 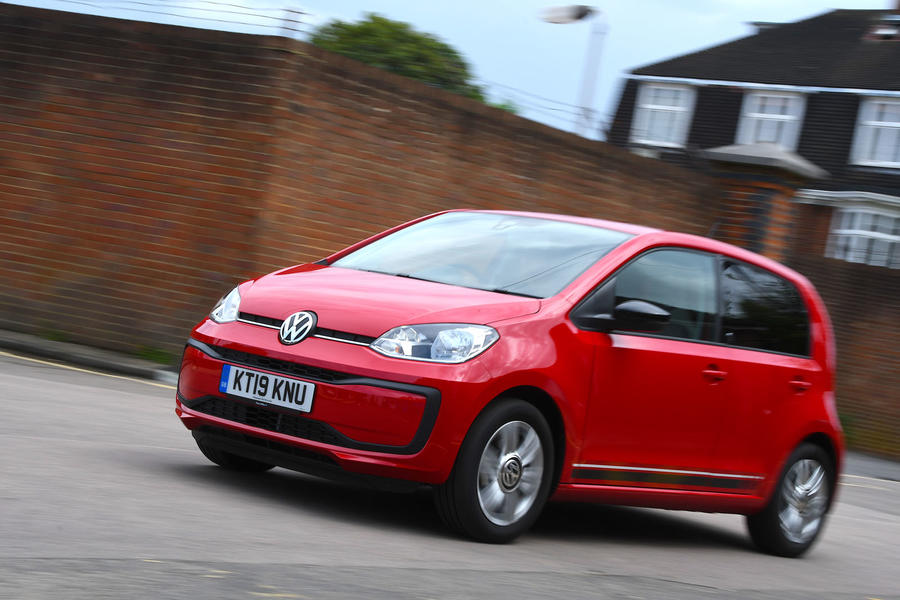 Getting too gadget laden?

I rented a very basic Up! on Shetland a year or so ago.  Great car, wonderfully basic: no aircon (unnecessary up there!) and none of the mass of electronic gubbins that it appears we are being forced to pay for on the new one.  And when you stopped to admire the views it didn't matter if you forgot to open the front windows before switching off the engine - they were manual.  Brilliant!  It was quiet, rode well and felt well made (no rattles).  Excuse the cliche but it really felt like all the car you really should ever need.

Surely it's the drop in the value of the GBP rather than low inflation thats increased the price?

I notice that the Up, Hyundai i10 and Citroen C1 are now all virtually the same price.  But the Volkswagen is listed as being in insurance Group 2E compared with the other two as group 7E.  The difference might be crucial for a young buyer - but it's good to see that small car buyers still have some choice!