6
Delivers on its concept with decent execution, but ultimately that concept is compromised in terms of driving dynamics and versatility
Open gallery
Close

You probably don’t want to like the new Volkswagen T-Roc Cabriolet, simply because of what it is: a convertible SUV. It hardly seems a winning combination.

Take a dynamically compromised, high-riding body shape, and remove the metal roof and two doors – stripping away much of its practicality while adding weight and reducing structural integrity. Where its creators doubtless see wind-in-your-hair fun and freedom, many car enthusiasts will see confusion and compromise.

But while Autocar readers are unlikely to be drawn to Volkswagen’s latest soft-top, the ongoing SUV boom (which has led to myriad other equally questionable machines) suggests plenty of buyers will be. And, leaving aside its concept, the T-Roc Cabriolet actually delivers a fairly decent first impression.

With the multi-layered fabric roof up, the familiar Volkswagen T-Roc styling largely remains in place. The biggest difference is the removal of the two rear doors, and the addition of 34mm to the car’s overall length, with the wheelbase extended by 37mm. What can’t be seen are the various strengthening measures in the doors and underbody to recoup some of the rigidity lost by removing the hard roof, and which also add nearly 200kg to the T-Roc’s weight. 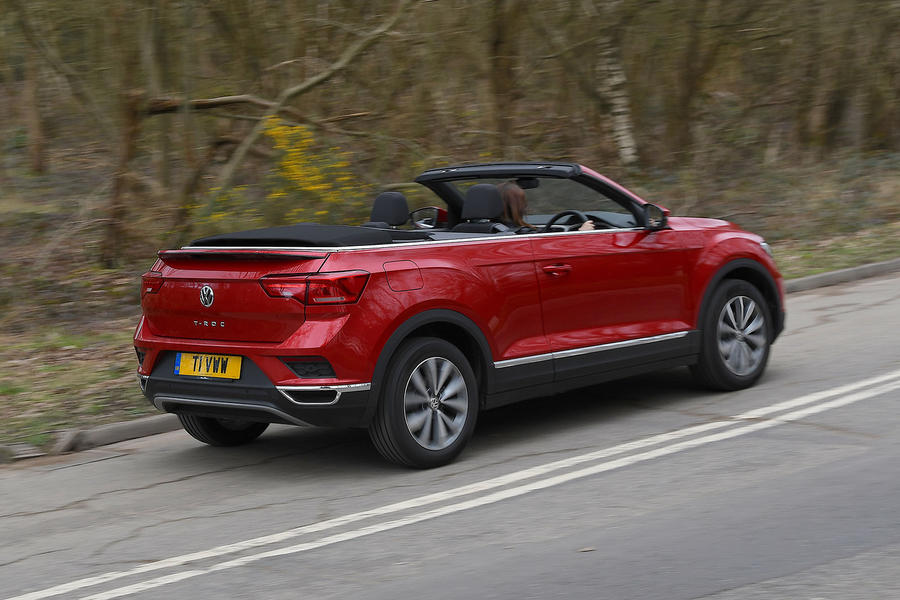 Inside, the plush cabin will be familiar to anyone who’s sat in a regular T-Roc – or, for that matter, any recent VW. The touchscreen is within easy reach, and the controls and layout are intuitive. Our test model’s R-Line trim added extra premium feel, with the likes of leather seats and brushed metal elements.

The driving position feels a bigger change: the windscreen is more steeply raked and the front roof edge a little lower, making it feel a little less spacious and more closed in. Adults sitting in the back will definitely notice the difference, particularly after they’ve clambered in through the three-door set-up.

The boot is another area of compromise, with space taken to stow the roof reducing it in size from 445 to 284 litres. Access is made difficult by a relatively narrow opening, although a hatch through to the rear seats does help with bulky items.

Lowering the roof, which retracts into that storage area in just 12 seconds at the touch of a button, removes much of the slightly hemmed in feel from the cabin. Still, roof up or down, the extra weight of the T-Roc Cabriolet can be felt in its handling and performance. The 1.5-litre turbocharged engine (a 1.0-litre is also available) pulls well enough, with 148bhp and 184lb ft of torque, but you have to work it harder to extract performance than in a standard T-Roc. Our car was fitt with the seven-speed DSG auto gearbox, and performs well in most situations, as long as you don’t ask too much of it.

And this isn’t a car you’ll want to push particularly hard. While the body roll is relatively well controlled, the ride is overly firm and unsettled, especially on bumpier roads. But ease off, relax and cruise more gently, and it’s far more in its element, especially on a pleasant day with the roof down. Even at motorway speeds, there’s relatively little wind buffeting when open to the elements. 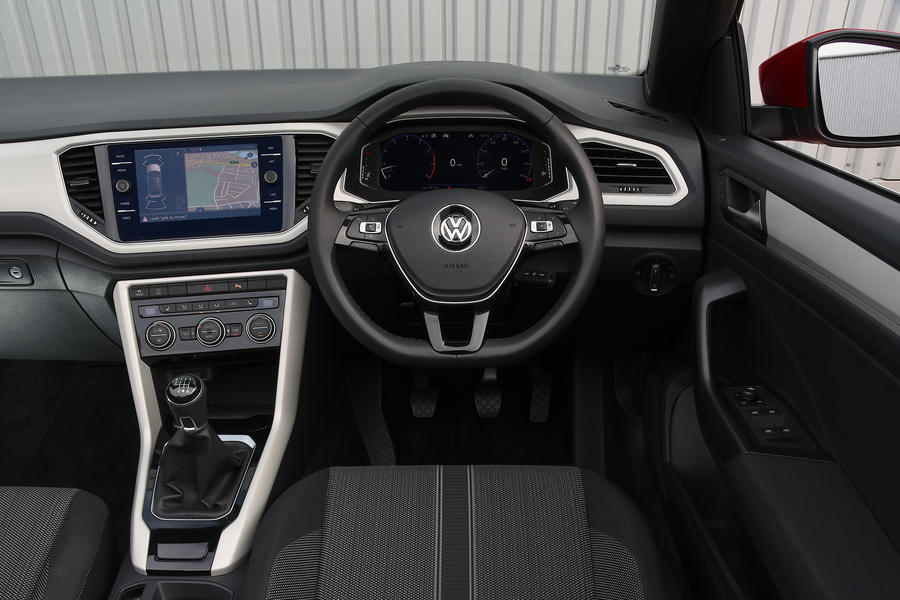 The T-Roc Cabriolet, then, is pretty much what you’d expect it to be. It is, emphatically, not a driver’s car. But even if you question the idea of a soft-top SUV, you have to respect that Volkswagen had delivered on that brief with conviction.

Perhaps because these are, as we’re constantly being reminded, ‘difficult times’, but after driving it it’s hard to hate the T-Roc Cabriolet’s earnest execution of a wholly frivolous concept. It’s supposed to be fun and, in this lockdown age, a bit of carefree frivolity seems mildly appealing.

Still, viewed objectively that doesn’t make up for the compromises inherent in its basic concept. But you sense those compromises won’t matter much to those people attracted to a soft-top SUV in the first place. 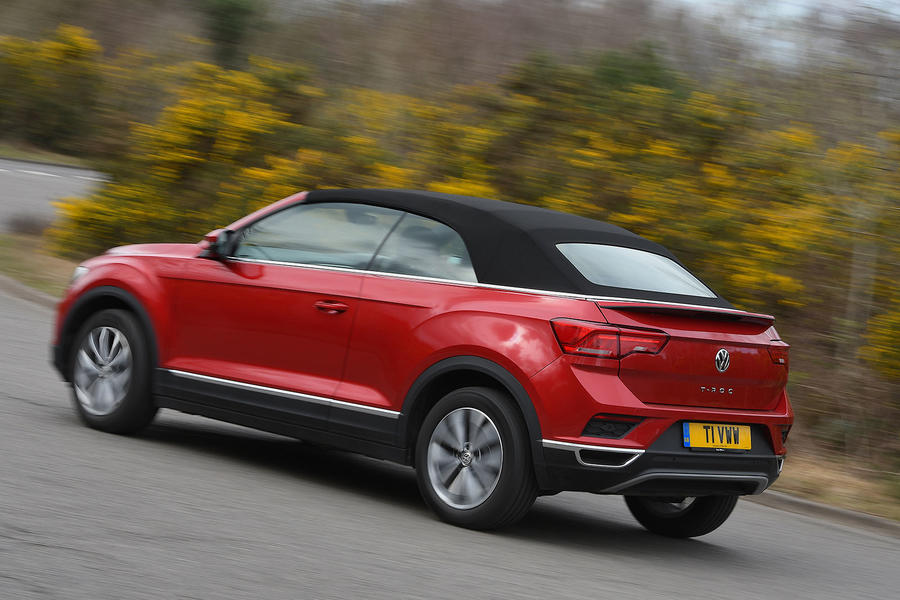 I was walking past a JLR dealer's the other day which had an Evoque convertible on the forecourt - only the second one I'd ever seen - and I stopped to have a gander. I'd previously read the various articles in the motoring press about that vehicle's pointless, compromised existence, enthusiastically confirmed by Joe Public in the comments' sections, but as I took in its rather handsome lines (which would probably be lauded if they were German or Italian, but instead, being JLR, attract the usual negativity), I kinda 'got it'. It's not meant to be a sports car; it's not meant to be a serious mud-plugger; it's not meant to be practical; it's not meant to even make sense: it's meant to be a bit of fun for someone who wants something different. In concept I saw it almost as a very posh beach-buggy or mini-moke for those who can afford such luxuries. The VW is just a cheaper version, less handsome (looks best with the top up), and just as 'non-sensical', and if it floats your boat and suits your purpose, great ... buy it. Vive la difference!

In Yorkshire for a car enthusisast?  No.

As a vehicle based in a sunny med marina as a yacht support vehicle for day trips?  - Perfect (and you'd be surprised how many of those there are!!)

In Yorkshire for a car enthusisast?  No.

As a vehicle based in a sunny med marina as a yacht support vehicle for day trips?  - Perfect (and you'd be surprised how many of those there are!!)

Didnt realise there were so many Mediterranean marinas without paved roads in the middle of the countryside that needed cars with higher ground clearance to access them, you learn something new everyday.