9
Volkswagen’s first proper attempt at a ground-up EV has a familiar depth and variety of qualities. Still unfinished for now, but undoubtedly a car to watch
Open gallery
Close

The Volkswagen ID 3 might be the most important new car built by the world's biggest car maker in decades. It certainly has had an epoch-making billing.

VW’s first age, its management claims, was defined by the car that the company was named after. Its second has been symbolised by the car that had been, until last year, the firm’s biggest-selling model since the 1970s: the Volkswagen Golf. Now, they say, it’s time for chapter three. Step forward, then, the Freudian wunderkind.

They’ve said such things before, of course. Ferdinand Piëch famously wanted to move the brand upmarket throughout the 1990s and 2000s, but his engineering passion somehow ended up benefiting the VW Group’s sister brands more. Remember the fuss made about the family of Up concept cars that appeared in the late noughties? And, more recently, the move back towards upmarket territory again with the Atlas, Phideon, Volkswagen Arteon and current Volkswagen Touareg? All were supposed to be the beginning of a new VW. Somehow, none were.

This time, though, the new dawn might just rise, particularly if necessity proves to be the mother of reinvention. The all-electric VW ID sub-brand is now close enough to touch. Having set out an electric-car investment plan unparalleled in the global automotive industry, VW will unveil the first of 10 all-new, ground-up EV passenger cars due by 2025 at the Frankfurt motor show this September. It’ll be a roughly Golf-sized five-door hatchback called ID 3.

And, having now driven one, I can tell you that it’ll be interesting for all sorts of reasons: for its all-round compactness, its rear-engined-ness, its clever packaging, its urban manoeuvrability, its zappy yet quiet performance, its cutting-edge instrumentation technology and its uncharacteristically (slightly) bold styling. There is, of course, also the small matter of being able to charge it up at home, run it entirely emissions free, and do your bit for the ‘road-to-zero’ carbon-cutting agenda. 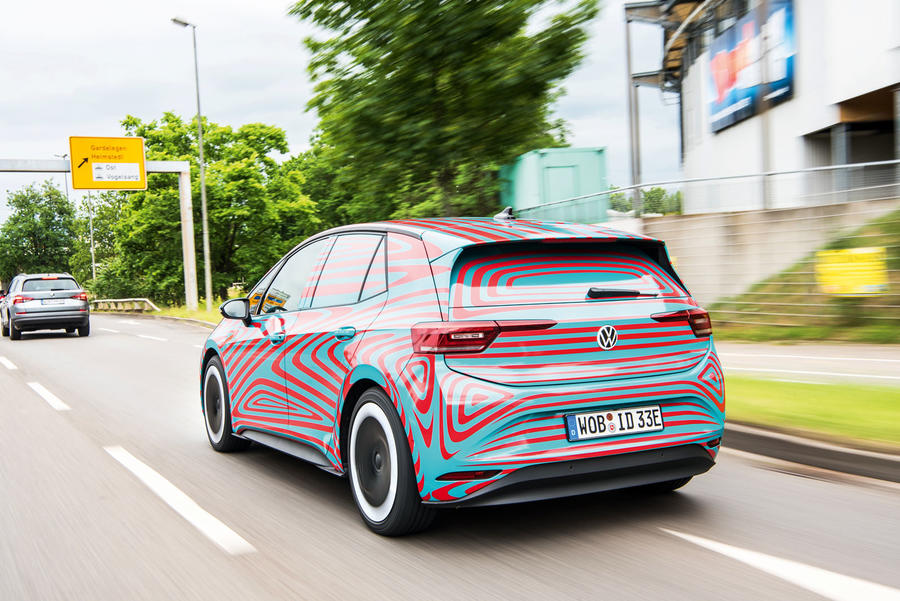 It was with a tangible sense of momentousness, then, that we seized an invitation to go to Wolfsburg itself to drive a “camouflaged” (well, not very) prototype of the car that represents VW’s own vision of its future.

Our ID 3 had an interior disguised so attentively that we needed an auxiliary speedometer to avoid a speeding fine. Its driving experience only represented a standard of production readiness “of between 70% and 80%”, according to our engineer-cum-chaperone. But it did have the middle-sized, 58kWh version of three available battery packs, and the more powerful of two available electric drive motors.

As is now applicable almost universally to new EVs, the ID 3’s heavy lithium ion drive batteries sit under the cabin floor. That’s the principal reason why VW can claim a perfect 50:50 weight distribution for a rear-engined car – although bigger MEB-based ID models will be able to offer four-wheel drive by simply adding another smaller drive motor and gearbox onto the front axle.

But while that battery layout is widely championed as the way to resist compromise to both interior packaging and handling dynamics in an EV, that’s not absolutely true in the ID 3’s case. Even though this is a fairly tall hatchback, it’s one with a pretty average amount of head room. For a 4.2-metre car, however, it has remarkable leg room, thanks to a wheelbase that’s nearly 2.8 metres long: 130mm longer than that of a MkVII Volkswagen Golf.

The car’s profile is high, cabin-forward and quite aerodynamic-looking. Although styled very differently, it puts you in mind of the proportions of the BMW i3 – which, given it’s another compact, rear-engined EV, would make sense. The ID3 is a size bigger than the BMW, though, and an order more conventional-looking, with properly usable back seats and a decent boot.

The ID3’s two-tone, grey-on-crème cloth front seats were one of the few uncovered parts of the interior that we could look at. They seat you in a pretty unremarkable but sound driving position, at a steering wheel of a good size; but you look out through a steeply raked windscreen, and over a particularly short bonnet that drops away quickly out of sight. Both of those facts make it harder than you expect to judge the forward extremity of the car, and to get a good, instinctive feel for its size in traffic.

Answering why VW went for such a ‘fast’ windscreen on such a compact car aside from the obvious aerodynamic reasons, our chaperone told me they simply needed a lot of space on the top of the dashboard to accommodate the car’s giant-sized head-up display. That will be used to project augmented-reality navigation arrows, hazard alerts and pedestrian detection right onto the underside of the windscreen in top-of-the-range versions.

Much as it would be over-simplifying to suggest that sounds like putting the cart before the horse where car design is concerned, it’s certainly evidence that we’re now well and truly in the age of the all-pervading primacy of in-car technology. At the time, I couldn’t think of another example of driver display technology influencing the exterior design of a production car in quite the same way – and I still can’t. And at that cost, I’d want it to be the very best augmented-reality head-up display in the world. Since it’ll be the only one such system, we can at least take that for granted.

The ID 3 is quiet, brisk, responsive and particularly easy to drive around town, which is exactly how the vast majority of EVs that we report on are. The 201bhp and 229lb ft outputs produced by the electric drive motor feel like plenty to get the car up and away from low speeds quickly. But, because that torque is so accessible and motor response is so good, you seldom use more than half-throttle in the car. Oddly, the ID 3’s urban performance superiority actually ends up just allowing you to relax and take it easy the vast majority of the time – and that suits the general vibe of the car very well.

The car has medium-paced, fairly light steering, although because it has such a lot of steering angle, there’s approaching three-and-a-half turns between locks. This makes it feel ideally suited to car parks, traffic islands and junctions. With that much steering angle, you never need two bites to get in or out of a parking bay, and seldom need to reverse either when needing to U-turn at a T-junction. The ID3 is a real champion of manoeuvrability.

It’s also an agile car at town speed, with strongish grip levels and good lateral body control, and is well capable of a keen change of direction when you need one. It doesn’t quite match the darting, gap-grabbing fleet-footedness of a BMW i3, but is still well at home in city traffic. Moreover, it also has that sense of measured, natural responsiveness in everything it does that so often marks out a VW, and that makes for such easy, top-level drivability.

Fluent but effective vertical body control and a supple ride are also dynamic qualities you also expect from a VW, but they’re not always to be found in smaller electric cars with lots of mass to keep in check. They were hard to assess on our short, low-speed, trunk-road test route, but there was enough evidence to suggest that there’s still work to be done to make the ID 3 – which comes on wheels up to 20in in diameter – hit the company’s familiar high standards on ride sophistication. Our test car had a slightly busy, though not overly noisy, secondary ride, though the fine-tuning of its dampers could well have been an outstanding item on the engineer’s to-do list.

Real-world battery range is another facet of the car’s performance that’ll have to wait to report on with any certainty. Our 58kWh test car started our test with just over 300km of range indicated on what looked like about a 90 per cent state of charge. But it may have been estimating that range conservatively, having been driven fairly hard – because when we finished our test, which lasted about 40 miles in urban traffic, the battery was still showing around 75 per cent charge, and around 280km of available range. On that basis, everyday autonomy of between 200- and 250 miles, depending on specific usage pattern, seems realistic. And that's from the middle-sitting battery size, remember: the 77kWh version ought, on this evidence, to be a 300-mile EV with plenty of room to spare. 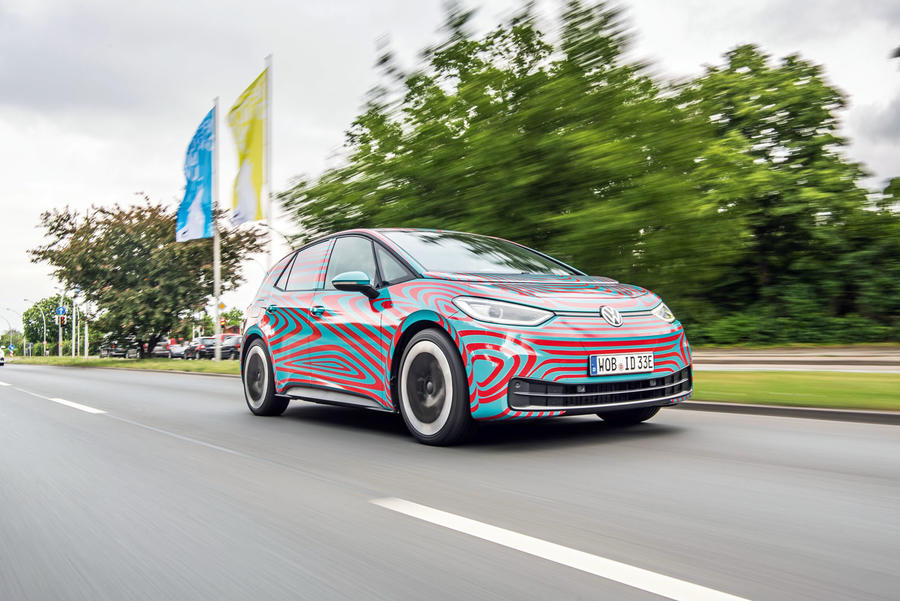 Well, fine ride tuning aside, there can be little development left to do to make the ID 3 ready to impress both EV converts and nervous internal combustion exiles alike; and, perhaps unlike a Tesla or a Nissan Leaf, that’s precisely what a Volkswagen EV will need to be able to do.

The most encouraging sign we gleaned? That this isn’t just a credible new EV, but an interesting small car with plenty else besides zero emission to recommend it, and feels like an authentic VW to boot.

Perhaps the ID 3 might just be everything the management are building it up to be. On very early inspection, it certainly seems good enough – assuming the world is ready.

The man yet again makes a

The man yet again makes a fool of himself by giving a score to a car he hasn't reviewed.

It is nice information and you explained in a nice way. Thanks for sharing this.  Want to know more about the latest apps? Here you will get the best apps to update your android mobile. https://www.basictricks.net/android-lollipop-5-1-update/

In terms of styling, this promises to be as memorable as the original Golf. Let's hope that, as a complete package, this ID3 is as successful as the Golf.
View all comments (9)