From £21,3367
Reborn crossover stands out in ways unfamiliar to the Vauxhall brand. We drive one on UK roads
Open gallery
Close

This isn’t the first time we’ve heard that the days of the unremarkable Vauxhall are behind us. But if the new Mokka is any indication, that statement may finally be true.

The compact crossover has been reborn for its second generation, dropping the questionable ‘X’ from its model name and adopting radical new styling that promises to eventually influence the British brand’s entire line-up. It will, for the first time, also be sold in pure-electric form.

Such a departure from what came before may seem bold, seeing how popular the first-generation Mokka eventually became with customers. It found more than a million homes across Europe after its introduction in 2012, including more than 200,000 here in the UK. But this is an intensely competitive corner of the market, with rivals that are increasingly style- and technology-led. Bold is exactly what was called for.

Much of the Mokka’s looks are carried over wholesale from the 2018 GTX concept car, including the new, minimal front grille Vauxhall calls the Vizor. It’s this fully sealed panel, which scoops up the headlights and simplified griffin badge into one element, that you can expect to see on future models. It’s also functional, helping direct air around the car and reducing the drag coefficient from 0.35 of the old model down to 0.32 here.

Style is subjective, of course, and the contrasting roofline accents won’t be to all tastes, but there’s no question the new Mokka stands out in a way the old one never did, and can arguably now rival the likes of Ford’s Ford Puma for head-turning ability.

Underneath, the Mokka is the latest model to be built on the PSA Group’s common modular platform (CMP), joining the Peugeot 2008, DS 3 Crossback and Citroën C4, as well as Vauxhall’s own Vauxhall Corsa supermini. These new underpinnings have helped reduce weight by as much as 120kg compared with the outgoing car, while steel construction has increased body rigidity by 15% on ICE models (and as much as 30% on the Mokka-e). It sits some 124mm shorter than the outgoing car, but 10mm wider and with a 2mm longer wheelbase. Significantly shorter front and rear overhangs help give the car a more dynamic stance, without compromising on interior space.

Powertrain options are shared with the Corsa, meaning a choice of two petrol and one diesel engine, as well as the pure-electric variant. The 1.2-litre three-cylinder turbocharged petrol is available in 99bhp and 128bhp outputs, but only the latter can be combined with an eight-speed automatic transmission. The entry-level petrol and 1.5-litre 108bhp diesel are restricted to a six-speed manual gearbox.

Our test car, an Opel-badged left-hooker, was closest to a step-up SRi Nav Premium, which gains front and rear parking sensors, built-in navigation and an uprated infotainment system. 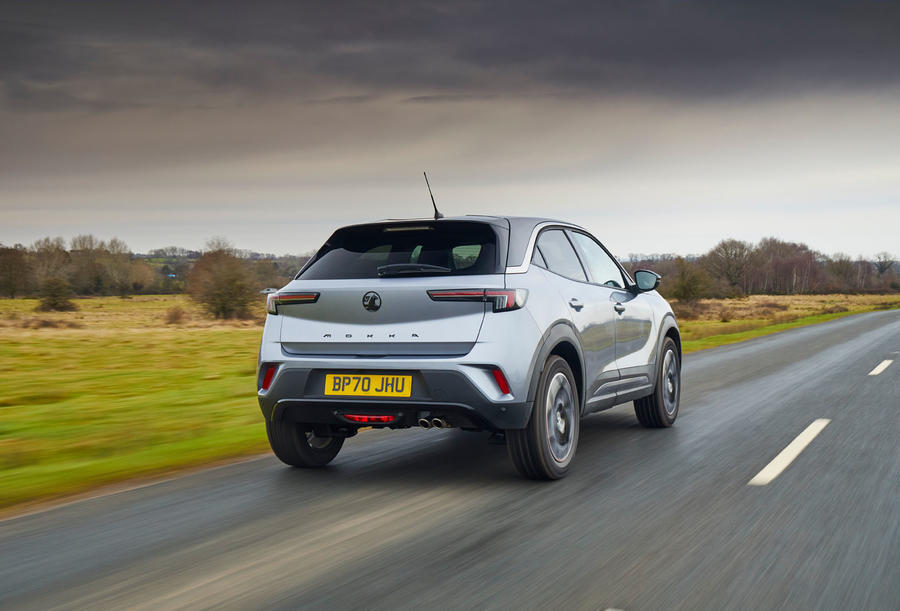 It’s this double-display digital dashboard, known as the ‘pure panel’, that acts as centrepiece to the more driver-focused cabin. The curved binnacle links the instruments and infotainment touchscreen in a way that’s very reminiscent of recent Mercedes models; entry-level variants get twin 7in screens, while higher trim levels get a 12in instrument cluster and 10in touchscreen.

The interface may not be as customisable as some rivals’, and the graphics, while sharp, aren’t the most detailed, but still feels like a big step forward from Vauxhall’s previous efforts. All models get Apple CarPlay and Android Auto as standard, too.

The centre console has been stripped back to the essentials, which thankfully still includes physical climate controls, and despite a fairly low-slung driving position, everything is within easy reach. The lack of buttons does mean you can’t help noticing just how much glossy black plastic has been used, though. Materials quality seems decent enough, but this still reminds you that the Mokka’s new-found sense of style isn’t enough to push it into premium territory. 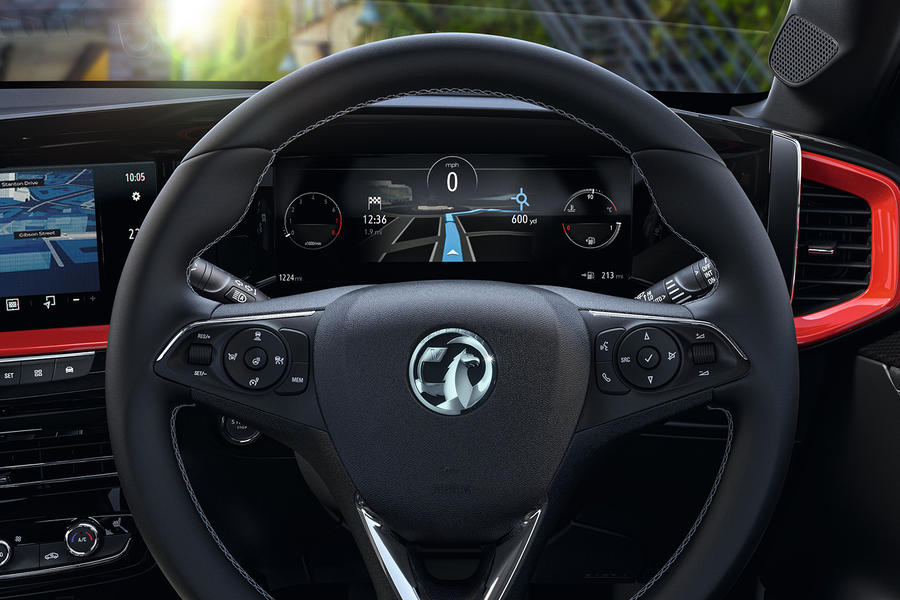 On the road, PSA’s familiar 1.2-litre petrol engine is well-suited to a car of the Mokka’s size, and is refreshingly quiet at city speeds and only getting vocal when you work it hard. The eight-speed automatic isn’t especially quick on the downshifts, either using the wheel-mounted paddles or relying on the pedal kickdown, but still feels more responsive at junctions and traffic lights than recent VW Group efforts. It’s surprisingly keen to hold onto gears under heavy acceleration, too.

The Mokka has the typically light steering we’ve come to expect from most compact crossovers, making them easy to manoeuvre around town but giving keener drivers little in the way of feedback as to what the front wheels are up to. Still, it manages to avoid feeling over-assisted like the Peugeot 2008, which has to compensate for its shrunken steering wheel. Body control is tighter than that of the electric Mokka-e, largely thanks to the lack of around 300kg of batteries, and it holds on rather well through the corners, though anyone searching for dynamism is likely to be better served by a Ford Puma - or simply avoiding compact crossovers altogether.

Vauxhall cars are typically on the firm side, but the Mokka’s well-balanced ride was a pleasant surprise. It refuses to be unsettled by minor road imperfections and rough surfaces, with just the smallest of vibrations transferred to the cabin. It’s less adept at shrugging off larger ruts and bumps, but no more so than its Peugeot stablemate. 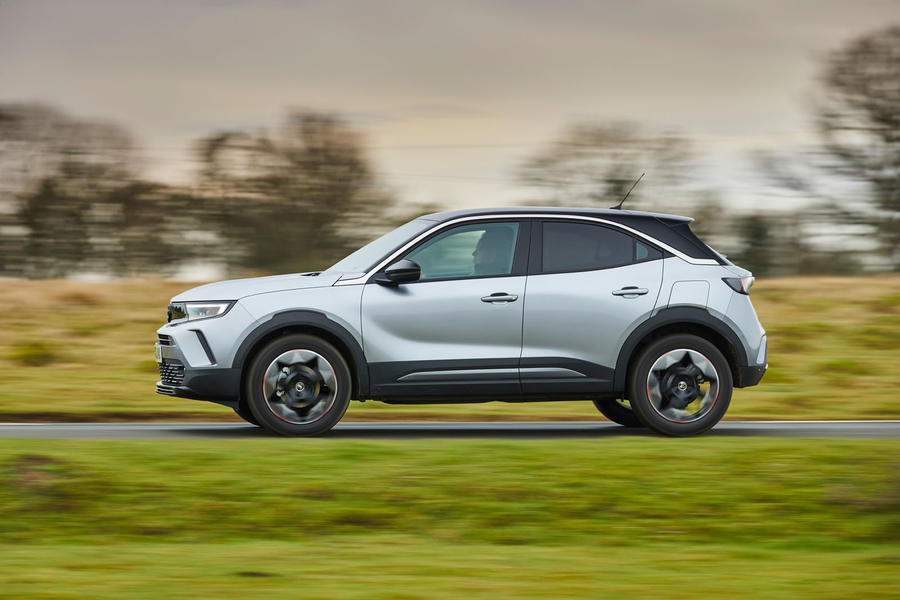 Unlike its electric counterpart, the petrol-powered Mokka has no shortage of rivals. First impressions suggest that, while enjoyable in isolation, it isn’t the most engaging compact crossover - that honour still goes to the Ford Puma.

Instead, it’s the combination of equipment, practicality, pricing and standout styling that is sure to resonate. And for a class where driver appeal is rarely top of customer wish lists, that may be all that matters. 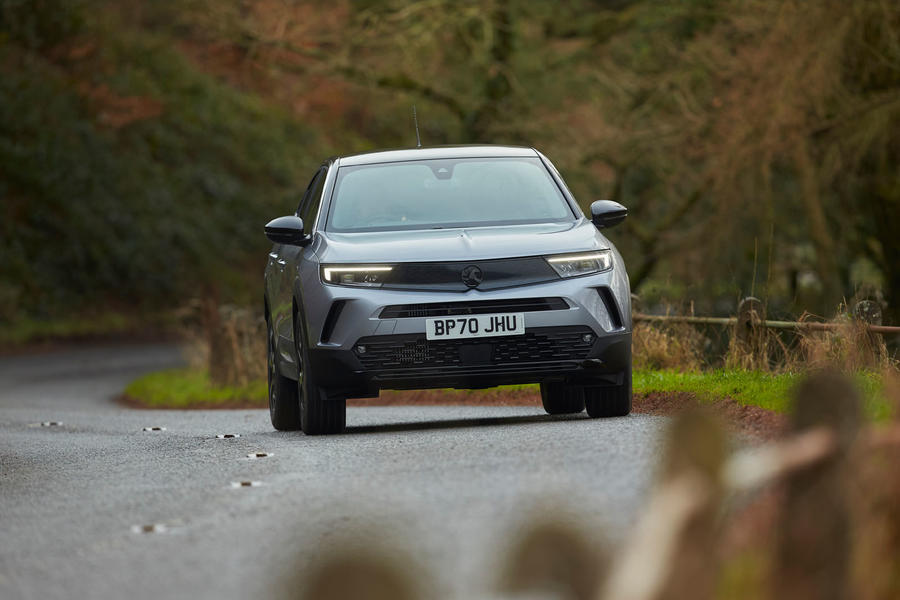 Agree this is a stylish & classy car, both inside and out. I get FastRenaultFan's point about the front of this SRI model, however. The black styling pack looks good, though would have retained the chrome Griffin logo as a focal point. Various commentators have compared the chrome-logo 'visor' to the 70s Manta; this blacked-out version reminds me more of the 60s Viva GT.