From £46,6506
Plug-in hybrid Vauxhall is short on desirability and isn't the driver's car you might imagine, but its fleet suitability and its timing could still be saving graces.
Open gallery
Close

The Vauxhall Grandland X Hybrid4 may be all the evidence you need that the car business has finally gone totally, irrevocably bonkers. It would, after all, appear to be a mid-sized crossover SUV from a traditionally value-oriented volume car brand, with no more usable space in it than is offered by a traditional family hatchback, and that you might quite reasonably expect to cost something around £25,000. And yet, in the case of the range-topping version we tested, it comes with near-£50,000 showroom list tag. Cue the incredulous expression.

Thankfully for Vauxhall, appearances can be deceptive; and very few people, if anyone, will ever pay anything like £50,000 for this car. Funnily enough, those who do run a Grandland X Hybrid4 may even be doing so because it’ll save them money. Welcome to the topsy-turvy fleet car market of the new decade.

Under the UK government’s new 2020 company car tax rules – which are about to make just about every fleet car in the country that isn’t in some way electrified a whole heap more expensive to run – a company car driver will be able to run one of these for considerably less monthly benefit-in-kind tax outlay than they may currently be paying for, say, a mid-range diesel-engined Nissan Qashqai. And if your employer provides a work car for you as part of your employment contract, of course, benefit-in-kind tax is all you pay for it.

What’s more, thanks to a Business Edition trim level pitched considerably more cheaply than was our test car’s and intended almost exclusively for the fleet market, this car will actually cost less than most of its closest plug-in hybrid SUV competitors – the Mitsubishi Outlander PHEV, BMW X1 and Volvo XC40 included. Better just to ignore that massive red herring list price, then, because while people buying on finance with their own money are unlikely to flock to this car, plenty of fleet managers will.

And what those fleet managers will be getting is a version of the Grandland X, itself Vauxhall’s sister car to the Peugeot 3008 and DS7 Crossback, that’s powered by a 1.6-litre turbocharged petrol engine but also by a pair of electric motors. The combined ‘total system outputs’ of all three power sources are a very healthy sounding 296bhp and 383lb ft of torque: enough to make for a sizeable relative performance advantage for this car when judged against its newbie plug-in hybrid compact SUV rivals.

The car has a 13.2kWh drive battery which makes for 35 miles of WLTP-certified EV range, and also delivers the sub-50g/km WLTP lab test emission needed to make the car stack up as a fleet money-saver. On paper at least, then, it has surprising performance and efficiency credentials. 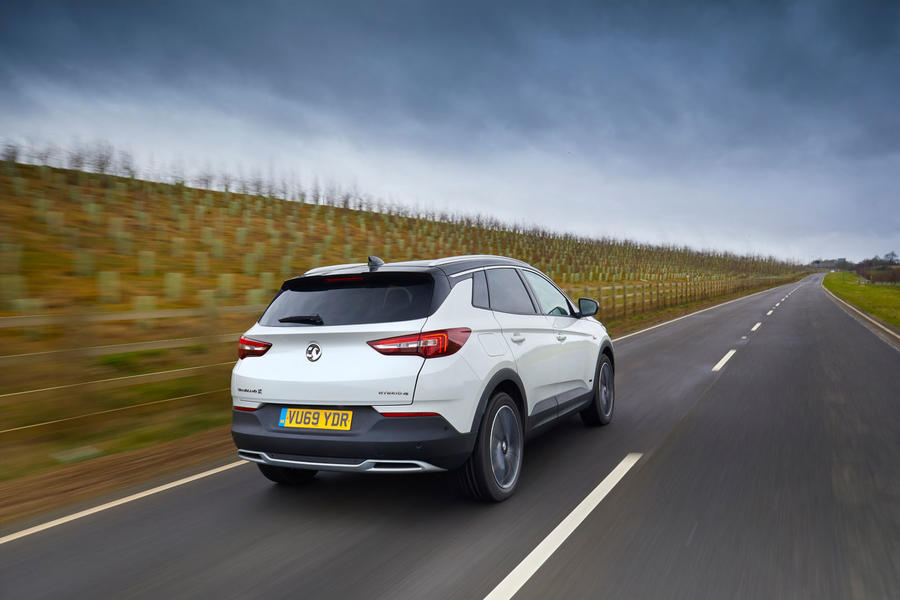 Not what you might think of as a traditional or typical fleet option, for all sorts of reasons; but then, thanks to the influence of a couple of decades of older company tax rules, the UK fleet market is not the trusty, predictable old Kansas it once was. If you, like me, still instinctively think of a company car as one half of a two-car family transport double act, supplying the long-distance working-week daily-drudgery transport for the breadwinner and then being filled up with kids and stuff for longer-trip weekend family duties, the Grandland X Hybrid4 won’t really fit the mould you’ve got in mind. But then, as Vauxhall might say, perhaps your mould of thinking is in urgent need of remoulding.

In that traditional two-car paradigm, of course, the UK current CO2 taxation framework doesn’t seem to make much sense either, because it puts the weight of the tax burden on the big, long-distance company car to go electric or ‘plug-in’ first (when the technology still isn’t generally well-suited to longer-distance applications) and not nearly enough impetus anymore through VED road tax on the family’s smaller, likely privately owned short-hopper second car to do so (which, ironically, would be so much better-suited to electrification in the first place).

Plug-in hybrids are, after all, still less fuel-efficient than an equivalent economical diesel on longer schleps; and so by effectively encouraging us to switch what might well be the wrong car on any given family’s driveway to electrification, or simply to opt out of the fleet system entirely as an increasing number of drivers are, we might very well currently be hastening global warming instead of arresting it.

That’s a criticism of the instruments of current UK and European government policy, though; and Vauxhall can’t really be blamed for designing a car for the current rules of the game, however misconceived they may be. Like several other manufacturers, it is introducing a plug-in hybrid compact SUV which could hardly be better configured to sell based on current market trends, tastes and influences. Much as it might make a problematic replacement for, say, a diesel-engined Insignia estate owned by a 30,000-mile-a-year photocopier sales rep then, the Grandland X Hybrid4 ought certainly to appeal to families who’ve long since switched the roles of the protagonists on their two-car driveways, and have a privately owned ‘family bus’ to be used and abused on errands great and small the week around, and a smaller, less traditional, more modern fleet option to compliment it.

Judged in that context, the Vauxhall’s slightly pokey second-row seating certainly seems less of a barrier to its success. It’s practical enough for smaller adults in the back at any rate, and has a reasonable-sized boot – although it isn’t the sort of car a family would ever consider taking on holiday.

The lack of the sort premium-brand appeal that you’ve a right to expect for the price remains a barrier, though, and a pretty sizable one at that; and while the car’s plain, dark and quite plasticky interior might be okay for the fleet market, it won’t endear it to private buyers any more than the price. The Grandland X’s infotaiment technology looks equally out of place at a premium-level price point as its perceived quality does.

The driving experience will have plenty more to recommend it to a fleet driver who’s swapped a pretty run-of-the-mill diesel-engined crossover hatchback for it than to a retail buyer who’s signed up to a surprisingly expensive PCP deal, but the good news is that the car has the refinement and drivability to make a strong first impression on anyone.

It starts on electric power by default except when the drive battery is flat and even if you’re using hybrid driving mode, and is driven primarily by its rearward, single-speed electric motor at low speeds. It feels responsive, smooth and powerful enough around town to come across, in many ways, just as a fully-fledged EV might. There’s a satisfying amount of urge that feels as if it’s just under your right foot; you rarely rouse the combustion engine unless you mean to; and there’s plenty of accessible speed available to you.

The slickness of the driving experience deteriorates somewhat as you leave town, though, as speeds increase and as you give the car’s chassis more to do. Here, the harmonisation of the car’s combustion engine and its electric motors leaves a bit to be desired; the former seems to answer slowly and reluctantly to big demands for power, and you end up with slightly odd, successive-stage responses to your right foot, with the piston engine and transmission needing a second or two longer to chime in with any urgency than the electric motors.

Drivability is not what it ought to be, needless to say, and the paddleshift manual mode for the transmission improves matters slightly, but can still feel slow and clunky. Although the car is certainly brisk both at full pace and feels very torquey from low speeds, then, it’s not blessed with the sort of powertrain you’ll stoke up too often for the fun of it. The engine doesn’t sound keen to work at high revs and isn’t particularly enticing in sport driving mode.

The Grandland X Hybrid4’s ride and handling both evidence the impact of the car’s 1.8-tonne kerbweight and its raised ride height. The car is tidy enough and dynamically competent at everyday speeds, but its body control is easily upset by vertical ridges and quick to shimmy laterally its axles are unevenly exercised.

When cornering, much as it doesn’t roll to extremes, it has a slightly alarming tendency to list quite quickly onto an outside wheel just as you turn in, which is curiously unsettling to experience. The steering’s medium-light and medium paced, but not particularly accurate nor tactile. And so while it’s inoffensive and comfortable enough to drive over most surfaces most of the time, it’s quite plainly no driver’s car and seems restricted by the nature and makeup of its powertrain in as many ways as it is enhanced by it.

Fuel economy might be either very good or pretty average, depending on how you use the car and how you think about it. Electric range turns out to be around 25 miles in mixed real-world use, and so on a UK-typical 60-mile daily office commute, with a charge at both of its end, the Grandland X Hybrid4 might well return a regular 80-90mpg, depending on your driving style. But once the battery’s flat, the car struggles to average 35mpg running on petrol power alone; and if you’re used to 45-50mpg on longer days in the car from your old diesel crossover, that’s inevitably going to be fall well short of your expectations. 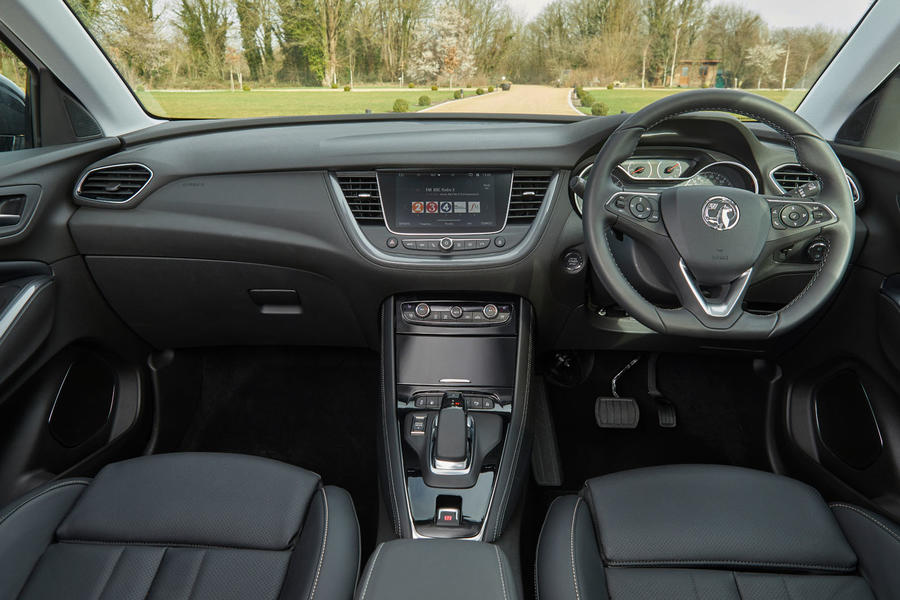 There’d certainly be very sound financial sense in picking one off your company car list should the option present, at least in favour of anything conventionally powered. In comparison with other 'PHEVs', though, the car holds less appeal.

The Grandland X Hybrid4 might be one of the first cars of its size and kind to hit the UK market. It might end up being one of the better priced, at least to fleet users; and unexpectedly enough, it might also be one of the fastest. But I wouldn’t expect that it’ll prove itself to be one of the best. It doesn’t feel too sophisticated or finely-honed to drive, it isn’t desirable like a BMW or a Volvo, it isn’t particularly roomy or versatile and it doesn’t have the appeal of a truly premium product either.

And it may very well be that, for a while at least, none of that will matter – because just being available as a plug-in hybrid right now, in a growing part of the car market, may very well provide all of the demand that Vauxhall can cope with and more besides. 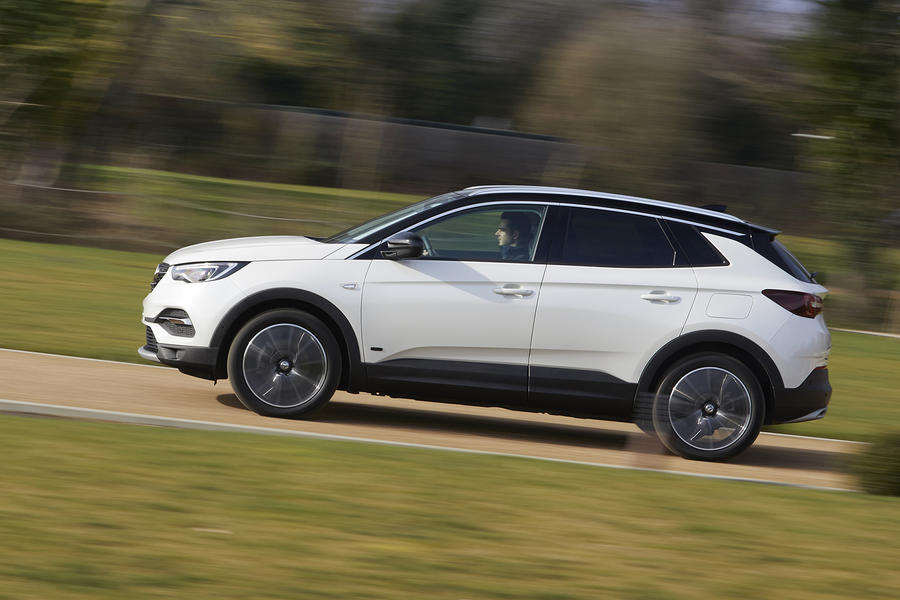 " ...it isn’t the sort of car a family would ever consider taking on holiday."

These look like quite a big car to me, how much space do people need?

Seems to me Autocar was quite generous with their rating considering the car has virtually no USP, is as expensive as its premium rivals, rides and drives below average, is relatively small, has one of the worst interiors in the market etc...

But this car is actually a handsome thing, and it will probably make a good used purchase in a few years - especially if the pricing falls off a cliff like Insignias and other Vauxhalls do. Why is the infotainment screen so small, though!?! Surely for a car approaching £50k they could have plonked a bigger screen in the dash?!