BACK TO ALL NEWS
Currently reading: Vauxhall Grandland X to compete with Seat Ateca
UP NEXT
Fisker goes radical with Pear EV SUV

The Crossland X small SUV will fill the void left by the departing Meriva in Vauxhall’s 2017 line-up; it'll be joined by the Grandland X large SUV and three Insignia variants
Open gallery
Close

The Vauxhall Grandland X will be the brand's answer to the Seat Ateca and Nissan Qashqai and other mid-size SUVs when it is introduced to the line-up in 2017.

Vauxhall hasn't released any other details on the large SUV aside from the fact that it will feature the usual qualities and attributes of a large SUV. Nor has it said if it will be a seven-seater, although the Grandland X is highly likely to get a third row of seats. A preview image shows the top of the car but gives away very little of the styling.

A smaller sibling, the Crossland X, has been confirmed as a new compact SUV due to sit above the Mokka X in Vauxhall's 2017 line-up, and is one of five new models to be added.

The Grandland X is likely to be revealed during the second half of 2017, as the Crossland X will come during the first half. A Frankfurt motor show debut is expected, but not confirmed.

Next on the agenda after the Grandland X will be a commercial vehicle, another car sharing a platform with PSA Group cars in GM and PSA's latest tie-up.

The Crossland X is described as a family-friendly urban vehicle “with enough comfort and performance to cover long distances at the drop of a hat”, suggesting it will fill the gap left by the outgoing Meriva MPV and sit below an upcoming Zafira-sized SUV that's also due next year.

Alongside these two new SUVs in 2017 will be three variants of the all-new Insignia. The first, the flagship Insignia Grand Sport, will be a five-door hatchback with a coupé-like roofline and, in top-end models, four-wheel drive. Autocar recently sampled a prototype version of that car's system at a GKN event.

The second model will be an Insignia Sports Tourer, which will take influence from the design of the Monza Concept of 2013, while the third will be a four-wheel-drive Country Tourer. 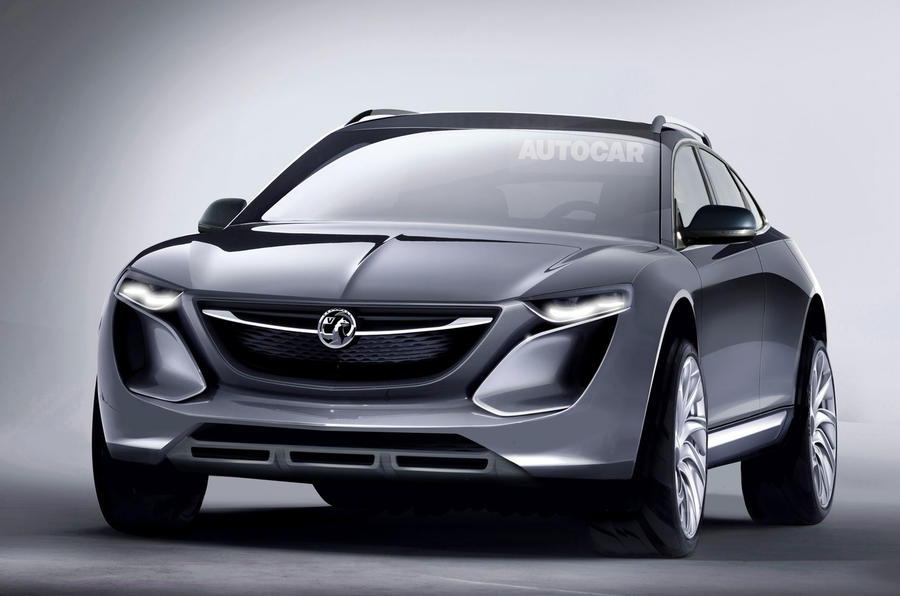 Following these in 2019 will be a larger, flagship SUV, as imagined by Autocar in the picture above, to rival the Nissan X-Trail.

Rory Harvey, Vauxhall’s chairman and managing director, said of the Crossland X: “Our customers’ expectations are changing, so the timing is perfect for an additional model in the Vauxhall range that caters for a new breed of buyer.

"2017 will be a landmark year for Vauxhall. Our portfolio will grow, but it’s the quality and innovation underpinning our new products that will surprise customers."

Vauxhall says its future range will draw in new customers with a more premium brand image.

Better not been seen dead in one of them! Badge snobs hammering a car that has not even left the production line FFS!
smokescreen38 17 November 2016

Most car manufacturers have dodgy names ford Mundaneo, Nissan Cashcow, Nissan Puke to name but a few. So Vauxhall Grandad is probably quite tame to be honest.
Bob Cat Brian 17 November 2016

The cars may be changing for the better, but who wants to drive a Vauxhall Grandad, as this will inevitably be monikered. The vehicle is at a disadvantage before its even revealed.
Mikey C 17 November 2016

Or Grandstand, for any older sport fans!
View all comments (6)