7
In a stripped-back Grandland range, the 1.2 turbo is the sole pure petrol version. How does it perform?
Open gallery
Close

Plug-in hybrids and EVs might be grabbing all the headlines at the moment, but ICE still dominates the sales charts. It’s no different with this Vauxhall Grandland - 80% are either petrol or diesel and it’s the former that we’re in today.

There is just a single petrol offering these days - the 1.2 three-cylinder turbo with 128bhp and 169lb ft, the latter from a usefully low 1750rpm. It’s available in either manual or auto, with a 0-62mph time of 10.4 seconds in our car’s manual. Rivals like the Nissan Qashqai are a fraction quicker and less economical, but the differences are very minor.

The interior design could be a bit more adventurous but the Grandland offers pretty decent value-for-money at the lower end of its range (£26,270 for the base Design vs £25,505 for the cheapest Nissan equivalent). In Ultimate trim tested here, though, it starts to get a bit punchier. You do get adaptive LED headlights (and mighty effective they are, too), bigger 19-inch alloys, larger 10-inch infotainment, Alcantara sections on the seats and other bits to justify the extra spend, but the middling GS Line is probably the trim to get. It gives you most of what you’d want and you save £3500.

This 1.2 is available on all the trims. Like a lot of modern triples, it’s remarkably smooth - there’s a little bit of thrum from the engine bay, but it’s characterful and at normal speeds it never gets intrusive or annoying. Sure, above 4500rpm it starts to grumble loudly, but this is a family SUV, not a hot hatch. 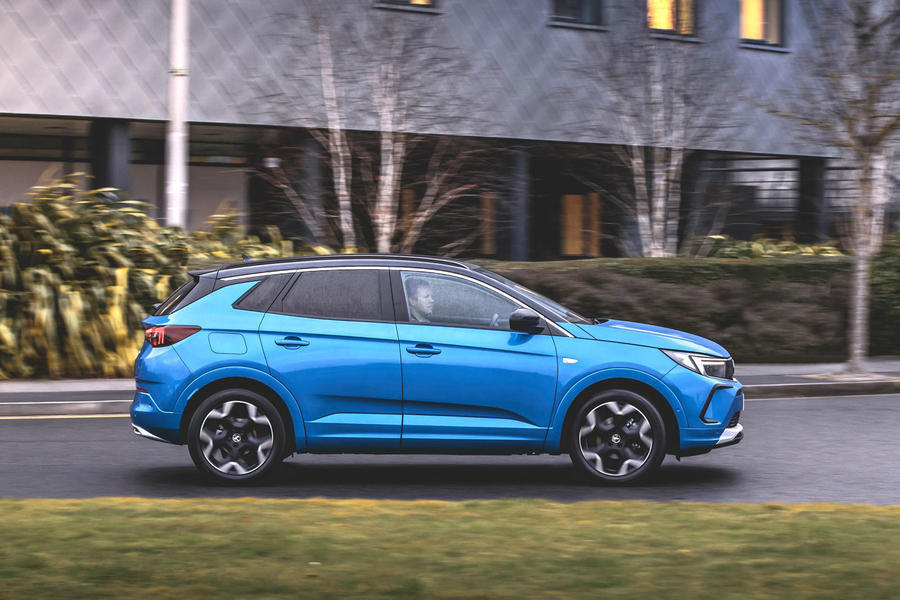 And besides, there are six gears so just leave it in a higher one and let the torque do the … er… talking. Sometimes, that long top ratio can leave you a bit short of oomph on back roads, but the Vauxhall’s engine is flexible enough to cope. We averaged in the low 40s mpg while it was on test, so not a disaster if you’re not doing mega miles each year.

Where the Grandland does come unstuck is in its ride quality. While it’s perfectly comfortable on smooth roads, it all feels a bit disconnected when the car is loaded up over expansion joints and cross axle lumps, like the various elements of the car (seat/tyres/springs) can’t quite get themselves organised together.

It’s a pity because the rest of the handling is acceptable: numb, but it turns in well and just gets on with things with a minimal fuss.

There is a Grandland PHEV that offers all the benefits of that plug-in technology, but if your mileage and budget are both lower (to the tune of £5645), then the 1.2 petrol is a decent offering, if you can ignore the quirks in the ride.