From £15,9508
Share review
Despite sharper aesthetics and a slicker infotainment system, the Octavia remains a car you buy with your head. That’s precisely why it's so popular
Open gallery
Close

Skoda’s biggest selling model in the UK and the go to choice for families who want a comfortable, robust and well-appointed hatchback. Not a car to get excited about then, but one that certainly commands respect.

However, the same couldn’t be said for its characterless 113bhp 1.6-litre TDI engine and straitlaced driving style; criticisms we hope that this car, with its turbocharged 1.4-litre petrol engine and its optional adaptive dampers can rectify. If they can add some much-needed vitality to what is a solid, but rather uninspiring package, then Skoda is on to a winner. Inoffensive; if you ignore the re-styled front end that is. Despite spending the best part of a week with the Octavia, its bisecting front headlights simply failed to grow on us. Perhaps on the hotter vRS models (due later this year), those angular units would look more appropriate, but when they’ve been grafted onto the front end of what is a rather conservative body, the end result looks distinctly ill-proportioned.

Happily, the blending of the new infotainment system and utilitarian interior is an altogether more successful affair. The glossy one-piece touchscreen in our test car was slick and easy to use, despite ditching its physical shortcut buttons for a mostly intuitive on-screen menu. Unsurprisingly, the ‘lesser’ Skoda doesn’t receive the new gesture control system that is available on the more expensive Golf, but it’s no loss. VW’s system is at best a hit-and-miss affair, and at worst a distraction, due to slow response times and a sensor that's mounted too low down. Sometimes less is more.

A sentiment that applies equally as well to the Octavia’s well-rounded 1.4-litre petrol engine. We’ve always had a soft spot for the 1.4 as it strikes a balance between the frugal but slower 1.0-litre petrol engine and the more torquey but less refined 1.6-litre diesel unit further up the range. With 148bhp acceleration is brisk, with 0-62mph dealt with in 8.6sec. Granted, it doesn’t quite have the same shove below 2500rpm as the 1.6-diesel we also tested, but turbo lag is minimal and it revs freely all the way to its 6,500rpm redline.

What isn’t quite so successful, however, is the Octavia’s new adaptive dampers. On longer motorway jaunts you might be tempted to select the Comfort setting, but to do so would be a mistake. Slacken the suspension off and the Octavia deals better with the majority of road scars, but crests and compressions have the rear-end pogoing around like a late 90s Lincoln Town Car. Best to leave the DCC firmly in Normal mode and deal with the slightly fidgety high-speed ride.

That said, for a family car the Octavia is more rewarding to drive quickly than the one-dimensional Hyundai i30 or uninvolving Mazda 3. The steering is light but direct, the six-speed gearbox is slick and accurate and with a 50mm longer wheelbase than a Volkswagen Golf, the Skoda is stable through quick direction changes. Ultimately, the Octavia is exactly what you’d want from a big family car. 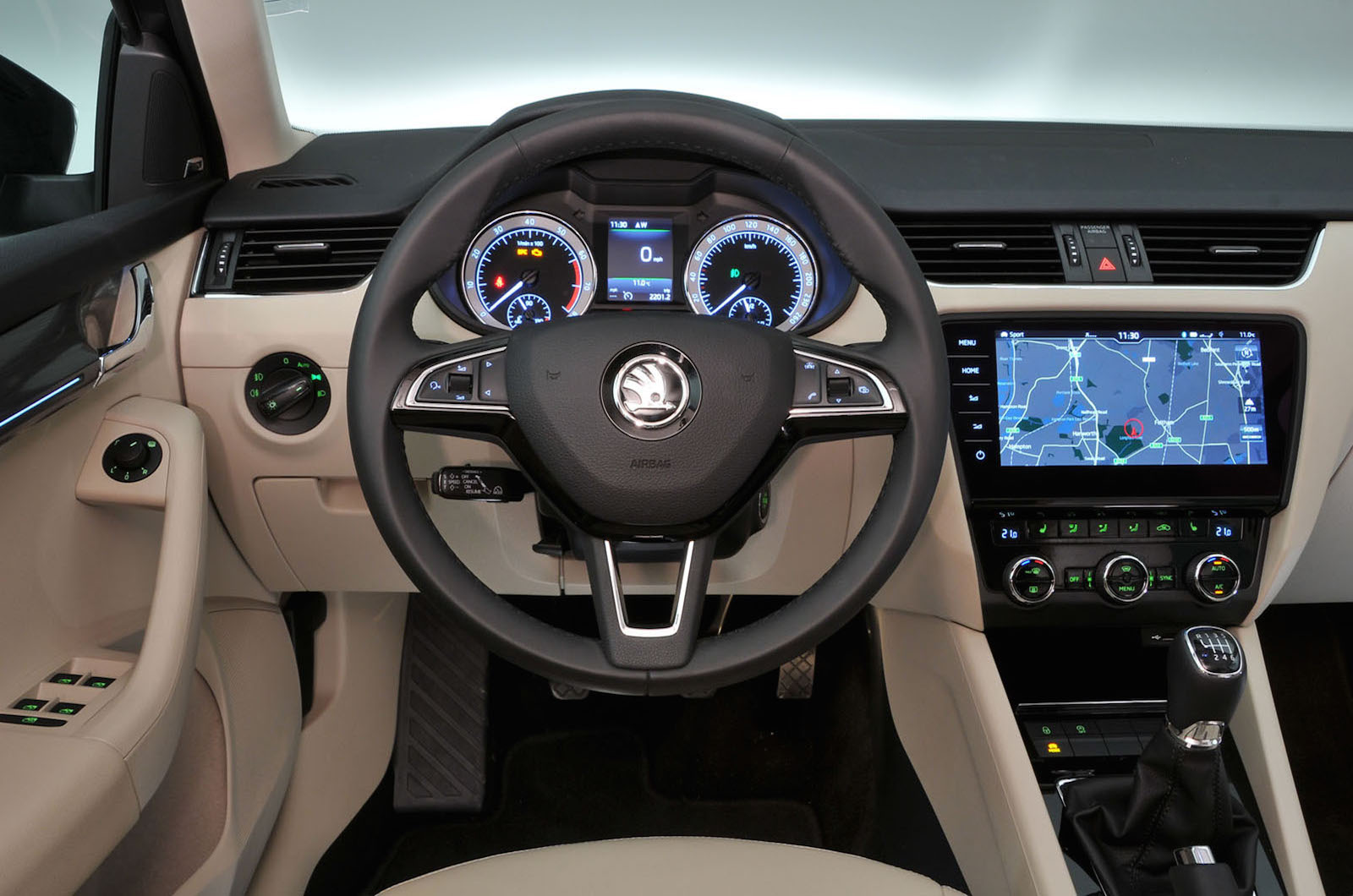 Despite its sharper aesthetics and slick infotainment system, the Octavia is still a car that you buy with your head rather than your heart. But that’s precisely why it is so popular. It will swallow more luggage than any other car its class, sports a relatively bland but undoubtedly high-quality interior and will demolish long journeys with ease. Consequently, those looking for a reliable, functional family workhorse could do no better.

What a dull car. It is so boring to look at. Its target audience must be so dry, think old school teachers with large glasses and cheap tan suits from c&a
db 5 March 2017

At least I will now know what to look for coming down the road to pick me up from a night out, feed back must have told them to split the front lights up so you recognise the bland taxi coming towards you. "competently dull" the white good of cars !
odie_the_dog 4 March 2017

39g Co2 ? Yeah, right. I thought VAG emissions cheat stuff had been rumbled. Lower Co2 than a Prius? I don't think so.
View all comments (10)