From £21,4058
We get behind the wheel of the new Skoda Karoq to see if it has kept some of the traits that made the Yeti so likeable
Close

The Karoq is the replacement for Skoda’s popular Yeti, a rare sort of small SUV that actually had character and a distinct personality.

Based on the same MQB platform that underpins the Volkswagen Group’s other entry-level SUVs, such as the Seat Ateca, as well as any number of hatchbacks and saloons, the Karoq is bigger in all dimensions than the Yeti. That car’s chunky, distinctive styling has gone, but the new model is at least reasonably handsome with its sharp creases and narrow, predator-eyed headlights.

The cabin design is pretty strong, too, but it’s the quality that really impresses. There’s an overall sense of solidity, while the materials themselves feel premium. The soft-touch, rubberised dashboard is particularly good. The upgraded Canton infotainment system that was fitted to our test car, which includes a vast high-resolution display, was perhaps the most impressive element of the entire cabin. The VarioFlex seating system that proved so popular on the Yeti (which allows you to remove, slide and recline the rear seats individually), incidentally, wasn’t fitted here but will be available on the Karoq.

Naturally, there’s bundles of interior space and a very generous boot. The lofty seating position gives the elevated view of the road that seems so popular these days but, helpfully, the car never feels especially big when driving around town. Skoda likes to shout about the various ‘simply clever’ trinkets that are dotted around the cabin - the little sealed rubbish bin in the driver’s door pocket, the rear-facing tablet holders that can be fitted to the front headrests and so on - with good reason; they really are very handy in everyday use. 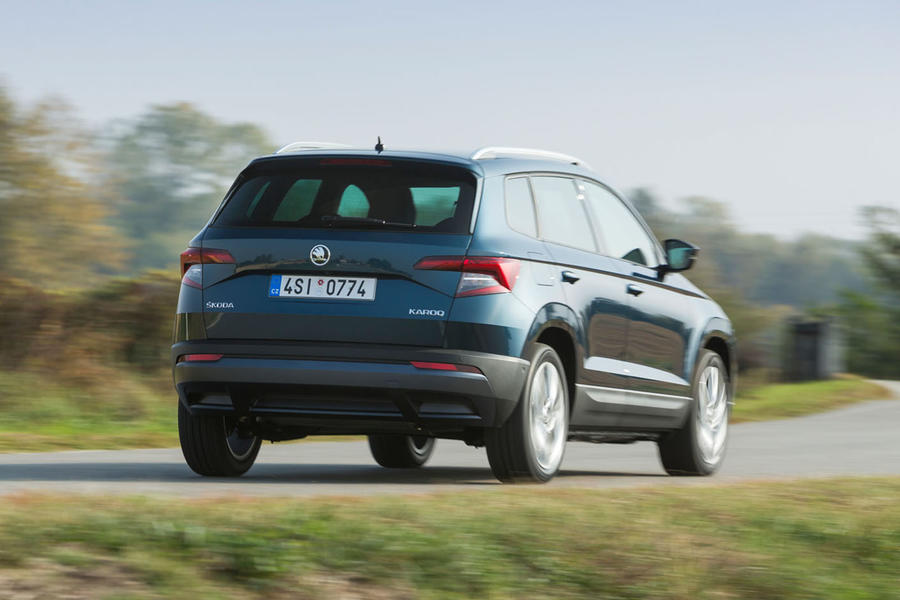 Skoda expects the best-selling engine to be the 1.5 TSI tested here - a turbocharged 1498cc petrol engine that develops 148bhp and some 184lb ft of torque. There is a smaller petrol and a couple of diesel options, too, but this 1.5-litre four-pot is refined and impressively responsive for a turbo unit. With 0-62mph dispatched in 8.4sec, performance is adequate, although the car certainly never feels quick. This engine is so much quieter and sweeter than a diesel lump would be. Skoda claims 52.3mpg on the combined cycle, too, so it’s hardly thirsty.

The six-speed manual gearbox is basically very good, but the shift action was notchier than expected, feeling a little obstructive at times where other VW Group transmissions are oily slick. There is a DSG gearbox option, too, and although this particular car is front-wheel drive only, there are four-wheel-drive models available.

This is a car that majors on comfort, refinement and convenience. With lots of wheel travel and plush suspension, along with meaty tyre sidewalls, the Karoq rides very well indeed. It’s settled, calm and composed even on reasonably broken Tarmac. At motorway speeds, the cabin is calm and serene, too, with tyre noise kept to a minimum and engine noise totally absent, while the only real wind noise seemed to be created by those chunky door mirrors.

Even the steering is rather good. The weighting is natural, as is the rate of response, which means you guide the Karoq along without really having to think about it. Given the tall ride height, it’s no surprise the car rolls a fair amount in spirited cornering, but there’s enough control, grip and stability that the car will hold on gamely if you fling into a few bends. 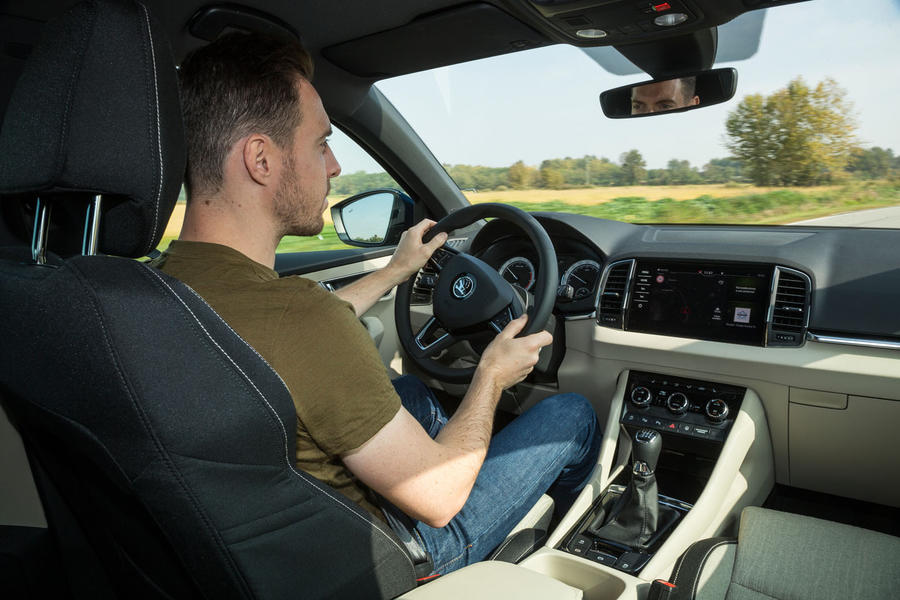 The Karoq isn’t exactly fun to drive, which probably doesn’t really matter. The Yeti could be amusing to pedal along, though. It also had a personality, whereas the Karoq is just a little short of any individuality to call its own. Still, that shouldn't detract too much from what is a very capable and well-rounded family car. 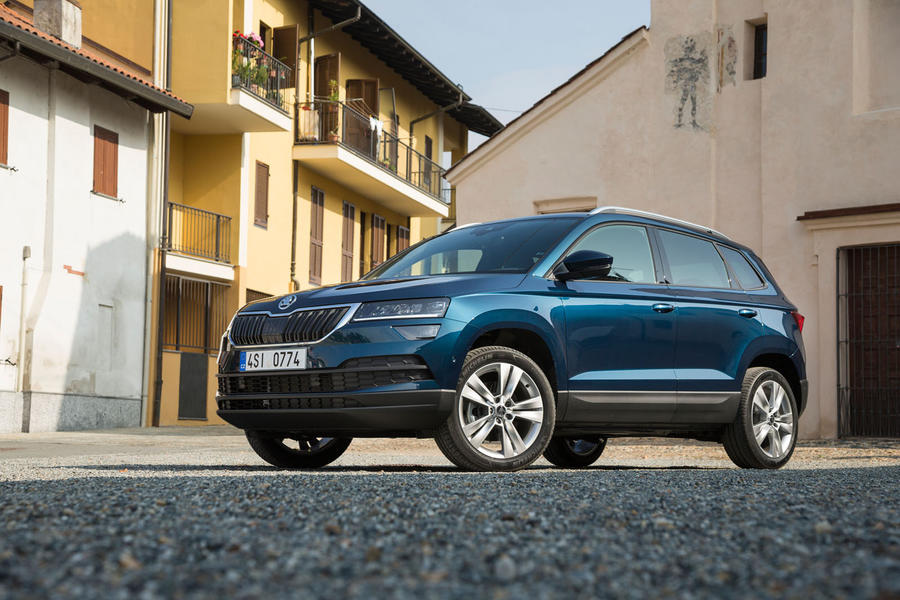 Predictable review, but probably no less accurate for being so.  No doubt this is a very competent car, it's just a crying shame that Skoda has been denied the opportunity to keep the spirit of the Yeti intact.  My suggestion would be to rush out and see if you can get an end-of-the-line car and enjoy it while you can.

More or less a rebadged Ateca

And none the worse for that.

And none the worse for that.

I think the VW group rushed out this model as the Ateca as Seat hadn't really had anything new for a while. It was obviously  a Skoda intended model from the start and has no Seat styling features bar the grille they stuck on the front. This seems a bit pricey though.

I find this one a bit strange. The Yeti was a wonderful, popular car with very distinctive styling and the ability to carry tall loads given it's height. Skoda then throws that away by bringing out a Tiguan clone. I know that cost sharing is bringing many brands together and if it leads to cheaper prices then the consumer benefits but the VW, Skoda and Seat small SUVs all look too similar and it is Skoda that has lost out IMHO.

11 October 2017
Sticking different badges on the same car worked so well for BMC and BL.

This poor chap could have reviewed the Karoq just as well by driving an Area.

Sounds like an Ateca that's improved by not having a 'sporty' set up. Dull but worthy.

It's a sad day when even Skoda is denied a trace of individuality.  One of the few less-expensive but more interesting SUVs is being replaced with a generic badge-engineered anonymobile.

Is this the return of the spirit of BLMC, who took Riley and Triumph and all the others and then turned them into Austins?

It's a sad day when even Skoda is denied a trace of individuality.  One of the few less-expensive but more interesting SUVs is being replaced with a generic badge-engineered anonymobile.

Is this the return of the spirit of BLMC, who took Riley and Triumph and all the others and then turned them into Austins?

Oh come on! the old Yeti

Oh come on! the old Yeti looked like Postman Pat's van, the boot was dire, it drove well but not too refined, you could feel vibration through the controls.This car is an absolute steal for the money, cheap even if loaded with kit, far bigger boot and more practical. Unlike the Seat and VW version the Skoda gets the better 1.5tsi with a company car friendly 127g/km (even with DSG). It seems it rides well, great. The model tested should have had adaptive dampers with adjustable ride settings, perhaps they had it on too soft if it rolled too much?