From £75,0749
Porsche seeks to milk its greatest asset further with pleasing if not Earth-shaking effect. But is the Carrera T more alluring than the standard 911 or Carrera S?
Open gallery
Close

First, let’s deal with the name. Believe the marketing hype and you’ll think the original 1968 Porsche 911T (standing for Touring) was conceived as a stripped-back lightweight driver’s car fine-tuned for the open road, and that this modern 911T pays homage to that legend. It does nothing of the sort.

Fifty years ago, the 911T was a cut-price, poverty-spec 911 designed to boost sales. Porsche took money out of it wherever it could – none more so than in its engine, which was so detuned that, at 110bhp, it was and remains the least powerful 911 ever offered for sale. Regardless of name, this new 911 Carrera T takes a completely different approach, not least because, at £85,576, it’s almost 10% more expensive than the Carrera coupé on which it’s based. The original T was well over 10% cheaper than the standard 911 of the time. In fact, today’s T is a far more carefully honed road warrior than its ancestor ever was.

Even so, there’s been no revolution here. So if you were hoping the Carrera T would be a mini-me GT3, look away now. But that’s not to say there’s nothing interesting going on. The motor is the stock 3.0-litre turbocharged Carrera unit, as is its seven-speed manual gearbox. But the shifter has been made a little shorter and the whole thing runs through the final drive from the Carrera S, dropping the gearing more than a touch. More significant still is the standard limited-slip differential, Porsche’s highly effective PASM adaptive damping system (and the 20mm suspension drop that comes with it), 20in rims and standard fitment of the Sport Chrono pack, with its steering wheel-mounted mode switch. It has sports exhausts, too. These items alone would amount to almost the additional cost asked by Porsche were it possible to fit them all as options to a Carrera. Four-wheel steering, unavailable on the Carrera, becomes an option here. So far, so good.

To negate the additional weight of these systems, Porsche sells the car as standard with no rear seats and no infotainment system. But since both are no-cost options that I bet a statistically negligible number of customers will pass up, a cynic might conclude that the Carrera T had been configured this way just to enable Porsche to give the perception – rather than the reality – of a car made lighter. In truth, despite lightweight glass being fitted to the side and rear windows and the removal of some sound deadening, even without rear seats and sat-nav the car is just 5kg lighter than a standard Carrera. However, Porsche points out that were the cars in comparable specs – ie if you fitted the Carrera with the diff, dampers, big wheels and so on – that figure would be 20kg.

Visually, the Carrera T has a deeper front splitter – indistinguishable to these eyes from that fitted to a Carrera S – and badging down the side and on the engine cover. Inside, leather is now used only for the seat side bolsters, with the rest covered in a rather attractive Sport-Tex material. There’s more badging in the rev counter and on the kick plates, door pulls rather than handles and, if you’re a real 911 geek, you’ll notice the map on top of the gearlever is now depicted in red paint. 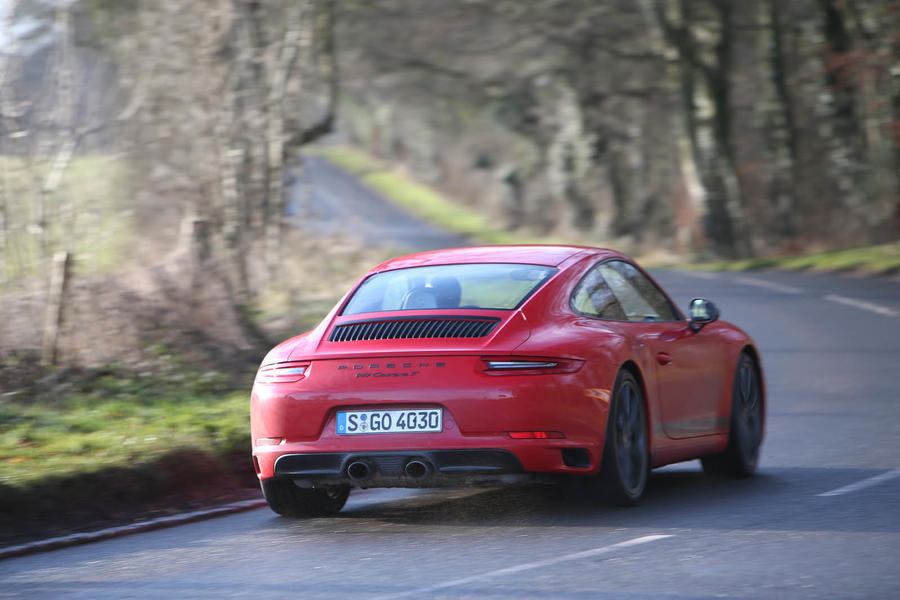 To expect such changes to transform the 911 would be optimistic to the point of naïvety, but it is also to imply that the 911 is in some need of transformation. It is not; before Porsche’s T-squad laid a finger on its flanks, the 911 was by some distance already the most desirable and effective performer in its category. Expect, instead, a car with just a little more edge; a top-quality Sabatier recently recovered from the sharpening stone.

It doesn’t sound like a Le Mans-specification 935 when you fire it up, despite the removal of some of its sound lagging. Instead, and to these ears at least, it just sounds 5% more urgent and only when you’re really working the motor. I drove to try the Carrera T in a standard Carrera S and, if the latter was more refined than the former at a steady cruise, these ears could not detect it.

The surprise is how fast it feels – scarcely slower in the lightly optioned spec tested than a lavishly equipped Carrera S, despite the whopping 50bhp difference in their engine outputs. It makes you realise that, every time you tick a box to add one more goody to a car like a 911, so you also remove a small chunk of at least part of the reason you bought the car in the first place. Certainly on quick but slippery British lanes, I never once found myself wishing they’d applied this treatment to the Carrera S with its more powerful motor or even wondering why they did not.

There is a certain purity here that plays perfectly to the less-is-more narrative that has accompanied the 911 in the 30 years I’ve been driving and writing about them; and you notice it most on roads and in conditions like these. For where the GT3 analogy is briefly but significantly relevant is that if you want a 911 that handles better than the Carrera T, that’s what you’re going to need to score.

What you notice first is how easy it is to drive fast and then how much fun. I will confess this is partly because the car came on Pirelli Sotto Zero winter rubber ideally suited to these conditions; but even taking this into account, it feels almost unnaturally fluent given that it’s still a powerful, rear-wheel-drive car traversing unusually treacherous countryside. The PASM system allows you to stiffen the dampers, but it’s far better to keep them soft and let the body move a little. Then you can really lean on the car’s strengths, particularly the immense traction provided by the engine location and the limited-slip differential. It’s not the kind of heart-thumping, life-affirming ride a GT3 might provide on the right road, but it is still a deeply satisfying and significantly augmented 911 driving experience most will delight in savouring. 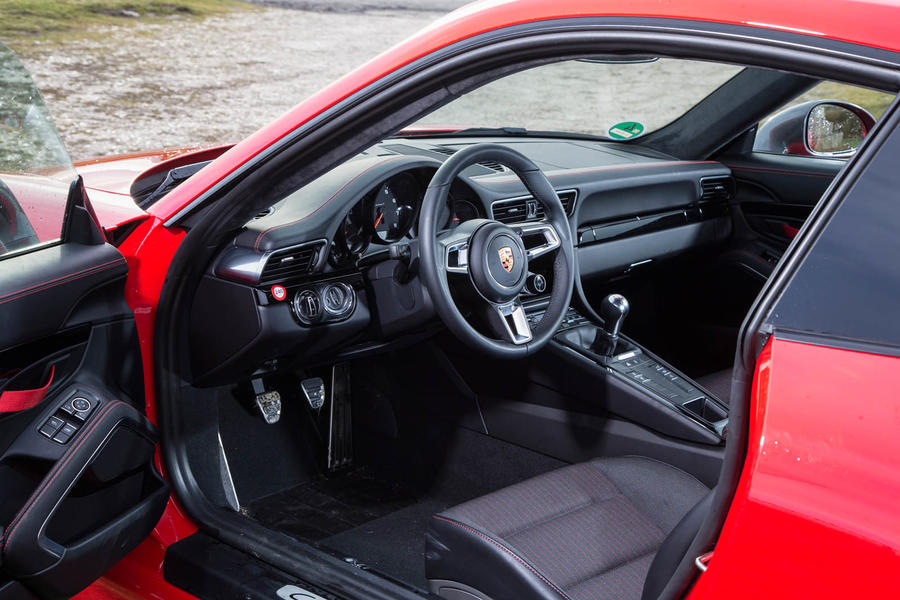 But it could be better still. The seven-speed gearbox is nowhere near as good as the six-speeder in the Cayman and Boxster – and something, presumably its shortened final drive, has hammered the claimed fuel consumption. On paper at least, this 365bhp car uses no less fuel than a 444bhp 911 GTS, with a commensurate hit in CO2 output and associated tax liability.

Even so, for those looking for a 911 with all the comfort and daily usability of a normal 911 but an even more authentic driving experience, the nicely honed Carrera T is well worth a look. I just wish they’d used another letter: unlike most modern cars that seek shamelessly to exploit their heritage, the new 911 Carrera T is in no way a faithful reinterpretation of the original. It’s far, far better than that. 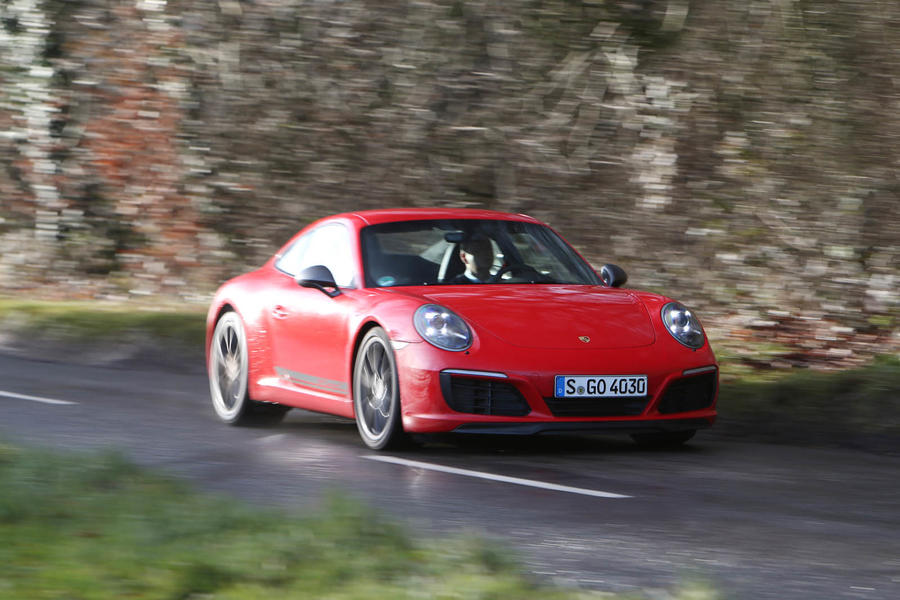 I think the price is quite okay and considerable, We will surely look into this and might consider it with my wife.

Agree with the author and some of the comments; what a missed opportunity! If Porsche really wanted to offer a lightweight, back to basics drivers car, then take out all the electric motors (seats, windows, etc), put some smaller lightweight wheels on, and make a little more effort to remove weight. Then do a small ECU upgrade, tweak the manifold inlet and the exhaust and there you have it. Instead they leave the heavy electric motors in place and offer fabric door pulls!! Caveat, I am a Porsche fanboy, owned them all my life, currently enjoy a GT4, but this is really just a marketing exercise as others have postulated. As someone currently deciding on the spec of my 2018 GT3, this had the potential to save me $50k whilst still offering an enthusiasts 911. Am I alone in concluding this is an attempt by Porsche to tempt those not fortunate enough to get a GT3 allocation to stay with Porsche and not look elsewhere? Question to the forum, "if 911 required manual adjstment of seats, would that influence your buying decision?"

So these Carrera 'T' have not been a hit here in the USA, less than one year old super low mileage (1k) examples being offered as Porsche CPO for up to $25k off MSRP. Means you can get one for circa $85k well optioned, which is Cayman S money! I just snagged one as at that price it looks a great value proposition given I am getting 5yrs of warranty (3 remaining original and 2 CPO). Traded the GT4, only time will tell if I regret it?

THE question of course is...