From £75,0749
A better bottom-rung 911 than there has ever been in all ways bar one - and what’s given up on charm is generously made up for elsewhere. We drive it in the UK
Open gallery
Close

The Porsche 911 Carrera, the ruination of which, by the desertion of naturally aspirated engines and the adoption of turbochargers, has been one of this year’s hottest talking points – and, inevitably, quite needlessly feared.

Rest assured, the 911 is alive and kicking. Still rich, rev-hungry and sabre-edged under your right foot; still precise, tactile, characterful and responsive in everything it does. Not totally unchanged, granted, but still special. Just dandy, in fact, thank you very much.

If last month’s five-star review of the new 414bhp Carrera S wasn’t proof enough of that, take this one as bankable certainty. We’ve now driven the car in right-hand-drive form, on UK roads and in bottom-of-the-pyramid Carrera manual trim.

And while it represents a bit of a departure for one of the world’s longest-serving and biggest-selling sports cars, the new 911 remains one of the very finest and most complete driver’s cars on the planet. Progress is writ large throughout this car, whether you like the idea of what’s gone on inside the engine bay or not.

Using the same 3.0-litre flat six as the Carrera S but with smaller turbos, the new entry-level Carrera is two-tenths of a second faster than old from standing to 62mph, as well as 20bhp more powerful, 44lb ft torquier (with peak twist made almost 4000rpm sooner in the rev range), 45kg lighter and 10% more fuel-efficient - although the list goes on. And it still revs to 7500rpm – just 300rpm shy of the 3.4-litre motor’s cut-out. 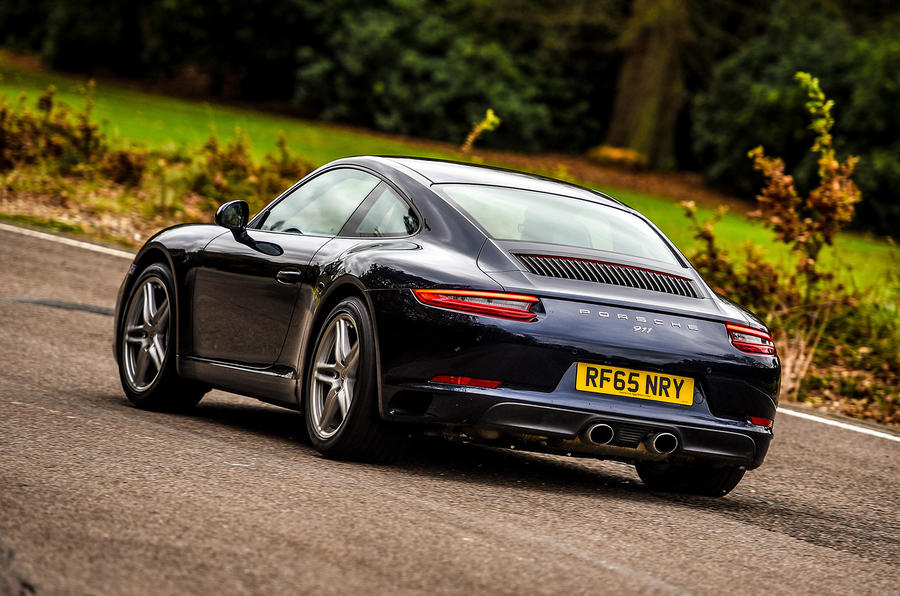 This is turbocharging done sensitively, with a small ‘t’, and it doesn’t harm the 911’s driver appeal in any serious or lasting way.

The normal audible tell-tales have been skilfully handled here, so that once that 3.0-litre motor is spinning, you really wouldn’t know it was force-fed. Not from the cabin, anyway. Listen to the car from the kerb and you can hear some whistles and hisses.

But from the driver’s seat, the delicious and inimitable flat-six combustion howl is all you really perceive – albeit in more muffled, less spiky form than before, as if the car’s engine has had a thick blanket wrapped around it.

Throttle response is, if not quite pin-sharp, as near as makes very little difference. Performance can be poured on in luscious, fizzing, splattery doses through the mid-range in time-honoured Porsche 911 mode, but while having 332lb ft available from less than 2000rpm gives the long-travel accelerator more authority in the higher gears, there’s still real freedom for the crankshaft to spin well beyond 6500rpm.

You don’t quite get the dramatic crescendo with which Porsche has spoilt us in the past, and there’s just a hint of gathering breathlessness above 7000rpm, but there are old-fashioned, big-bore, flat-six fireworks here all the same.

The facelifted 911’s ride and handling has undergone a makeover, too. New-generation PASM adaptive dampers are now fitted as standard on both Carrera and Carrera S models, 19in wheels are up to 11.5in in width at the rear axle and there are retuned main suspension springs, new rebound springs, new anti-roll bars and a nominal 10mm drop in ride height compared with the old, passively damped Carrera.

The car’s ride now feels tauter, flatter and more cleverly damped than it used to. While old 911s would gently bob over their front axle when disturbed by a bump, in turn disrupting the consistency of the steering, the pre-facelift ‘991’ had a slight tendency to pogo over its rear wheels when deflected vertically.

But this new one has much more responsive close body control. Its suspension handles sudden crests and dips all of a piece, with just enough amplitude over the driven axle to remind you where the engine’s sitting.

Handling is, if anything, a bit crisper than it was, and steady-state cornering balance is excellent, with the 911’s rearward weight bias continuing to give you options for enlivening the car’s attitude on a trailing throttle but never threatening to destabilise the car in broader terms.

The other main update to the 911 is its new infotainment system, which looks much more sophisticated, responds much more quickly and cleverly to touchscreen inputs and is easier to navigate than before. Apple CarPlay smartphone mirroring functionality has been added, while inductive wireless phone charging is also an option. 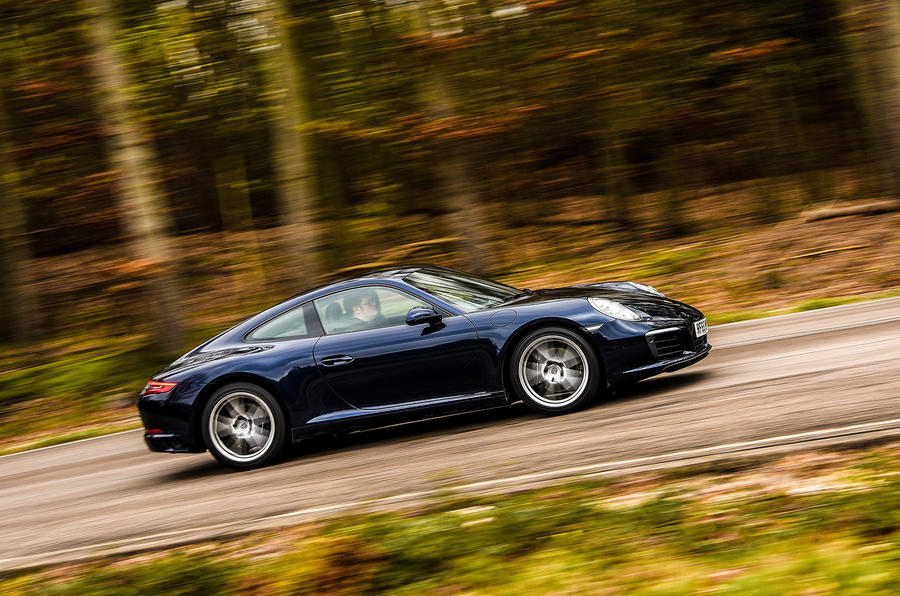 Don’t think twice. The entry-level 911 now has the real-world punch to complete a list of qualities that also includes excellent usability, poised and engaging handling, excellent cabin quality and up to date multimedia systems.

If we’ve got one issue with it, it’s to do with the erosion of dynamic character. Just as it’s said that West Highland terriers and Jack Russells often have more ‘dog’ in them than dopier canines several times their size, so I’ve often thought that lesser 911s often have more ‘911’ in them than others. Needing to be revved harder, and handling according to softer and more exaggerated rear-engined type, they somehow deliver greater charm, driver engagement and authenticity than their more expensive siblings, and even greater distinctiveness next to their rivals.

For all its new-found completeness, this new Carrera doesn’t quite manage the same trick – although, in so many objective ways, it’s unquestionably a more competitive prospect than ever. 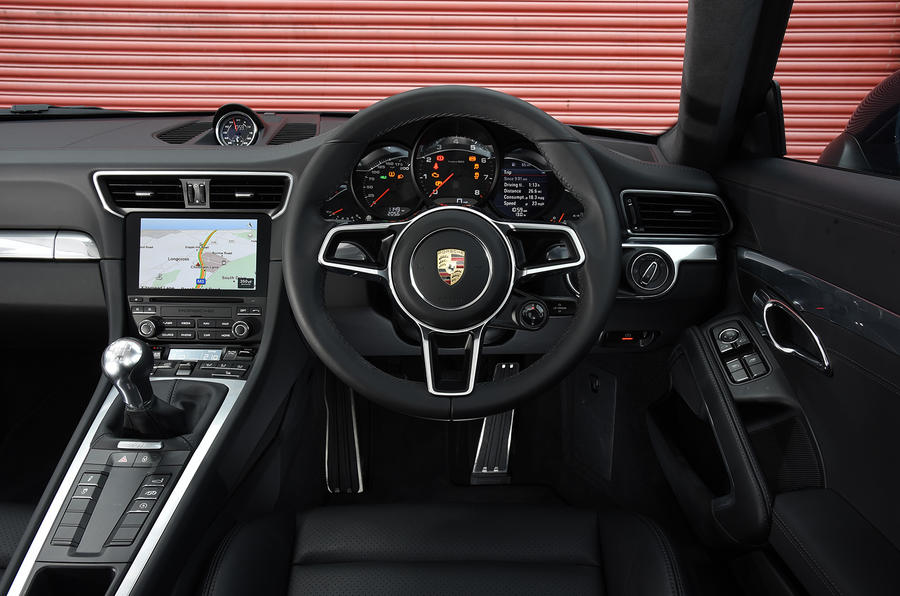 I specced a manual 991.Gen 2 with a sports exhaust (essential I now understand in the new turbo era), a sunroof, standard interior, xenons, heated seats and other basics like folding mirrors and rear wiper: I got to.....gulp.....£ 85K.

That,for me, is an unbridgeable gulf of a price difference. How on earth does Zuffenhausen justify that ?

Not anymore a Carrera :-|

I'd still have a Cayman

I'll take the less is more philosophy a step further and take a Cayman. The smaller the better for a sports car, particularly when you can still have one with a flat 6 engine.