From £44,7589
Share review
The 718-generation Boxster is our favourite roadster of the moment – so is this new GTS variant worth the extra outlay?
Share
Open gallery
Close

Short of reuniting the car with half a dozen high-revving cylinders, you’d have a difficult job improving the 718-generation Boxster.

Porsche's latest roadster is handsome, it offers performance almost perfectly proportioned to congested British roads, and it is in possession of absurdly biddable handling that anybody can enjoy. Without an outlay exceeding six figures, there is simply no better roadster to own if you value agility and communication.

All of which means we should greet with arms wide open this new GTS variant. It’s an optimised mechanical and styling package that will head up the range until a Boxster Spyder arrives later this year with a version of the 4.0-litre firecracker from the 911 GT3. Yep – all six cylinders. 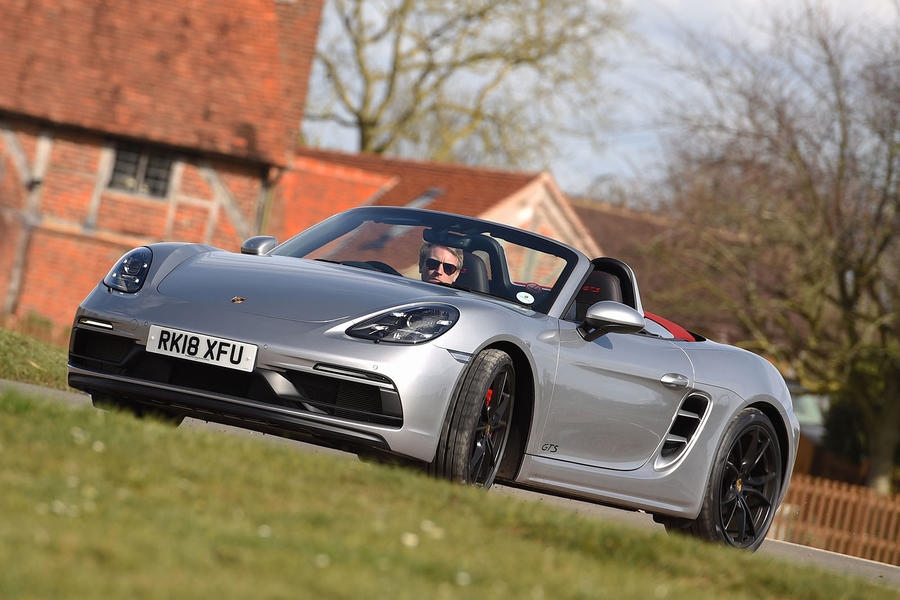 The aesthetic changes are standard GTS fare, and there’s black plastic skirting, dark 20in alloys borrowed from the Carrera S and tinted lights alongside Alcantara interior trim and plenty of model designations. In silver with a classic red roof, our test car does the baby-supecar thing admirably well.

The principal hardware changes are the addition of Porsche Active Suspension Management, which sits the body 10mm lower than a Boxster S, and there’s also a mechanical limited-slip differential for the driven rear axle. You can, however, go 10mm closer to the tarmac still by opting for the PASM sports suspension, with which our test car is furnished.

We've previously driven the 718 Boxster GTS on forgiving European roads, where it was superb. Now we have it in the UK for the first time, giving us an opportunity to discover how well it takes to this country's more decrepit tarmac.

Despite a significant drop in ride height there's no sign of brittleness. On the PASM the GTS rides with an outstanding economy of body movement and ultra-crisp wheel articulation. It is beautifully balanced, it is keen in its response to the throttle pedal either dipping or rising, and it is endlessly tolerant of mistakes in a way you simply wouldn’t credit of a mid-mounted sports car.

Even on these wheels, it is far from being uncomfortably stiff, and traction is absolute until those times when you seek to break it. Porsche has also left its electro-mechanical steering unchanged for this application, which is a good thing because this setup is delightful not only in its accuracy but in the way it furtively encourages you to make very deliberate inputs. 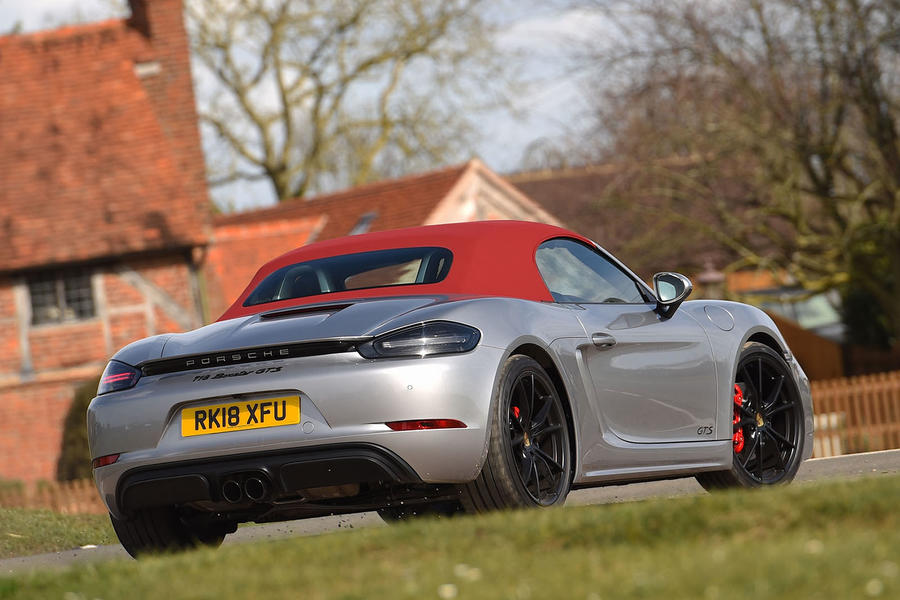 Another benefit the GTS package brings as standard is torque vectoring, which brakes an inside wheel to help pivot the car on the way into corner. In conjunction with the differential, it helps transform more tortuous routes into something of an exhibition in dexterity and sheer ground-covering proficiency, and is well worth the increased wear to the rear discs.

Courtesy of an audibly more voluminous intake and some fettling to the single variable-geometry turbocharger, power for the 2.5-litre flat-four has risen to 361bhp with torque rated at 317lb ft. That’s 15bhp and 7lb ft on the Boxster S – not a lot, admittedly – and 26bhp and 37lb ft on the sweet, naturally aspirated Boxster GTS of the previous generation.

But here’s the thing: that torque figure arrives from only 1900rpm and yet peak power requires you to scale 6500rpm. It means that while this engine remains more aurally akin to Brian Blessed than Bryn Terfel (particularly so with the sports exhaust system, with its central black tips) its power delivery is deliciously flexible and the cranksahft spins buoyantly, too.

The torque is especially useful because it ameliorates the Boxster’s overly tall gearing, though there is noticeable lag below around 4000rpm. All in, the car is damnably quick but just slow enough to let you feel as though you’re really working it reasonably hard on the road – a fine trick to pull off, and rewarding with it.

With all the choicest optional extras already fitted to the GTS, the only decision you’ll need to make is whether to have the six-speed manual or the seven-speed dual-clutch gearbox. The latter drops the 4.6sec 0-62mph time by three tenths and is fantastically clinical. The manual is 30kg lighter, has a gratifying throw and the rev-matching function works nicely for those times when you just want to get home. Either will do just fine.

The premium for this car over the 718 Boxster S is around £8000, but as we’re used to seeing with GTS models, it would cost more to option the additional parts yourself. What's more, you still wouldn’t get the power upgrade.

Predictably, then, if you can afford it, this GTS is the one to have. It's a car of rare dynamic polish at any price and all the sports car you could ever need. 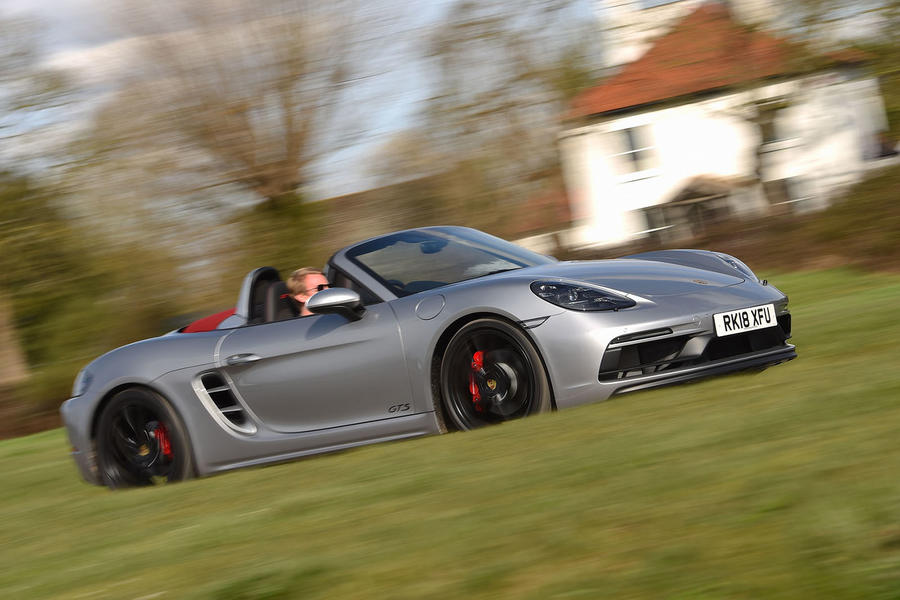 It doesn't matter how

It doesn't matter how powerful or flexible it is.  A cement mixer is a cement mixer, and this is not a desirable car.

For equal money, I would much rather have an immaculate previous generation Boxter with a flat 6.

Peter, I am currently a Cayman owner (GT4). I recently drove at Las Vegas Motorspeedway (short course) a Cayman GTS and 911GT3 back to back with a professional instructor. Getting out of the Cayman I had a smile on my face. Getting out of the GT3 I was grinning from ear to ear and had to be coerced. Believe me, the fun factor is significantly ramped up in the GT3! Don't take my word for it, try it for yourself, you might thank me.

Peter, I am currently a Cayman owner (GT4). I recently drove at Las Vegas Motorspeedway (short course) a Cayman GTS and 911GT3 back to back with a professional instructor. Getting out of the Cayman I had a smile on my face. Getting out of the GT3 I was grinning from ear to ear and had to be coerced. Believe me, the fun factor is significantly ramped up in the GT3! Don't take my word for it, try it for yourself, you might thank me.

. I have Driven a GT3, and older one, one with a manual box, it wasn’t what I’d expected, grippy it certainly was ,but, I found the gearbox obstructive, I couldn’t change cleanly, a bit jerky, a disappointment...?,well, a bit, I’ve always drooled over Porsche’s, this kind of lessened it.

15 March 2018
An unfortunate last two letters on the number plate of a press car ?

So is the 718 better than the Cayman was?

I had a standard Cayman, and it was fantastic in the dry and had a wonderful engine. However, in the wet it was unbelievably twitchy, and would be mullered on a wet roundabout by most hot hatches (don't ask me how I know this...). So what's the on limit wet handling like, what's the wet lap time vs hot hatches and comparable cars?

Can't say I've ever felt the 718-gen cars to be particularly twitchy in the wet, though the ones I've driven have had the benefit of fresh tyres and, I imagine, meticulously maintained geometry.

Regarding limit-handling, when we road tested the 718 Boxster at Mira on the wet handling circuit it remained composed even under provocation, with a terrifically true front axle. On the same circuit we lapped a manual 718 Cayman S only 0.5sec shy of what a TT RS could muster (yeah, really…).

For reference, a Golf GTI Performance was around 12sec slower than either.

But it's a Porsche without

But it's a Porsche without engine !