From £44,7589
Share review
The Porsche 718 Boxster is already a compelling car, but a few tweaks on the dynamics and power fronts make the GTS almost the perfect roadster
Open gallery
Close

Here is the Porsche 718 Boxster GTS, the latest incarnation of a car that's held in very high regard here at Autocar.

Revealed to the public at the Los Angeles motor show, the new open-top roadster is set for UK delivery in mid-December. With a starting price of £59,866, it's priced £1861 below its fixed-roof sibling, the 718 Cayman GTS, with which it shares its upgraded mechanical package.

Over the years, Porsche has reserved the GTS name for some very memorable models. Again it has on this occasion. The 718 Boxster GTS slots into the line-up above the 718 Boxster S, bringing with it a number of subtle styling changes, a more powerful turbocharged four-cylinder engine and detailed changes to its chassis.

Among the more important changes brought to the car's 2.5-litre flat-four is the adoption of a larger intake duct, providing a greater volume of air for the combustion process, as well as a revised variable-vane turbocharger that operates at a maximum 1.3bar. The result is a subtle 15bhp and 7lb ft lift in output, with 361bhp arriving at 6500rpm and, in combination with the optional seven-speed dual clutch gearbox fitted to our test car, 317lb ft of torque available from 1900rpm through to 5500rpm.

By way of comparison, the previous Boxster GTS delivered 335bhp at 7400rpm and just 280lb ft at 4750rpm, so despite ditching two cylinders, the new engine is not only more powerful but brings a load more torque to the party, too.

Porsche says the four-cylinder is similar in weight to the old six-cylinder, owing to the plumbing associated with its turbocharger and larger exhaust. Even so, the new 718 Boxster GTS is 30kg heavier than the old Boxster GTS, at 1405kg. Interestingly, this is the same weight as the 718 Cayman GTS, so despite its folding roof, the Boxster apparently gives nothing away to its coupé sibling.

Distinguishing the GTS from the S are a series of subtle styling changes. These include a lightly altered front bumper, black tinted lights, a more prominent diffuser and centrally mounted black tailpipes as part of a standard sports exhaust system.

There are also black GTS badges at the base of the doors, black 20in alloy wheels shod with 235/35 tyres up front and 265/35 tyres at the rear and a 10mm reduction in ride height as part of the chassis changes brought on by the standard adoption of Porsche’s Active Suspension Management (PASM) system. 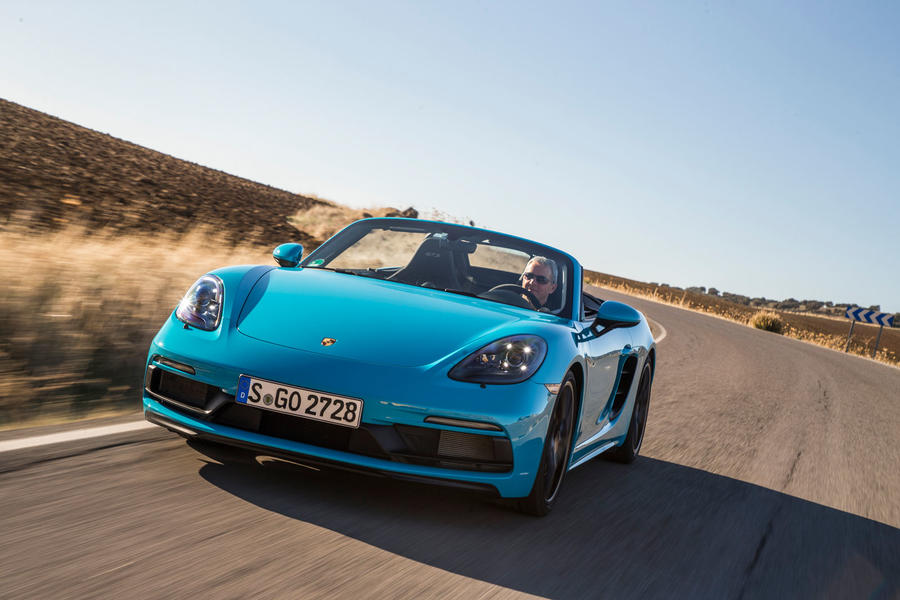 There's a lot to like about this car before you even turn the key. Not least the driving position, which is among the best you’ll come across in any car, providing a fittingly sporting feel right from the outset.

On the move, the GTS's mid-mounted engine has nearly every base covered. It's wonderfully responsive at lower revs around town, magnificently flexible through the mid-range and fantastically eager when you’re able to explore its redline with a heavy dose of wide-open throttle. It's the wholesale increase in torque and its ease of accessibility, not the outright power or the linear power delivery, that moulds the driving experience.

But there are issues, with one in particular hard to ignore: the sound of the compact four-cylinder, which can only be described as disappointing. It's a flat and muffled tone that gets deeper and more throaty the more you work it, never reaching the sonorous heights of the old six-cylinder. In any of its driving modes, the undistinguished exhaust tone is the one element that lets this otherwise tremendously engaging car down.

That's a shame, because the rest of the 718 Boxster GTS is phenomenal – not just its sheer driveability, improved acceleration and compelling all-round performance, but also its steering accuracy, handling sharpness and stunningly effective braking ability.

The various tweaks brought to chassis have broadened the dynamic envelope of the 718 Boxster, making the GTS better to drive than the S. The change in character is not immediately apparent around town, but it's certainly noticeable when you find a suitably challenging back road. There's a delicate feel, wonderful flow and superb control to the car's actions.

The limits, previously only really attainable on track, are now more accessible than ever. The sheer progressiveness in the way the GTS can be made to edge up to the point where its front tyres begin to relinquish their grip in a confidence-boosting touch of understeer on the entry to more tightly apexed corners is quite sublime.

The combination of a mechanical differential, Porsche’s torque vectoring system and those fat tyres at the rear also provide it with outstanding traction, allowing you to make the most of its added torque at the exit to corners. 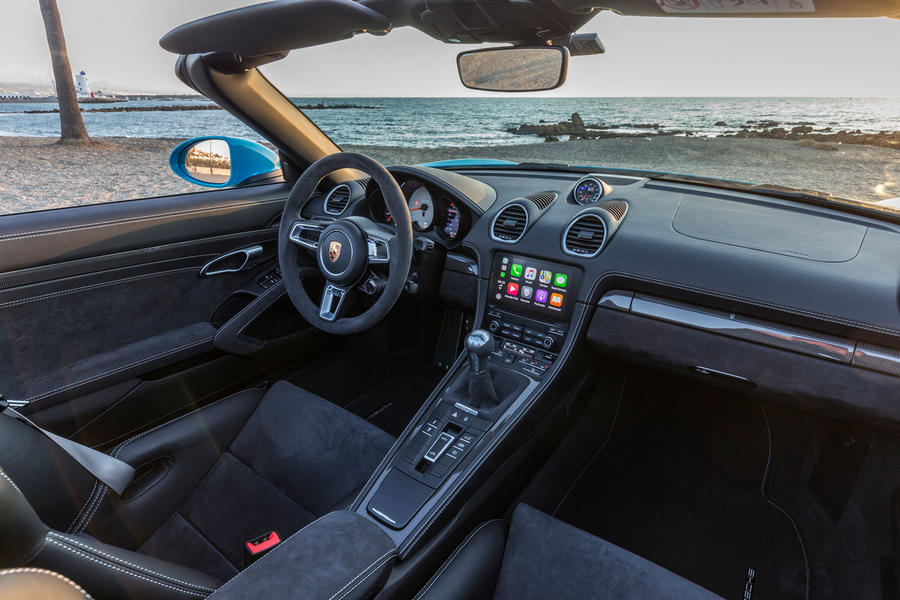 If you cherish driving and have no pressing need to own a car with more than two seats and a relatively meagre 275 litres of luggage space, the answer is an unequivocal 'yes' for the GTS.

Its new turbocharged four-cylinder engine might lack the visceral properties of the old model's naturally-aspirated six-cylinder, but it endows the car with the sort of performance to match Porsche's much more expensive 911 Carrera Cabriolet.

However, it's the sheer delicacy and accuracy of its handling that really seals the deal here, even at a price that pitches it £6987 above its predecessor. Granted, it might not provide quite the same level of everyday practicality as the mechanical identical fixed-top 718 Cayman GTS, but for sheer pose value and price, it has its sibling beaten. With a more enthralling exhaust note, it would be a five-star car. 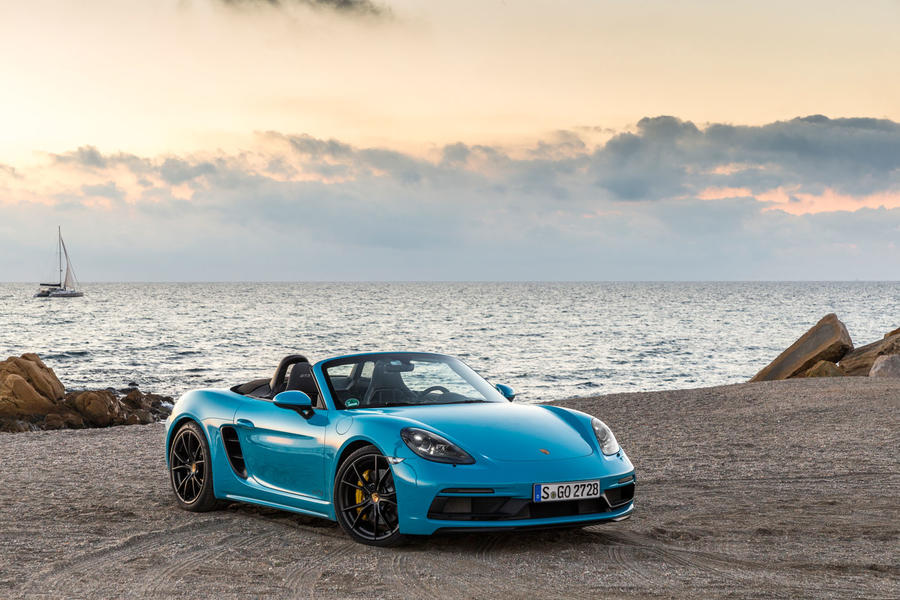 My neighbour had a six

My neighbour had a six cylinder Cayman, and now for reasons known only to himself he has now got himself a brand new 718 Boxster instead.  I don't know what the difference for him is in terms of driving pleasure, but it certainly gives me much less aural pleasure when he starts it up and drives off

"can’t imagine Porsche will ever be able to give this car the sound it deserves, unless they fit the 6 in it, which is highly unlikely."

They have confirmed that the NA 6 cylinder will be going into the Spyder though, with well over 400bhp if I remember correctly.