From £25,0008
Peugeot's rakish 508 has been converted into a practical, load-lugging estate. Is this the 508 variant to go for?
Open gallery
Close

Proof, if anything, that the bods within Peugeot’s design department really know their way around a sketch pad. The 508 saloon is already a sharply dressed example of gallic cool, but to this tester’s eyes the new 508 SW (that’s station wagon, or estate to you and I) is an even prettier sight to behold. Bravo, Peugeot.

Anyway, that a more practical estate version of the French firm’s new offering within the D-segment would eventually be rolled out was something of an inevitability. After all, within the wider European market, estates account for 60% of all sales within this sector. The Germans, it seems, have a particularly voracious appetite for wagons.

And so, at this year’s Paris Motor Show, the world received its first glimpse of the new 508 SW. Measuring 4790mm in length, the estate is 40mm longer than its saloon counterpart (this extension largely being concentrated at the rear), while the roofline is some 17mm taller. It’s also porkier to the tune of 40kg.

This minor swelling of the 508’s proportions has obviously been induced to increase the amount of useable boot space, because an estate with a smaller boot than its saloon sibling would be a bit of a pointless exercise, wouldn’t it? The load bay floor is now 25mm longer than the saloon’s, and seats-up capacity has been increased from 487 litres to 530 litres, which to Peugeot’s credit is more than you get from a BMW 3 Series Touring (495 litres) or a Mercedes C-Class Estate (490 litres). Collapse the second row, and you’ll liberate up to 1780 litres.There is going to be a price to pay for this extra flexibility, mind, and while exact figures are yet to be confirmed for the UK, Peugeot has said a £1600 premium over the comparable saloon is probably in the right ballpark. So for this 178bhp, GT-Line petrol model - which is expected to be the most popular variant back in Britain - you’re going to be looking at a before options price of £32,830 or thereabouts. 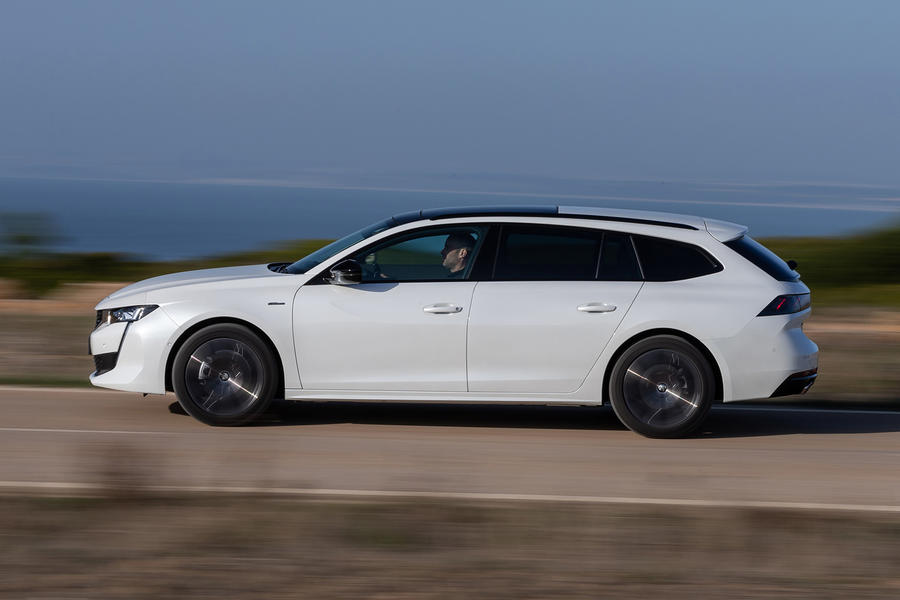 Suitably plush and visually appealing, in the exact same slightly alternative but refreshing manner the saloon is. Peugeot’s i-Cockpit originally got a bit of a kicking when it first started appearing in the smaller 208 supermini and 3008 SUV, but in the 508 it just seems to work.

There’s no shortage of adjustability in either the driver’s seat or steering column, and you can position yourself much lower down in the cabin than you could in those aforementioned range-mates. The dainty steering wheel makes for easy viewing of the 12.3in digital instrument cluster, which is itself graphically rich and easy to read - there’s no squinting required here. Peugeot has selected a fairly choice range of interior trim treatments for this GT-Line model, too, with wood panelling on the centre console and dash fascia looking especially classy, if not particularly pleasing to the touch.

The roof-line’s growth spurt means there’s now a comfortable amount of headroom in the rear, too. Even relatively lofty individuals shouldn’t experience much in the way of discomfort here, although the same trick hasn’t been pulled with regards to legroom. Unfortunately, this is still just as tight as it is in the saloon. Still, for a family with two, perhaps three kids to cart about, the 508 SW more than passes muster.

And that’s certainly no bad thing, because the elongated Pug’ is still just as tidy to drive as ever. There’s an impressive suppleness about the manner in which the 508 SW’s MacPherson strut front- and multi-link rear suspension deals with undulating road topography. Compressions are progressive and comfortably cushioned, while vertical travel in the opposite direction is kept closely under control over crests, too.

Select Sport mode and optional adaptive dampers tighten up the Peugeot’s body control even further, whilst also sharpening throttle response and adding a more athletic amount of weight to the steering. That steering is suitably quick off centre, too, and lends the car a reassuring sense of agility. While I wouldn’t go so far as to say the 508 SW feels like a genuinely entertaining car - even on the twisting coastal roads that made up our Portuguese test route - the additional handling confidence Sport mode seems to instill in the car’s chassis is by all means welcome.

It’s pretty tidy out on the motorway, too. Comfort mode adds an even greater degree of cushioning to the 508’s already pliant ride, while the 1.6-litre four-pot ticks away in an impressively urbane fashion. That motor lends the Peugeot a respectable turn of pace, too, pulling enthusiastically and from 2500rpm.

It’s shaping up to be quite an enticing package, this. But that’s not to say it’s ointment is entirely fly free. The eight-speed automatic transmission, for instance, is a bit too eager to revert back to shifting gears itself after you’ve tugged one of the paddles, even in Sport. And while there is a dedicated manual setting, it’s accessed through its own drive mode, so you lose the benefit of the sharper powertrain response and improved body control if you want to exercise total authority over the gearbox. That said, those who like to tow things behind their D-segment estate - there’ll likely be quite a few of them - will find Manual mode useful for reigning the Peugeot’s speed in when travelling downhill.

Having driven the 508 saloon in the UK, I’m also inclined to believe the SW might be afflicted by the same at-times crashy secondary ride, although on smooth Portuguese roads these intrusions didn’t seem quite as pronounced. That might also have something to do with our test car’s smaller 18in alloys. 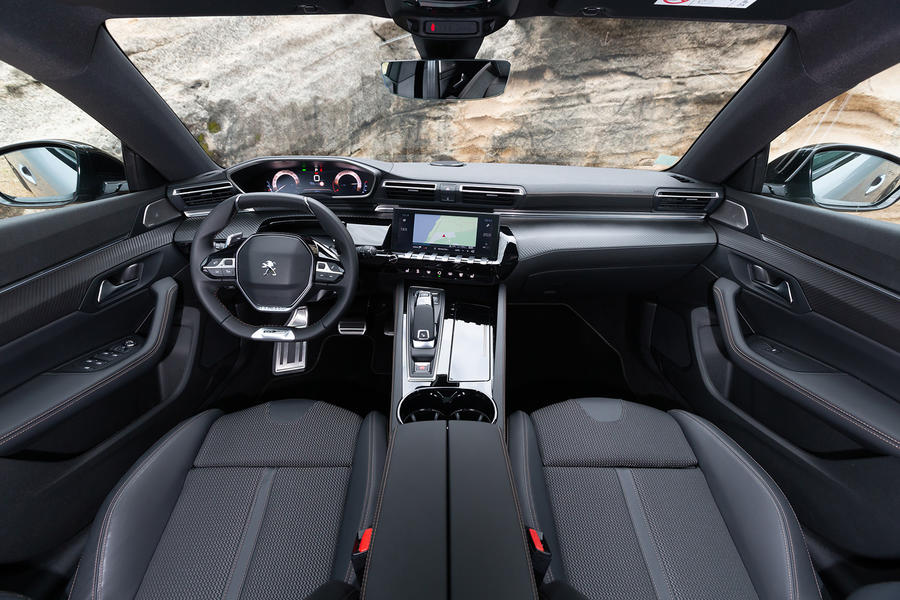 In the same way I was a fan of the 508 saloon, so too am I fond of the estate. Even more so, in fact, because as a visual exercise I think it’s excellent.

Of course, there are are more well-rounded and dynamically engaging estates out there (we have pretty high hopes for the new 3 Series Touring); and there are certainly more affordable ones, too. But as a left-field alternative to the likes of the Audi A4 Avant and Mercedes C-Class Estate et al, the Peugeot will certainly have its fans. 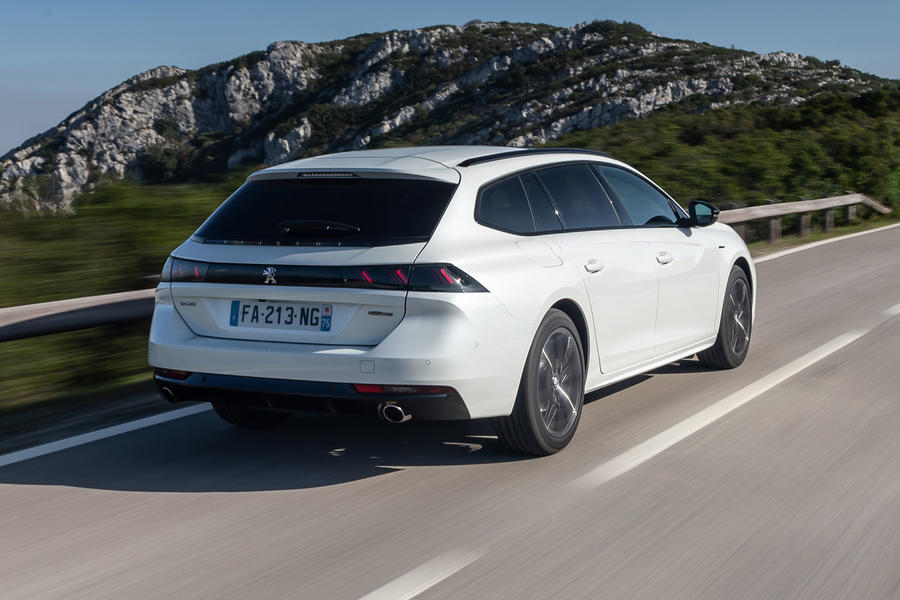 PSA Group need to get real on pricing and market position. The 508 is very nice but at best this is a Mondeo, Insignia, Passat rival. It's not aspirational junior exec 3-series, A4 and C-Class level. Perhaps Peugeot hopes it will occupy the similarly expensive market position as the alternative Volvo S60/V70 and Alfa Romeo Guilia. Both nice cars below the top three brands. It brings to mind Subaru UK as a classic example of stupid high pricing = low sales. It's just greedy and the public won't fall for it. Makes me wonder who comes up with the price points. Residual value will play a big part for fleet and PCP deals. I really want Peugeot to return to the glory days of the 505 GTI which was a great value car.

Check out more ice chests like Yeti  on the market.

This is a SUV era. D-segment shrinks. PSA chose to breathe new life is this class by offering style, substance and ..... lots of space. In case one complains "but it can't haul six friges!" buy another class leasing Peu, the Rifter. Problem with that name? Buy a Transit. Peugeot's Tavares couldn't care less.