From £22,1297
Still cuts a dash next to most compact SUVs, but it isn’t the slickest, quickest, roomiest or best-value plug-in option in its market niche. PHEV a mixed bag to drive.
Open gallery
Close

The styling changes brought along with the big mid-life facelift for Peugeot’s smart-looking 3008 compact SUV - European Car of the Year back in 2017, as they casually remind us -  have wisely been kept quite few in number and minimal in impact. New headlights, a new front bumper, and a new radiator grille with an extra-streaky plastic surround is your lot really.

On a higher-end ‘GT’ or ‘GT Premium’ model you can now order a suspiciously fashionable ‘black pack’ dressing-up kit too, which replaces much of the car’s exterior brightwork with dark chrome and glossy black bits. I’m not sure you would; but the good news is that those who do will immediately make the ‘murdered out’ look (which has become an annoyingly popular trope of premium car design) laughably uncool now that even French compact SUVs can have it straight out of the showroom. Thank heaven, and small ‘merci’s, for that.

There’s just enough styling content included here that owners of the pre-facelift 3008 might spot the difference and feel inclined to get their wallets out; not so much, though, that it’ll make the old version instantly look dated to the wider public. It’s pretty well-judged, then. I don’t go a bundle on the fussy streaky bits around the aforementioned grille, but even with them the car still looks neat and distinctive, as a Peugeot should.

On the inside there are a couple of fresh seat upholstery schemes (our test car had the new ‘Mistral Colyn’ part-leather seats) and some new decorative trims (which our test car didn't have). Although the architecture of the dashboard remains unchanged, there’s an enlarged touchscreen infotainment system, as well as an updated set of digital instruments, and some new driver aids.

The ‘meat’ of the facelift is to be found amid the car’s engine lineup, which now includes two plug-in hybrid options. Just like the related Vauxhall Grandland X, the 3008 can now be had as a ‘Hybrid 225’  - or as a ‘Hybrid4 300’ if either you or your employer is feeling particularly 'riche'. The latter combines Peugeot’s 1.6-litre turbocharged petrol engine with two electric motors and four driven wheels, and narrowly squeezes into the UK’s six per cent company car tax band at least until April this year.

The former, however, gets only one of those electric motors and front-drive, scoring a ten per cent ‘BIK’ rating on account of its marginally reduced electric-only range, but coming to market from just over £37,000. Still not exactly a song, though, is it? To me it makes a £35k Skoda Superb iV Estate look like the bargain of the year - although exactly how manufacturer list prices on any given new car may change as of January 1st 2021 is anyone’s guess. 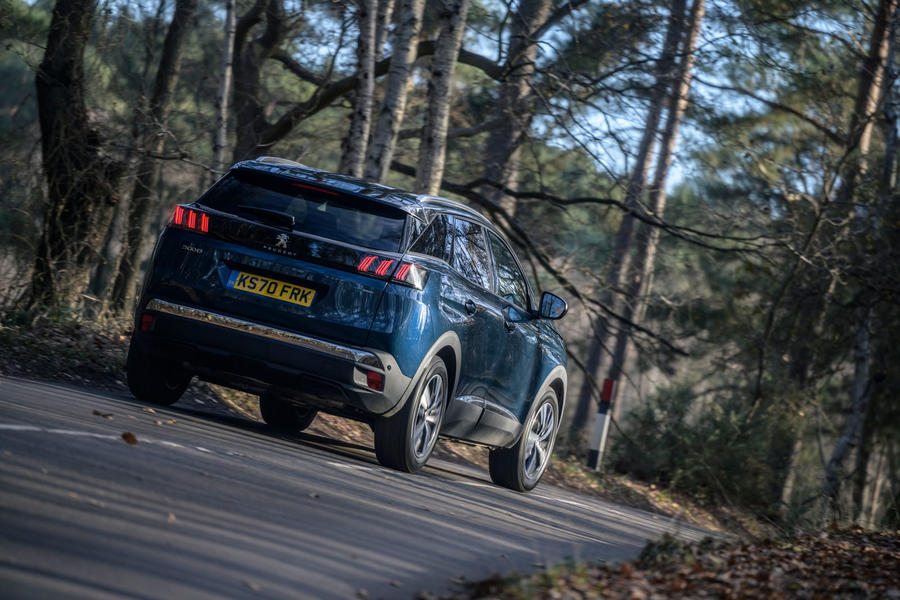 We elected to test Peugeot’s lower-powered hybrid, which offers a decently refined driving experience with plenty of outright pace, and returns reasonable outright fuel efficiency even on a flat drive battery (42mpg at a 60- to 70mph motorway cruise).

The 13.2kWh drive battery is quite generously sized for a plug-in option at this price point, but the near-40-mile electric range it promises according to the WLTP lab test is to be regarded suspiciously. Our test car - a mid-spec example on standard 18in wheels only - indicated just 22 miles on a full charge, although it covered every one of them with a little change on a mixed test route.

With the layout of this car’s drivetrain pushing both electric and combustion power through the same gearbox, there’s just an instant’s hesitation when easing off the mark in electric mode. There is a certain suggestion of unresponsiveness about the way the car’s powertrain responds to the accelerator across the board, in fact; it’s a little bit slow to restart the engine, and then downshift to a useful gear, when you suddenly need a hit of power. ‘Sport’ driving mode (which keeps the pistons reciprocating while the car is moving) mitigates the flaw, though, although the engine does sound a little bit strained and resonant when working hard.

Brake pedal progression is a little bit spongy, and drive engagement isn’t always perfectly smooth if you’re in a bit of a hurry to get anywhere. Give the car more time and gentler pedal inputs, though, and it copes better.

The car’s chassis conducts itself without offending in any serious way, but it isn’t one that likes to be hurried any more than the powertrain is. The 3008 Hybrid 225 feels moderately firmly suspended but always heavy, and its anti-roll bars definitely seem to be working harder than its springs. It corners neatly enough, goes where you point it and resists lean pretty well; but it rides in busy, restless and slightly leaden fashion on anything less than a smooth surface, shuffling laterally a little at speed and diving into ruts and compressions on occasion.

Aside from some familiar reservations about the driving position (I’m tall, but found the car’s footwells shallow, the seatback a bit short, and the steering wheel imperfectly positioned), the 3008’s interior remains attractive and inviting. Passenger space is a bit mean compared with some rivals. The touchscreen infotainment system works reasonably well, though, thanks to Peugeot’s ‘piano key’ menu shortcuts. Although the digital instrumentation screen has some slightly contrived display modes, you can find one with a pair of traditional clocks without much trouble. 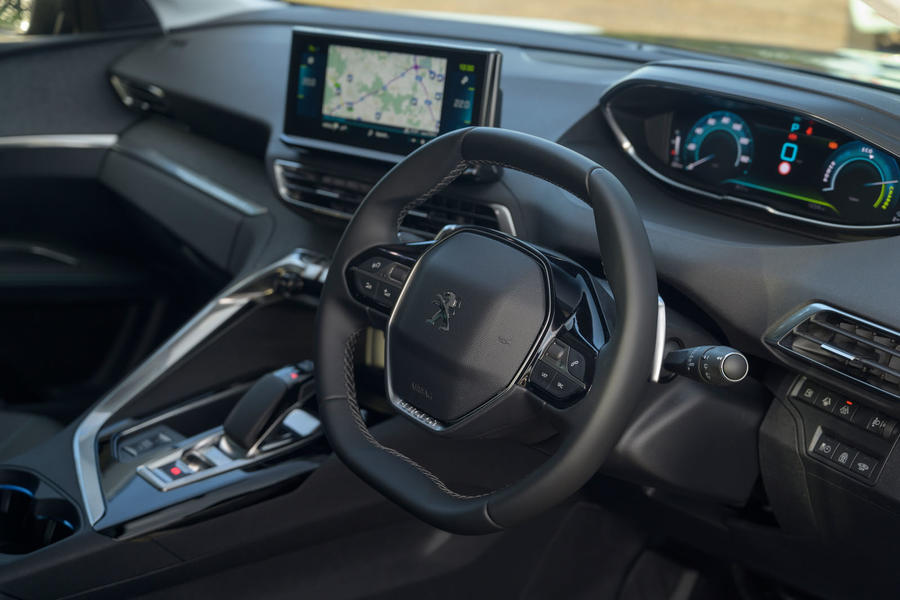 In light of all that, I don't think I'd be in such a rush to trade in my petrol- or diesel-engined 3008 for a hybrid. Given the option, and at this price particularly, I think I’d bide my time.

The 3008 Hybrid 225 is handsome, usable and quite 'real-world' efficient, so it won’t give owners too many reasons to regret, especially if it ends up being your next company car. But I suspect being ‘affordable-ish‘ and ‘okay to drive’ will only take it so far in a plug-in hybrid market that is only going to get busier. 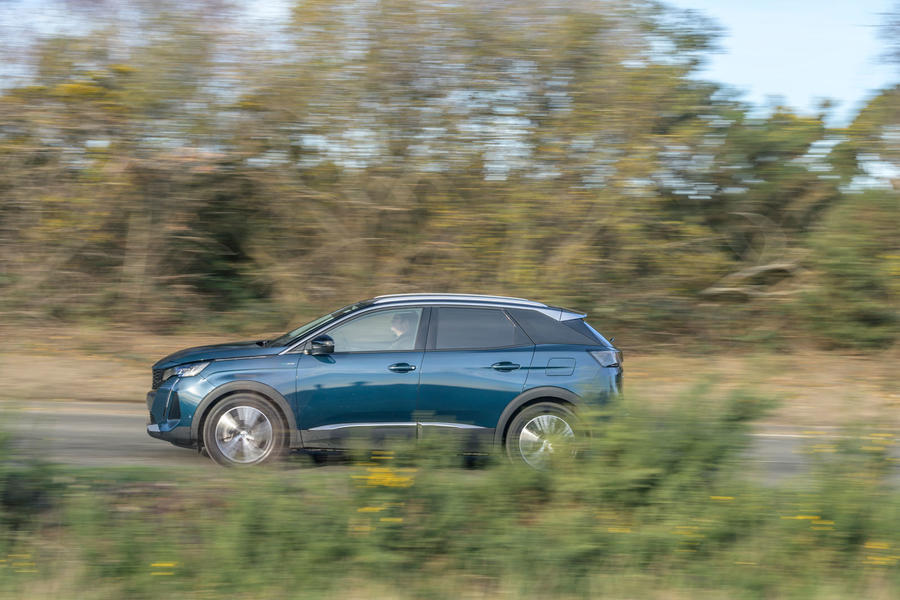 Peugeot renewed and added some chunky wheelarches to the previous gen 3008 and 5008 MPVs, calls them SUVs even though they are strictly FWD (except for the PHEV), and sells them well. Fiat had a proper 7-seater rugged AWD SUV in the Freemont/journey, with a long bonnjet and pulled it from the market because "MPVs don't sell"

Mighty fine car.Good sales volume in Europe for the 3008, Grandland and DS7 Hybrids.

After 22 miles expect 35 mpg at 70, you also expect to pay over 8 thousand over the top compared to the ice version, such is progress.