8
Mini’s new electric hatchback won’t break records on range or usability but has plenty of brand-typical zip and driver appeal. Isn’t bad value relative to other EVs, either
Close

Another weeknight, then; must be time to read about another brand-new electric supermini - and this time it's a British-built one, the Mini Electric. If somehow you haven't already concluded as much, or you've been living under a solar panel, 2020 is definitely looking like the year to finally replace that second family car with something more socially responsible.

That's because a glut of slightly pricey but virtuously sustainably powered, all-electric compact hatchbacks is about to emerge onto the UK market, as Volkswagen, Honda, Peugeot and Vauxhall all finally get around to becoming fully paid up members of the the zero-emissions club. Renault, Smart, Hyundai and Kia, meanwhile, have all busily refreshed and updated their runners and riders.

Most of these newbies are set to cost roughly the same amount of money, of course, and most will be positioned in much the same way. So will the sudden rush in supply be met with an equivalent and lasting appetite to adopt? Suffice it to say, the industry will be watching very closely indeed. But if any one car-maker in the incoming pack already has pedigree in making major commercial hay with a premium-priced small car, and might therefore be best-placed to simply carry on doing so, it’s probably the one we haven’t mentioned yet: Mini.

BMW’s most famous British export brand has proven time and again over the last two decades that it can find buyers for its cars for even more than the kind of cash that it’s about to ask for the new Mini Electric – and that’s without a public mood of social responsibility driving customers towards those cars in quite the same way that is about to benefit this new one. Rather than whether it will actually sell, then, the bigger question encircling the new Mini Electric might actually concern whether it is quite the usable modern EV you may be hoping or waiting for. The Mini Electric is, at a basic level, a three-door Mini. Its lithium-ion drive battery does nothing more serious to impact on practicality than very marginally raising the height of the car’s rear seat cushions. Even so you clearly wouldn’t call this one of the more versatile or accommodating EVs on the block.

Under the bonnet it adopts the same 181bhp, 199lb ft electric motor that powers the BMW i3S – except that it’s powering the Mini’s front axle, of course, rather than the BMW’s rear one. It's BMW's patented ‘hybrid synchronous’ motor design, which delivers greater power density than most electric motors by combining within its rotor design the effect of permanent magnets with something called the reluctance effect, which cuts down on the need for heavy ‘rare earth’ materials like Neodymium within its construction. That, in turn, means the rotor can be lighter, and so it can spin faster and produce power over a greater range than most electric motors manage.

The other mission-critical component of the car’s powertrain may well be considered to be its drive battery, which is T-shaped and fits under the back seats and along the transmission tunnel. It is as large as the space for it to be carried within the Mini’s chassis allows, and has usable capacity of 28.9kWh.

That’s not a particularly competitive figure, however, in a market in which both the Renault Zoe and Peugeot e-208 offer close to 50kWh. The Mini’s engineers claim that the need to meet global market homologation and safety regulations made it impossible to squeeze any more electrical storage into the car (both the Zoe and e-208 are predominantly European-market cars) – but they also claim that all the market research suggests a WLTP range figure of 144 miles will meet the daily motoring needs of Mini owners with room to spare. Beneath the outward insistence, though, the acceptance that this is a key vulnerability for the Mini can perhaps be inferred from the car’s pricing. It’s available from a lower start price than its opposite numbers from Peugeot, Vauxhall, Kia and Renault: undoubtedly an unfamiliar but not uninteresting position for any Mini to find itself in.

Away from the spec sheet and on roads around Miami, where Mini chose to introduce the Mini Electric to the global press, that 144-mile range claim looked more like a real-world 125 miles on a good day, mostly in heavy and slowish traffic. On a quicker, chillier UK motorway commute, I suspect you’d be pleased to get 100 miles between charges. And purely in light of the fact that you can have a similarly sized rival for similar money that’ll go 50 per cent further between charges – and also needn’t spend that much more for a genuine 250- to 300-mile electric car – that will undoubtedly be a problem for a certain kind of rationally minded buyer.

Less dispassionate customers ought to be open to persuasion by the car’s driving experience, however. Partly due to that relatively lightweight drive battery, the Mini Electric has a power-to-weight ratio of better than 130bhp per tonne, where neither the quickest Zoe or the e-208 gets much beyond 90, and the Kia Soul EV – which is itself a pretty fleet-feeling car - doesn’t top 120.

Having driven the Mini mostly in heavy congestion where it was seldom possible to get it above 60mph, I’m not convinced it feels like a car with a strong performance selling point, at least over other comparable EVs – but it’s certainly no slouch. Like all cars of its kind, it’s at its most brisk from rest up to around 50mph, where it has plenty of urgent response to bigger pedal inputs, albeit not quite as much instant torque as some.

There’s enough grunt available above 50mph for the car to easily mix it with quicker-moving traffic, though, and there is fun to be had in digging into the accelerator pedal and feeling the car whizz away so keenly, and with such little apparent inertia. It’s something of a shame that Mini didn’t think to engineer in some more genuinely mechanical motor noise for extra audible charm; as it is, the only notable sound that the car makes is that generic low-speed digital whirr that all EVs sold in the EU must now emit for pedestrian safety reasons. Even that could have been more imaginatively conceived.

The additional mass that the car carries (not quite 150kg more than the Cooper S auto three-door, which could be worse) helps to lower its centre of gravity by 30mm (versus the same sibling rival), and really didn’t blunt the Mini’s flat, agile and immediate handling appeal – as far, regrettably, as it could be assessed on our busy city test drive.

The Mini Electric’s lateral grip is strong, and its handling responses are as keen as those of any of its rangemates. On better roads than we had on which to enjoy it, I daresay it would be plenty of fun. It also clearly doesn’t rely on low rolling resistance tyres to boost its electric range, and has that unmistakably impish Mini-brand dynamism to bolster its driving appeal. It doesn’t feel particularly heavy to drive either, as a great many electric superminis can, with taut vertical body control. If anything, the extra mass it carries seemed to dampen and flatten the car’s low-speed ride better than Mini’s prevailing comfort standard, and to quite agreeable effect. 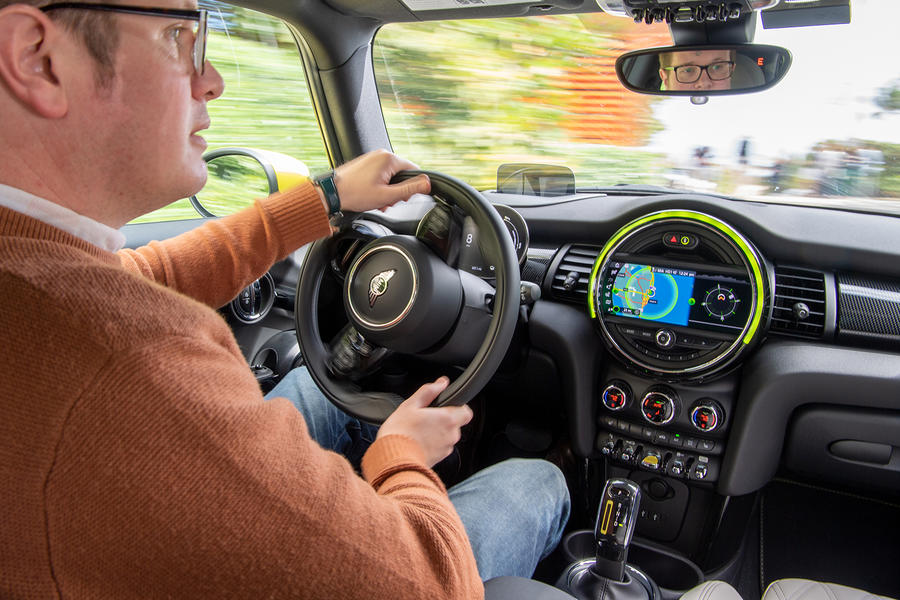 Exactly where all that leaves this clearly desirable, energetic and engaging car, which has some equally apparent limitations on everyday, any-occasion usability, will require closer inspection to be sure about – but my hunch is that the Mini Electric will bring a bit of much-needed complexity, or light and shade, to the developing EV scene; and a bit of genuine and very welcome choice.

It clearly won’t be the most rounded, practical or usable option in what promises to be a mercurial market segment this year - but, on this evidence, it will drive like a Mini, and so it’s ready to put an extra dose of fun into the zero-emissions class. 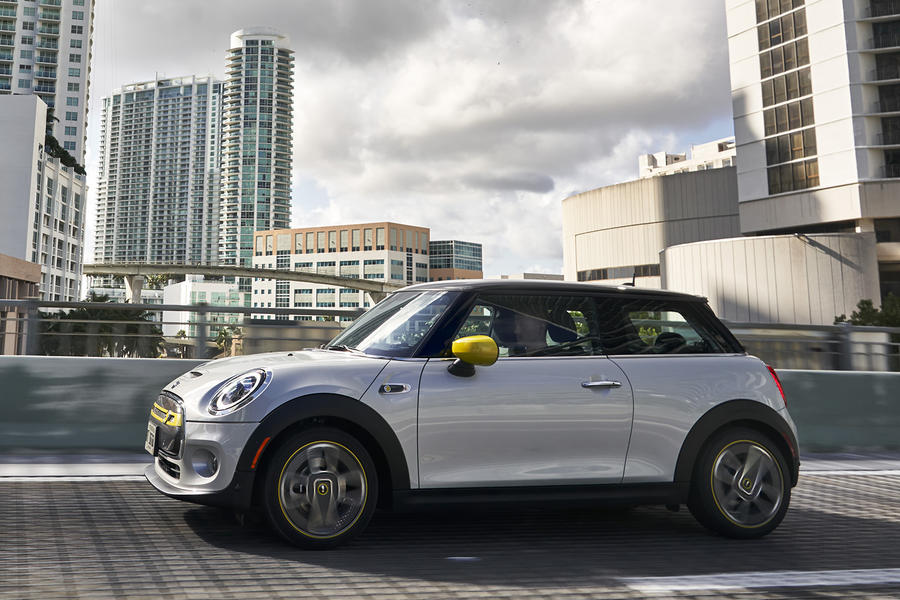 Much as I detest the awful pastiche New Minis have been since their launch in 2001, I have to defend BMW here - theyve converted an ICE car to electric, given that, more range as you suggest simply isnt possible. I m sure in the future as battery tech progresses a battery upgrade will be available.

Missing you...oh so very much.

Missing you...oh so very much.

Yes, we all missed your vital contributions.

Hopefully you’ll devolve enough to lose the ability to type with your formed digits, and go back to the depths of the cesspit you’re from, you waste of natural resources.

Ugly grille, ugly taillights, ugly wheels, ugly dashboard - unlikely to be sold on its visual appeal and, with an indifferent range, it is also short on practicality.

The entire Mini range looks so tired that I dont believe mere evolution can successfully take the brand to the next generation.

Ugly grille, ugly taillights, ugly wheels, ugly dashboard - unlikely to be sold on its visual appeal and, with an indifferent range, it is also short on practicality.

The entire Mini range looks so tired that I dont believe mere evolution can successfully take the brand to the next generation.

The problem is they don't have your knowledge and expertise in automotive design. They would know how to design cars properly if they did!

Surprised it's cheaper than

29 January 2020
Surprised it's cheaper than the honda e, and with a slightly higher range, this, I reckon, is the Honda's biggest competition, both are fashion accessories bought for mainly town use, I have no idea which will fare better though.

Yes, it's a 21st Century Mini, it's not to pricey, and folk love them, I wouldn't buy one for my reasons,that's my choice,and finally, there, I've stayed on topic till now, I do wish some posters would do this because it rather boring and juvenile to take critique others whom they think aren't there equal.

Range may be less of a factor

Range may be less of a factor here than people think. Many people like me have a family car for the weekends and carting the family about and a small car for the one in the family that does short journeys every day commuting to and from work or the train station.

For me range is secondary. Residuals and interior design are primary however. Mini in my experience is the class leader in both areas. So my next car may well be this one.